Let’s be honest, travel-lovers: hanging at the airport and flying high is almost as fun as being at your destination!

Story and illustration by Simon Vaughan

Everybody loves a list. Whether it’s the five-best or the ten-worst. Fattening fruits, vegan vegetables, exorcising exercises or diets-to-die-for. Whatever the topic, lists rarely fail to grab our attention.

And nowhere are lists more popular than in travel. We all love to compare our own likes and dislikes with someone else’s, and we like to learn what’s new and trending or old but worth revisiting. Whether destinations, vantage points, eateries, day tours, hostels, national parks, hiking trails or doctors who don’t ask too many questions, travellers undeniably love lists.

Generally, the more we travel, the longer our lists become and the more discerning we become. What seemed cool the first time may not be quite so hip 10 trips later. Sometimes we seek bigger and better, while other times it’s the smaller things that win our hearts, minds and pocketbooks. 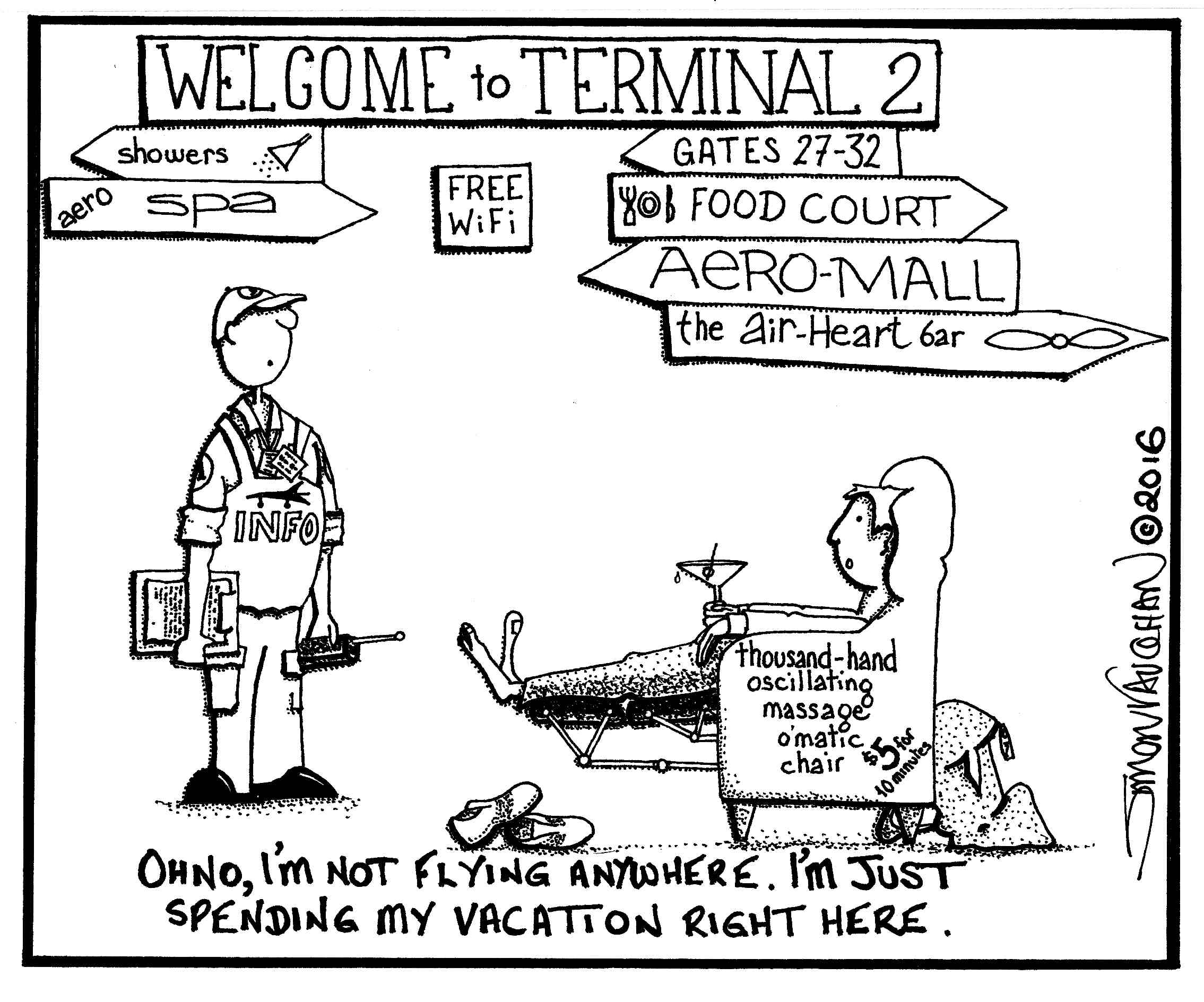 Just like everyone else, I have scores of favourites and a few dislikes, although in a very general sense—and as someone who embraces change and enjoys being challenged—there’s little about travel that I don’t like. Barring lost luggage, food poisoning and those enormous plastic travel mugs at all-inclusives.

Somewhere I have a list of all the airports I have been too. (Yes, I know: very travel-geek). The last time I checked, it had topped 100. Many have been big, shiny international hubs, while some have been one-room (and in a few cases no-room) affairs. As the mere existence of this list may affirm, I must confess that I rather like airports in general.

I enjoy the hubbub of movement, the rush of people dashing for flights, the paraphernalia of officialdom and bureaucracy, the drama of emotional arrivals and departures, even the faint scent of jet fuel. But most of all, I simply love the sheer excitement of going somewhere. Of going anywhere. 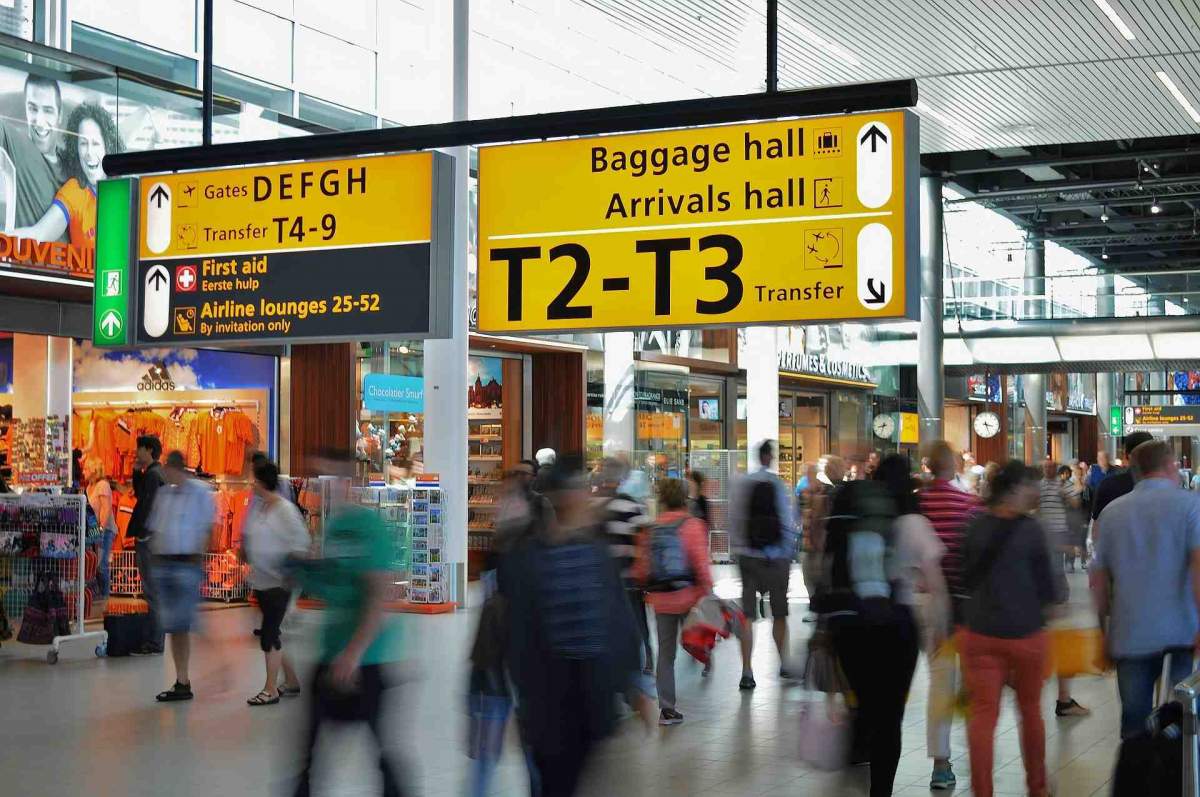 Hanging at the airport is half the fun of travel. (Rudy & Peter Skitterians/Pixabay)

The things that make airports most enjoyable for many of us likely include ease of use, efficiency, cleanliness, comfort and free Wi-Fi. Throw in some affordable places to get decent food, enough seats to while away the hours and a few luxury shops to distract us when tedium sets in, and we’re good to go.

When I first began travelling, it was likely the airports with these features that I counted among my early favourites; but now it’s more often something else that earns a gold star. While I’d be hard-pressed to create a definitive list of my aero-faves, there are a few to which I imagine I will always be very happy to find myself headed.

One of those is undoubtedly LAX: Los Angeles International Airport. Hollywood. Beverly Hills. Rodeo Drive. Santa Monica Boulevard. How could an airport in sunny California that acts as a portal for all the movie stars in the world not be absolutely awesome?

Well, actually, LAX isn’t awesome. In my experience it’s rather ordinary and even disappointing. You’d expect it to have gold-plated taps, red carpets, gourmet restaurants and be overflowing with designer boutiques, but it isn’t.

You’d also expect wall-to-wall celebrity sightings, but that hasn’t been the case for me during numerous trips through at least four of its many terminals. Unfortunately, LAX is a very ordinary airport with a choice between a Wolfgang Puck, a Burger King and a Starbucks. As for movie stars, friends of mine have spotted both Will Smith and Robbie Williams, whereas I have seen just one celebrity in more than a dozen trips and that was Peter Gallagher. As recognizable as he may be to some (TV’s The O.C. and Covert Affairs, or my particular favourite, Summer Lovers with Daryl Hannah!), I’m afraid to say he’s not exactly Arnold Schwarzenegger, who I actually did bump into once—not in LAX but on a sidewalk in Toronto!

Peculiarly though, I’ve seen Peter Gallagher on two separate occasions in LAX, and a third time in a restaurant in, yes, you guessed it, Toronto. Clearly he’s stalking me.

However, it’s none of that which has granted LAX a special place in my travel heart. The reason for its inclusion comes not in any of its terminals, not beneath the swaying palms that line the car park, the endless lines of tinted-windowed black SUVs that pull up to its doors or even the instantly recognizable UFO-like former restaurant that looms above the property.

No, it’s because when you take off and start climbing with Venice Beach out of one window, Catalina Island out of the other, and the sun bleeding into the Pacific all around, you know that your next stop more than a dozen hours later will be somewhere spectacular like Sydney, Auckland or Fiji. And that for me, makes LAX one of the best airports in the world.

Fortunately, if you’re going to spend days flying to the other side of the world you’ll be relieved to know that I am equally fond of SYD: Sydney (Australia) Airport. 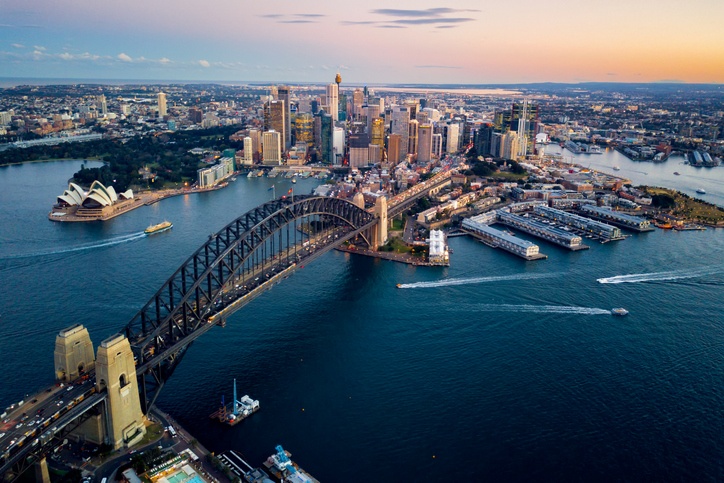 Sydney Harbour, with its famed bridge and Opera. (Yiran An-iStock)

Sydney is a very nice airport. It’s comfortable, clean, has places to buy Vegemite sandwiches and stores offering UGGs, inflatable kangaroos and hats with corks. The staff are friendly—even security and Customs are nice, though still eminently professional—and they have the coolest drug-sniffing, bomb-searching, sausage-detecting beagles you’ll find anywhere on earth.

It’s a great place to arrive after a long flight and start your Antipodean odyssey; to kill a few hours before heading off to such bucket-list destinations as Uluru/Ayers Rock or the Great Barrier Reef; or to very reluctantly head home through after an awesome walkabout.

But for me, the thing that puts SYD on my ripper list is the view you get when you take off from the right runway at the right time of day.

You’ve settled into your center seat ready for the long haul home or a short hop to your next highlight when you glance up and there, perfectly framed in the window is the sensational sight of Sydney Harbour, complete with the Opera House and the Sydney Harbour Bridge.

There’s no bad view of that harbour, but the one from high up as the setting sun glints on the sails of the Opera House and sprinkles gold across the surrounding waters is simply spectacular, enough to send shivers down the spine of even the most cynical of travellers. And for those few seconds of voyeuristic heaven, Sydney will always be near the top of my mental list.

I love Nairobi for its sense of adventure—and its ever-present scent of mosquito repellent; Harare’s domestic terminal for the staff’s morning routine of standing on the baggage scales to weigh themselves before work; Helsinki for the pink-glazed donuts(!), and Rome for the fashion sense of, well, everyone.

I love the distant skyline of Manhattan from LaGuardia, and any airport in Canada when it welcomes me back from long and tiring travels abroad.

But there’s one small airport on a southern isle that is currently calling me particularly loudly.

Juan Manuel Gálvez International Airport on Roatan, Honduras (RTB) is the sort of airport in which the sound of the dented fan blades grinding inside the paint-chipped air-conditioning unit that hangs menacingly from the ceiling is louder than the public address system.

It’s the sort of airport that has so many shops that if you blink you’ll miss it, and be unable to pick up one of the hundred souvenir plastic fridge magnets on offer. It’s the sort of airport where the airport’s single firetruck is likely to make more appearances during the three hours you’ll be in the building’s only international departure lounge, than any arriving or departing aircraft, and the sort of place that when an aircraft does appear the entire airport staff congregate to watch.

I have nothing against any of those attributes. In fact, they’re the sort of things I like most about travel. But the reason for my deep love for RTB has less to do with A/C units, quaint shops and a sleepy schedule than it does sandwiches. Oh yes. Big submarine-style sandwiches. On freshly-baked, two-foot long buns. Brimming to the top with generously-sliced wedges of cold cuts, thick slabs of fresh, juicy tomatoes, crisp green lettuce leaves and a drizzle of fresh, creamy mayo.

The sort of sub that is so heavy, you’d be charged excess baggage if you tried to carry it on to the plane. The sort of sub that once consumed, you have no choice but to stretch out your legs, pull your baseball cap down over your eyes, scratch your stomach and doze off to the hypnotic oscillations of the overhead fan. And best of all, they’re not only made fresh to order and slid through a secret hatch in the wall, but they’re cheap. By airport standards, anyway.

I loved everything about Roatan—from the jungle-clad mountains and fantastic snorkeling, to the hint of pirate history and the always smiling bow-legged hotel security guard with his low-hanging gunslinger holster and chrome-plated revolver and a waistline bandolier of shiny bullets.

But it’s the alluring memory of those subs in RTB that keep calling, and may just get me back to that little slice of paradise most quickly of all.

10 Foodie Fantasies as Told by Travellers

Excerpt | Behind Putin’s Curtain: Friendship and Misadventures Inside Russia