Like so much on the Tibetan Plateau, Thangkas, or scroll paintings, were first introduced to Tibet from outside lands.

Like so much on the Tibetan Plateau, Thangkas (known as Paubha in Newari), or scroll paintings, were first introduced to Tibet from outside lands. Nepali and Indian artisans brought with them the tradition of “drawing to document,” which found its zenith in Buddhism’s rise.

Though Buddhism was declared a state religion in Tibet during the seven-century Tubo Kingdom of Songtsen Gambo, it wasn’t until the eighth century and the arrival of the Buddhist sage Padmasambhava, that Tibet fully embraced and adopted its own version.

With its rise in Tibet, religious icons and statues were customized for Buddhist monks who travelled through the nomadic lands. Thangkas were scriptures, cultural icons and explanatory scrolls all at once, and could be unrolled and explained to audiences with little effort. The word itself, Thangka, comes from the Tibetan word Thang’yig, which refers to a written record of events. Words, figures and sites of worship were all documented.

Across the Himalayan Plateau, shrines, homesteads and communities needed to pack up or unwrap themselves within minutes, and Thangka scrolls were ideal for the circumstance. Buddhist pilgrims travelled with Thangkas slung over their backs, opening them in market centres to aid in their explanations of Buddhist beliefs. Buddhist caravans travelled widely throughout the Himalayas, and Thangkas were often offered to landowners or leaders who opened up their lodgings or regions. Monasteries themselves were at one time portable and set up in tents in order to better spread the word. 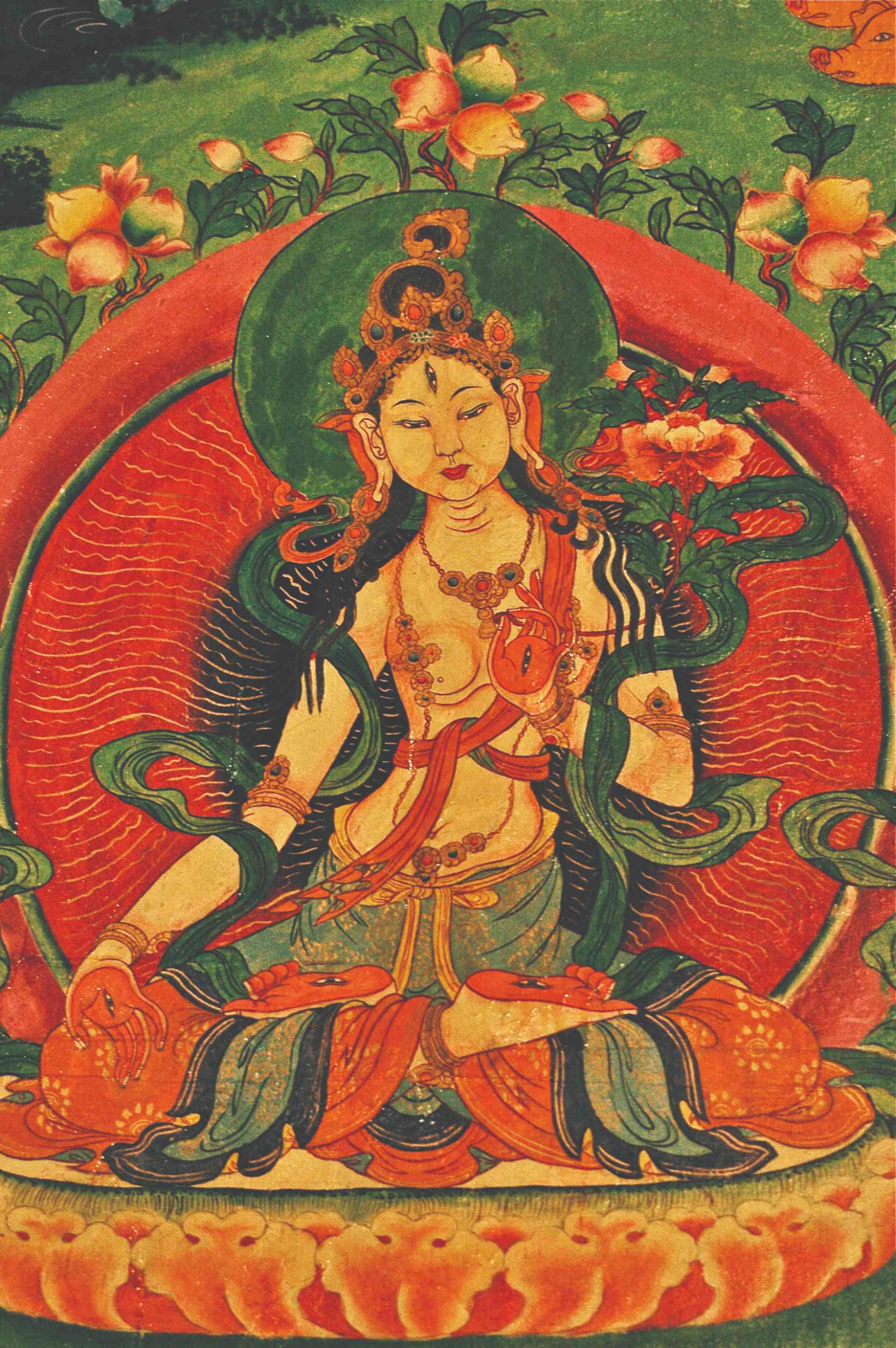 The stunning colours and intricacies of Thangka art. (Photo by Jeff Fuchs)

Within Tibetan homes, whether they were tents or solid structures, Thangkas would also be hung. In many cases, a single Thangka painting of a particular deity represented that home or family’s protector.

One of the most popular represented icons on Thangkas was the Boddhisatva (a being who seeks enlightenment not only for himself but for others) White Tara, who represents longevity, strength and health. Sometime in the tenth and 11th centuries, Hindus and Buddhists in Nepal began to illustrate not just deities but daily scenes on Thangkas, and in time they moved northward into Tibet.

Not only an art, Thangka painting—primarily painted on palm leaves, linens, silk or paper—was a major field of knowledge and study for people on the plateau. Thangkas were not only judged on subject matter, but on the masters who created them, and even the base or cloth frame material the painting was adhered to.

The base material would be stretched and fastened onto a wooden frame, and treated with a resin or gum, along with chalk. Before any ink was applied, a charcoal sketch was made, after which the master would fill in portions and have assistants complete simpler parts. The best brushes were those made from the hair of rare Himalayan wild cats (plucked from a live animal), making the brushes themselves things of tremendous value.

Thangkas are distinctive for their styles, depending on who produced the painting. The Newaris of Nepal and India, Tibetans from Amdo (now Qinghai province), Tamang and further west, and even Lamas (Tibetan Buddhist teachers), became noted and distinct creators. Communities not only considered it a religious art form, but also a considerable economic generator. Thangka practice was traditionally passed from father to son, and artists were often paid in commodities such as grain, silver, tea, livestock, or butter.

In time, elements and styles of different Buddhist traditions left their mark on Thangkas. Both Chinese and Nepali Buddhism, and even influences from further west in Persia, would be incorporated, though from its inception, the art form’s subject matter was religious in nature. 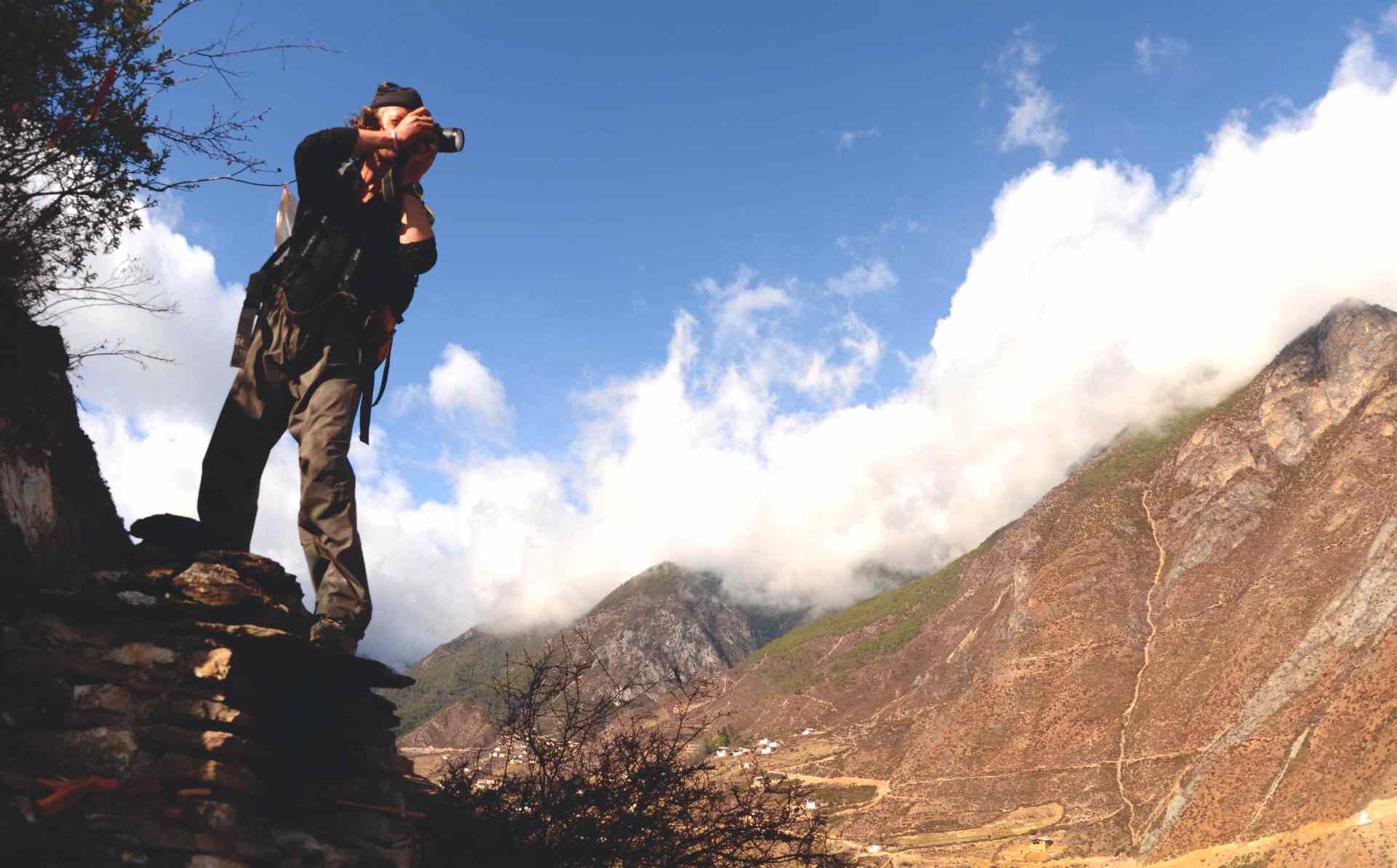 Jeff Fuchs on expedition in the Himalayan foothills.

Styles of Thangka continued to evolve with time. Brighter colours and more ornate figures—much of it based on the rich designs of Tibetan royal palaces—became popular. Many of the vibrant colours (to this day) are garnered from ground-up minerals and stones within the Himalayas. A Thangka created by a recognized master and using mineral-based paints (as opposed to synthetic) can be sold for thousands of dollars, though traditionally, Thangkas were never sold but given as commemorative gifts, commissioned, or exchanged as barter.

Thangka painting was, and still is, more a skill or craft than a religious exercise. And though rare, some schools and families on the Tibetan Plateau still teach the ancient art form.

The Wilds of Patagonia | Like No Place on Earth

Unshackled and on the Search in Southern Chile | In Patagonia