In the fourth installment of his dirty gravel bike series, where he sets out to cycle and explore the rail trails of southern Ontario, Rob Brodey tackles what he calls his most exciting yet: the Cataraqui Trail, along the famed Rideau Canal.

Imagine cycling for 100 kilometres along a dirt path that takes you through farmland and forest, marshland and alongside an infinite number of lakes. Oh, and you don’t have to compete with car traffic for space! Well, at 104 kilometres, the Cataraqui Trail has this vision beat — by 4 kilometres! This multi-use recreational dirt path runs through 3 counties from Strathcona to Smith Falls north of Kingston, Ontario, and is one of the longest continuous rail trails in southern Ontario (to date!).

No offense to any other rail trails in Ontario, but of all the paths I’ve scoped, Cataraqui Trail is the one that has made me the most excited about exploring on a gravel bike (and I was already pretty stoked about all of them!). Of particular interest is the 30-kilometre stretch that travels from Sydenham northeast to Chaffey’s Lock on the Rideau Canal, weaving its way around so many lakes that the bird’s-eye view of the landscape resembles verdant Swiss cheese.

A good chunk of this trail is part of the Trans Canada Trail, the 27,000-kilometre car-free network spanning Canada’s glorious vastness.

As I arrive in the town of Sydenham at seven in the morning, I can see an endless bank of dark clouds overhead that seems to guarantee a day of continuous rain. The upside is that I spot “Jim’s Gourmet Fries” right by the rail trail entrance and promise myself a proper serving of poutine from the chip wagon immediately upon my return. (BTW: If you’re planning to cycle from Sydenham, free street parking is available.)

Within a few short minutes of riding, the first drops of rain begin to fall, but I’m so mesmerized by the views out over Sydenham Lake that the rain is all but forgotten. Soon I’m cycling along a narrow causeway across the lake, gazing at the mist rising off the water on both sides of the path.

The rain progressively drums harder as I pedal on across marshland, where I spook a Great Blue Heron whose impossibly long, slow flapping wings make it appear to take off in slow motion. But the nature show isn’t over yet. Moments later, a deer stops on the trail in the near distance, sizes me up, then bounds away into the protective cover of the forest. 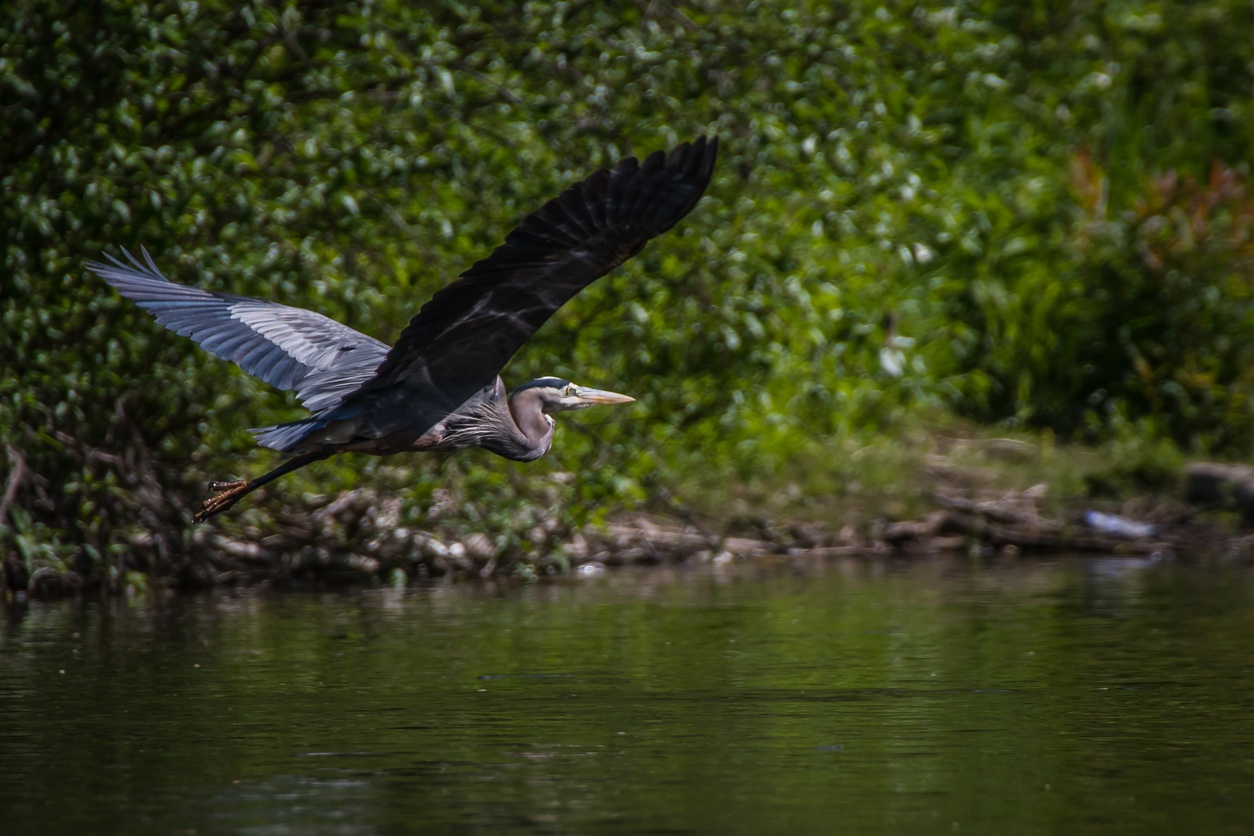 The incredible wing span of the Great Blue Heron, here flying across the Speed River in Guelph, Ontario. (Katie Duncan-Burt/iStock)

Unlike many of the other rail trails I’ve biked so far, which were in more heavily agricultural areas, this section of the Cataraqui Trail really feels like wilderness. Portions of this trail cut across the bald and rocky Canadian Shield, which is part of the nearly 4-billion-year-old core of the continent that was scraped down practically to the bone by millions of years of glacial action. (Hence, the pitted Swiss-cheese-like appearance of the landscape.)

This rugged terrain would have made construction of the rail line very serious business back in the 1880s, requiring regular blasting and pick-axing to level out the land.

As I pedal over the rough ground, my ear tunes in to a rattling sound emanating from my gravel bike. In time, I stop to search for the source of the metallic clattering, a tad concerned that I’m kilometres away from the nearest road or cottage, if I need technical assistance (my understanding is that mobile reception is spotty along sections of the trail). 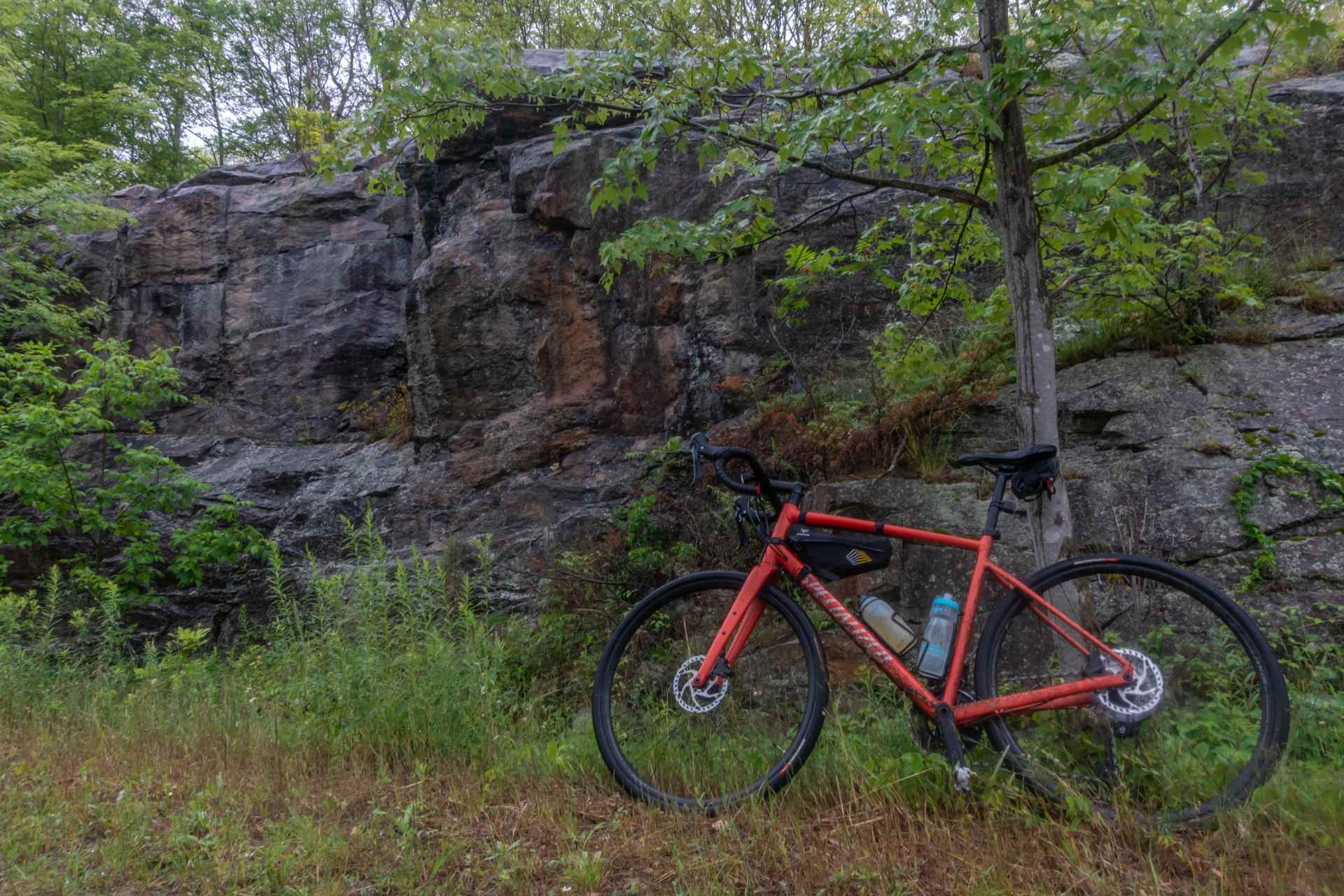 Rob’s bike resting on the bald and rocky Canadian Shield.

It turns out the screws on my water bottle cage have come loose and with a few quick turns of my multitool, the rattling ceases. But it’s a good reminder to always pack a compact toolset with hex keys, screwdrivers, and a chain-extractor, as well as a spare tube, tire levers, and a small pump.

On a technical note, some bike specialists suggest riding at the low end of the recommended tire pressure on gravel (the pressure range can be found on the tire sidewall). This allows the rubber to hug the terrain rather than bounce over it like an overinflated balloon. What you lose in rolling efficiency you gain in comfort and ground contact, which provides better bike control.  In my case, my recommended tire pressure is 70-90psi, so I keep it closer to 70psi. Anything below the recommended pressure, however, and you risk getting a pinch flat. 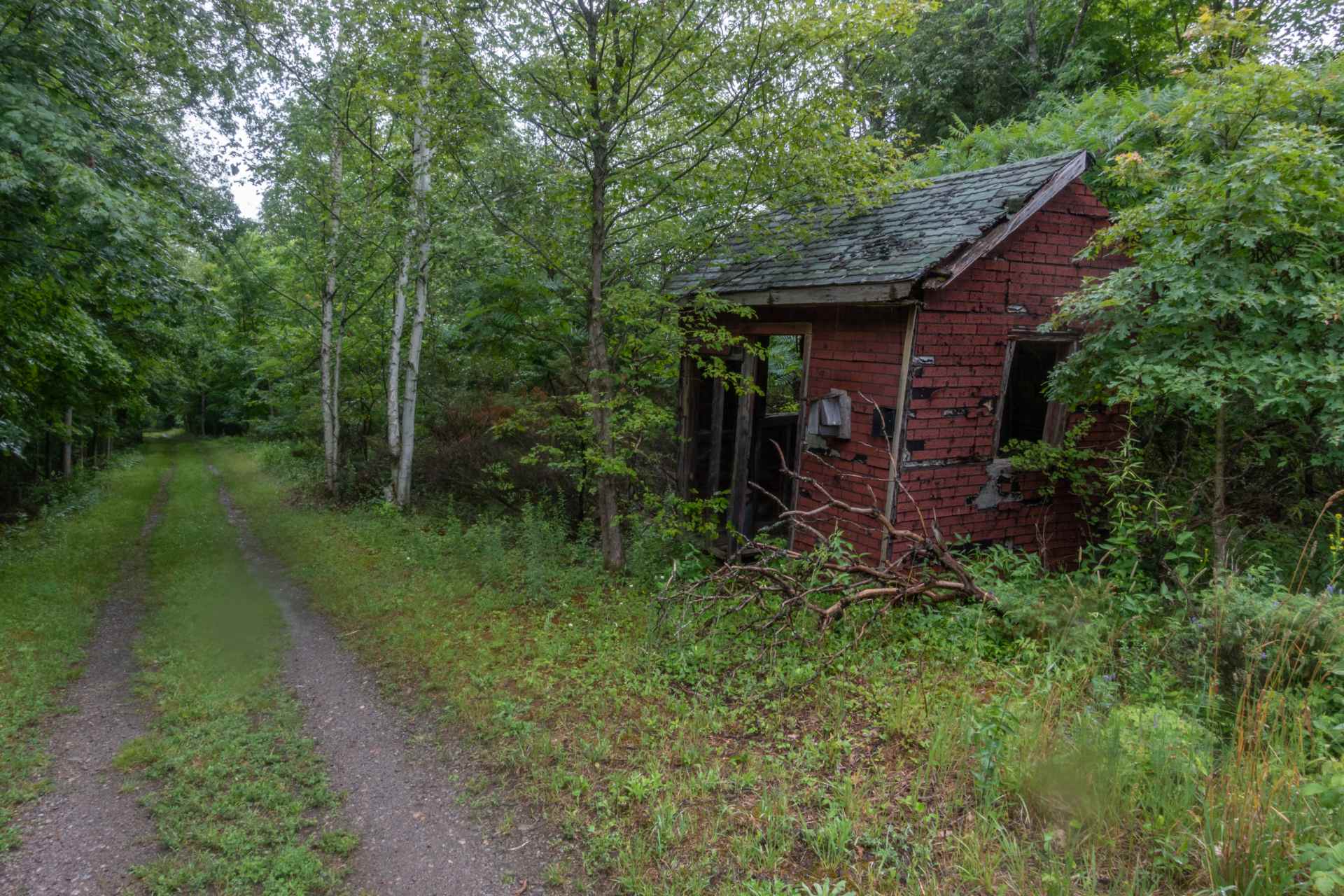 Theses photos: scenes along the Cataraqui in southern Ontario: the trail runs 104 kilometres, and is part of the Trans Canada Trail system. 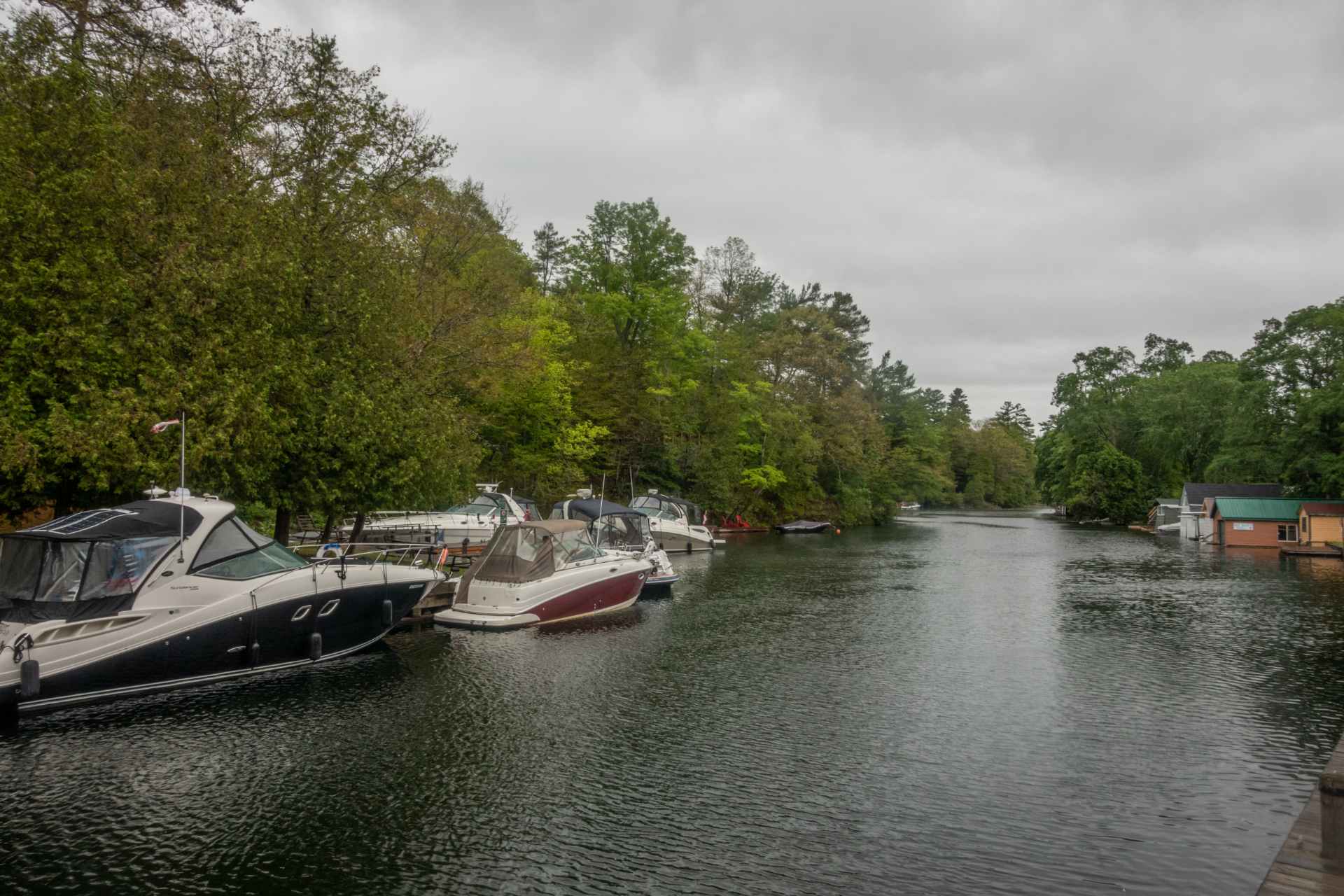 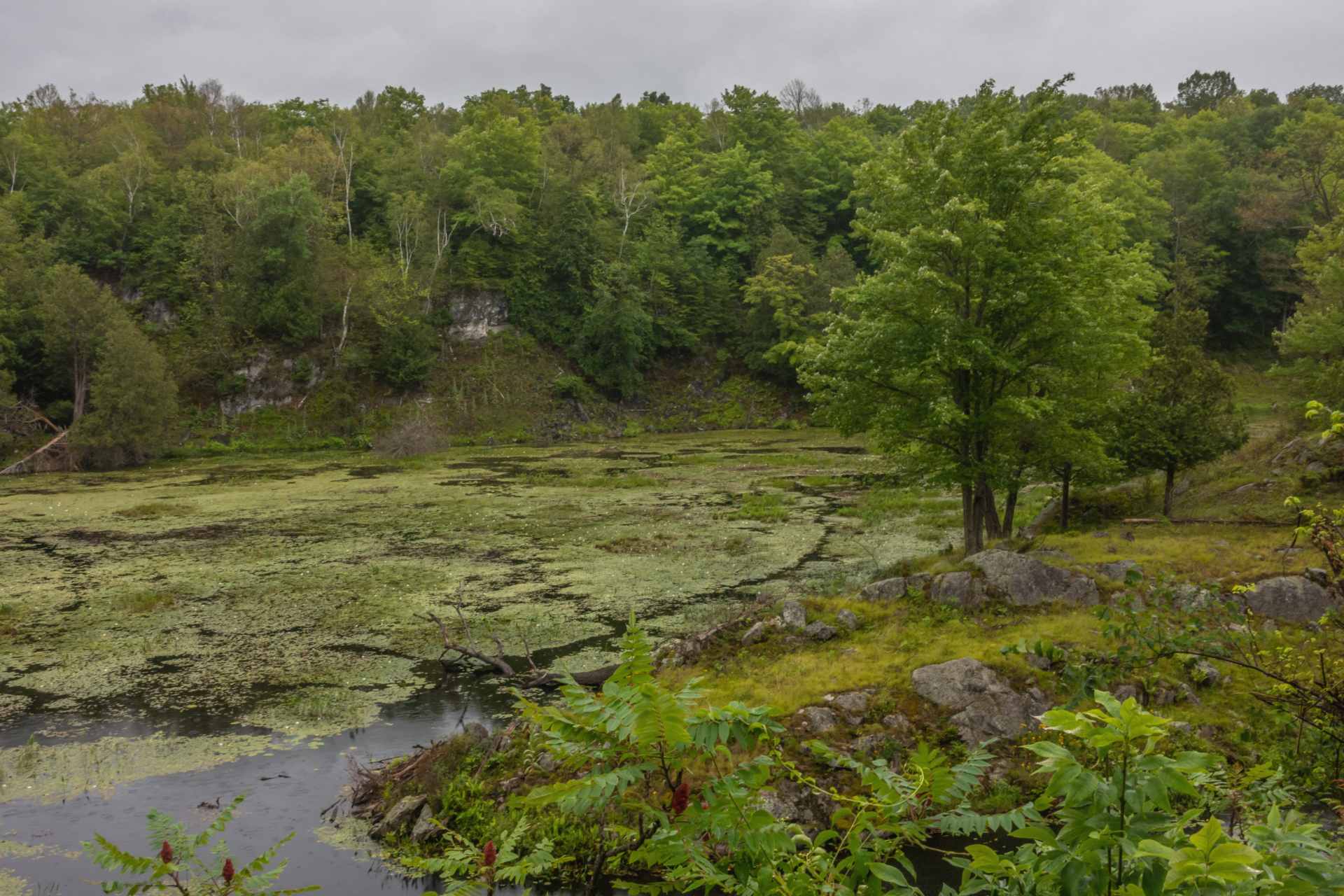 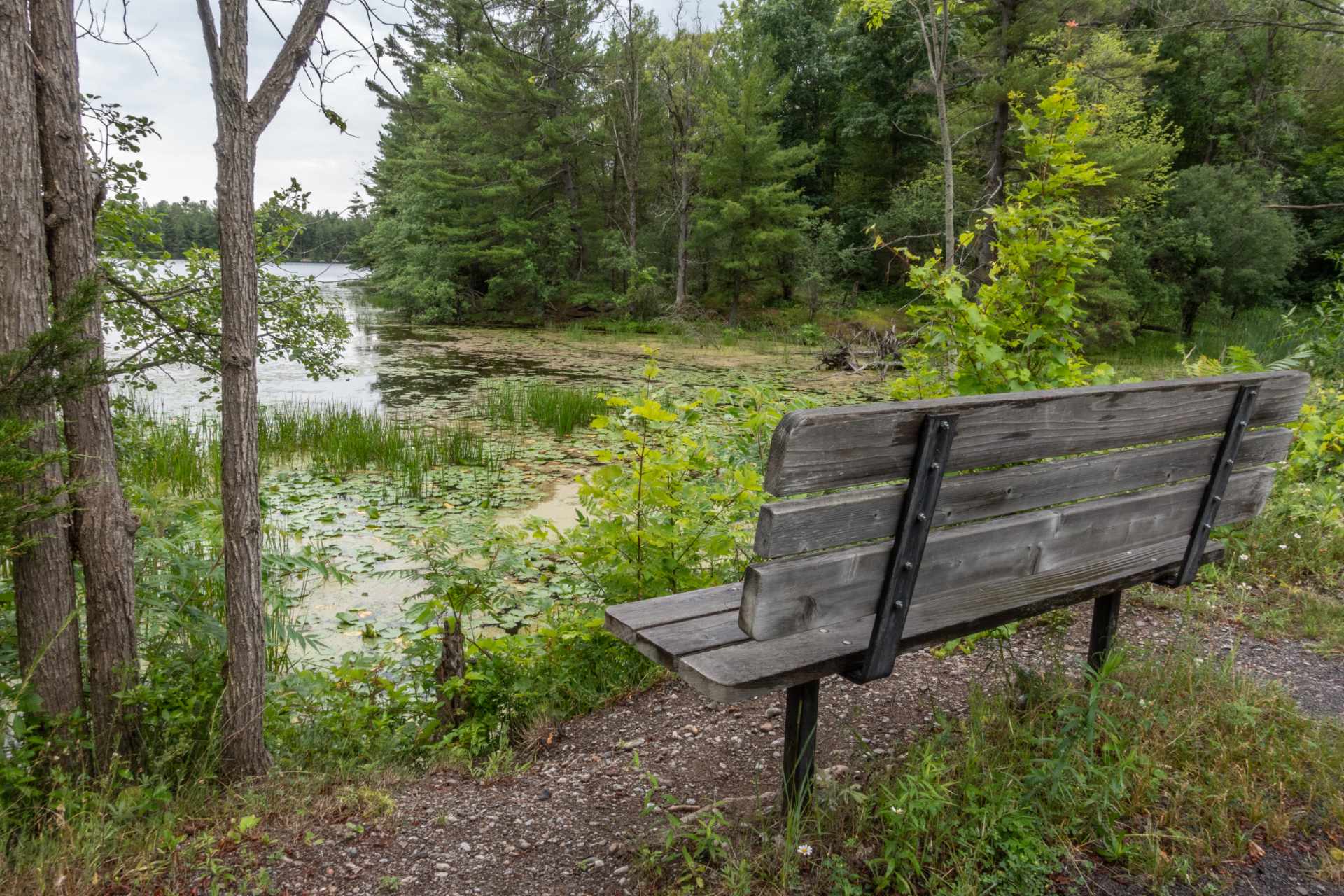 After about 32 kilometres, I ride over a long iron bridge accurately named “Iron Bridge.” I still haven’t arrived at Chaffey’s Lock along the Rideau Canal, which I understood to be 30 kilometres or so from the start of the ride. I check my GPS and find that I’ve missed the unmarked cut off. But the good news is the Cataraqui Trail intersects with Iron Bridge Lane, which swings around and takes me directly to the lock.

The Rideau Canal itself is a 202-kilometre-long waterway that links Ottawa to Kingston on Lake Ontario. The canal system, which is operated by Parks Canada, uses sections of the Rideau and the Cataraqui River, along with connecting lakes. Although it’s now used almost exclusively by pleasure boats, its origins emerged from the fear of another American invasion after the War of 1812 and was built to secure a secondary route between Montreal and the important naval base in Kingston.

Construction of the canal began in 1826 and was completed in 1832, and cost the lives of more than a thousand workers, many of whom died of malaria (I didn’t know Ontario had malaria back then!). Not surprisingly, the canal was largely based on well-travelled routes established by Indigenous people over thousands of years (including the Algonquin First Nations).

With no further military conflicts with the United States, the canal served as an important commercial route that opened up the region to further settlement and trade. But as history has shown repeatedly, new technology has a cruel way of snuffing out the old, and the burgeoning railway system soon offered stiff competition for shipping on the Rideau, as it was much faster.  The Rideau Canal was eventually sidelined as the preferred mode of commercial transport.

One of the more fascinating engineering aspects of the canal are the lock systems, which are used by watercraft to overcome height differentials between bodies of water or to skirt obstacles like rapids (the boat enters an enclosed chamber, where water is either added or drained from the chamber to raise or lower the boat).

In the case of Chaffey’s Lock, a 300-metre-long set of rapids that dropped several metres between Indian Lake and Opinicon Lake needed to be addressed. Engineers managed to make it work using a single lock with 3.4 metres of lift. 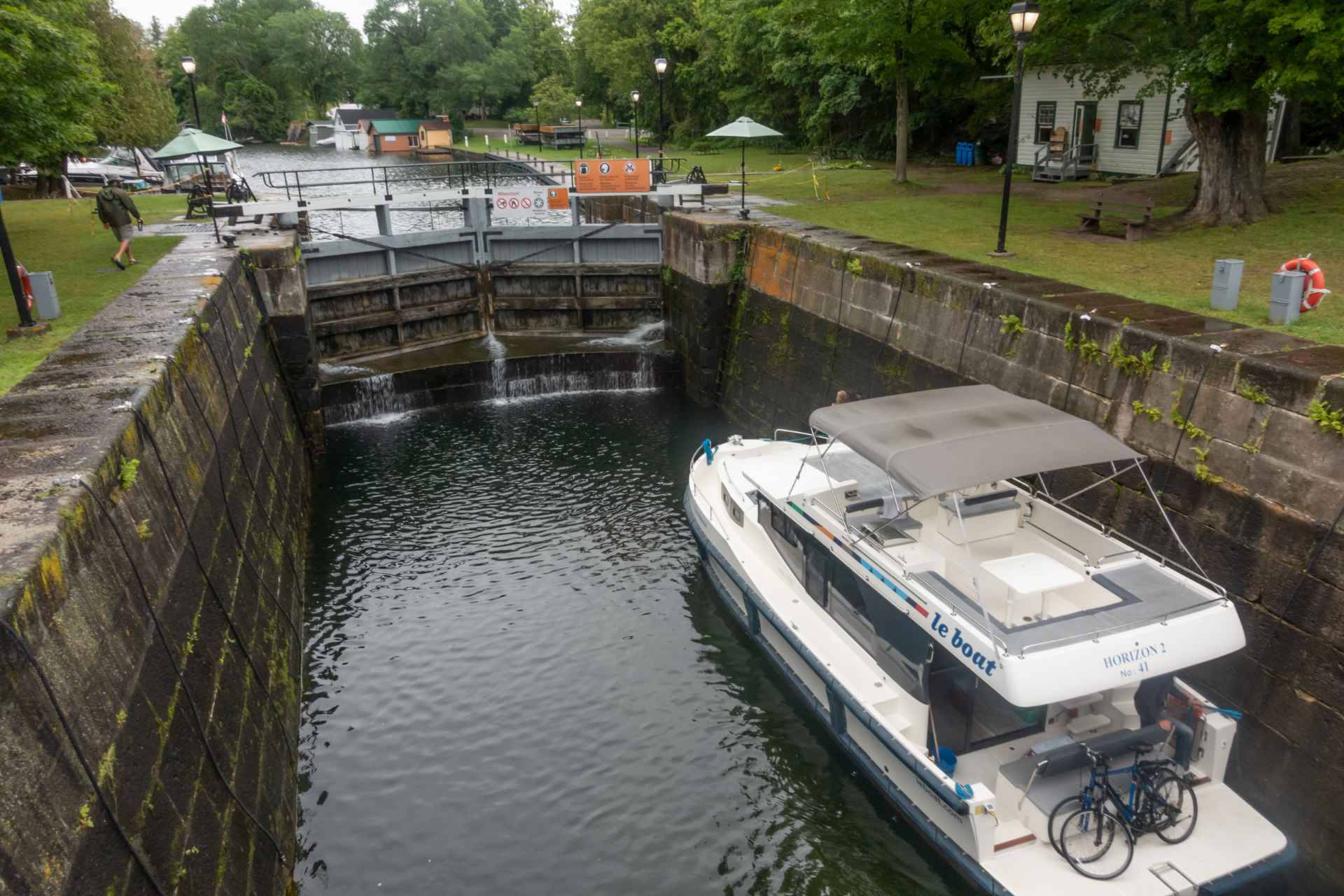 Rob watches as boats rise up in chamber of a lock like floating toys in a kid’s bathtub.

The process of opening and closing the gates is still a manual job reserved for staff, who I witness running back and forth, vigorously cranking the metal wheels to manipulate the gates. In total, there are 45 locks at 23 stations along the canal. And according to the Rideau Canal National Historic Site, the Rideau Canal is the oldest continuously operated canal system in North America!

If you’re planning to cycle the entire length of the Cataraqui Trail and want to camp or stay at motels, there doesn’t appear to be any options directly on the trail. But there are some nearby spots, if you’re prepared to venture a little off the trail, including tenting on the lawn of the lock station (first come first serve).

One final note on bike-packing. The light and fast approach, which became my trail-running mantra, also has a place in the world of cycling, where some specialized tents and sleeping bags can now pack down to the volume of a medium-sized water bottle (of course, the price isn’t small!). Moving toward the light and compact end of gear allows cyclists to ditch bulkier racks and panniers and go with frame bags, which tuck in between the handlebars, strap inside the triangle of the frame, and/or mount to the seat post — allowing for stability and less sway while riding. 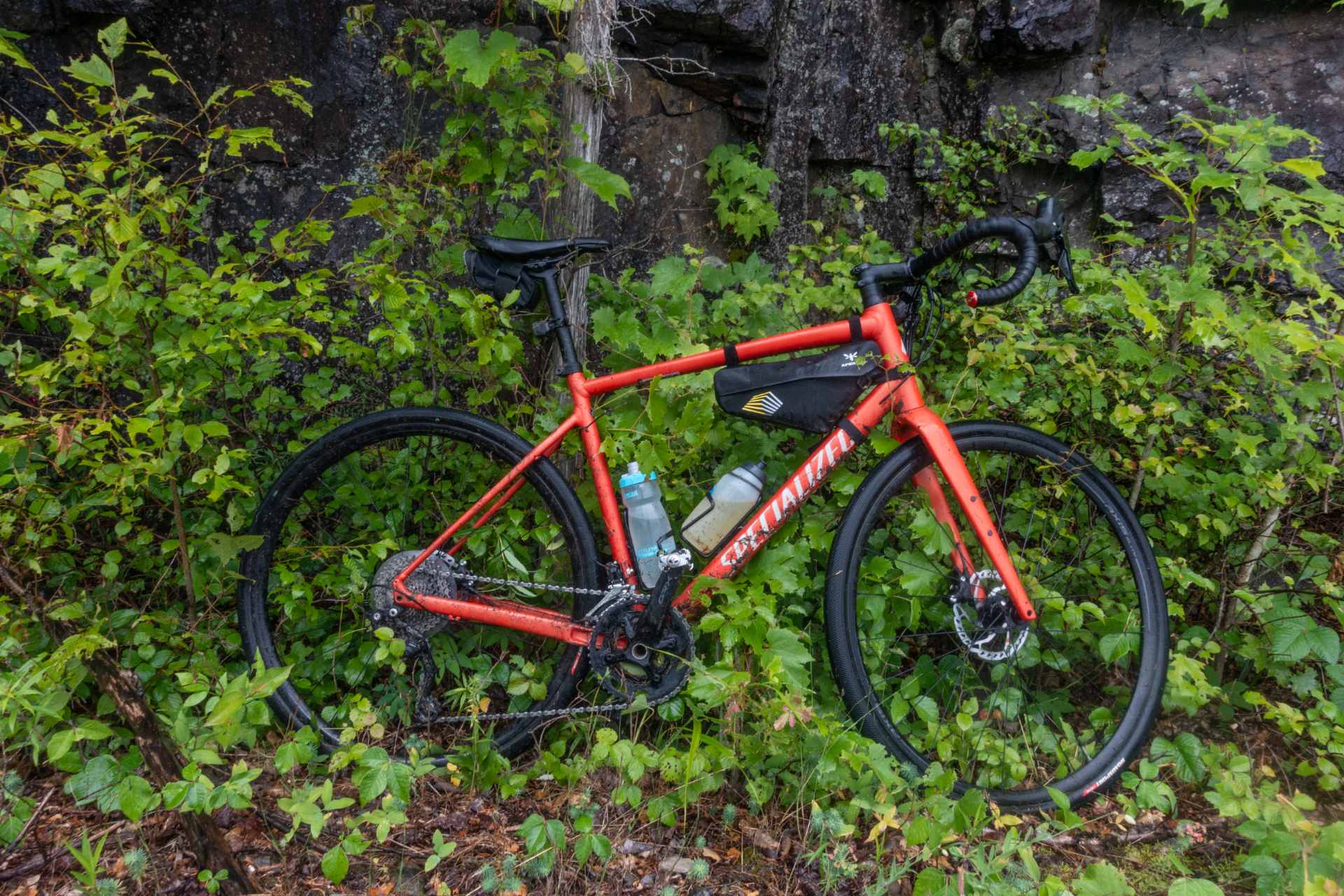 When it comes to backpacking: the light and fast approach is best, when possible, says Rob.

It has been two and a half hours of soaking rain. As I watch two boats rise up in the enclosed chamber of Chaffey’s Lock like floating toys in a kid’s bathtub, I feel the first cold chills rack my body. I switch into a more weatherproof jacket and try to warm up, but now my mobile phone is so wet that when I try to use the GPS map to find my way back onto the Cataraqui Trail, the screen is fully glitching out. 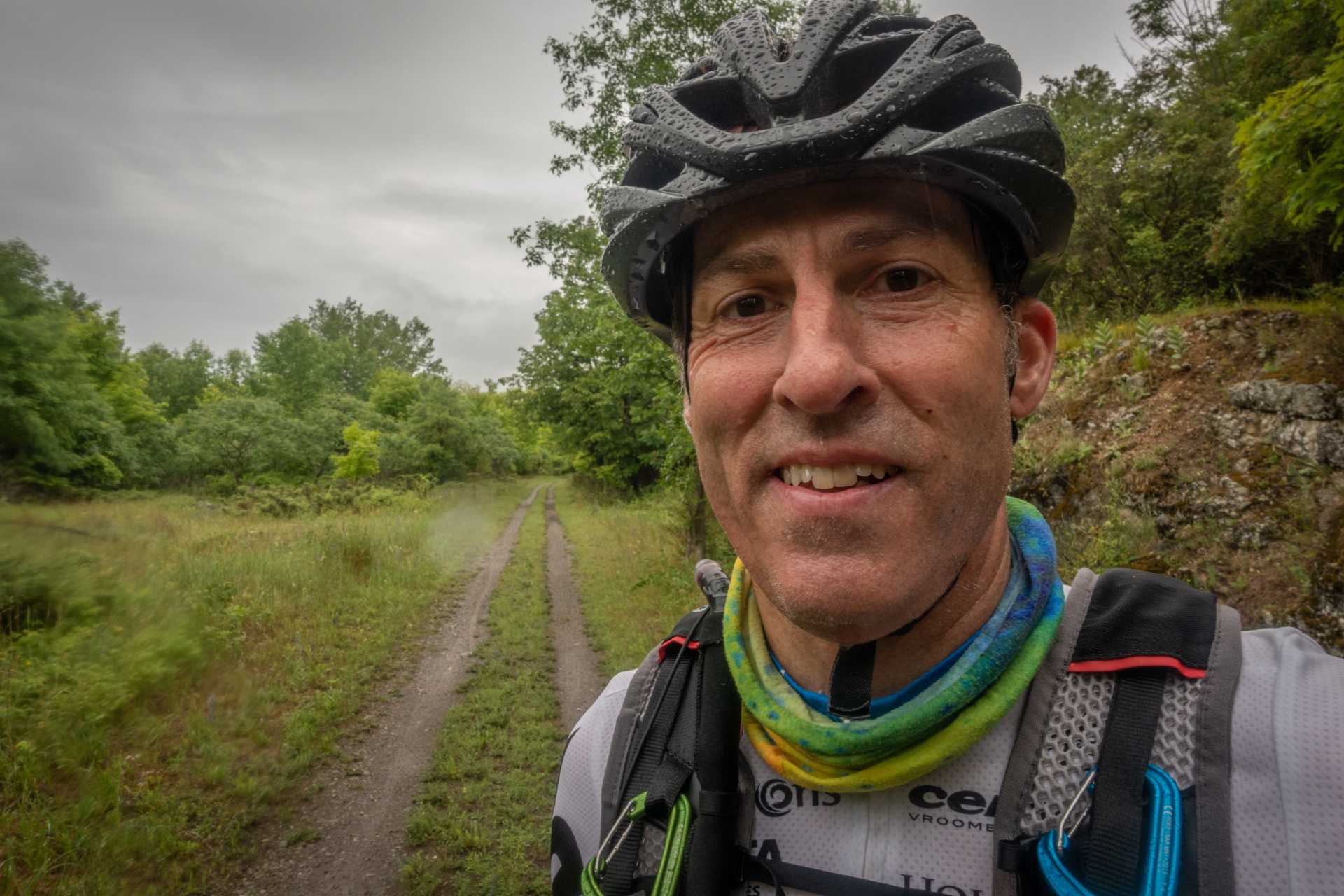 In his happy place: stopping along the trail for a selfie. 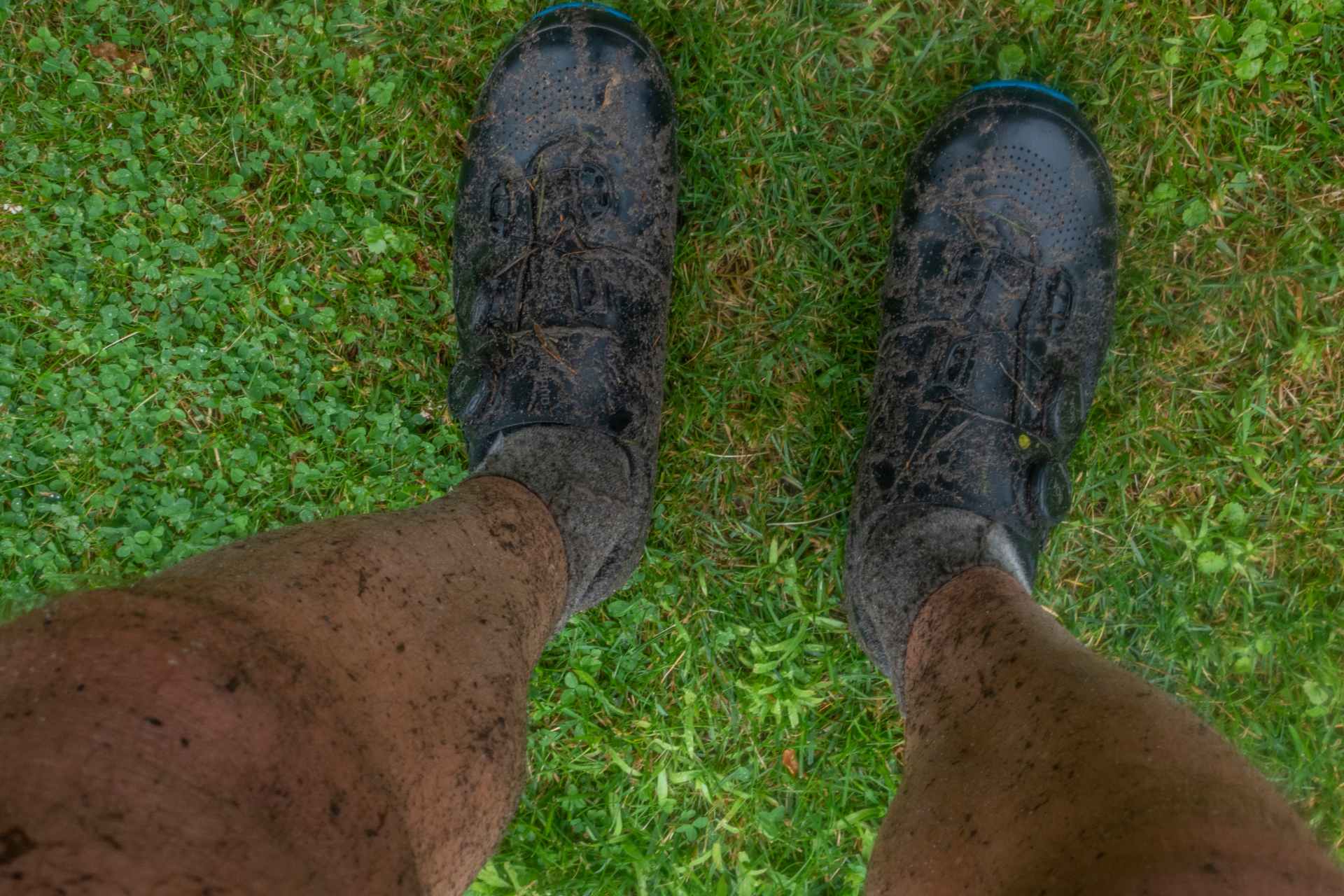 Rob’s Cataraqui Trail ride was a wet one!

Gratitude to the woman with her dog who points me up Herman Road, which gets me back on the path toward Sydenham. And so through the rain I ride, startling more lumbering Great Blue Herons into flight and having a brief encounter with a family of deer, all the while knowing that a warm mountain of poutine awaits me at Jim’s Gourmet Fries in Sydenham.

You can find more information on the Cataraqui Trail here and here at Ontario Bike Trails here. ♦

Mustang and The Kingdom of Lo: In the Himalayas of Nepal with Explorer Jeff Fuchs

Another fantastic instalment. I’m interested to read that locks in Canada are serviced… in the UK and continental Europe they’re often not, and it’s up to you as the canal-boater to operate them… which is immense fun (large ones are serviced). We once spent a holiday canal-boating in the UK on a friend’s canal boat once… it was one of the most fun things I’ve ever done – England is very densely populated but you see a very different, less busy and calmer side of the country when you’re on the canals…