“I have a confession to make: I hang around cemeteries, and have done so for quite some time.” Our senior editor tries to explain his gruesome interests.

I see dead people. Not all the time, mind you. Usually only when I travel. They don’t hide in my wardrobe or appear in my bathroom mirror, and only rarely misplace my room key—and that’s usually only after a long evening at the pub, which is purely coincidental. Instead, I tend to stalk them.

Whether you could say it was a cutting-edge predilection for zombies long before zombie culture was cool and popular, I’m not sure—but I have nearly always enjoyed the serenity, the nature and the history to be explored at many a final resting place.

There is a certain type of serenity that encompasses cemeteries.

There’s an enormous, beautiful cemetery not far from my home. It’s a great refuge from the constant noise of the city, whether in the heat of summer, the colours of autumn or the snow-blanketed depths of winter. Just metres from the road the sounds of traffic, subway trains and construction give way to birdsong, and sharp eyes can even spy foxes and deer.

The cemetery is one of my city’s oldest, and the names on the largest monuments are a who’s who of its founders, and of the stores and companies we still frequent today. But hidden among the rows of gleaming black granite and weathered rock are even better treasures.

On one of my first treks here I stumbled across the headstone of Sir Frederick Banting, the Nobel laureate and co-discoverer of insulin. It was several months before I came across his scientific partner, Dr. Charles Best. I was so thrilled that two of the greatest names in Canadian scientific history are my neighbours that maybe, just possibly, I subjected my jet-lagged, time-pressed, visiting Australian friends to a hike in the cemetery. Strangely, I haven’t heard from them since.

There are some very famous internment spots throughout the world that tend to be included in every city tour. La Recoleta in Buenos Aires houses the mausoleum of Evita Perón; while Washington D.C.’s Arlington National Cemetery draws millions to John F. Kennedy’s gravesite.

Despite debate about removing his embalmed body and interring him in the ground, Lenin still rests in Red Square, while Stalin and other Soviet leaders, writers and pioneering cosmonauts lie nearby. Mao Zedong resides in Beijing’s Tiananmen Square, while Vietnamese leader Ho Chi Minh is in Ba Dinh Square in Hanoi. Interestingly, both these two political leaders wanted to be cremated—but neither wish was granted, and their embalmed bodies remain on display almost four decades after their deaths. 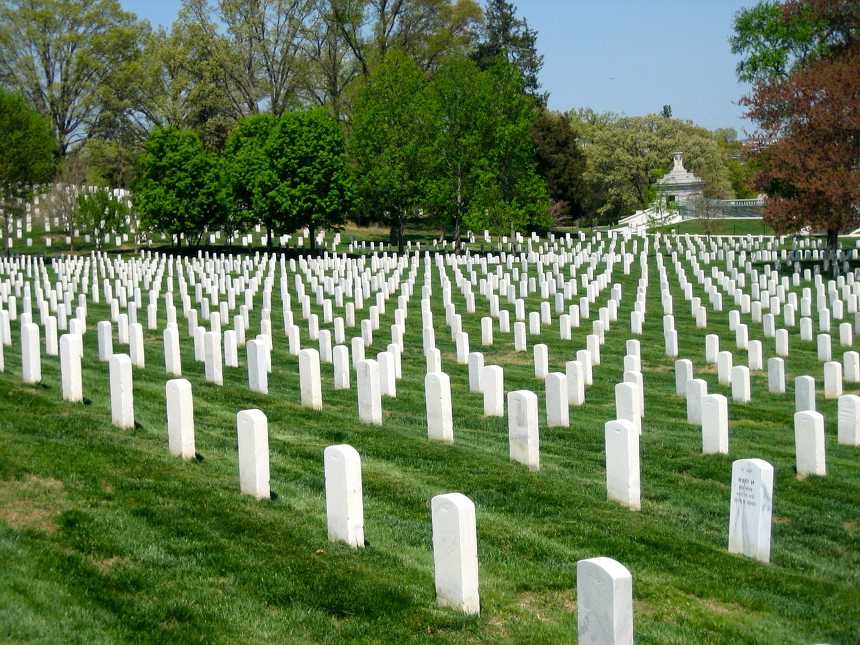 Other final resting places somewhat off the beaten path that attract the devoted and the curious include Karl Marx’s grave in London’s Highgate, The Doors’ Jim Morrison’s grave in the Cimetière du Père Lachaise in Paris, and voodoo priestess Marie Laveau’s grave, which lies in New Orleans’ Saint Louis Cemetery.

What is striking about the graves of the rich and/or famous is their diversity.

Some have ornate and grand tombs created by great masters or unaccredited geniuses; others have the most simple of markers. Some reflect their work and accomplishments; others bear little more than their name and those of loved ones. But whether their final resting place is elaborate or easily missed, I confess to a grave interest in the mortal remains of the famous and infamous.

Europe is a great place for a dead quest—it just oozes dead people.

Take Rome. As much as I love the fantastic art, the ruins, the sidewalk-cafes and fashionista scooter riders, I decided to find my own dead centre in the Eternal City. 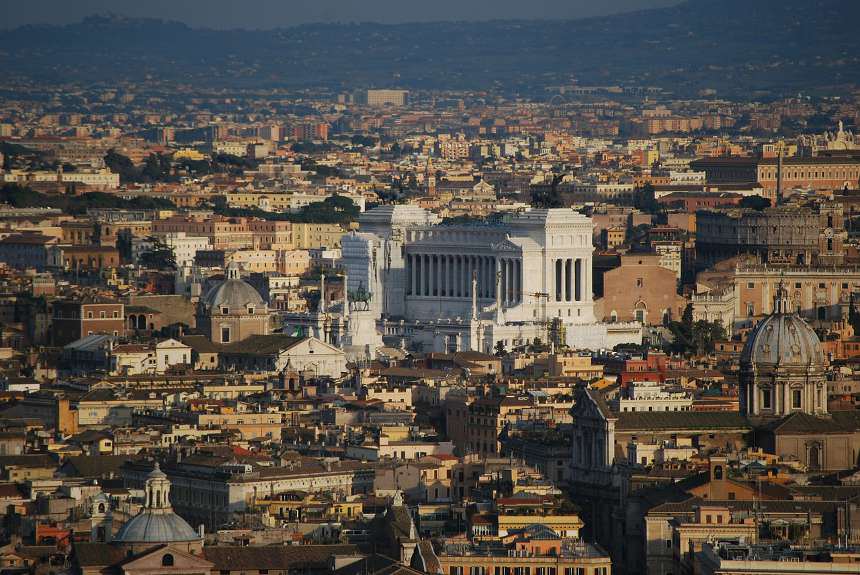 It should come as no surprise that there are 14 popes buried in St. Peter’s Basilica alone, and more throughout the city, as well as assorted saints, kings and Roman emperors (including Nero, Julius Caesar and the infamous Caligula). As you would expect, there’s also a fair smattering of great artists buried here, including Raphael, Fra Angelico and Bernini. If you’re a movie buff you know Gigli is also here—not the Jennifer Lopez/Ben Affleck flick, which was buried as soon as it was released—but opera great Beniamino Gigli. 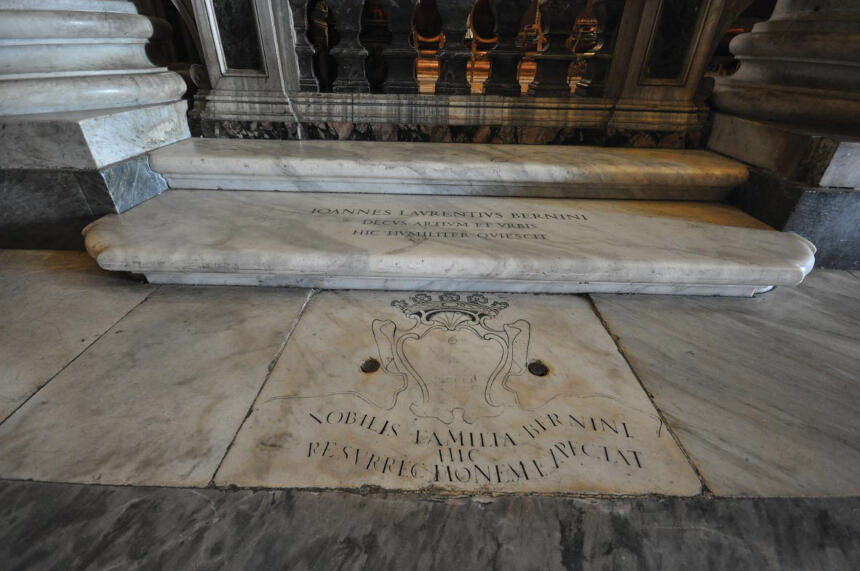 Feeling dead on my feet after a hard day’s sightseeing, I decided to seek a little tranquility and headed to Cimitero Cestio, also known as Cimitero Acattolico. Finding this small patch of sacred ground wasn’t a stiff challenge since it lies in the shadow of the Pyramid of Cestius, the 37-metre tall, 2,000-year-old marble pyramid built to honour Caius Cestius, a Roman magistrate.

The pyramid forms one perimeter of the cemetery, along with an imposing section of the ancient Aurelian wall.

No sooner had I slipped in through its enormous gate than the incessant honking of horns and mosquito-like buzzing of scooters receded, and even the oppressive heat of the Roman summer seemed to ease. I paid the entrance fee (many cemeteries charge fees to help with maintenance; some even charge for photos and video), and stopped to collect a guidebook before setting off on my explorations. 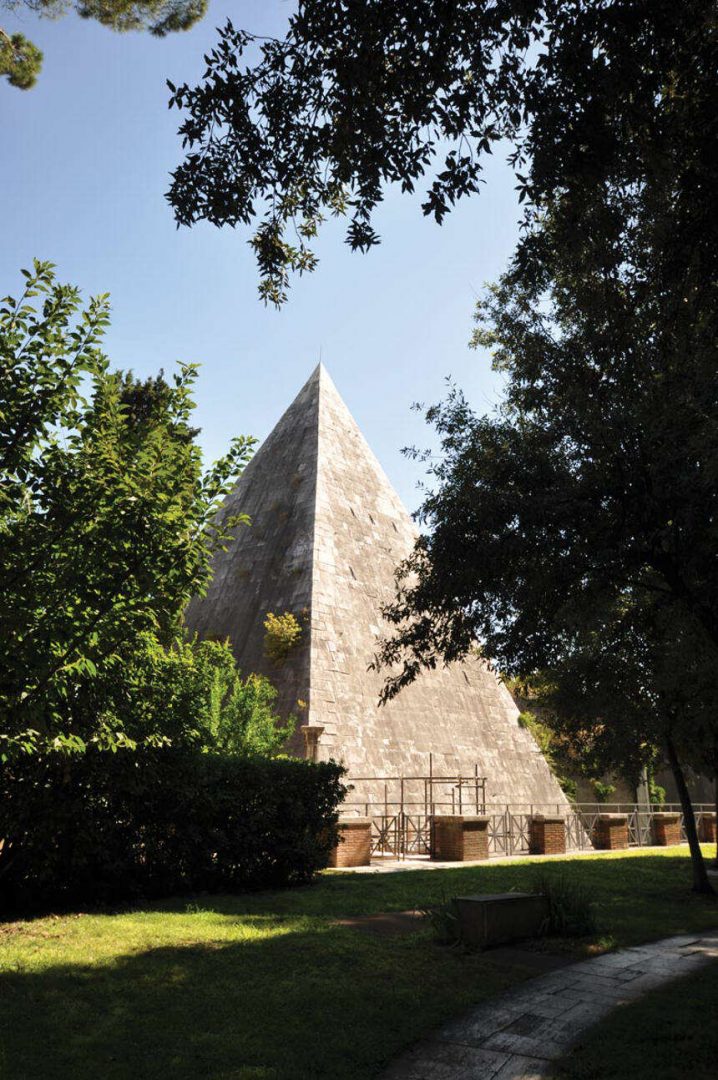 Magnificent cypresses rocketed skyward while flowering bushes and pomegranate trees seemed to fill every spot not occupied by a headstone, a winding path, crooked steps or the ancient city fortification. Graveyards scare many people—something about the body snatchers, the living dead, the flesh-eating biters—but this was an oasis of solitude: truly a wonderful final resting place.

The first internment was of an aristocratic young English student in 1738, just a few years after the area was set aside for the burial of non-Catholics in the city. Although it’s often referred to as the English Cemetery or the Protestant Cemetery, there are, in fact, followers of a dozen faiths and differing nationalities.

As I wound along the paths reading names like Bulgari (of luxury-goods fame), early communist leader Antonio Gramsci and American beat poet Gregory Corso, I confess that two names in particular had lured me to the Elysian Fields. Nestled just beneath the ancient wall is a modest horizontal headstone for the great English romantic poet Percy Bysshe Shelley. 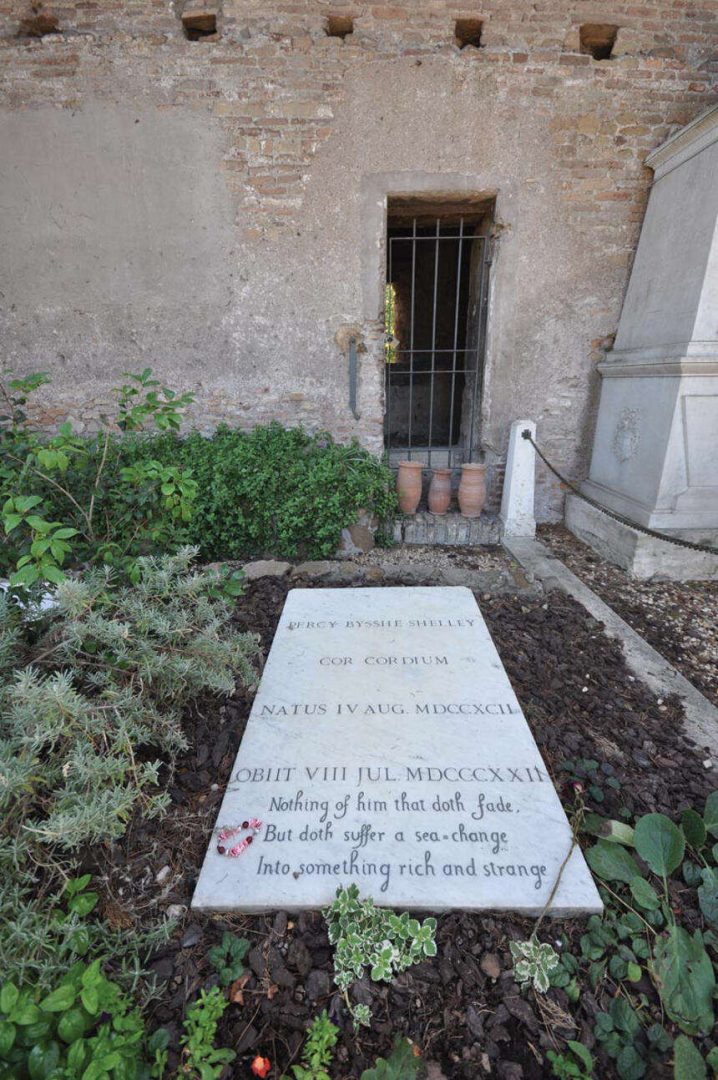 The grave of Percy Bysshe Shelley.

Shelley spent the last four years of his life in Italy, and drowned when his boat, the Ariel, encountered a storm off Tuscany. He was buried in the Cimitero Cestio in 1822, with a line from The Tempest’s Ariel’s Song engraved on his headstone: “Nothing of him that doth fade / But doth suffer a sea-change / Into something rich and strange.”

In a sun-dappled corner not far from the pyramid lies an even simpler marker.

It bears no year of birth, nor even a name. Instead it reads: “This Grave contains all that was Mortal of a Young English Poet Who on his Death Bed, in the Bitterness of his Heart at the Malicious Power of his Enemies, Desired these Words to be engraven on his Tomb Stone: Here lies One Whose Name was writ in Water.” 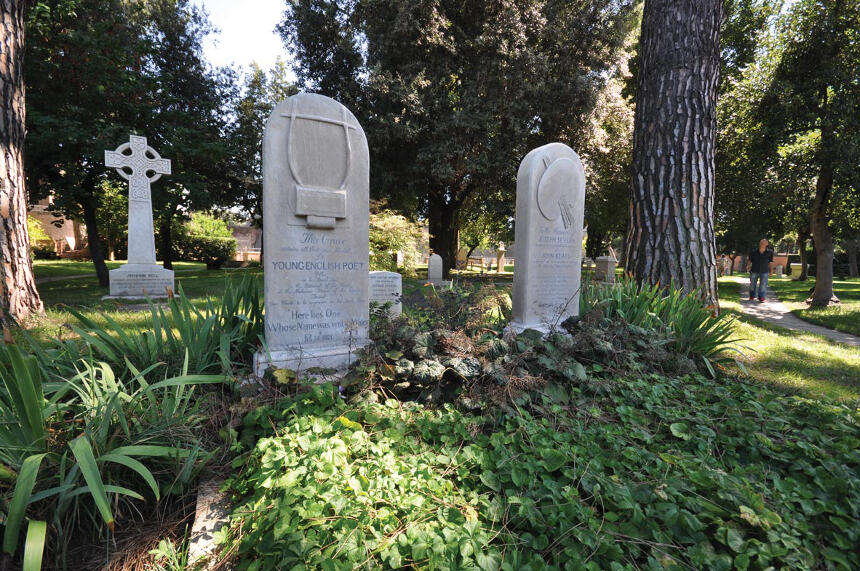 Here lies One Whose Name was writ in Water.

It is the grave of Shelley’s friend and fellow romantic poet John Keats, who died in 1821 in Rome at the age of 25. He had moved there five months earlier in an effort to cure his tuberculosis, and lived in a villa overlooking the Spanish Steps, which today is the Keats-Shelley Memorial House.

There were a few flowers and trinkets laid on the graves of Shelley and Keats by admirers, but I saw only two other people in the cemetery during my visit.

I sat on a bench beneath the pyramid, and watched one of Rome’s legendary cats luxuriate in a languorous stretch on the immaculate lawns. It was a blissful break from the city’s steady buzz, and though surrounded by Roman ruins and within nose-shot of pizzerias, there was something distinctly English-gardenish about the verdant greenery, the cooling effect of the swaying trees, the wooden benches and the scent of flowers.

Somehow, I couldn’t help but think that the great poets would approve of their final resting places.

As fellow poet Rupert Brooke once reflected on the burial places of fallen English soldiers during the Great War, “there’s some corner of a foreign field That is for ever England.”Cimitero Cestio certainly fits that description. **

Mission Migration: How Citizen Scientists are Counting the Sandpiper