Journalist Daphne Caruana Galizia was (apparently) the most dangerous person in Malta, just for calling out the country’s systemic, and seismic, corruption. Then, she was brutally murdered by a car bomb, as many predicted she would be.

Daphne Caruana Galizia was the most dangerous person in Malta.

I probably don’t need to tell you who she is anymore, because her name is making the news worldwide. I first came into contact with Daphne on January 13, 2017.

But of course I knew her work well by that point, because I had been a twice-daily reader of her blog for the past six years. Admittedly, I found her website when googling key words like “Malta sucks” or “I hate Malta,” and I would laugh at some of her more scathing articles when island life had driven me to despair, and to a point where I felt like the only sane person in a lunatic asylum. It felt good to know that someone else recognized just how strange this little island was, and how bizarre were some of the things that passed as normal. 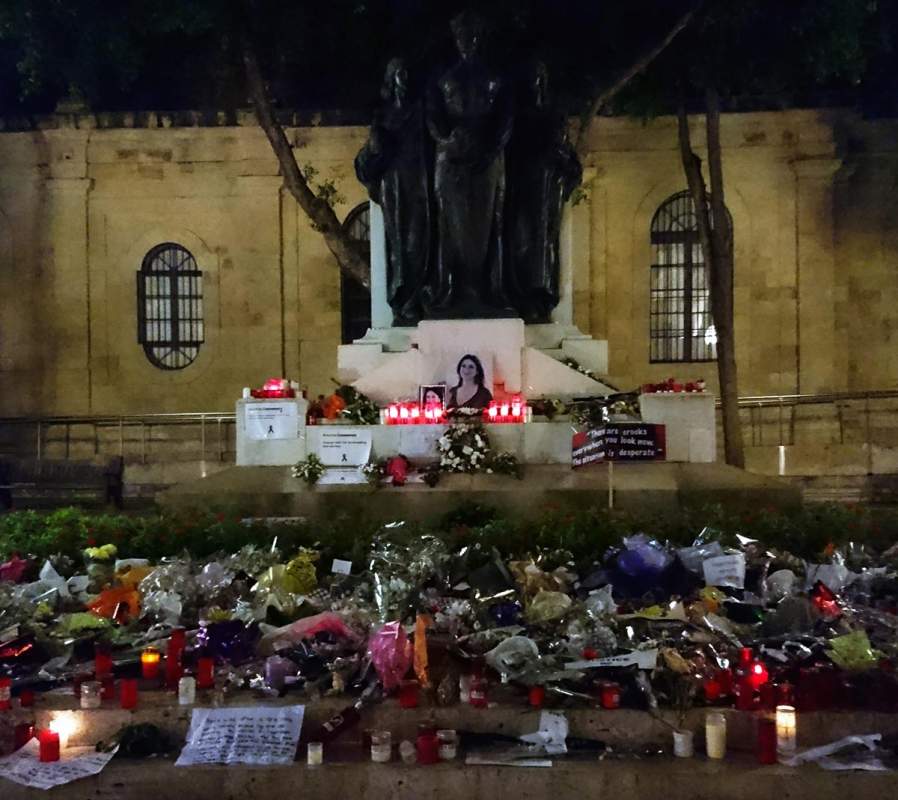 A memorial before the Great Siege Monument in Valletta, Malta. (Zugraga/Wikimedia Commons)

To cite the name of Daphne was to take sides in the ongoing village football match that is Maltese politics. I would be dismissed by half the population of that country simply for admitting that I followed her work. People asked me sometimes, “Do you read Daphne?” But they always whispered and looked over their shoulders while saying it.

This is unfortunate, because Daphne was the only proper investigative journalist on the island. While the main national newspapers were parroting whatever government press release was published that day—holding up clear, documented paper trails of evidence alongside nonsense, like “Konrad said he didn’t do it” and printing “It’s anyone’s guess what happened, you decide”— Daphne did what any self-respecting journalist should do. She dug. She followed her instincts. She published what she found, and she stood by her carefully researched words.

Her blog and her columns in The Malta Independent became a lone voice of sanity in a sea of whataboutism, shrugging, avoidance and pathological allergies to personal responsibility. And as Malta descended into astonishing depths of corruption, Daphne Caruana Galizia’s blog was at the forefront in exposing it all.

I remember January 13, 2017, so well because I logged on to her site that afternoon to see my own name at the top of the page.

Someone had sent her an online article I wrote for Outpost three years earlier about the challenges of living in a developing country. Daphne shared it with her audience, and then fiercely defended my views in the comments.

Ryan’s article was highlighted on Daphne’s blog in January 2015.

It was a strange coincidence, because I had just left the island that week after six long years of residency. I wrote her immediately to correct a couple details, she responded in minutes and we began to correspond by email.

I became a regular featured commenter on Daphne’s blog, and I wrote two guest articles for her in the lead up to the 2017 election. She even mentioned getting together for dinner next time she visited Berlin, my current base. But I never had the opportunity to meet her in person.

I admired Daphne Caruana Galizia enormously for her integrity, fearlessness, honesty, investigative instincts, and for her clean, precise prose style and her biting sense of humour. Daphne was fearless in a culture where keeping one’s head down is seen as a virtue. She had integrity on an island where it is in short supply. She was the only true journalist in Malta, with impeccable investigative instincts, in a country where “journalists” simply transcribe and parrot what they are told at a government press conference.

And so the kleptocrats who had taken over the government of this tiny European Union country despised her and feared what she wrote. Reviled by half the country but secretly loved by the other half, everyone followed her site—especially her enemies, whose deeds she was always the first to expose.

On Monday, October 16, 2017, Daphne Caruana Galizia was brutally murdered with a car bomb on a small village road near her home. Her son was the first to come across the burning wreckage, and the bloody pieces of his mother scattered across a field.

The inept and politically compromised Maltese police are handling the investigation, and I’m quite certain it will go the way of the other 15 car bombings and targeted killings that happened in Malta over the last 10 years. None of them were ever solved.

The situation in Malta will get worse by the day because there’s no one to shine a light into shady corners anymore. 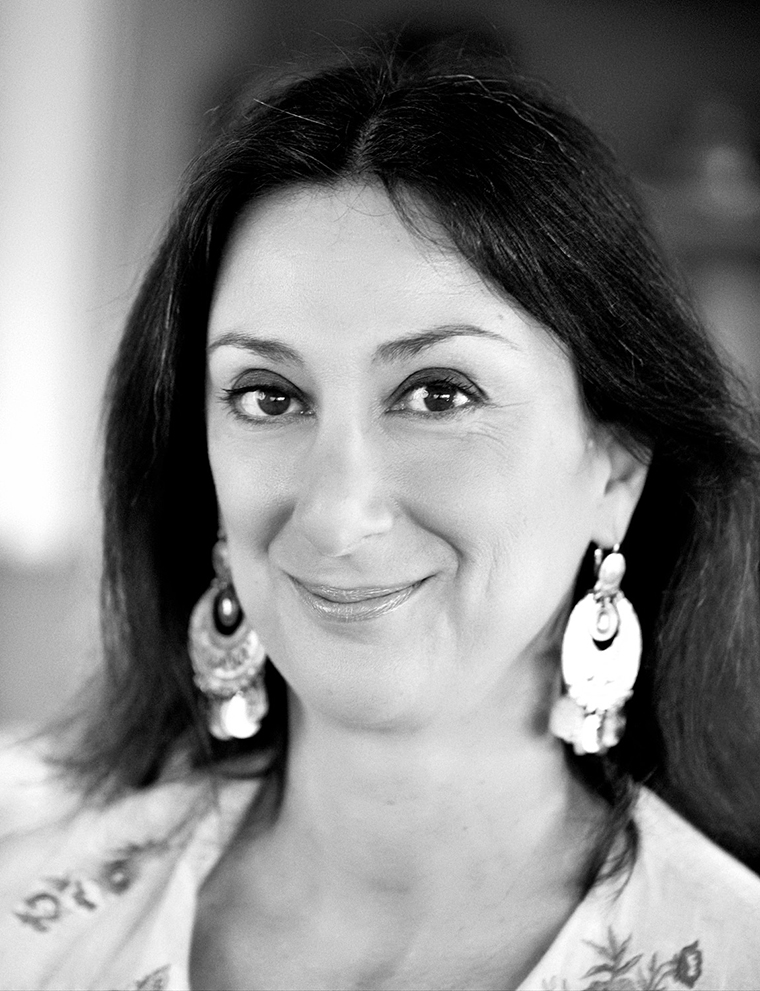 Daphne Caruana Galizia was the most dangerous person in Malta. (Wikimedia file photo)

But for once, the outside world is watching. The European Union parliament held a special session to discuss Daphne’s killing, just days after the horrific event. Her sons and husband were invited, and the parliament held a minute of silence in her memory. They also lowered flags to half mast, and are renaming their media centre after her.

But in Malta, as of this writing and printing, nothing. Parliament did nothing—even as the story of her brutal murder made international news, from Japan to Canada and every paper in between. The foreign media seems to view it as an attempt to stifle freedom of expression, and as an attack on the press. And I guess it was, in part. But the rot in Malta goes much deeper.

Journalists have descended on the tiny island in a swarm to cover this brutal killing, too, and from what I’m hearing and reading, they’re shocked at what they see. They’re shocked at the complacency of the people, of which only a handful took to the streets in protest. (Judging by the anti-corruption rallies of 2016 and 2017, those irate few will quickly lose interest and go back to their lives.) They’re shocked at the smug press conferences of the prime minister, the man with the most to gain from this murder. They’re shocked by the gloating partisan voices on Facebook—one of whom is a serving police officer—celebrating Daphne’s death, or otherwise saying, “It served her right.”

The ultimate responsibility for Daphne Caruana Galizia’s murder goes much further than the assassin who planted and triggered the bomb, or the person who ordered the killing.

It goes beyond the money launderers and criminals who stand to benefit from her silencing. And it goes beyond the many judicial inquiries set off by her stories, and which are currently in the courts, “investigating” among others Prime Minister Joseph Muscat; his chief of staff, Keith Schembri; his minister for shady deals, Konrad Mizzi; the massive money trails from the ruling family of Azerbaijan; the sale of Maltese (that is to say, European Union) citizenship; visa scams, money laundering, fuel smuggling, human trafficking, government nepotism and cronyism, the role that Malta’s institutions are playing in all of this, and all the rest. I urge you to visit her website for more.

But if you’re unsure who or what to believe, here are just a few quotes I pulled from “Malta: Overview of Corruption and Anti-Corruption,” published in February 2017 by the global (and highly regarded) anti-corruption watchdog Transparency International:

• “Notable integrity challenges include procurement irregularities, unresolved conflicts of interest among serving government ministers, and the revolving door between the island state’s close-knit political and business class. Malta is also the only country in the European Union to have an incumbent minister named in the Panama Papers revelations in 2016.”

• “Despite its small size and comprehensive anti-money laundering legislations that include a definition of beneficial ownership, Malta ranked in the top eight EU states with the highest number of offshore entities listed in the Panama Papers leak in 2016.”

• “Malta’s commitment to combatting money laundering is due to the country’s interest in shielding its role as a reputable financial services centre. Convictions are, however, few and far between, with only five successful prosecutions for money laundering in 2015 (Financial Intelligence Analysis Unit 2017).”

• “The severity of corruption in Malta is exemplified by the fact that, according to a recent report commissioned by the European Parliament, the country lost at least 11.67 percent of its gross domestic product (approximately $1.25 billion) to corruption every year between 1995 and 2014 (Grech 2016a).”

• “…The major obstacles affecting businesses in Malta are favouritism in the government bureaucracy and the country’s shadow economy, which comprises of nearly a quarter of the entire market.”

• “The 2016 edition of the CPI shows that perceptions of corruption in Malta rose last year in the wake of a series of scandals and the country has fallen to an all-time low of 47th position.

• “…Defamation is a criminal offense [in Malta] …Malta Independent columnist and blogger Daphne Caruana Galizia had her bank accounts frozen with a precautionary warrant for $50,000 for publishing a story that Economy Minister Chris Cardona and his consultant Joe Gerada visited a brothel while in Germany on government business (EFJ 2017).”

• “Malta is the only EU member without a local chapter of Transparency International.”

Manuel Delia, the Maltese blogger who has stepped into the breach since Daphne was killed, also highlighted these elements after reading my analysis.

Malta has reached its current depth of corruption because the culture and people made it that way. Daphne Caruana Galizia shone a light into the darkest corners of a country that was once known as a pirate nation, and that has since become a black mark on the map of Europe. Her longtime friend Andrew Borg Cardona pointedly told the BBC that “people don’t get killed for spreading fake news; people get killed for becoming dangerous to the people she was attacking.”

There’s no hope for change on a local level; too many people are benefiting from the state of things in Malta. The only hope will come from outside: from a weak and indecisive European Union, or in the form of sanctions from the world’s major economic players.

But none of this will happen. Daphne will have died in vain, fighting for what she believed in, writing her truth and fearlessly signing her name to it.

At least she could look herself in the mirror each day. I don’t know how the rest of Malta can.

This article originally appeared in Outpost magazine and was published on Ryan’s blog, which you can visit for more commentary on this and other issues.

I agree with the observation that publically admitting that one read Daphne’s blog is tantamount to admitting to heretical behaviour.