The Tea Sessions with Jeff Fuchs | Master Gao, Flip Flops, and the Brew

In an exclusive series for Outpost, explorer and tea aficionado JEFF FUCHS reflects on the fascinating people and indelible moments of his extraordinary travels, and the role tea has played along the way. In this next installment, we meet Mr. Gao, an ancient-tree tea harvester who reminds Jeff that tea is better enjoyed than described.

Flip flops patter gently up the stairs in front of me and I follow them obediently. Blue, worn, and about two sizes too wide for the wearer, they swish around but somehow remain fixed to the feet. Behind me, friend and fellow worshipper-of-all-leaf-matter, Marco Zamboni Zalamena, in turn follows my own flip flops.

We arrive to a level where a carved tea table sits in an elegant disarray of cups, vessels, a calculator, and an onslaught of tiny tea sample bags. The wearer of the flip flops bids us to sit in a soft tone that is more whisper than anything. That is the way with this master of the tea – soft, coaxing, and the antithesis of anything that will draw attention to himself.

Mr. Gao sits behind the large table and uses a forearm to neatly slide everything to the side, away from the main theatre space of serving. And then, he does what is done in every home and in almost every room in this village, every single day since consistent electricity was installed: he turns on the electric kettle.

Marco and I sit facing a master with a moustache. A tidy moustache that perhaps hints more accurately at his abilities than any other part of his dress or appearance. Loose, easy clothes, stained with sweat and food and the oils of life, and thick casually dishevelled hair adorn him. It is the exacting trim of the neat moustache where some hint of a precise nature is revealed.

Where we sit matters in the tea world, and what surrounds us in the quiet heaving forests matters intensely. It matters to those whose world revolves around Puerh specifically — the oft-hyped, very oft-misunderstood, and exaggerated big leaf material of tea dreams. 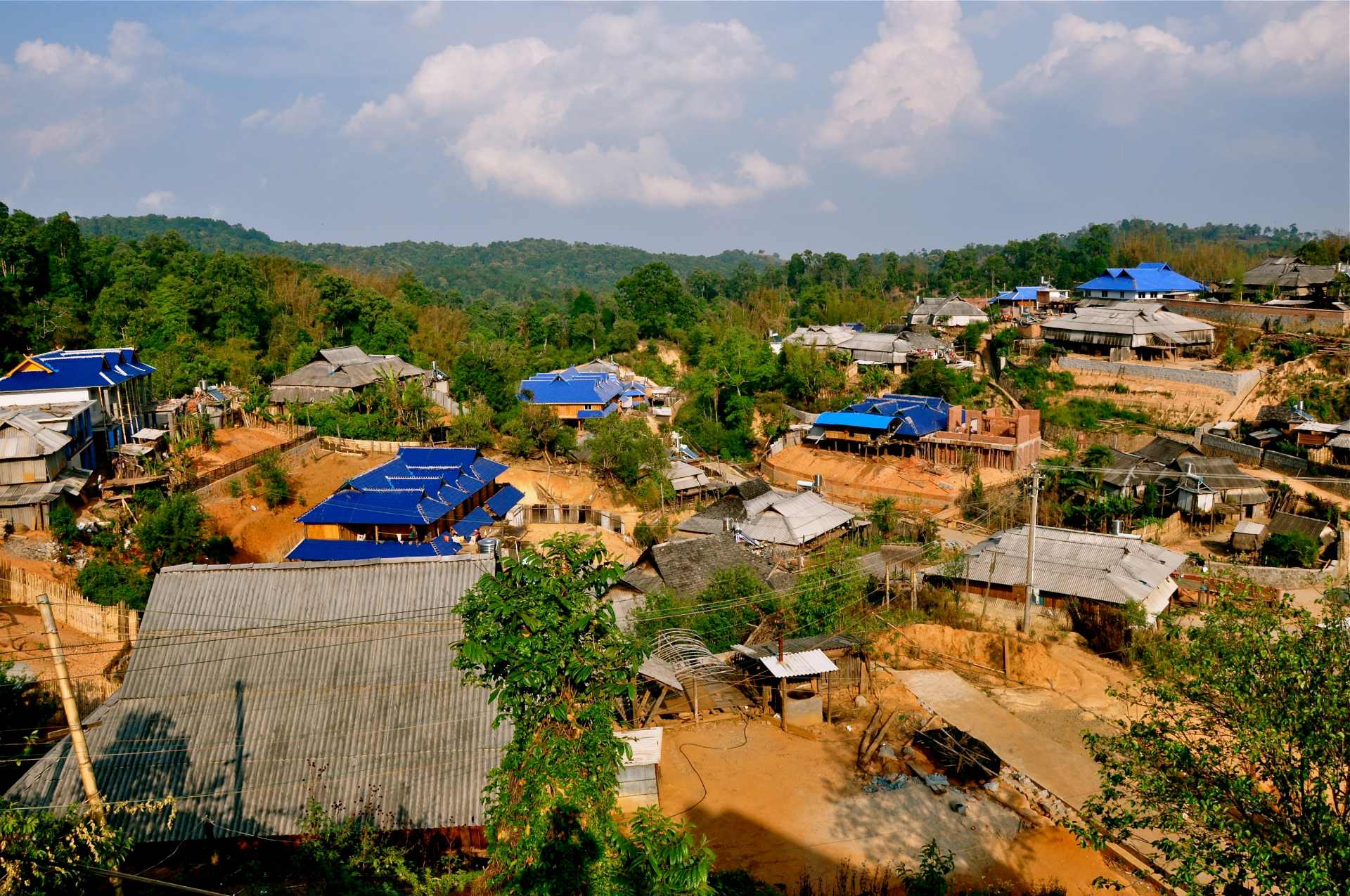 Lao Banzhang is an Aini (Akha) village where dreams and fortunes have been made. Expensive dreams. Some of the most expensive fresh harvest leaves on the planet originate off of centuries-old trees just over there, within those cicada-occupied forests. It is as close to a space of worship as exists for Marco and myself.

Marco and I sit quietly — a quiet that is out of respect and perhaps a heap of reverential awe for Mr. Gao, though the idea of being an idol for anyone would horrify him.

I know this because on one previous occasion I told him of my deep respect straight up, in a moment of pathetic worship. Marco and I arrived days ago for a spring harvest indulgence with one simple purpose: to witness and document the fabled spring harvest and production of one of the most gloriously balanced of teas. We arrived for the leaves, for the process, and for Mr. Gao. 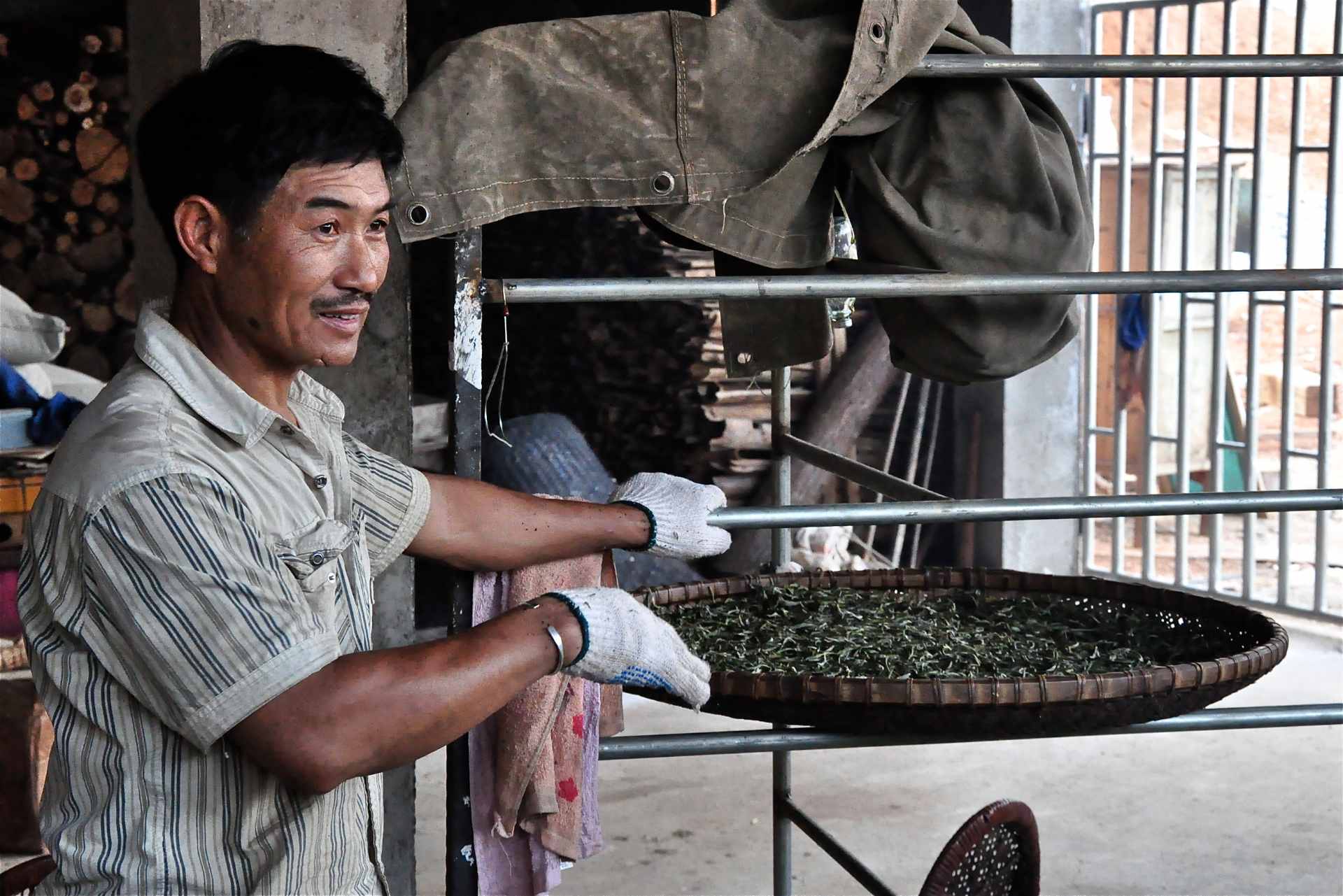 He has for long years held a special little space in my mind palace of tea. A reputation isn’t much until it’s put to the test of exacting and hypercritical tea buyers, year after year and season after season. He has remained unscathed, and only enhanced in the world of the leaf.

Mr. Gao has been present in my world for years. He has quietly mentored me, and demonstrated over the years an important and often underrated aspect of Puerh tea production: that a great Puerh needs to be gently ushered from its harvesting sources to its point of climax in the cup, rather than with any deliberate manipulation. (Puerh tea, as some of you may know, is my preferred leaf.) 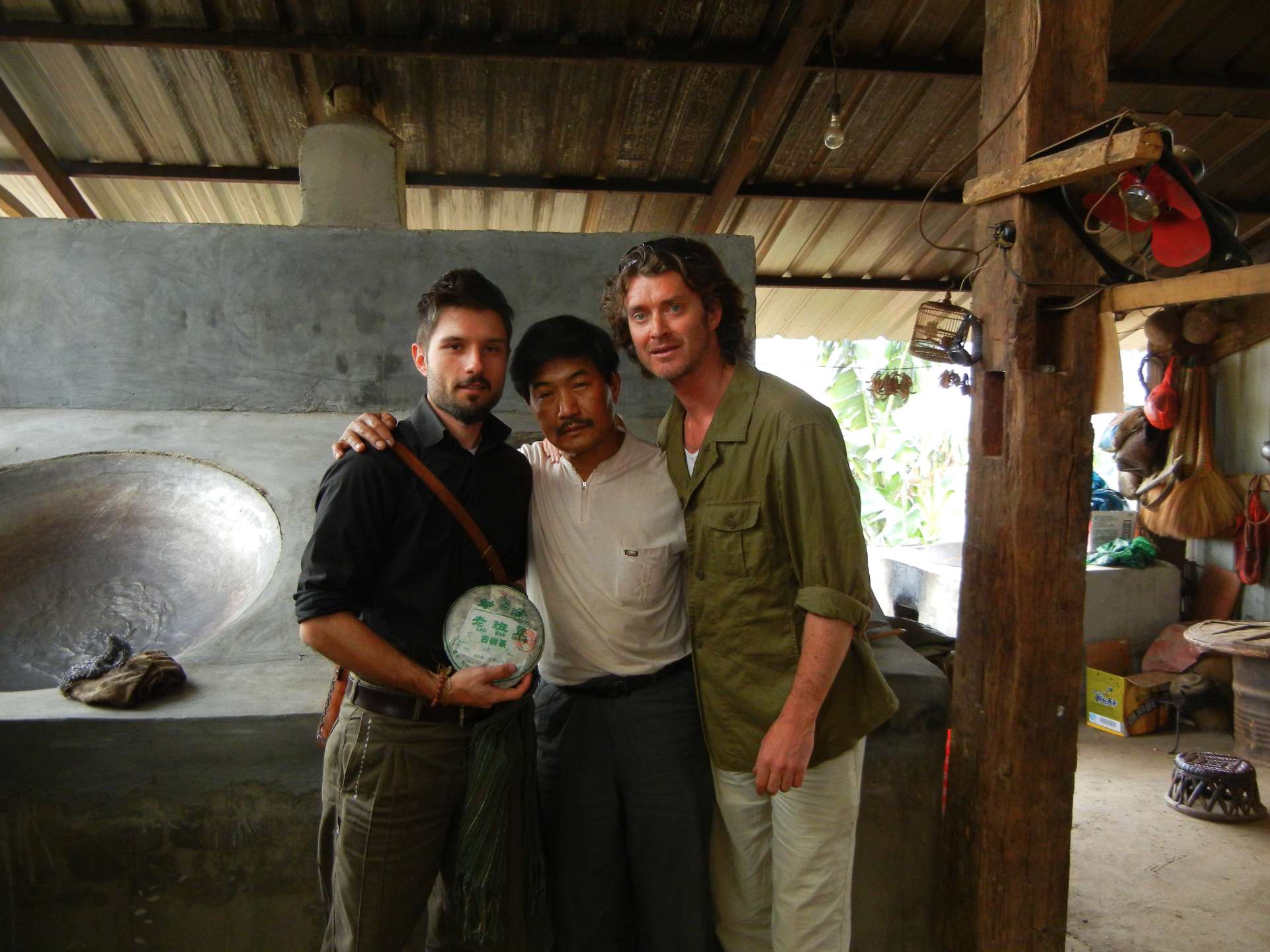 Mr. Gao is a mentor to Jeff, with a special place in his “mind tea palace.” Here, Marco, Mr. Gao.

The art here isn’t to alter with skills. Here the skill is not to alter. Here the skill is to coax and curate the leaves using the senses and experience as the delicate tools. Here the skill is restraint. Restraint of movement, of heat, and of variables. I know of few others who know how to restrain themselves for the benefit of eliciting and creating such magnificent teas as Mr. Gao regularly does.

A raw Puerh is a tea that should reveal its terroir and minerality in the cup and in the nasal cavities. Its seasonality should be present. For this, the skill set required is one of deep understanding, practice, relentless consistency. (It should be said here, too, that Mr. Gao was the creator of a tea that once convinced me of the possibility of anything — so narcotic and powerful it was.)

Mr. Gao asks Marco what tea he would prefer. Marco shudders, and tells me to inform His Highness (an affectionate term!) that it is entirely his choice. Upon hearing this, there is a little movement of the moustache — a twitch perhaps and nothing more — and Mr. Gao’s gentle eyes burn just briefly. He reaches under the table and into a box that is stacked with tea cakes, bricks, and loose-leaf tea paraphernalia that has me swooning. 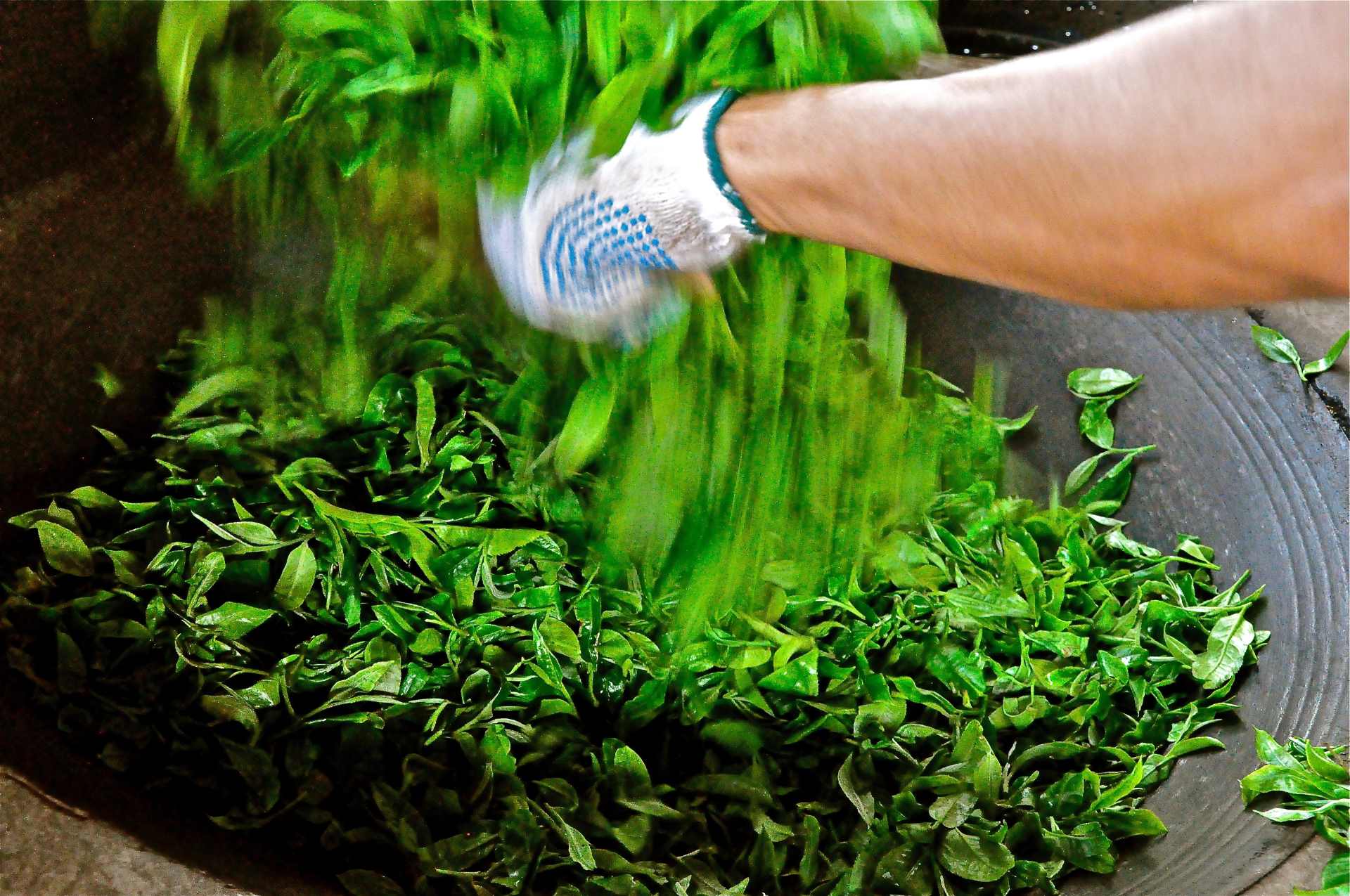 Harvesting the tea leaves. Here, they are dried out with heat, or “fried.” 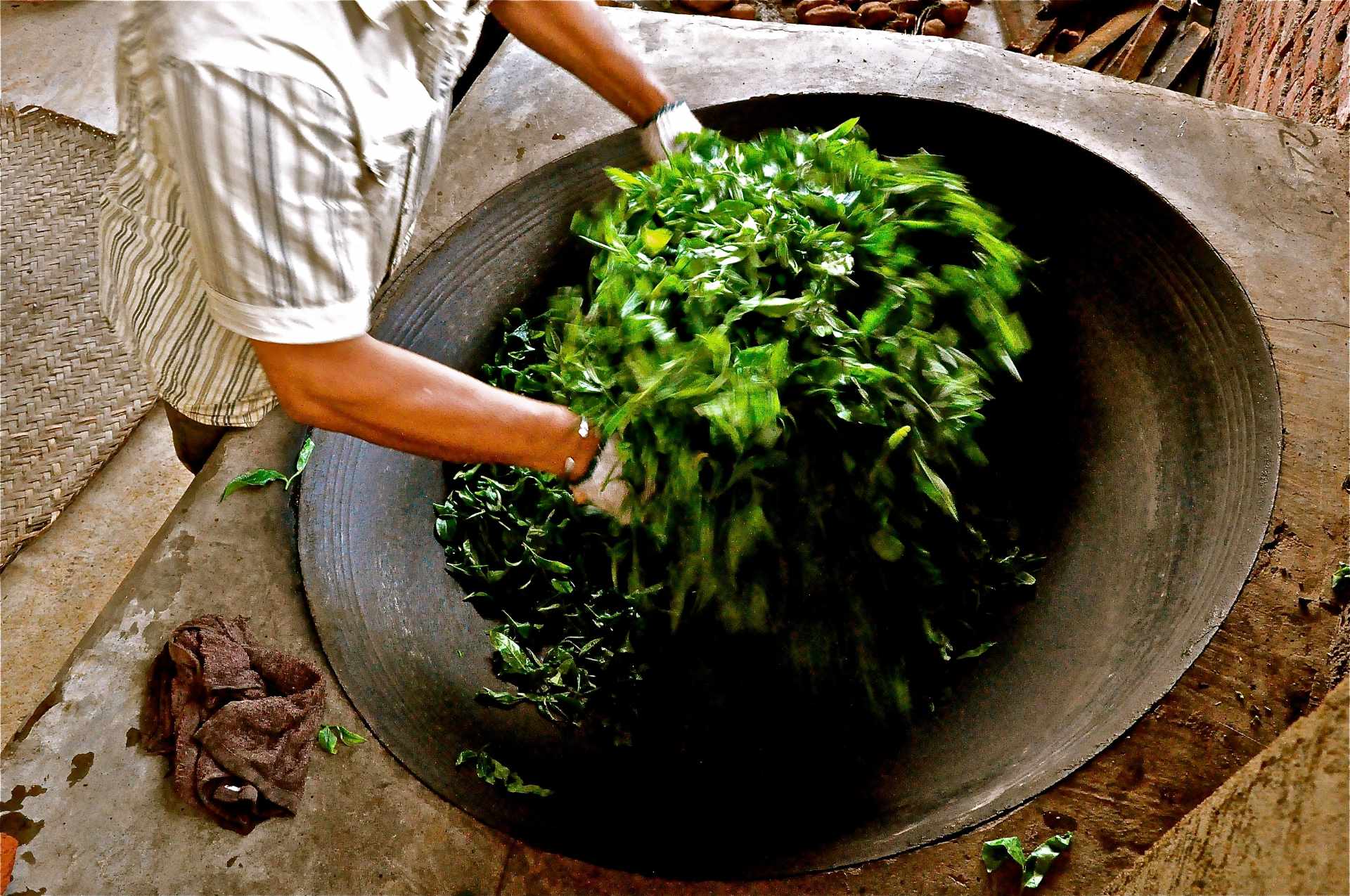 Mr. Gao and his wife and family cultivate and produce teas that are often sold the season before they are actually made, so coveted and consistent are their creations. Their specialty is ancient-tree teas from trees that are centuries old. The prices (happily paid for) of their annual spring offerings rove into what Marco notes is ‘in the Class-A drug category.’

Within the family’s pantheon of tea characters, Mr. Gao is the designated “fryer.” It is he who administers a precise, smokeless heat to the bottom of a wide pan to desiccate freshly withered leaves into something malleable, subtle, and divine. The precious “fry” is arguably the stage at which something exquisite remains so, or conversely, loses its soul.

No noisy machines, no generators, no rollers needing electricity here in this little bastion of the Puerh world. Here, the sacred element of fire is the key, and the key needs a handler and soother who is a barometer and feeler of when a tea is just…so. That soother and barometer is the man with the moustache in front of us — and, he is about to serve us tea!

In the application of heat (and continual and gentle manipulation of leaves by hand) a tea’s great body and flavour is fixed and embedded. It is a point of truth. Overheat the leaves, churn the leaves too slowly, churn them with too much force, or restrain the leaves from enough heat, and something of the potential for celestial magic is lost. 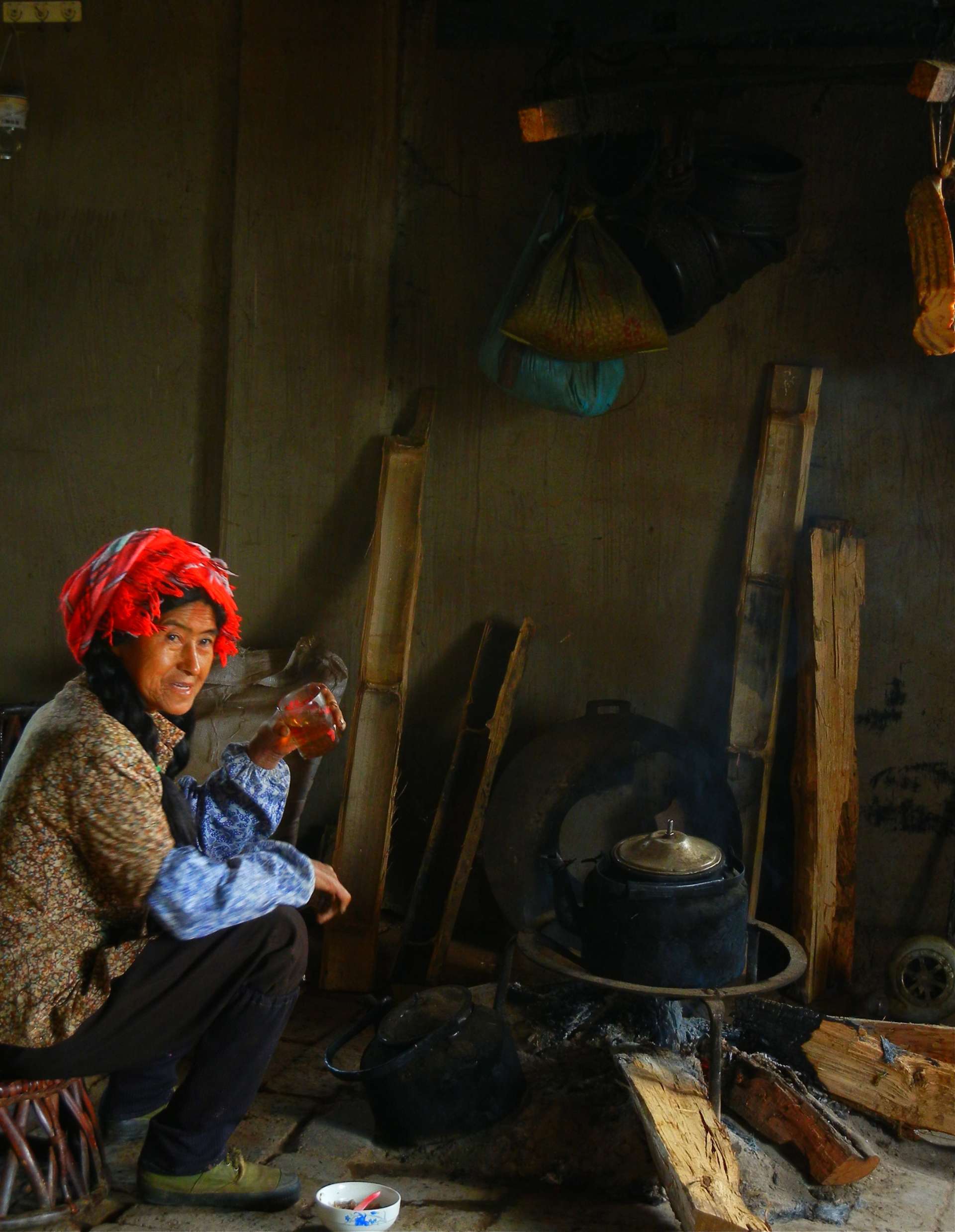 No timers or other tools needed for a great cup of Mr. Gao’s tea. (Jeff Fuchs)

And buyers, who might pay thousands of dollars for a single kilogram, will certainly know that something has been lost. Mr. Gao once responded to a question of, “When do you know the leaves are ready to be removed from the pan?” with a soft answer that deified him.

“It is the hands and the nose that know.”

No timers, no temperature gauges adorn or clutter his stoic workspace. In fact, he spoke publicly of his dislike for anything numerical because for him, tea wasn’t about something exact. His world was still inextricably bound to skills entirely within the realm of sensation, rather than anything concrete and set.

The kettle shudders atop its little coil as it announces itself as ready. Here, in a place of utter dedication to the leaves’ stimulant and economic grip, Mr. Gao quietly prepares a tea that he tells us is “good.” No syrupy language — his “good” must be something special. 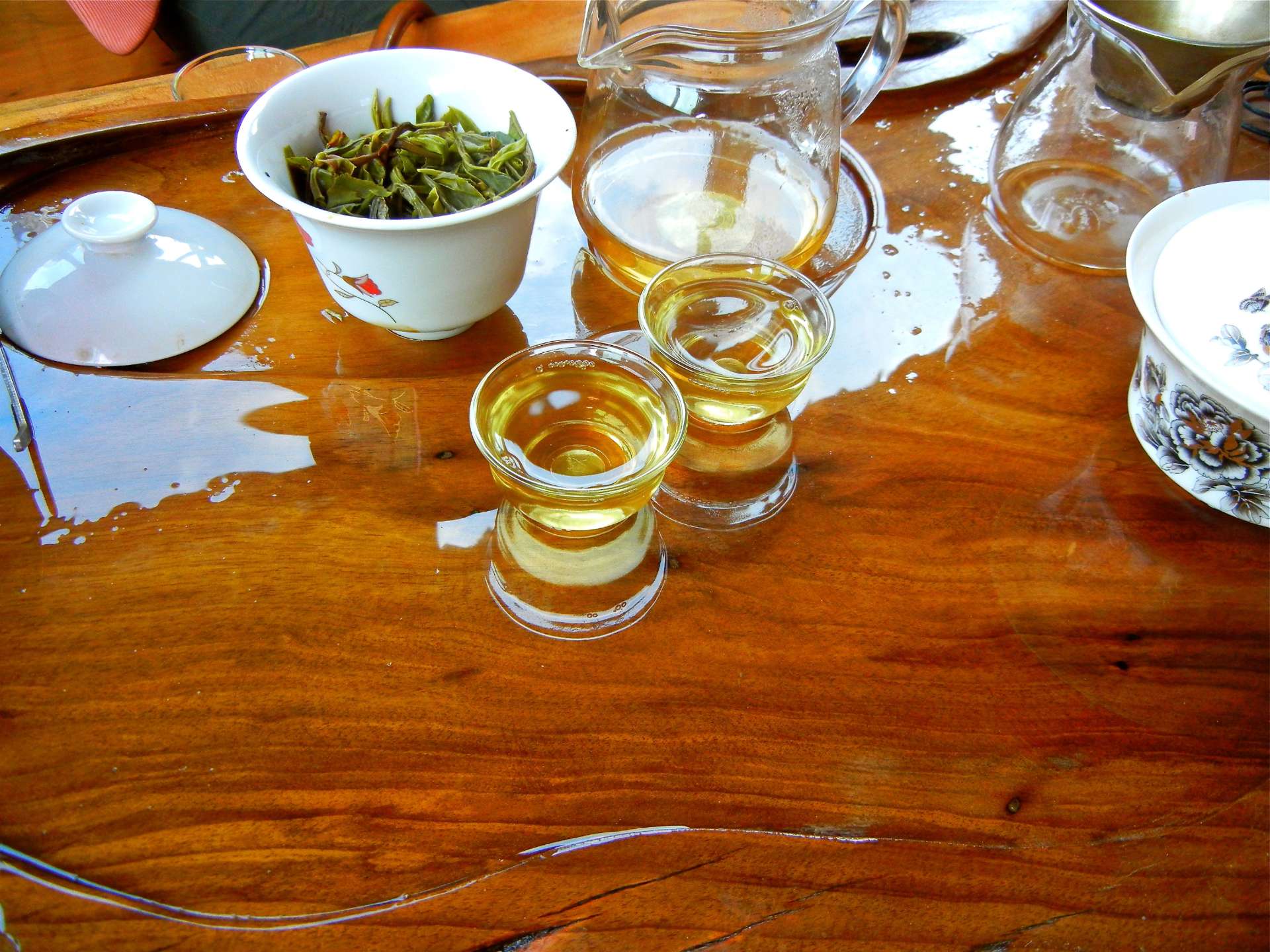 The perfect cup is sensed as much as tasted, says Mr. Gao.

He plops a small bag of loose leaves atop the table and prepares a flared glass vessel by washing it out with the noisy little kettle of steam. Nothing elegant here, as he simply grabs some leaves and unceremoniously dumps them into the glassware. There isn’t an expansive set of tools or vessels; no bewildering collection of musts or trinkets; no smelling cups or flash. There is only the water, the leaves, his hands, and that moustache.

His hands move slowly and methodically. On the inside layer of his hands there is a thin burnished layer of calluses from the heat of the tea fry, which has occupied the last few weeks of his life. Three cups are prepared with hot water. When Marco asks why this tea is good, Mr. Gao issues up an almost apologetic smile in response.

“It makes me happy. It is a tea that I feel I made well.”

He stops there and urges us both to sip, not explaining anything about the harvest date or age of trees. For him this is not the point, and he has said in the past that “Sometimes a good tea shouldn’t be described.” He doesn’t describe this one at all.

Marco and I have, for the past week, been shunting down lakes of fresh vegetal teas that rip into the bloodstream and coat the palate world in formidable floral astringency. Teas that dissipate into sweet tangs as they are digested. We’ve taken in fresh harvests of spring Lao Banzhang that we could scarcely afford, that reverberate through the body and mind when the amounts are too much. Here and now though, we take in something altogether softer and less assertive.

Successive infusions of Mr. Gao’s preference are consumed, and something more of this tea is revealed. It is a tea that, regardless of the terminology or what’s referred to as the “tasting notes,” comes back in assertive waves into and onto the palate. Gentle front notes give way to an expansive grip that releases and then returns, leaving a glorious layer before disappearing.

It is, I start to realize, the perfect analogy to our Mr. Gao. I say as much to him, and he gently smiles that smile of his.

“I don’t know,” he says. Yet through my tea-addled senses and reverence, I could swear there is a moment when his eyes gleam, just a tad. And I recall his words once again, “Sometimes a good tea shouldn’t be described.” And just let the tea be. ♦