I Survived Solo Hitchhiking in Mexico—I’m Female, and 5-Foot-3

Solo hitchhiking in Mexico—is that really a good idea?

Face it, backpackers: we all involve ourselves in activities that we surreptitiously hide from our mothers. Like leaping out of a plane while tethered to a bedsheet in New Zealand. Or popping a wheelie on a shrieking scooter in Vietnam. Or… well, pretty much anything that occurs during the Full Moon Party in Koh Pha Ngan, Thailand. Crowning the list of adventures that would provoke our fretting parents to sojourn across the globe and drag us home by our backpack straps is hitchhiking.

Despite having been the primary mode of transportation during backpacking’s pioneer days (circa the mid-to-late 20th century), even seasoned wanderers are often wary of thumbing a ride.

Perhaps this is due to our having watched too many episodes of Cold Case Files or Criminal Minds that tend to focus on slaughtered co-eds, serial killers and fetishist truckers. 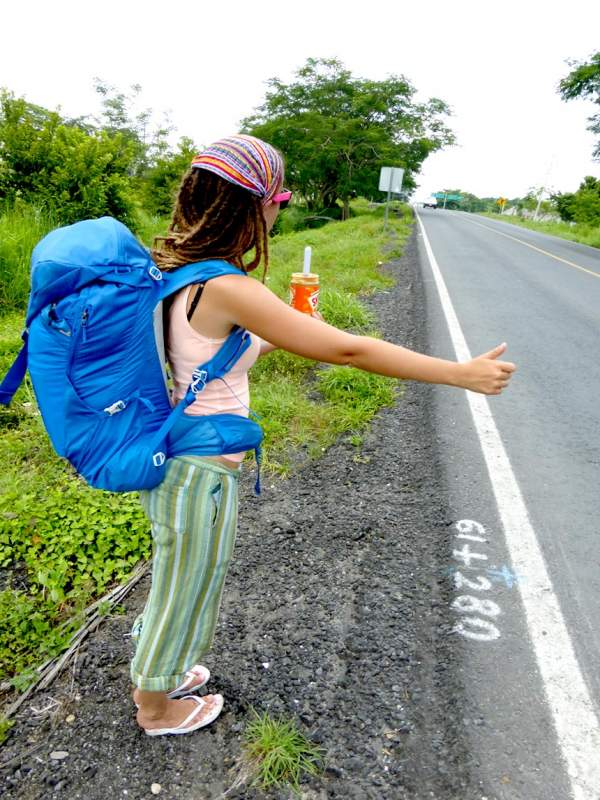 The author isn’t afraid to solo hitchhike as a way to see the world. (Photo courtesy of Sue Bedford.)

Maybe it’s because Dad always hit the gas and locked the doors whenever the family Volvo passed a drifter on the highway. In any case, it is a predominantly North American paranoia; hitch culture continues to thrive in Israel as well as parts of Europe and Latin America

To Travel is, by Nature, to Embark upon a Series of Calculated Risks.

Is your trekking guide a shrewd leader savvy on the mountain trails or an opportunistic hack eager to make a buck? Will your overcrowded speedboat safely ferry its lifejacket-less passengers to the destined port or forlornly capsize amidst the knifing waves? Backpackers frequently follow shadowy characters through writhing alleyways to what is in theory an economical guesthouse, and devour cheap eats from roadside vendors under the optimistic supposition that it isn’t last week’s chicken. In short, indie travel is notorious for muddying the distinction between excitement and danger.

Climbing into a stranger’s vehicle is akin to opening the door for an unknown caller. There is always a chance that the mysterious individual bears malicious intent—but more than likely they are a regular person with an innocuous or (in the case of hitching) benign objective.

Though there are admittedly few statistics available on hitchhiking and your chances of being killed doing it, Ginger Strand (who penned a book about the impact of highway development on crime rates) wrote in 2012 in The New York Times that hitchhiking (in the U.S.) is safer now than it has been in decades. In Canada, the Native Women’s Association and the RCMP teamed up a few years ago to raise awareness about the possible dangers of hitching, even as they admit it’s “common practice in many rural or remote communities” and that people hitch because it’s “the only way travel is financially possible.” They have some great basic safety tips and by taking precautionary measures it is wholly possible to curb the associated risk.

Hitchhiking Tips: How Not to End Up in a Truck-stop Dumpster.

I’m only joking, you won’t end up in a dumpster—everybody knows that’s the first place the cops look. (Still kidding, I swear!)

In all seriousness, hitching is similar to real estate in that the linchpin is location, location, location. If you are in an area where it is common practice, then feel free to ditch the bus and aerate that thumb. However, if you’re in a region that either a) isn’t known as a hitchhiking hotspot or b) is known for its criminal activity, then it’s wise to invest in public transportation. Beyond the obvious hazards of hitching through dubious territory, it is challenging to catch a ride when residents are wary of scraggly, road-weary travellers (you). Consider joining hitchhiker Facebook groups and inquire via posts whether any members have experience thumbing through the area you are in. Keep in mind that when hitch culture began the Internet didn’t exist: now, we have an effective tool to source information and to seek out advice on safety issues where you’re travelling to, or in. If you have a lot of traveller followers yourself, you can poll the Twitterverse as well—or (if applicable) ask your Couchsurfing host.

As a solo female traveller, I don’t usually feel comfortable hitchhiking alone. That said, there are plenty of SFTs who do. While travelling in pairs does slightly reduce your odds of being picked up (due to seat availability and the fact that a duo is more intimidating than a lone backpacker), there is safety in numbers, and it is especially worthwhile if you are not fluent in the local language. If you are with a buddy, develop a secret code for checking in with one another. For example:

“Ugh, I’m feeling kind of carsick. How about you?” – This ride seems somewhat sketchy. What do you think?

“Nah, I’m all right/Yeah, those shrimp tacos aren’t sitting too well with me, either.” – I think we’re safe/I think we’re in jeopardy.

It is also prudent to engage in conversation with your driver. Amicability is a thrice-pronged approach that will put them at ease, demonstrate your gratitude for the lift and bequeath you with an opportunity to suss them out. Don’t be suspicious of little gifts such as pop or sandwiches; it is not uncommon for drivers to treat their guests when stopped at gas stations and there is typically no perfidious motive. Likewise, consider carrying snacks to share—because nothing breaks the ice like cookies.

The Chief Rule of the Road: Trust Your Instincts.

If you’re experiencing a metaphorical “shrimp taco” moment, then request to be let out and thank your driver for the ride (this is similarly a good idea if you’re having a literal “shrimp taco” moment as no amount of cookies will compensate for a messed seat). Remember, you do not need to justify to anybody why you want to get out of the car—an uneasy feeling is reason enough.

Yes, you might be propositioned for sex by your driver. No, it won’t be the worst thing that’s ever happened to you (just the proposition, I mean). Be assertive with your response—it is worth knowing the rough translation of “be respectful”—but don’t needlessly embarrass them. Be mindful that requests for gay sex may stem from the fact that homosexuality is frowned upon or outwardly forbidden in your host country and that your driver is hoping you are more open-minded than their neighbours. Nevertheless, if your driver pushes the subject, don’t hesitate in asking them to pull over.

As a precaution, overtly take photos of the license plate and the vehicle and send them to a friend (if you don’t have a data plan that allows you to do so, simply pretend!). Your driver is far less likely to attempt anything if they think they are on-record. In a worst-case-scenario in which your driver sexually harasses you and refuses to pull over, try to get the attention of other vehicles by waving and screaming through an open window, or jump out if the car or truck isn’t moving too quickly (remember to tuck and roll!). The author in hitchhiking action.

If you truly believe you are being held hostage, then it’s worth sacrificing your belongings in the trunk to save your corporeal self. (Of course, it’s always better to keep your bag on you or with it, instead of in the trunk.) While the odds of this occurring are extraordinary slim, the fact remains that if you do find yourself being held against your will, then the situation will probably only deteriorate—so it’s vital that you remove yourself from the vehicle by any means necessary!

A few common precautions you’ll hear are: talk to the driver before getting in (to make sure they are not under the influence), keep valuables on your person (in case your backpack is stolen), only hitch during the day (when assaults are less common), never fall asleep during the ride, and get picked up and dropped off at safe locations.

Learn from Other People’s Mistakes (notably mine).

Last summer, a friend and I hitchhiked through southern Mexico for over a month. At one point, we found ourselves in a rather fishy state accepting a ride from a rather fishy trucker. After copious alarms (including inappropriate questions such as “Does your government know you’re here?” and “How much cash do you have on you?”), he made an abrupt turn off the remote country highway onto a weedy dirt road. Then, he stared into my eyes and whispered softly, “Tienes miedo?”

Which in English Means: “Are you scared?”

I unequivocally knew that something terrible was about to befall my friend and I. Yet all I could think was how incredibly rude it would be to accuse somebody of kidnapping me—despite the fact that the trucker was attempting to do precisely that. It was the first and only time during my travels that my Canadian politeness nearly got me killed. Fortunately, my friend had no such qualms regarding social taboo (he was American) and therefore demanded the trucker release us from his clutches. With great reluctance, the trucker obliged—hence my writing this article from the coziness of my Toronto townhouse instead of the dankness of a Mexican cellar. Or truck stop dumpster.

Essentially, hitchhiking is not 100 per cent safe—but then again, neither is travelling, or life in general. If you believe the risk is worth the adventure, then stay alert to your situation, create a contingency plan, and above all adhere to your gut. Oh, and you might not want to tell your mother what you’re doing. She may very well come and drag you home by the backpack straps.