Taking your first cross-country RV trip? You have no idea what you’re getting into!

Before we met, my husband fancied a post-retirement lifestyle—alone. Living off his military pension with a rescue dog in tow, he would amble around the United States in a beat-up RV named the Millennium Falcon. He would frequent military bases, plug in at their recreation camps and shop at their commissaries. Maybe schedule the occasional visit to the VA hospital to check out his infected toenail. A simple life.

However, marriage changed his future in extraordinary ways, some not as expected. His new fantasy is getting 10 minutes alone in the bathroom with Sports Illustrated.

Now three years into retirement, he wistfully glances at passing RVs and dreamily says, “You and me, babe. That could be you and me.”

Last fall we rented a 25-foot RV to see national parks and extended family out west. For a native New Yorker, I have to admit the trip-planning was exciting, since my reference points for the American Southwest derived from watching Looney Tunes cartoons as a child. Who knew, maybe I would actually see a roadrunner? Some tumbleweed?

Our itinerary included a week on the big open road, with planned stops at Death Valley and Sequoia national parks in California, a small stint into wine country, an overnight in Yuma, Arizona, and a finale at Lake Mead, Nevada, before returning the rig to Las Vegas. Footloose and fancy-free, our only task would be collecting postcards along the way.

Oh, the joy of planning, when hopes and dreams are still possible. Reality is never quite what you intend. 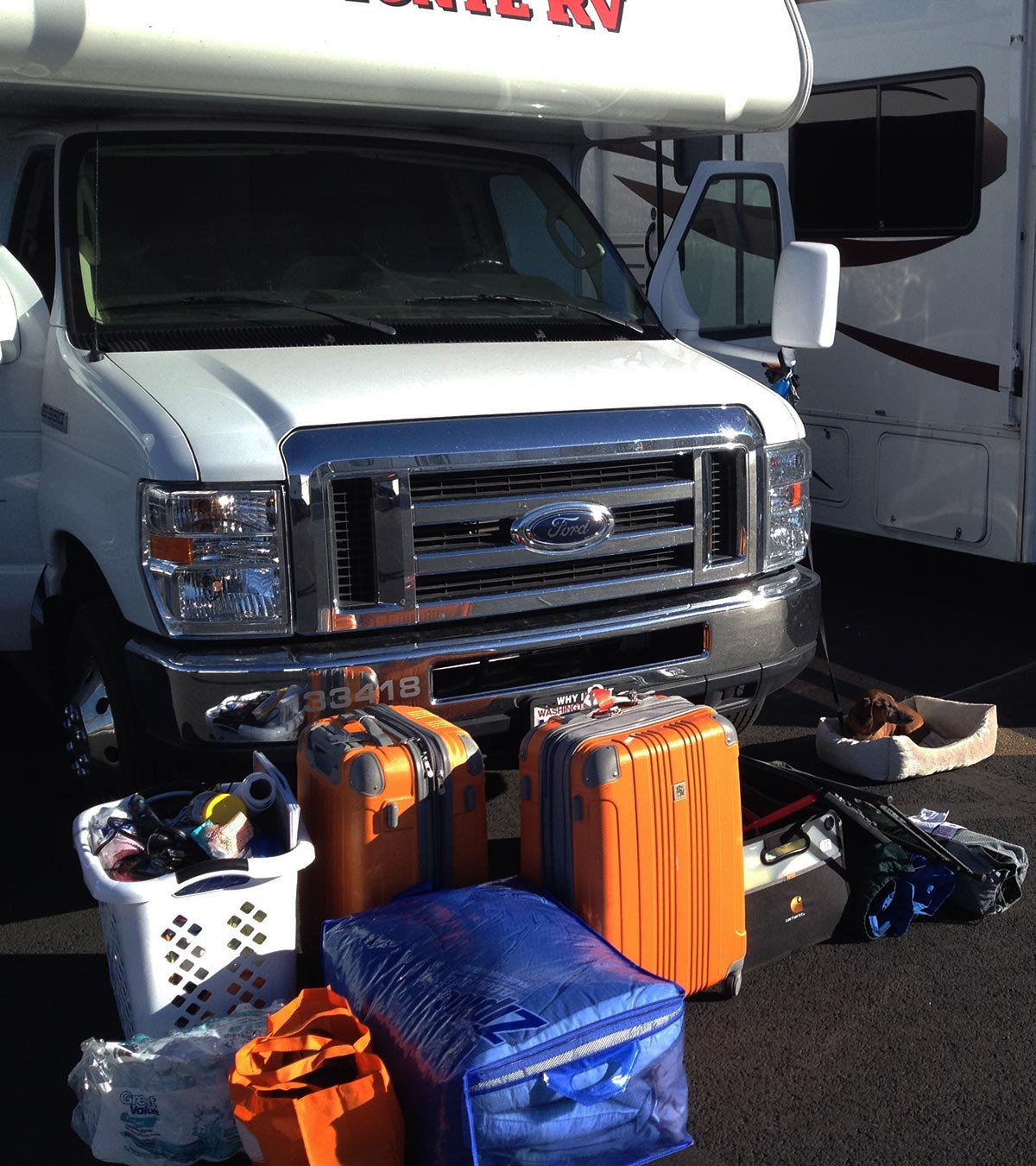 You can totally pack your life into a moving house, if you try.

When we picked up our rental, my husband was giddy with glee. Our own little house with wheels. It had a bed, bathroom and kitchen. Our provisions were securely stocked and stowed; all the necessary supplies had their own space. Even our beloved espresso machine had its own wee cabinet. We congratulated ourselves on our smart decision-making skills, rationalizing that it would be cheaper than staying in hotels.

We were naïve, but still, you can’t fault our enthusiasm. It turns out “RV” stands for recreational vehicle. I’m not sure it’s either.

The RV is an efficient little entity. Yes, you can cook, get dressed and brush your teeth at the same time—but do you really want to do all that without even moving an inch? And while useful little cubbies can store your earthly possessions, good luck finding them after they’re securely stowed.

For all its conveniences, we quickly determined this couldn’t possibly be more economical than driving your own car and staying at Holiday Inn Expresses—a realization I had after calculating the math the third time we filled up the 55-gallon gas tank that drives us nine miles per gallon.

Quickly, we  recognized it would not be a luxurious ride. The brochure confidently stated the RV sleeps six. Six what? Ears of corn? Actually, it sleeps two mid-size adults and a small dachshund. After the first day, we had a disgustingly dirty floor that was probably never washed from the earlier summer tourist onslaught. I used paper towels stuck to the bottom of my feet for slippers and shuffled for the next week. We forgot toilet paper.

Essentially, there were many helpful and practical things I wished we knew beforehand—things that were not covered in the 487-page manual.

Based on our experience, let me share my top eight tips for your first RV adventure.

1. Get a college degree in mechanical engineering.

You’ll need it to figure out the various systems which may or may not be dependent on each other—electric, gas, sewer and water. Basically, plug in to an electrical outlet wherever you land to ensure proper working order or contend with figuring out what works together. If you absolutely can’t plug in, then engage the generator for lights. Just don’t use the microwave. Use the toilet, but not the shower.

This results in myriad questions before you can perform any task: Can I flush the toilet? Only if the pump is on. Can I turn on a light? Only if there’s enough battery power. How I do I know that? If you turn on the light and it’s still dark… well, you have no more battery power.

2. Don’t make your first-night scenario one where you arrive at the RV campsite in the dark and have to back up.

This involves a lot of raised voices and useless hand gestures. Some, not so polite. It’s challenging to physically see the helpful, well-meaning spouse who loves you dearly, even if you’re acting like an ass, guiding you into the space. Also, if your fellow campers are already asleep, your inevitably raucous noises will apparently be considered “rude.”

But remember a bottle opener and corkscrew or you’ll need to get awfully creative. Resulting in a hunt for Band-Aids. Using teeth to pry open a bottle of beer is desperate—but after trying to park your rig in the dark the night before, also understandable. Nothing tastes as good as a shuffled-around cold beer, but be careful opening, or it may just emulate Old Faithful you saw the day before.

5. Travelling with an RV is convenient… up to a point.

It’s nice being able to make a sandwich and get a drink while the on-duty driver magically transports you to your next destination. But a few instances require caution: hold off using the bathroom until you come to a complete stop, for example. The toilet does not come with a seatbelt. Also, pulling off for an impromptu roadside picnic seems like a romantic concept, but the reality is you just want to get to your destination. Fast. And during the daylight. Now that’s sexy. 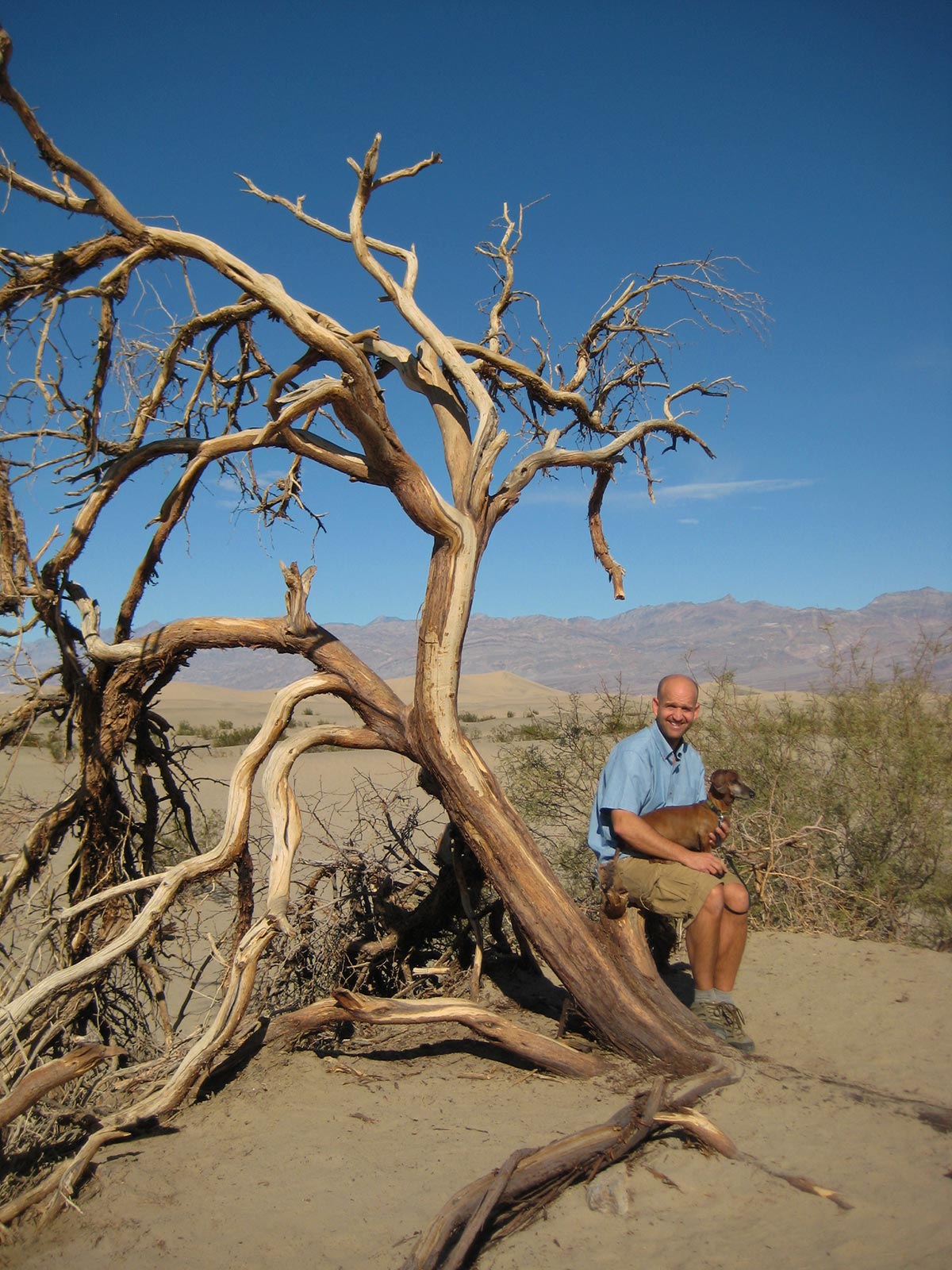 All a person needs?

The RV has plenty of seating, but the dog will remain on your lap the entire time while driving. The opportunity to look out the window, drool and feel the wind in his ears must be a slice of doggie heaven. His enthusiastic snoring proves he is the only one sleeping soundly at night, happily dreaming of our next 300 miles the following day. If your dog’s legs are too short to use the stairs, you’ll need to pick him up every time he wants to enter or exit the RV. Just what you wanted on your vacation: to be your dog’s personal assistant.

Bring earplugs or noise-cancelling headphones to drown out the excessive rattling. The stove door clangs and window blinds bang continuously inside your big metal shoebox. Your aspirin supply will quickly deplete. Bring extra of that too. A carefree drive through Yosemite to view majestic prehistoric trees is not in the cards while you constantly mitigate the next stop, meal or fill-up. Sharp turns and steep inclines invite daily nightmares. The driver is in a constant state of anxiety thinking, “Oh God, what next?

Even though the RV comes fully equipped with an oven, stovetop and microwave, you will not cook. At most, you will boil water for pasta. Make lots of noise, set off the smoke detector and your husband will be mightily impressed you pulled off making spaghetti. Eventually, eating at Denny’s feels like five-star dining, and you will be glad of it, weeping tears of joy upon arrival to the parking lot. The waitress looks ever-so-cheerful as she hands you a plate of whatever you ordered. In blissful gratitude, you want to kiss her… but after getting hold of your senses, you over-tip instead.

At the inevitable conclusion of our memorable trip viewing wonderful parks and scenery—I did see a roadrunner—we happily returned the Beast, as we affectionately called it. While we waited for the rental representative to inspect for any damages (ha!), I asked my husband what he enjoyed most about our adventure. He said being self-contained with everything he needed: wife, dog and beer. It was really that simple for him.

An RV is indeed an amazing way to see many far-flung places while having all your crap in one spot. But remember, by the time you stop for the day, it has probably shifted, tipped or fallen over. I could not find my underwear for about 48 hours, until I realized they were safely stored in the oven.

For eight days we lived my husband’s dream, and after I calculated the total costs for the rental, gas, tolls, park passes, camping sites and takeout, that dream cost about $3,000.

Next year, I’ll dream for Hawaii. ♦

Kristin lives in Fort Collins, Colorado. Her articles and essays have appeared in The Coloradoan, The Pint, Mind+Body and Regenerate Magazine. She is completing her first novel, Elizabeth Sails, which includes lots of travel... just not in an RV.

A Week in Uzbekistan, Central Asia

Funny and tearful. Fun reading. BTW, I have the spouse with a Mech Eng deg, but he is clueless on plumbing, which of course is what broke first.

We are from Vancouver Canada and spent 6 months driving around the the entire border and coastline of the US in our 5th wheel. I found the key was extended stays in areas we wanted to explore and short drives when traveling. We would look for a location 2 or 3 hours away and book a site for that night when we were traveling to locations we wanted to spend more time in. During the 2 or 3 hour drive we would stop at any place that looked interesting. I agree that long days driving in an RV for a short duration trip is not the best use of an RV. They are good for more leisurely travel in my opinion. Cars and hotels are better for long distance road trips of short duration.

“RIVERS are a different breed,” you’ll hear that in any campground. They are friendly, resourceful and helpful. They also do not complain about trifles. If that description does not fit, well, …

We met some super nice people. It was a great experience.

Sounds like you didnt include reality in your planning. I have an rv and I cook in ot, shower in it, and everything else. Im 300 pounds and i have enough room. It is cheaper on a short run to different places to get a hotel. If you go and stay in one place, rvs are cheaper. We also take the 3 dogs. Chihuaua, bassador, and papillon. They get in and out fine.

You are lucky! We were ill-prepared and the 13-year old dachshund didn’t help.

We’ve had an RV for three years. Absolutely love it!! We’ve not had storage problems, we DO cook, we DO take TWO dogs, and we’ve had some amazing trips! The convenience of NOT having to find a restaurant or hotel daily is soooo worth it. Love my trips with my husband.

Hi Rebecca – Husbands and dogs are worth it!