How is this even possible? “On a rooftop bar in Colombia, I ran into my ex, 2,000 miles from home. After that, I had to travel to the edge of Patagonia.”

Story and Photos by Yoojin Na

It was my last night in Cartagena. I was tired of making myself up for dinners alone. I put on the nearest outfit—a simple tee and jean-shorts—and tied my wet hair in a bun. And like that, I headed to Café del Mar, a restaurant on top of an ancient bastion, overlooking the sea.

The place was louder than I had expected. I took a quieter table, making my own island from the couples crowded along the edge. My heart felt like the moon—but one that was only half full. I was determined to fill the other half with food.

Unfortunately, the menu was in Spanish. I should have asked for help, but asking, even when it came to small things, meant admitting that I didn’t know what I was doing, that I was helpless. I ordered something by pointing at it, which turned out to be a strange-looking plate of cured meats.

I looked around to see what other people were eating, but no one seemed focused on their meals. Who needs food when they have ambiance? Well, I did. I was trying to make the most of an unfortunate situation when I noticed a striking man in a red polo, two tables away. He stood up to take a photo, and our eyes met.

That’s when I recognized him: It was Angel, my ex, the very source of heartache that I had travelled 2,000 miles to get away from.

It would have been less mortifying if I had run into him the night before at the salsa club. At least there, I was dancing in my off-the-shoulder dress and surrounded by men. But, in my life, the timing rarely worked out. So I ran into him here, alone with a plate of meat. To make matters even more painful, he was with a woman who, unlike me, looked elegant in her white sundress and silver heels.

I wanted to leave, but I couldn’t flag down the waitress to get the check. So I did the only thing I could do. I went up to him and said hello, even though the thought of meeting his new girlfriend made me physically ill. Thankfully, the woman turned out to be just a coworker; they were in town for a conference. Angel and I embraced like old friends, and he invited me to join their table. I wanted to play it cool, yet I found myself exclaiming, “I’m so glad you don’t hate me!”

That was October; we had broken up in June after dating for only a couple months. Following our split, perplexed friends would ask, “What happened? I liked him.” The truth was I liked him too, a lot.

On one of our first dates, he took me out to New York City’s South Street Pier. With the warm spring winds tickling our skin and the sun setting over the East River, I pointed to each bridge, and he told me how it was built; he explained which ones would need repairs and when. He knew such things because he was a civil engineer, but it was more than that: while people looked on the outside, he looked on the inside. While people cared about how things appeared, he cared about how they were made.

Angel was good in an uncomplicated way. Unfortunately, after a decade of dating, I was not prepared for good and uncomplicated. I could no longer bring myself to be excited about someone without feeling equally wary; I waited for something to go wrong. When nothing did, I came up with problems of my own.

The night before I was supposed to leave for a work trip, I found myself full of anxiety. What if he meets someone else while I’m away? And why wouldn’t he meet someone else? I mean, look at him. I began wondering how many single, attractive women lived in New York City; and of them, how many would come across his path.

“You should see other people,” I found myself blurting out. And that cowardly dishonesty was the beginning of our end.

When I returned home from Colombia, I considered reaching out to Angel. It was obvious that the universe was conspiring to bring us back together. How else was I supposed to interpret our run-in? It’s the kind of thing that happened in movies, not in real life. But I still couldn’t find the words.

Just as soon as I was unpacked, I began packing again. I stuffed four seasons into my 35-litre knapsack and made a list of the places I’ve always wanted to visit: Machu Picchu, Iguazu Falls, the Obelisk of Buenos Aires, the Witch Market in La Paz, the Eclaireurs Lighthouse at the end of the world. Then I booked a one-way flight to Lima. This time, I was determined to keep going until I found what I needed. 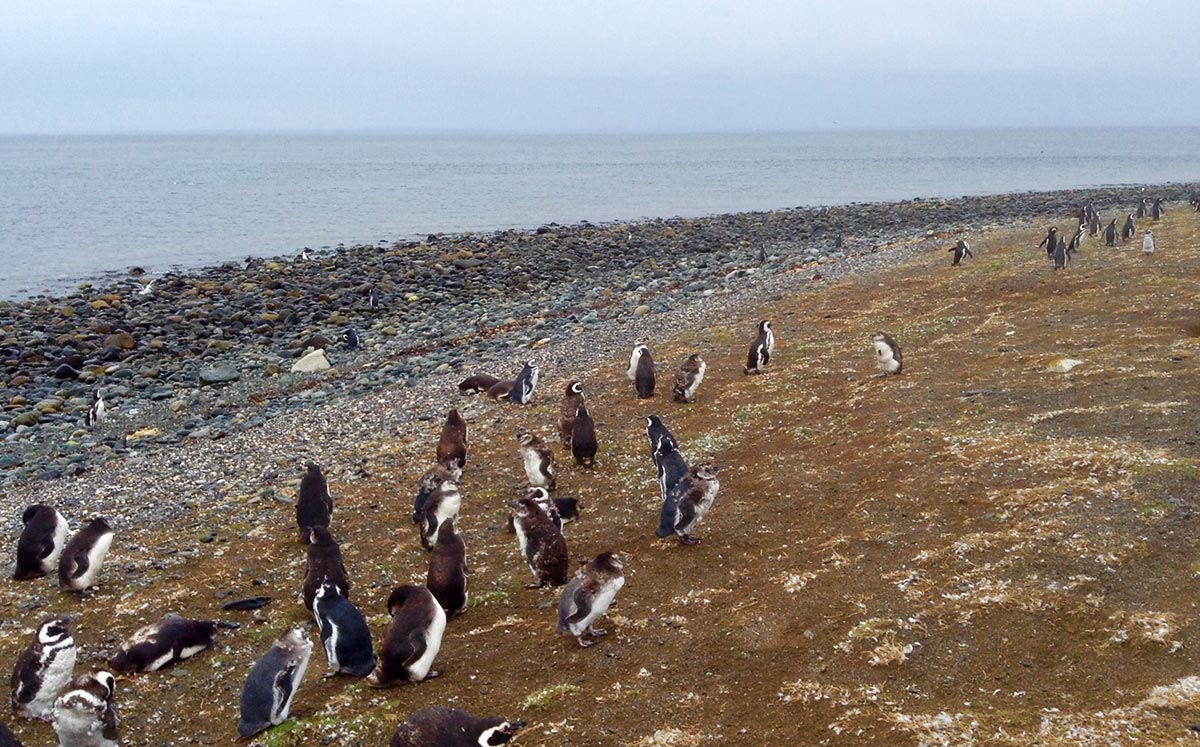 The penguins of Patagonia. (Yoojin Na)

That turned out to be my longest trip to date, and nearly everything that could go wrong did. In Lima, despite three distinct attempts, I never found the tourist office at the Government Palace. Cusco was wet and cold. The train to Machu Picchu was detained by a mudslide. Already weakened by altitude sickness, I never made it to La Paz. In Brazil, the bus to Argentina never showed.

The first night in Buenos Aires, someone stole my purse, which had my green card, phone and wallet. And everywhere I went, I never seemed to have the right adapter or the right currency; tickets were always flying away from my hands; cab drivers always harassing me at the airports.

Exhausted after a month, I set out for the last leg of my journey. I flew from Santiago to Punta Arenas. Then from there, I took a 12-hour bus to Ushuaia, the farthest south I could go in Patagonia. My first day there, I visited Tierra del Fuego National Park, where nature was as fearsome as beautiful. The cute guide at the visitor centre recommended an easy, scenic route. I chose a trail to Cerro Guanaco, which—with its bare, grey summit at 3,000 feet—resembled Mordor.

Posts by the entrance warned me that the trail was not for the feeble or anyone with bad shoes. I should have listened. I was out of shape (my diet in Argentina consisted mostly of meat and whiskey), and it took me eight hours to finish the hike. By the time I returned to the bus stop, it was deserted.

Everything was growing cold and dim around me. Desperate, I walked up to the only car left in the lot and tapped on its tinted window. I feared I was at the start of a cautionary tale. Luckily, the car belonged to a lovely family from the nearby Rio Grande. Sure, they could give me a lift, but they wanted to continue their sightseeing until nightfall.

So inadvertently, I found myself tagging along on their outing, making loops around the lake and posing for photos with their adorable children, a karate-chopper and his shy younger sister. And though I clearly looked the part of a filthy hitchhiker, they insisted I was their “guest” and took me out for pizza and ice cream. 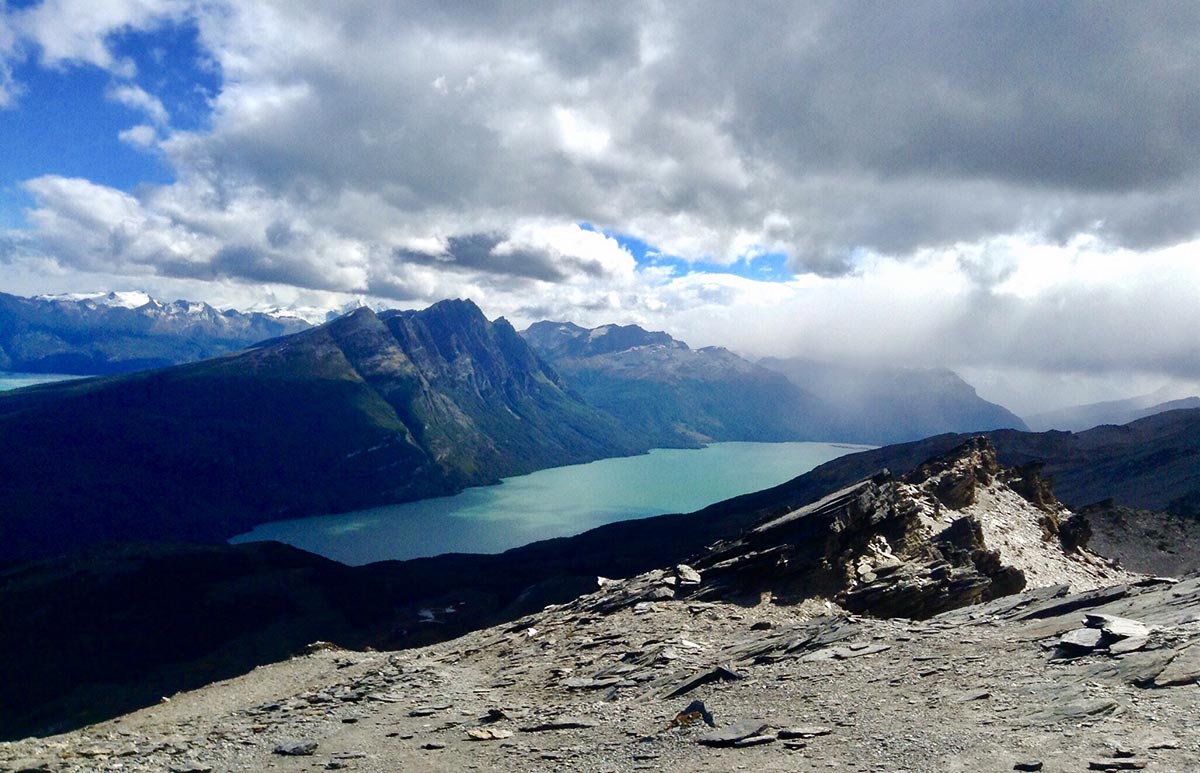 In such ways, travelling forced me into daily trust falls with strangers. Though I never found the tourist office in Lima, I somehow still managed to go on the tour of the Government Palace, thanks to a half-dozen people who were willing to help a flailing girl with unbelievably bad Spanish. And on the tour, I met Sol, a medical student and an aspiring cardiologist, who translated what I could not understand.

In Cusco, I became friends with a local named Francisco who rallied me from my altitude sickness. He showed me the incredible citadel of Saksaywaman from a cliff that overlooked the city. And while stuck in a mudslide on my way to Machu Picchu, I met sweet Carmen from Argentina, who would later take me tango dancing in Buenos Aires.

When the bus never showed in Brazil, I formed a delegation of travellers with an Italian man and Swiss woman to make it over the border. When I lost my purse, my Airbnb host, Vero, took me to the police station. We had cocktails afterward; in the week that followed, Vero introduced me to Argentinian asado, and the beautiful Lezama Park where Borges once got arrested for cuddling a married woman in public.

Many came to my aid throughout my trip; but more importantly, they shared with me the sacred things that made their lives worthwhile—hidden places, secret rituals, loving people, worlds more immense than my imagination. All because I had no choice but to be vulnerable.

When I returned home once more, it was already February, almost a year to the day Angel and I met. There was so much I wanted to say to him, so much I still wanted us to be. But this time, it wasn’t so hard finding the words.

“Want to catch up over coffee sometime?” I typed out on my phone. And once the words were laid out, I saw how ridiculously innocuous they were.

Yoojin is an ER doctor and a writer. She lives in Brooklyn.

Dream Job Alert: You Could Get Paid to Travel the World for a Year