Travelling to the Halayeb Triangle | a Desert Caught Between Two Worlds

Both Egypt and Sudan claim ownership of the Halayeb Triangle, a 20,000-sq.-km piece of desert and lush coastal area. Now, after decades of struggle, it’s finally—barely—open to tourists.

As I listened to Pentatonix’s cover of “Run to You,” watching light posts pass by at a monotonous rhythm in the middle of the night in a bus full of strangers, the driver pulled over at a tiny fuel station. “Good news, guys,” the trip organizer yelled, waking half the bus. “There is a coffee machine here.”

I glanced at my phone. It was 3:30 am, and we’d been on the road for 15 hours straight, making our way from Cairo to the southernmost point in Egypt, the Hayaleb Triangle.

If you google the triangle, all you will find are political debates about which country rightfully owns it. There is very little travel coverage of this 20,500-square-kilometre lush African region. In Egypt, where I live, you have to choose the right domestic map: you can’t just google a map of Egypt and choose any random photo. The southern border has to include the Halayeb Triangle.

Given the elusive nature of the region, it has been a dream of mine to go since the moment I learned that visiting Halayeb and Shalateen is technically possible. Before 2016, with rare exceptions, only aid convoys visited the area. In 2016, amid escalating international tensions, the Egyptian government began allowing in tourists as part of its endeavor to promote adventure tourism in the region. 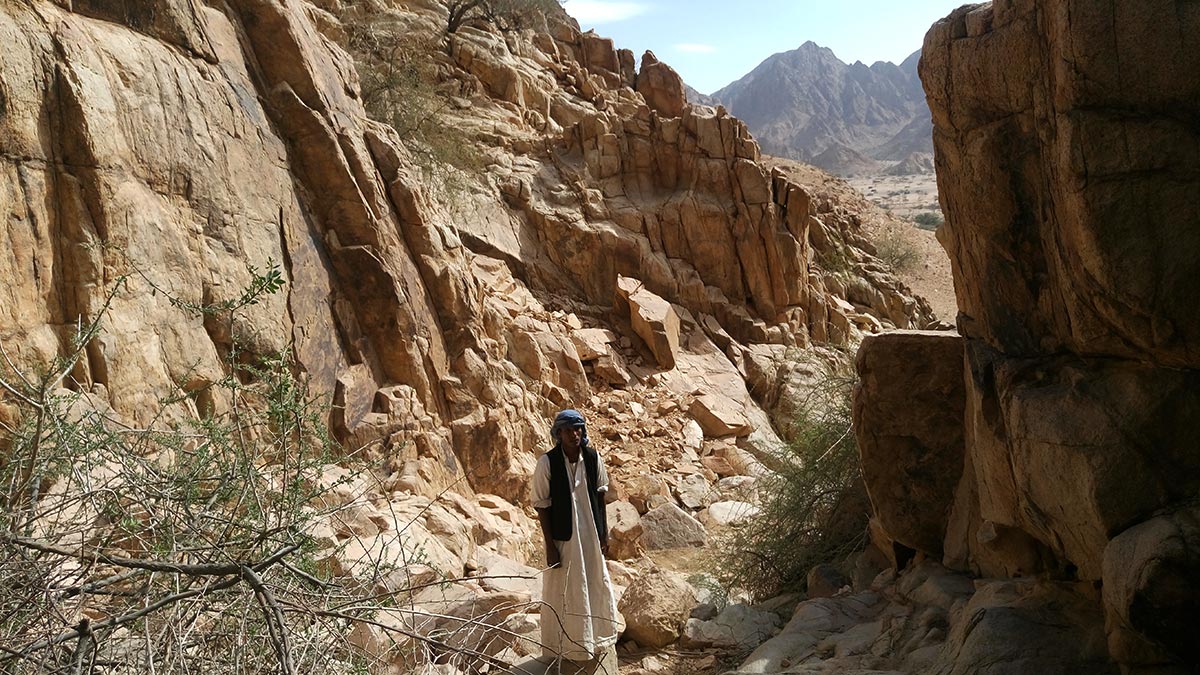 A local Bedouin stands amid the rocks of the Halayeb Triangle desert.

Locals could not comprehend that they were simply curious visitors, not doctors with supplies. The number of local tourists, however, has steadily increased since then, and I wanted to see it for myself.

Arriving at the Halayeb Triangle

To get there, we needed permits from the Egyptian army intelligence—one for every region we were to enter—with Elba Mountain being the most crucial one.

Our trip included the city of Shalteen, at the tip of the triangle; Abou Ramad, one of the main towns in the triangle; the city of Halayeb, including the Ras Hadarba border, the southernmost inhabited area in Egypt; and the jewel of the whole journey, the Elba mountain range, with its tallest sandy peak at 1,435 metres, separating Egypt from Sudan.

The region is ironically one of the safest you can visit, as the Egyptian army presence is significant. They stopped and vetted us at every army checkpoint. Smaller tour groups, however—groups of fewer than 10—did not face any of that inconvenience, which begs the question if the main issue was that we stood out as a large group in an area of natives.

Our bus entered the main market of Shalateen as the sun began rising. Luckily locals there start their days early. By 6 a.m. some of the shops were already open, allowing us to briefly talk with the early risers. My first chat was with the camel milk–stand owner, who explained that he doesn’t always have a steady flow of camel’s milk, which is why he sells Sudanese chili cigarettes as well—a novelty we’d never heard of in Cairo. 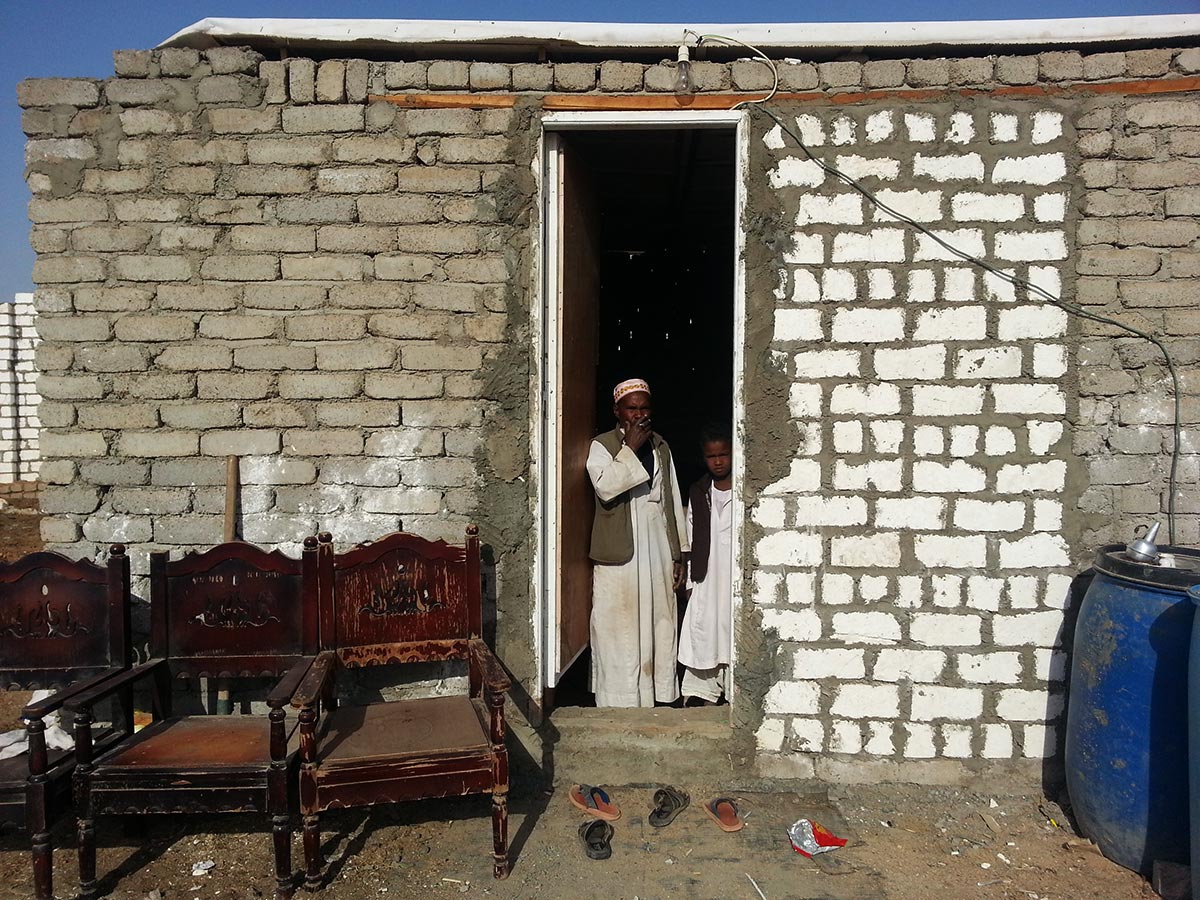 A local Bedouin in Shalateen.

We made our way to the goat market, where vendors welcomed us in a celebratory fashion. We childishly played with goats and took endless photos, and some of the locals even asked to take photos with us. It was an invigorating experience that was unfortunately short lived, as an hour into our market visit we learned that the rooms at our modest hotel were ready for us.

Completely sleep deprived, we crashed for a few hours before spending the rest of the day at a deserted lagoon, which we only reached after a two-kilometre walk with nothing to guide us but one local pointing to something hazy along the horizon.

While a fascinating experience, our stay in Shalateen and cruise of Abou Ramad were not the main highlights of our trip. The true adventure came at Halayeb, the poor town at the centre of the Egyptian–Sudanese dispute. Some claim the entire triangle sits over a wealth of gold and minerals, yet very little excavation has been allowed in the region due to the ongoing border dispute.

Two families mainly inhabit the area, the Ababda and the Bashareia, both Bedouin by origin and lifestyle. Locals told us the main way to differentiate between members of both families is whether they wear a black vest: the Ababda family supposedly wears one more often, while the Basharia tend not to. However, we found this method inaccurate in reality. 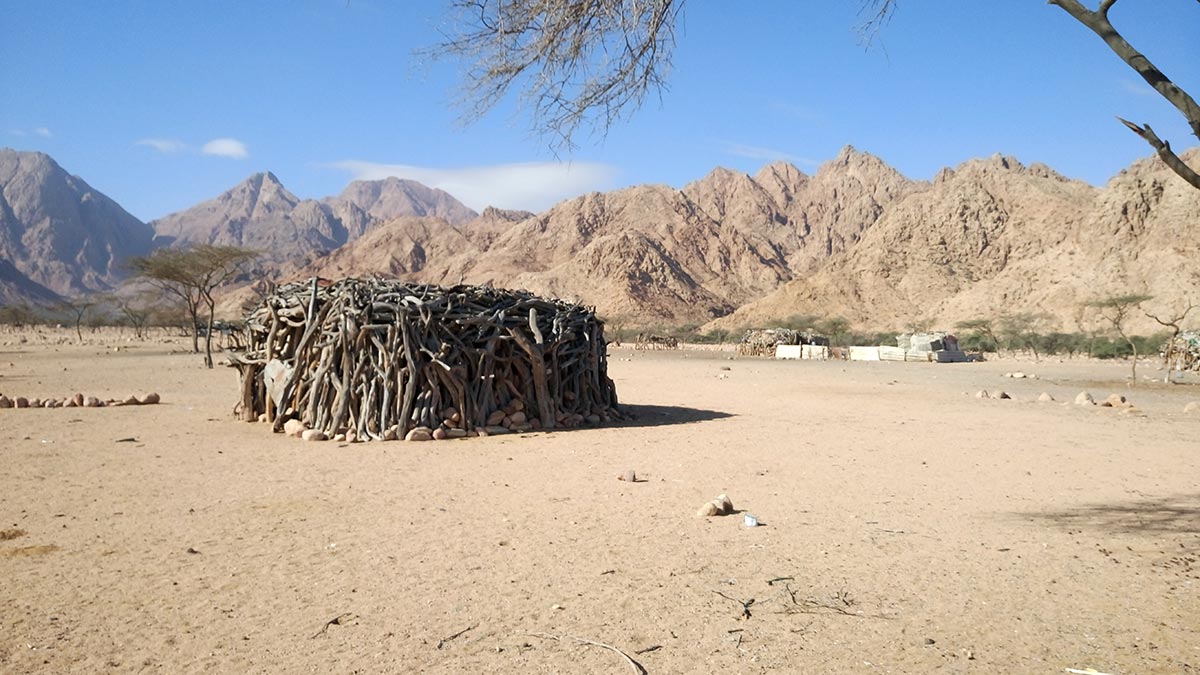 We woke up the second day at 3:30 a.m. to reach Elba Mountain (also called Gabal Elba) early in the day. The area is around 250 kilometres south of Shalateen, but our ride dropped us off at the closest army checkpoint to the mountains, where local Bedouins picked us up in their trucks.

As we nestled close to each other, sitting on blankets laid on the trucks’ cold steel floors, we began a wonderful adventure. Minutes after we started moving, the Bedouins veered off the main road, passing through vast planes of desert splattered randomly with small patches of greenery, which, at first glance, made the entire sandy landscape look greenish.

As we approached the base of the mountains, wild donkeys with horns appeared, intrigued by us and running alongside the trucks for what seemed like eternity, amazingly matching our speed. We also passed by beehive-shaped houses made entirely of raw logs of wood grouped together—we later learned these are homes specific to only the few Bedouin people who choose to spend time in this area.

The Bedouins here are different from the Bedouins of Sinai or the Western Desert in Egypt. Here, they are not used to hosting hikers, and tend to deal with problems as they arise. For example, our group spent hours debating which trail up the Elba mountain range would be best for our mixed fitness levels; even after choosing one, we changed courses in the middle, pushing our climb to noontime—an unwise idea given the temperature of the region. Reacting to the change in course, the Bedouins’ trucks kept getting stuck during the drive, requiring all of us to help figure out a solution—something that Bedouins in other regions rarely experience and tend to resolve in minutes with exceptional skill. Nevertheless, the authenticity of the sweet-natured locals was the perfect crowning touch to complete our experience. 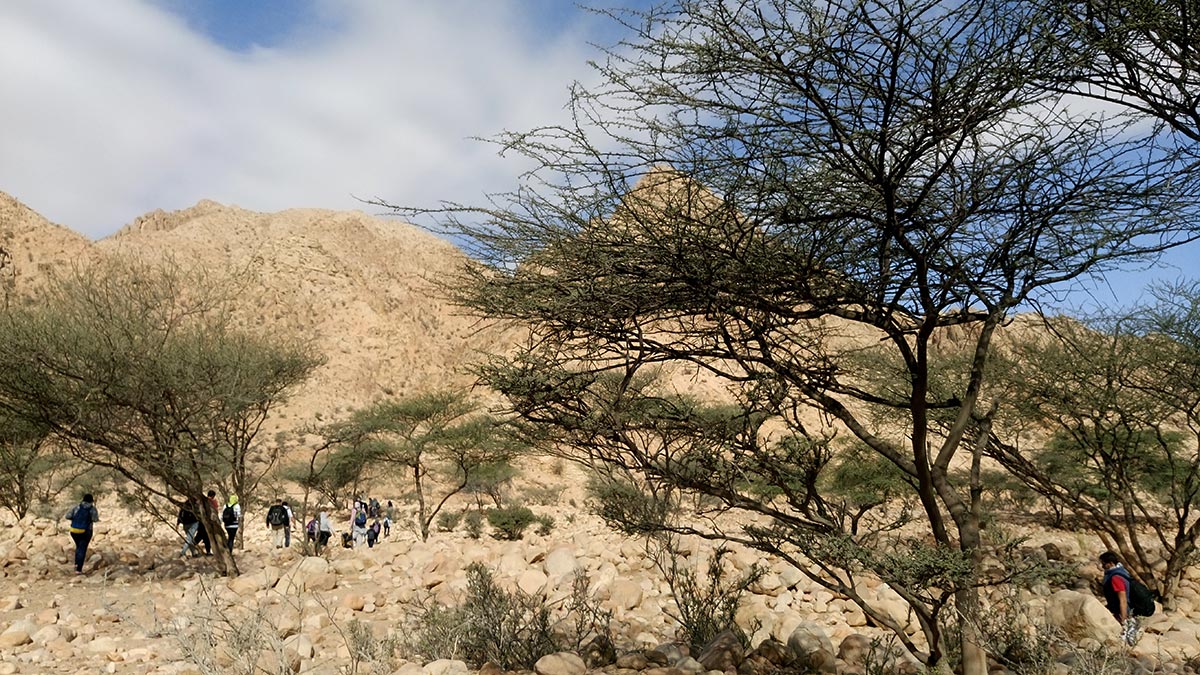 The stunning, barren landscape of Halayeb.

As we arrived at our destination, few words can describe the feeling and the view. We were at one of the shorter peaks of the great mountains, yet the view was breathtaking. We could see a vastness of a jagged landscape, the sun shining right above our heads and black crows hovering over the trees at the base of the mountain. The rock formations were incredible, appearing in all shapes and colours; while from afar they emitted collective reddish-sand tone, up close one could see a broad palate of greens, greys, spotted reds and yellows. The entire experience was serene.

The area is rich in remarkable wildlife, yet we didn’t get to experience much of it, which was mainly our fault given how quick our visit was. What this place really needs is an overnight stay with enough time to roam the lush virgin area.

Making our way back to the base, the Bedouins were waiting for us with a scrumptious lunch, which we enjoyed before lying on our backs in exhaustion. A couple of hours later, we began our journey back to Shalateen.

Parting Words from the Halayeb Locals

During our ride back we encountered what is locally called a dabouka, a flock of camels making their way from Sudan to the markets in Shalateen, then all the way through the country’s markets reaching their final destination in Cairo. The camels in these flocks are separated into categories; the ones sold off in Shalateen and other markets in Upper Egypt are mainly utilized for transportation, while the ones sold in Greater Cairo are the weaker breeds, strictly for consumption.

Spending the evening at one of the two coffee shops in the Shalteen market, we drank tea with halfa bar, an herb grown in the area; gabana, a spiced coffee attributed to Nubian culture; and sharboot, a Sudanese spiced date juice with a name hilariously similar to an insult in colloquial Egyptian. 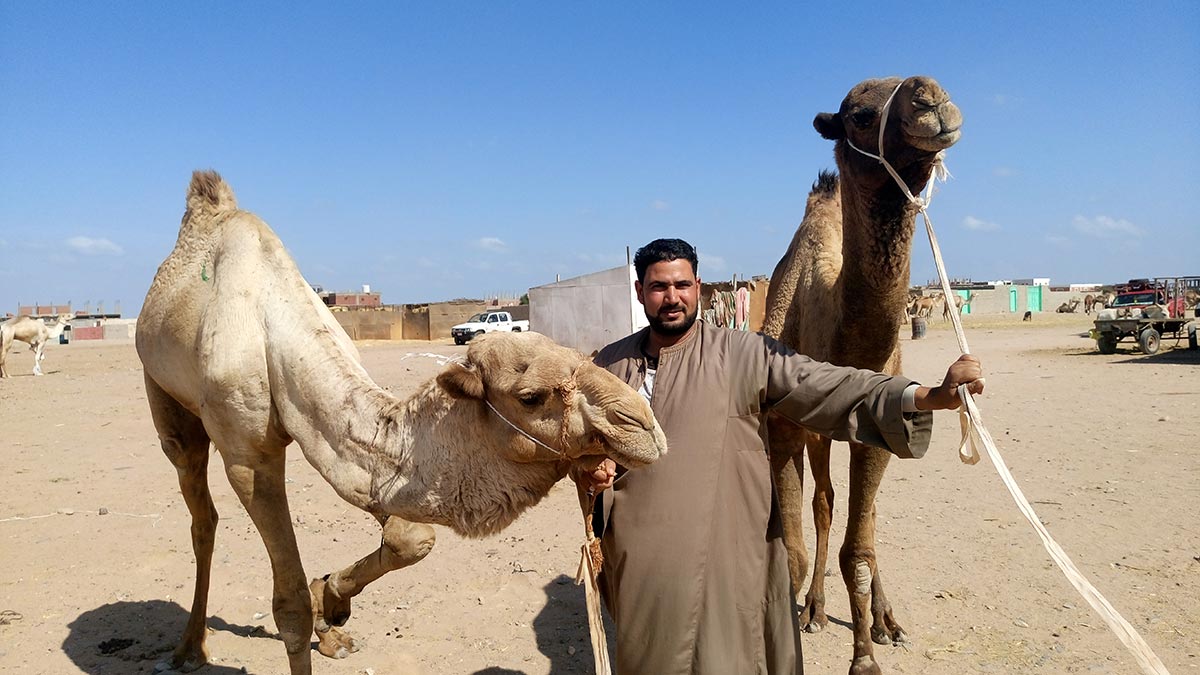 Anybody need a camel?

We ended our night in the early hours of the morning, allowing us only a few hours of sleep before visiting the local camel market. While worried about the reaction of local tradesmen to a group of naive tourists, we shyly approached the market, yet to our surprise all the traders were exceptionally welcoming, asking us to shoot photos of the market, their cattle and themselves. They were very excited to see the photos. Mind you, these are not simple Bedouins; they are traders well in contact with the modern world, and expressed great concern about the lack of tourism in their region. They kept explaining how much they wished more northerners would know about the beauty of this area, and asked us to help spread the word on social media.

As I climbed onto the bus taking us back to Cairo, I glanced one final time at this place, worlds away from where I spend my days, promising to return. I put my earphones in and turn my music back on, hoping I won’t notice the 15-hour journey back home.

Back in Cairo, perhaps no one explained the difference between our city and the south better than the taxi driver who picked me up from the bus terminal. “Oh my God, why on Earth were you in Halayeb and Shalateen?” he asked. “Let me stop and get you some food!”

Nadine is a Cairo-based writer exploring a tiny spec of the universe. She has 10 years of editorial experience, has been published in several industries and holds a master's degree in marketing.

Mexico: The Maya, Aztecs & Conquistadors Day of the Dead

What is the name of the tour company you used to visit Halayeb?

Looks very interesting and beautiful…can you get there at the moment?

Hi. Interesting article. I was traveling all over Egypt back in 1992 for around four and a half month. (Waiting for my Sudan visa for 2 of those months)
At that time I could not go further than Marsa Alam on the red sea coast. So therefor i wonder if this area no is open for foreign visitors?

Did you see any wildlife down there?