Like all great treks, the Chicamocha Canyon is not measured by its difficulty but by the impression it leaves on your soul.

Human evolution brought us to the edge of the 227-kilometre long Chicamocha Canyon in the heart of Colombia—with the help of handy inventions like planes and cars. From there, we relied on our bipedal abilities to hike the 12-km trail down to the Chicamocha River.

The canyon was already getting toasty when we set off, and our local guide recommended we each consume two litres of water along the way. That sounded like a lot—but we knew the canyon gets as hot during the day as it does cold at night. We stopped often to photograph the grand vistas that appeared at every turn, and soon the temperatures climbed from hot to downright sizzling.

But even with the sun melting us, I was happy to be there. I crave the outdoors in the same way people crave chocolate or ice cream (which I also do). And I find there is something elemental about hiking, as if it fulfills some fundamental aspect of human nature or better connects us with our past.

Located 54 kilometres from Bucaramanga, the 46-million-year-old Chicamocha Canyon is one of the largest in the world and bursts with geological history. Long ago, the region was a giant lake teeming with marine life, whose fossilized remains can now be found sandwiched between the canyon’s stratified layers, stacked two kilometres high in some places. The canyon itself was formed by the powerful forces of water washing away the soil, which is hard to imagine, given how dry it was when we were there. 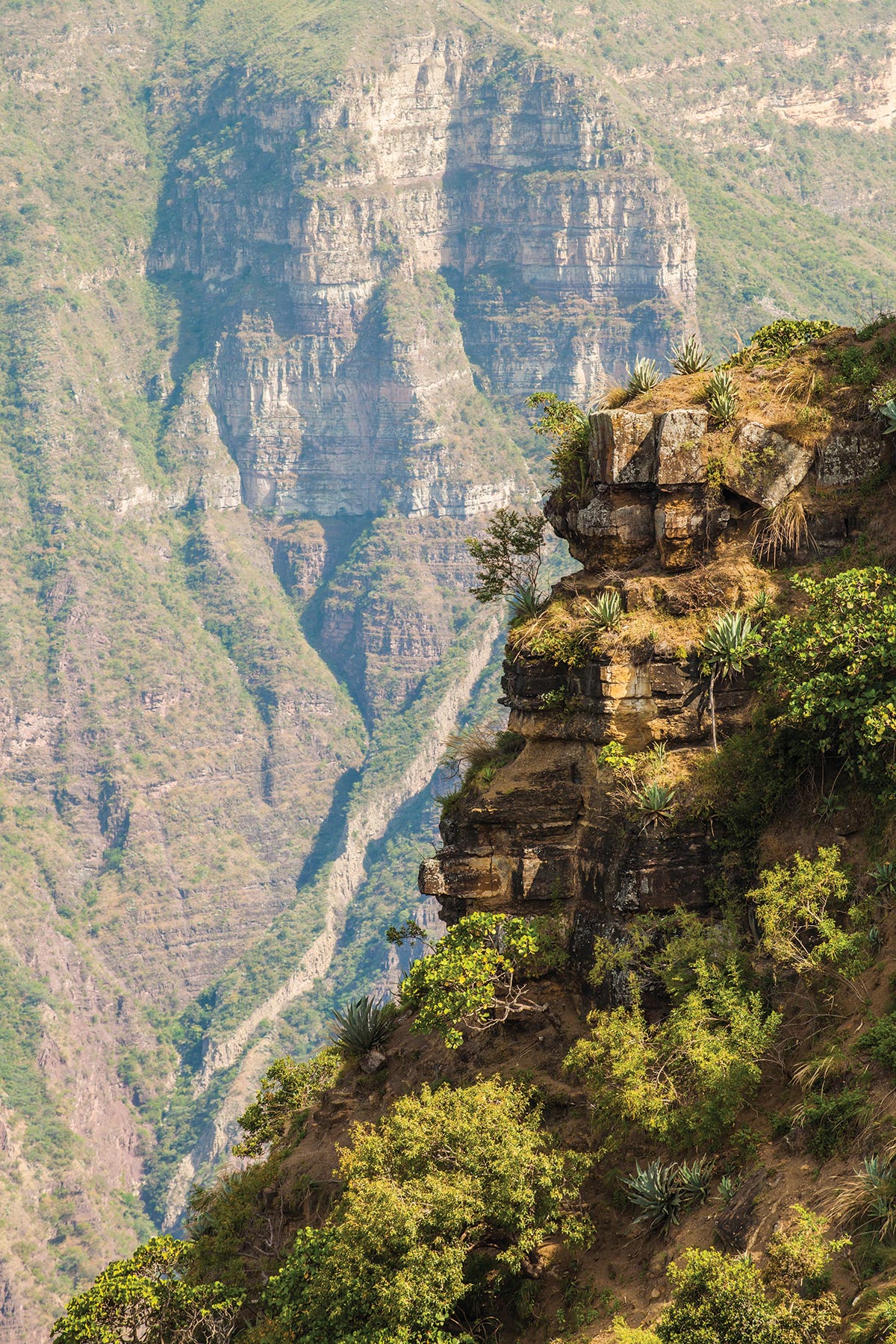 View from the top: the spectacular Chicamocha Canyon in Colombia!

By the time we got to the bottom, I recognized the wisdom of consuming two litres of water, but perhaps too late. I felt pretty heat-fatigued. After drinking several glasses of local fruit juice and popping some salt pills, I was soon on the mend and ready for more exploration of this truly incredible and utterly breathtaking edifice.

I don’t measure the greatness of a hike by my level of comfort, but rather by the impression left on my soul. Chicamocha definitely impressed me. Colombia is a hiker’s paradise, and the canyon isn’t the only game in town. One of the most popular parks in Colombia is Los Nevados National Natural Park in the Cordillera Central of the Colombian Andes. It offers a staggering amount of variety, from snowcapped volcanoes to cobalt-blue lagoons, with thousands of plant species as well as an impressive variety of mammals.

The park is also home to the 5,300-metre volcano Nevado del Ruiz, which erupted in 1985, killing an estimated 25,000 people, mostly by ensuing mud slides. Even today the park is occasionally closed due to volcanic activity, so it’s always best to check ahead before making plans to hike there.

From high mountains to coastal scenery, toward the northeast of the country near Venezuela, the Sierra Nevada de Santa Marta mountain range juts from the shores of the Caribbean Sea. The hiking opportunities are endless, including four-day to six-day treks to The Lost City (Ciudad Perdida), built by the Tayrona Indians sometime between the eighth and 14th centuries. Tens of thousands of indigenous people, including the Kogi, Wiwa, Arhuaco and Kankuamo groups live in these mountains. 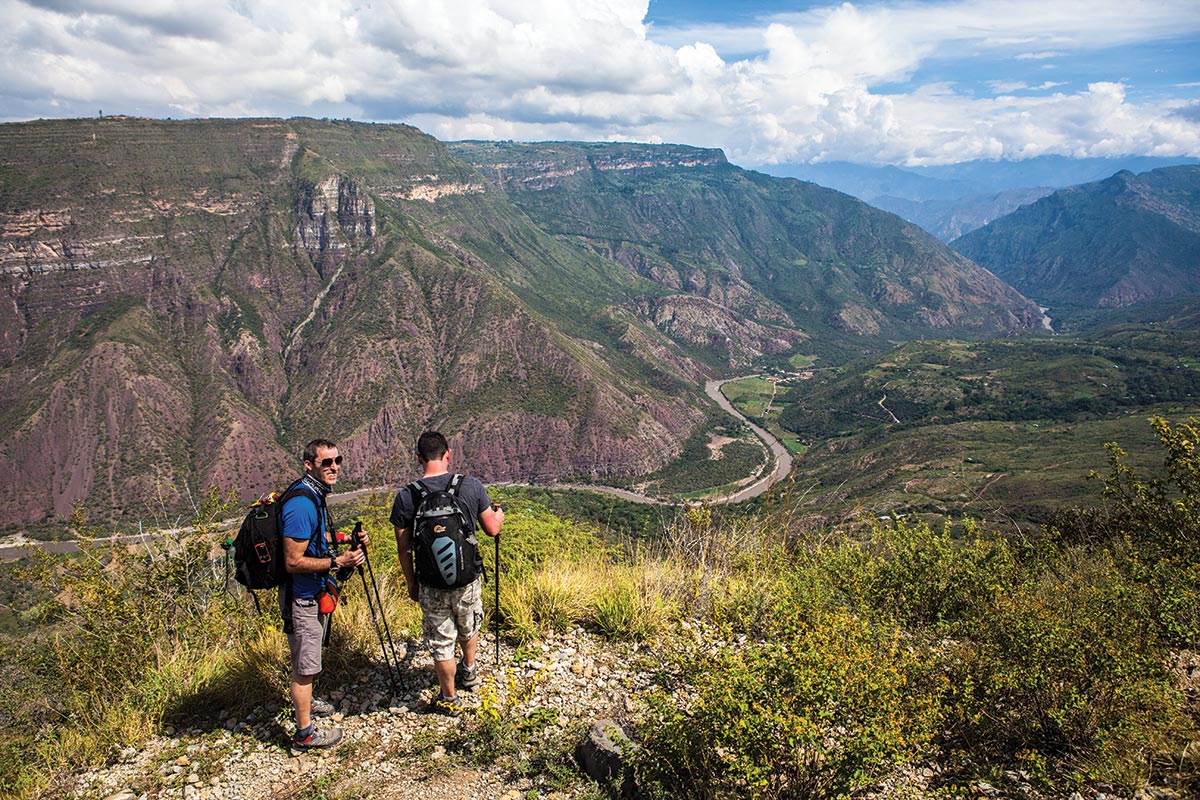 Millions of years in the making, Chicamocha Canyon is breathtaking at every turn.

If you’re a jungle person and like a bit of wildlife and some hot and steamy trekking, then it’s Colombia’s far south for you. Take a flight to Leticia, the capital of the department of the Amazonas, and hit the jungle trails. The Amazon is vast, wild and wet, and provides plenty of options to explore the natural world on its own terms.

Whether your ideal trek is high mountain passes or exploring ancient sites, being caressed by ocean breezes or hacking through verdant rainforest, Colombia’s hiking options are as diverse as the country’s wonders.♦

I’m planning on hiking the canyon starting from Los Santos, passing through Jordan and end at Villanueva. Is that possible? I would like to do that in one day by starting the hike really early.

If you could get back to me, that would be awesome. Thanks!

Good article! It is true that the Chicamocha Canyon is the perfect place for jungle lovers. And of course it is an excellent place to do trekking, rafting and observe nature. I would like to come back soon to experience again this adventure time. I share with you an article that shows the wonders of the Chicamocha Canyon: https://colombiabybus.co/destinations/wonders-chicamocha-canyon/