Wolves howl outside and I recall our pre-screening questionnaire: “Do you have a history of running off into the woods while on psychedelics?”

At the time I assumed it was a joke. Inside the cabin, we sit crossed-legged in a jittery circle amid low-burning candles. I’m third to be called forward. As I kneel down before the modest altar, the shaman pours about an ounce of viscous liquid into a ceremonial cup. “Here is your medicine.”

It resembles crude oil in the dark and tastes like wood and earth. There’s no turning back now. I return to my seat, ensure my purge bucket is within reach and wait for the ayahuasca to kick in. It’s already been a long, strange trip to this point: determining physical risks and whether an atheist should partake in this sacrament at all, adopting an Amazonian ceremony into the woods of Ontario. Yet the real journey—into the duskiest recesses of my mind—has yet to begin.

Not everybody has even had a drink before people begins moaning and “purging”—throwing up—which is an expected reaction to the drug that experts refer to as a cleanse.

Originating in rainforest cultures, ayahuasca is a brew concocted from Banisteriopsis caapi and Psychotria viridis with high quantities of dimethyltryptamine, which is commonly known as DMT. Similar to Mexican peyote, ayahuasca is considered a mystical medicine and is used by shamans to treat physical, psychological and spiritual ailments. Retreat centres catering to Westerners have recently emerged throughout the South American rainforest, and some hostels along the “gringo trail” offer weekend ceremonies for curious backpackers.

The trend has progressed so far that Sting, Tori Amos and a host of other celebrities have endorsed it, while Gabor Maté, a retired physician from British Columbia, praised the plant’s properties in the Globe and Mail in December 2015, attesting that he’s witnessed ayahuasca help people overcome substance addition, sexual compulsion and self-harming habits—while also conceding that “its very power to penetrate the psyche can awaken deeply repressed hostility and rage.” 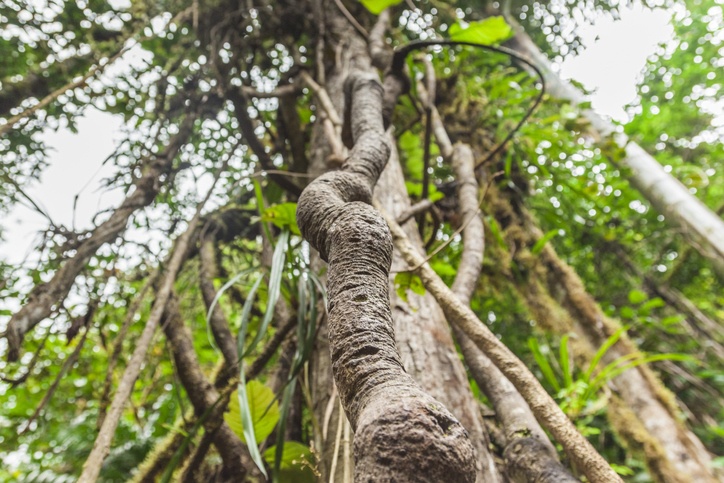 Most Westerners who seek ayahuasca do so with the intention of spiritual or psychological therapy; however, others just want to trip out. Likewise, while most shamans are honest and competent, there have been reports of rape by malevolent shamans, severe psychological damage due to improper pre-screenings and even deaths caused by pre-existing heart conditions, medication interactions or mixing in toxic plants. This past winter, a 29-year-old Canadian man, who says he was sober at the time, fatally stabbed a badly hallucinating 25-year-old Briton in self-defence when a fight broke out at a retreat in Iquitos, Peru.

But such unfortunate incidents happen less frequently than successful ceremonies. There is no shortage of guides on how to take the drug safely, all of which caution anyone with a known heart condition, mental-health issue, medication plan or dietary restriction from jumping in—to say nothing of the importance of finding a professional and well-reviewed shaman to conduct the ceremony.

After much deliberation, I decided against doing ayahuasca in South America. While I expected to emerge unscathed, nothing invokes a bad trip like the paranoia of possibly having a bad trip; moreover, I don’t believe in ayahuasca’s supernatural properties, and worried that indulging in the ceremony wouldn’t be culturally appropriate.

Years later, though, the opportunity presented itself on my home turf: my friend Lisa was going to a retreat hosted by a shaman from an Amazonian centre. I still wasn’t convinced it was “right” for a skeptic to imbibe ayahuasca, but given the safer environment I agreed to participate with an open mind. After many covert emails, a day of fasting and a $200 e-transfer, I found myself in a cabin in the woods.

I expect the three shamans to be Amazonian tribal elders, but they’re 20-something Western women. They explain the sacrament’s history and how they learned brewing techniques from indigenous shamans. They use qualifiers like “It is believed that…” and the phrasing invites me to accept the notions as folklore or metaphor, therefore easing my fears of being culturally insensitive by partaking as an atheist.

“Ayahuasca’s a medicine—not a magic pill,” affirms one of the shamans. “It changes your mental state and perhaps offers you a new perspective on whatever challenge you’re facing. But you have to do the work. You should come with an intention, something you want to heal within or discover about yourself, and leave willing to make the necessary changes.”

Her explanation resonates with me, and I take it even further. The altered perspective you’ll experience isn’t necessarily more or less valid than your sober one, I tell myself to sidestep any suggestions of ayahuasca as a miraculous psychological cure-all. It’s just different.

As part of the opening ceremony, we share our intentions with the group. Mine is to be less negative. I want to identify what incites me to rant whenever there’s a lull in conversation, a stinging cynicism that condemns me to a life of half-empty glasses.

After about 45 minutes, the shaman asks if anyone wants a second round, and I’m the first to accept. Minutes later, floral patterns blossom in the dark and I throw up into my bucket.

Not everybody has even had a drink before people begins moaning and “purging”—throwing up—which is a typical reaction and often interpreted as expelling anything unnecessary or negative within you. I turn to my right and notice Lisa face down in a ball. Yet I don’t feel any effect. The candles are extinguished and the shamans begin to chant and sing in Spanish, Portuguese and indigenous languages. Somewhat cranky after not eating all day, I start suspecting it’s all a scam.

There’s nothing psychedelic about these dirt smoothies! All this writhing and howling is just a placebo—and I’m out $200, I scowl in the dark.

After about 45 minutes, the shaman asks if anyone wants a second round, and I’m the first to accept. Minutes later, floral patterns blossom in the dark and I throw up into my bucket. Then I remember my intention and my ideas begin to take shape. I see myself as a sarcastic, grungy 17-year-old flopped on the couch watching television—except the screen is projecting my own thoughts and experiences. Young-me is in the midst of a running monologue, mocking the “shows” the way Beavis and Butthead would trash music videos. Some of what she says is annoying, but some is hilarious.

The hours pass and I grow increasingly ill—again, not uncommon during these ceremonies, but also not very comfortable. One of the shamans sits by my feet, offering tissues and a soothing presence as I puke. It isn’t until dishwater dawn spills through the windowpanes that I fall asleep.

I wake up still high, though less so, and everybody shares their experiences. Only then do I realize I’m unwilling to let go of my negativity because, as my 17-year-old self sardonically quipped, “Happy people aren’t funny.”

That was eight months ago. In the days immediately after I made the effort to be introspective, journaling frequently and “doing the work” as the shamans directed.

These days, I do feel more positive, or at least more aware of when I’m being negative. Whether that’s the ayahuasca or something else—like becoming a published author—remains unknown.

How to Spend a Perfect Weekend in Belgrade, Serbia

Question for you… would you consider doing it again? I’m curious as I’m about to attend a ritual.

Hi Sue, I’m in Ontario and would love to try aya for depression. If you could let me know where you experienced it I would be very thankful.

Did you get any feedback on your question?
Also searching.