Once endemic and chronic, damaging and deadly, tuberculosis was on its way to disease eradication. Now it’s back with a vengeance in some parts of the world, and travellers would do well to be prepared.

Watching tuberculosis ravish populations in 2007 is like watching history repeat itself. A hundred years ago, tuberculosis was the most dreadful disease of its day, with no vaccine, cure or effective treatment.

Patients were sent to sanatoriums not just to rest and get the fresh air that was thought to help fight tuberculosis, but also to take them out of circulation, preventing the disease’s spread to family members. Then in the 1940s came the wonder drugs—antibiotics—one of which proved immediately effective at killing tuberculosis bacteria. Suddenly tuberculosis became not only manageable, but curable, and by the 1970s was on its way to becoming an endangered disease.

Well, it’s back, now wreaking havoc in the developing world largely because of HIV—a virus that attacks the immune system and makes anyone with it more likely to become sick with tuberculosis.

As HIV rates have skyrocketed around the world so has TB. In 1993, the World Health Organization declared it a global emergency and launched the “Global Plan to Stop TB”—a mission that, the WHO hopes will cut rates dramatically over the next decade.

Although it hardly seems possible, the WHO estimates that up to one-third of the world’s population—over two billion people—is now infected with TB bacilli.

In fact, it is entirely too possible to rack up such shocking statistics, mostly because of the way TB bacteria operate. The one-third estimate includes all people who are thought to have been infected with the bacteria but are not actually sick with TB disease. Most people who get infected won’t even know it because when TB bacteria are inhaled from an openly sick person, the microbes can lie dormant in the lungs for years, sometimes a lifetime, without a person ever getting sick. 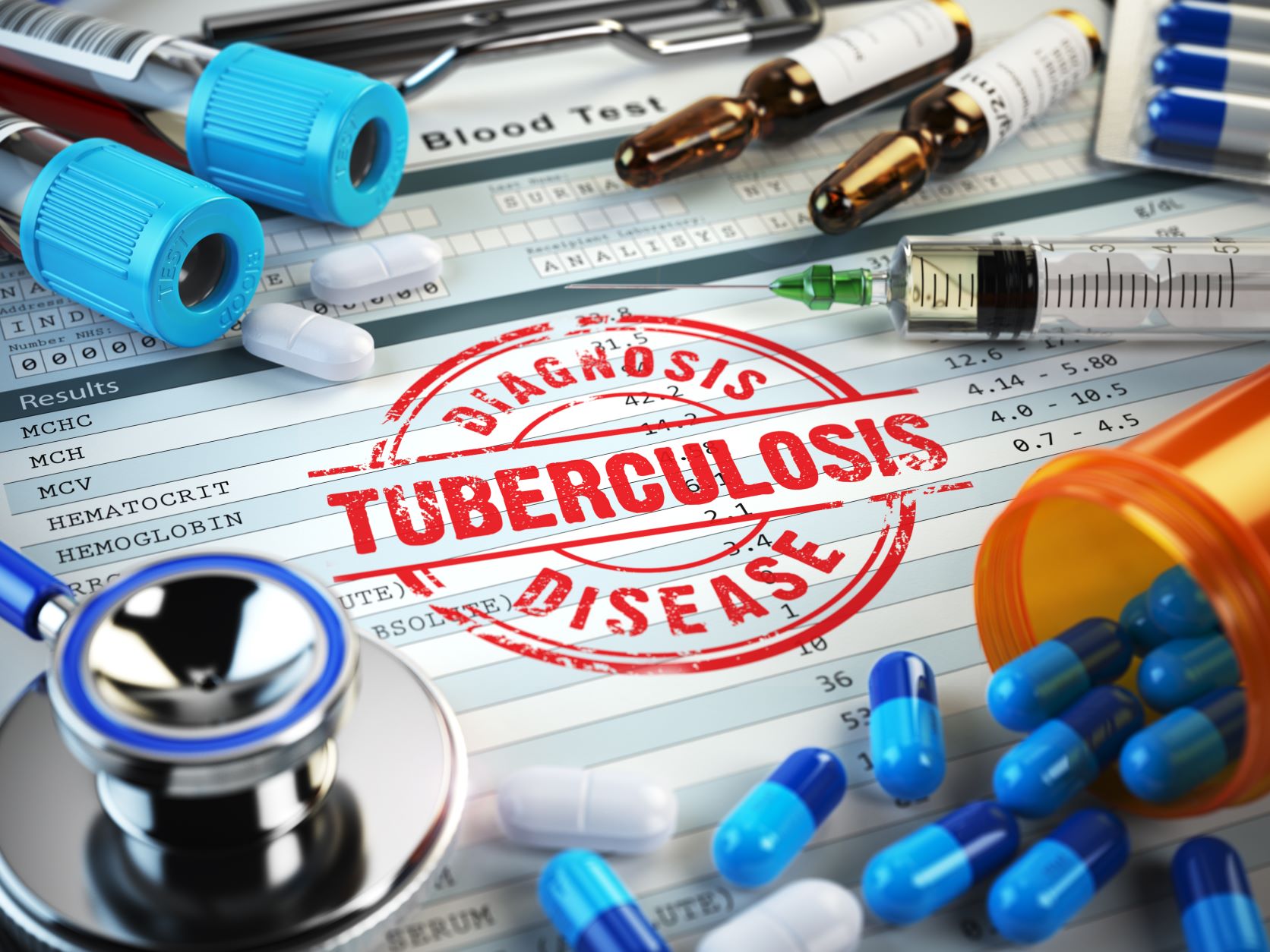 Without a widespread effective vaccine, tuberculosis (a bacterial disease) is back on the rise across the world, with underdeveloped regions and communities the most vulnerable. (Credit: Bet Noire-iStock)

Only five to 10 percent of non-HIV infected people will become ill with TB and the incubation period is months to years. While there are other forms of TB (it can grow in organs and tissue), only pulmonary TB, or TB of the lung, is really contagious. It’s also the most prevalent form worldwide.

Luckily for travellers, although TB is endemic in many countries and transmitted person-to-person, it’s harder to catch than most infectious diseases. You can’t get TB through toilet seats or handshakes, or by sharing glasses, dishes, towels or clothes. Only someone with active TB—who is exhibiting symptoms—is contagious to other people, when the bacteria are present in sputum and spit and get passed by coughing, sneezing, shouting or laughing.

The bad news is that people travelling to regions where TB is widespread are identified as a high risk group (though paradoxically, TB is considered low risk to travellers). This can be of concern for two reasons. If you have unknowingly inhaled TB bacteria on your round-the-world dream trip, there’s a chance you’ll become sick during your lifetime, if for some reason your immune system is weakened.

Age can do this, so can alcohol or drug abuse, and chronic conditions like diabetes and cancer. Suddenly that little cluster of bacteria walled off in your lungs when you were 25 and backpacking through south-east Asia starts to grow. Secondly, while certain antibiotics are used to treat TB, they’re becoming less effective each passing year. Drug-resistant TB is a major obstacle in the fight against the disease, in some places compromising chances for survival. Perhaps the best reason to avoid getting infected is that by the time you may need treatment, a cure may no longer be so firmly guaranteed.

Outpost: TB is considered low risk for travellers, but with TB endemic in so many countries could this change?

Dr. Elizabeth Rea: A lot of TB in Canada is from people who were born overseas and you could put expats in there—people who live for a longtime in an endemic country, then come to Canada and at some point become ill…[But] in the years I’ve been doing this I can think of two [cases of TB in travellers]. One was an adult, who was travelling for months very much off the beaten track—taking local buses, local trains, staying in local guest houses—and became ill with tuberculosis about seven months after returning home.

OP: It’s said you need “prolonged exposure” to a person with active TB to become infected. Can you explain what this means?

ER: TB isn’t nearly as infectious as the common cold or chicken pox. When you look at the transmission of TB, the overwhelming risk is to people who live in the same household, who spend day after day in the same room with the same person [who has active TB].

OP: Is that how you define prolonged exposure?

ER: Yes. Now that said, some people are simply more infectious than others. If someone is very ill their lungs are full of TB and they have more to cough into the air than someone who is not as sick. That does make a difference, because if someone who is extremely infectious happens to be on your bus then yes, in that rare circumstance, on a long bus ride with the windows closed, somebody else might catch it, even though it’s just an eight-hour stretch. But that’s unusual. By and large the biggest risk of catching TB is living in the same household. So for people who are not just travelling, but living and working overseas, TB becomes much more of an issue.

OP: What precautions can travellers take if they’re going to a TB endemic region?

ER: If you’re on a bus try to sit near a window. If you’re sleeping in group accommodations, it’s better to be close to an open window. The greater the ventilation, the lower the risk. And, if you can, try not to be near someone who is clearly ill.

OP: Though a vaccine has existed since 1921, it is not widely used, even for travellers. Why not?

ER: Outside of a handful of situations, like people going to do medical work, it’s not worth taking the vaccine as it only has a 50 percent effectiveness rate against adult forms of TB. Its greatest value is for babies.

OP: If a traveller thinks they may have come in contact with TB, what should they do?

ER: The first thing is not to panic. Tuberculosis operates over months and years, not days and hours. There’s no immediate risk. The general advice is if you’re going to a TB endemic country for a long period—three months or more—get a TB skin test before you go and after you get back. That’ll help sort out if you got infected overseas. A TB skin test may not turn positive until eight weeks after you’ve been exposed. If you do end up taking treatment, or you do become ill with TB, it’s absolutely critical you take the medication the way you’re supposed to—otherwise, you can set yourself up for drug resistance.

OP: Cows can be infected with TB, and people consuming unpasteurized milk are at risk. Travellers often experiment with local food—what advice do you have?

ER: [Cow milk] used to be one of the regular routes of infection, so there’s a system of TB control in herds in developed countries. But [bovine TB is] still prevalent in developing parts of the world where there’s heavy reliance on dairy. There’s no reason not to drink the milk, but make sure it’s either pasteurized or boiled. For latent TB infection (have bacteria but are not sick): mono-drug regime of one antibiotic for up to nine months.

In From Istanbul | An Expat Profiles his Hometown of Bari, Italy

When the Desert Nomads Gather: The Cure Salée Festival