To see the mountain every day instills the question: what does down here look like from way up there? One traveller trekked up Mount Pico to find out.

Story and Photos by Shaun Pett

It starts with the coffin. Polished wood and metal, set in the hallway of peeling grey paint on the ferry travelling between the Azorean islands of Faial and Pico.  Everyone has to pass it when we disembark, pass the weeping son weak against the wall, everyone paying silent respect and miming the Catholic cross. Romero traces the four points of himself. Death spooks him, more so it seems that he’s leading this group of old friends—mostly unfit, mostly under-prepared city dwellers—to the summit of Portugal’s highest peak, Mount Pico.

And then, when we’re all assembled, Romero does a head count. Thirteen. I’m the unlucky addition to the dozen, drafted into this expedition while visiting my friend Nadia in the Azores during the great holiday repatriation of emigrants in August. Some of these friends, like Romero, have climbed Pico before, while others, having grown up in its shadow, have always wanted to. 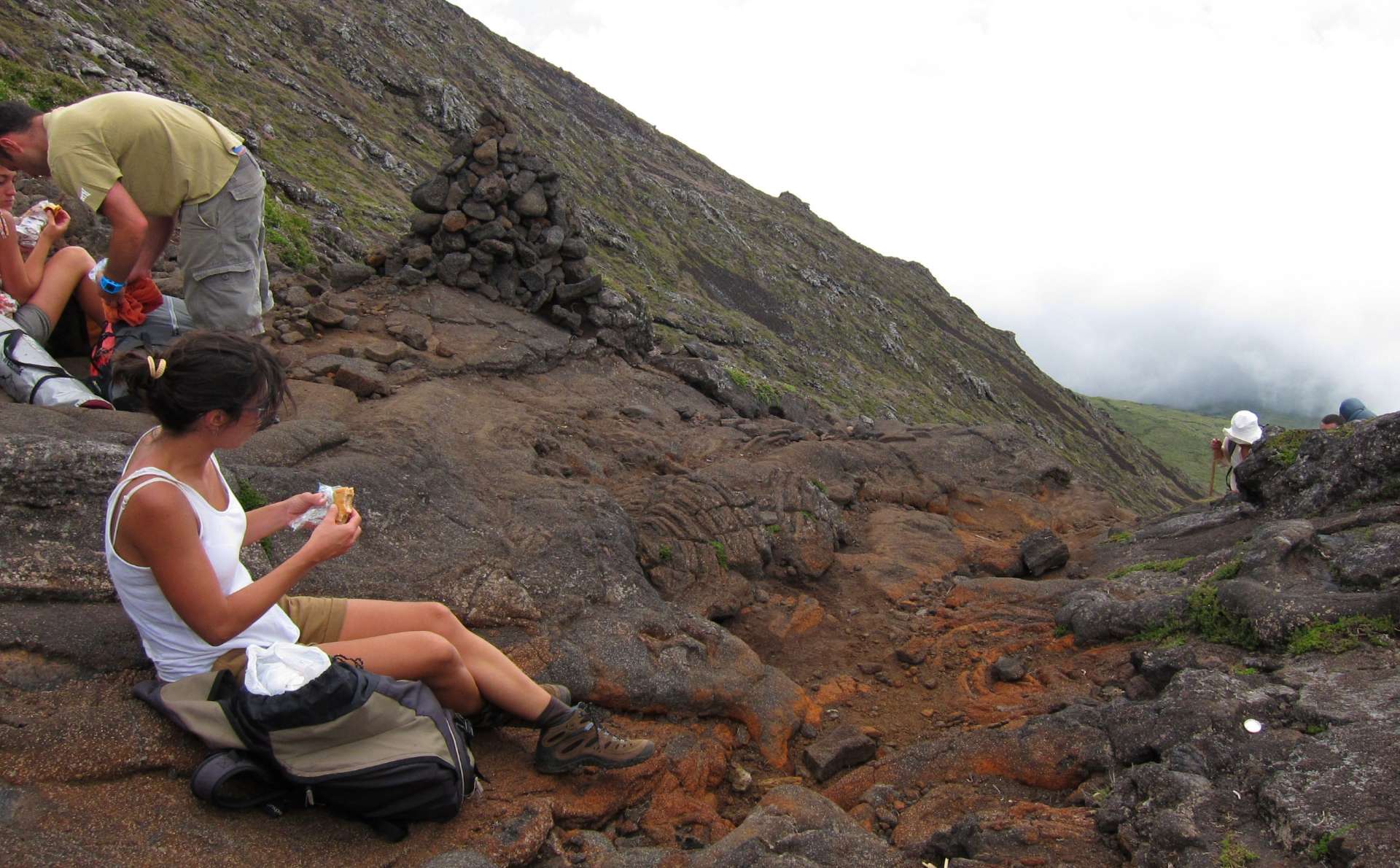 Stopping for lunch half way up.

For islanders here, Pico is a lodestar that orients their daily lives. To see the mountain every day instills the question: what does here look like from up there? I had no such questions coming from the flat of Ontario; now, having seen Pico for the first time I, too, am curious.

We catch taxis from the dock and our grandmotherly driver nudges her bumper into a cow blocking the road. It stares at us with a nihilistic “do it, whatever” before sauntering off. At base camp, which sits a kilometre up the 2,351-metre (7,800-foot) mountain, we sign in with passports, borrow a GPS tracker and watch a safety video. It is low-budget, scare-you-straight fare for a mountain whose moderate to difficult terrain and unpredictable weather have claimed victims before. Broken bones. Lost hikers. Death. 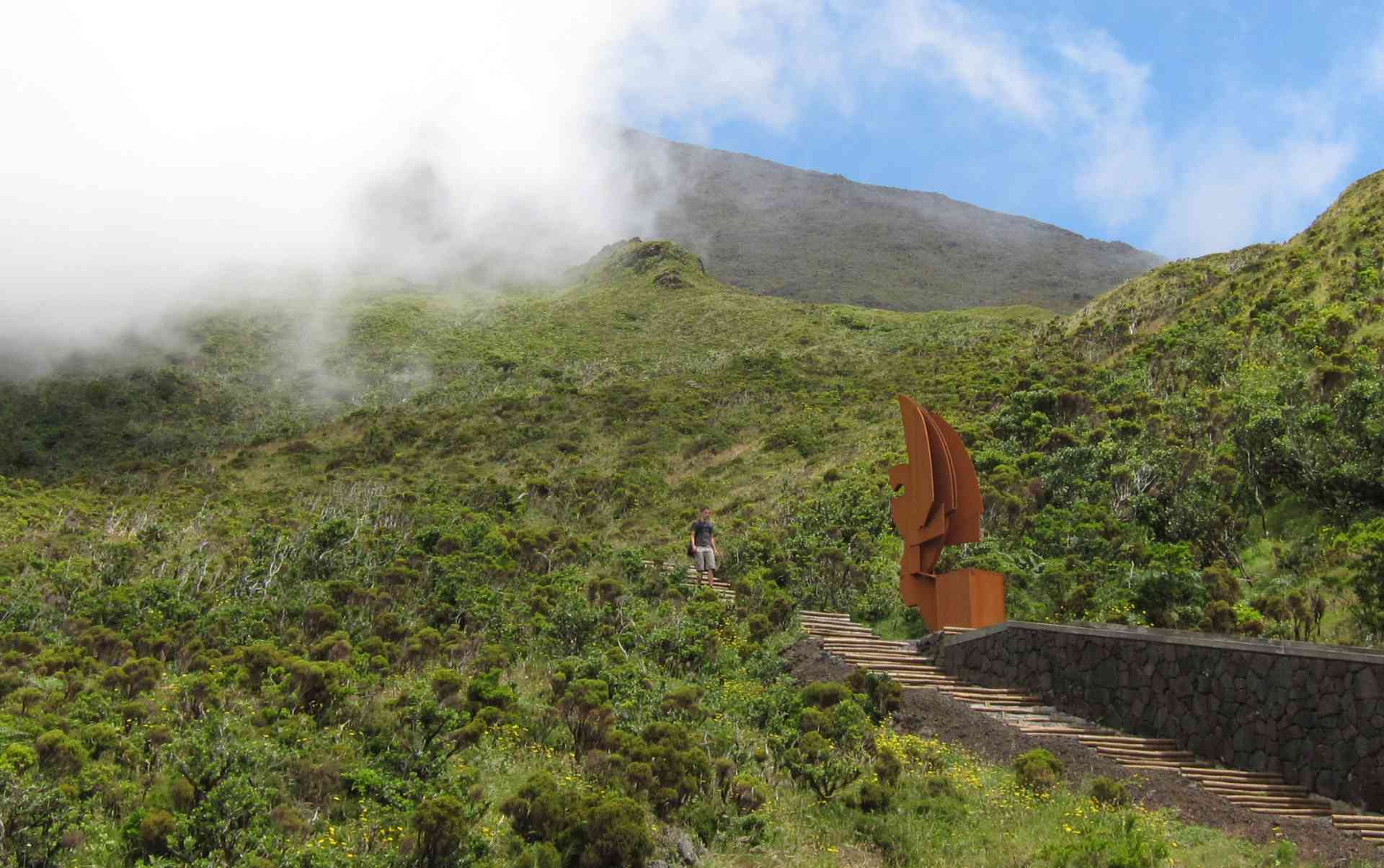 The trek up, doable and worth it.

But we still believe in our youth, even though 15-year-old Lorenzo is the only one that truly embodies it, and our steps bound with optimism onto the path that’s worn separate from the green lichen. We pass the first of 45 guide posts that mark the 1,350-metre ascent. The group clumps tight, excited and confident, old friends talking and joking. 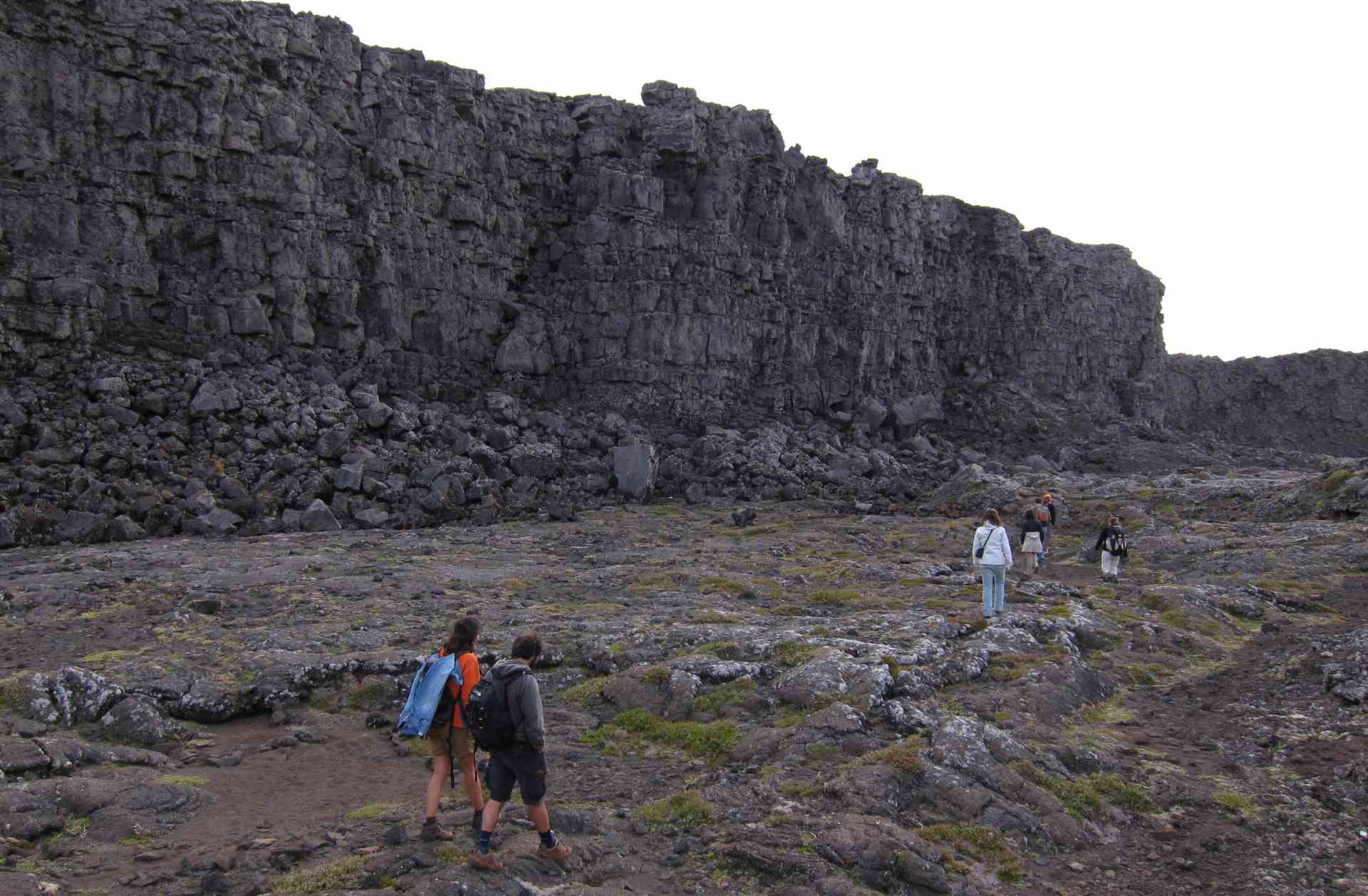 I don’t understand Portuguese so I focus on the timbre of their voices, how this strange tongue sounds like an inebriated Sean Connery speaking in an Eastern European accent. Soon clouds roll over us and the island disappears below. Day trippers pass us on their way down, some towing quiet and disaffected children whose easy bodies say the seven- to eight-hour climb is no big thing. And we don’t think it will be, as we’re spreading the hike over two days in order to overnight at the top for tomorrow’s sunrise.

But the incline increases about halfway up and the path disappears when we rise beyond vegetation into a landscape of rusted grey volcanic rock. All that we stand on has bubbled and burst hot from the open wound of the Mid-Atlantic Ridge that splits the ocean floor from north to south. Geologists call where the Azores sit a Triple Junction. 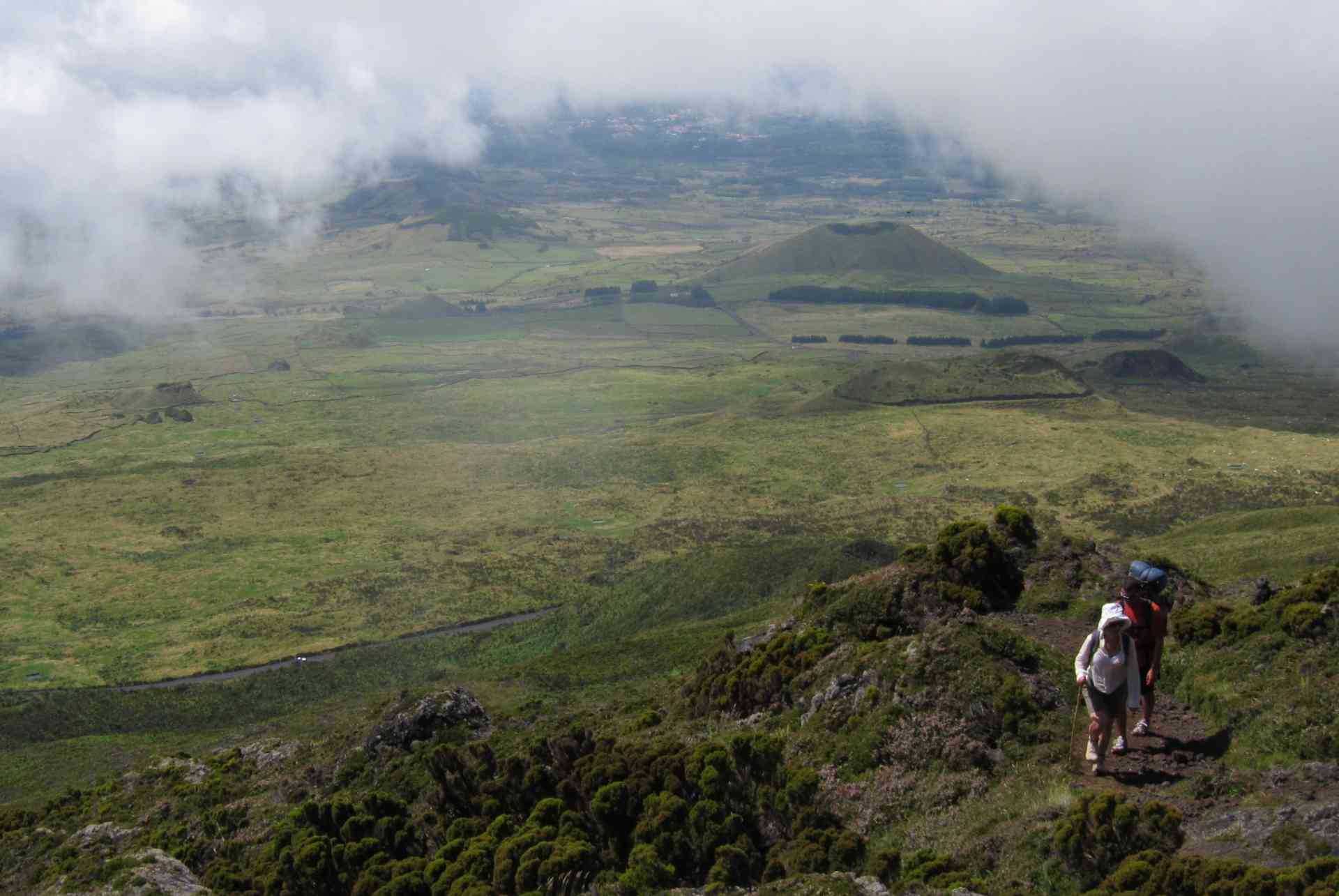 Mist rolls over the rolling hills.

Here the North American, Eurasian and African tectonic plates grind away from each other, continually creating the islands’ dramatic beauty—Atlantis is even rumored to be buried in these waters.

Pico is the youngest of nine islands, having erupted into existence some 300,000 years ago—its volcanic cone was added about 17,000 years ago and it’s been almost 300 years since the last eruption, though there was a debatable one in 1963 off the coast.

Sharp slabs of scree pile and wobble in the crannies of the path, each step the potential for a sprain. We pause often, at first on grassy plateaus, then on rocky outcrops. A wrapper blows away and our impulses jerk to grab it, but we’re stopped by the edge and the nothing beyond it.

The group at the top, mesmerized by the view.

Close to the top a pocket of rain slides over us, and though we’re sweating and throbbing it’s too cold to refresh at this altitude. When the clouds part the world below is small. How far we’ve risen, how high these unfit limbs have carried me. Then posts 41, 42 and 43 come quick; we wind around the side of the mountain and 44 appears, with 45 staked in at the lip of the crater. We exhaust cheers and descend into Pico Grande and its rolling lunar landscape. To the right the mountain continues to grow into the forbidding Piquinho peak. But we put that out of mind. Ascension waits till tomorrow.

We set up camp, don warmer clothes and eat what provisions we have—a sandwich, cookies, some chocolate. Not enough. As dusk dims we sit on the edge of a sheer cliff to watch the sun set beyond the island of Faial into the totality of the Atlantic. Romero produces a bottle of Licor do Amor and plastic shot glasses and we sip the unctuous blackberry liqueur as the sun catches fire in the water and sheds colours.

The booze warms, and the sun burns through orange and purple and pink and red. In the gloaming I watch a line of bobbing headlamps angle down from the peak and make for their Scout camp on the far side of the crater. Some other illuminated tents hover in the dark distance.

A full moon is our campfire. Ana, an osteopath, gives my friend Ze’s aching body a treatment on a sleeping bag. Our bodies say the time is late. We go to bed.

For what seems like hours the five of us try to will ourselves unconscious. Limbs numb, thoughts churn. I shift and the space is colonized by another. I stretch out my arm and realize it’s not coming back. Groans turn to hiccup laughs in the absurdity of the situation and we all admit to being awake. A flashlight sparks and cookies are passed around the circle. 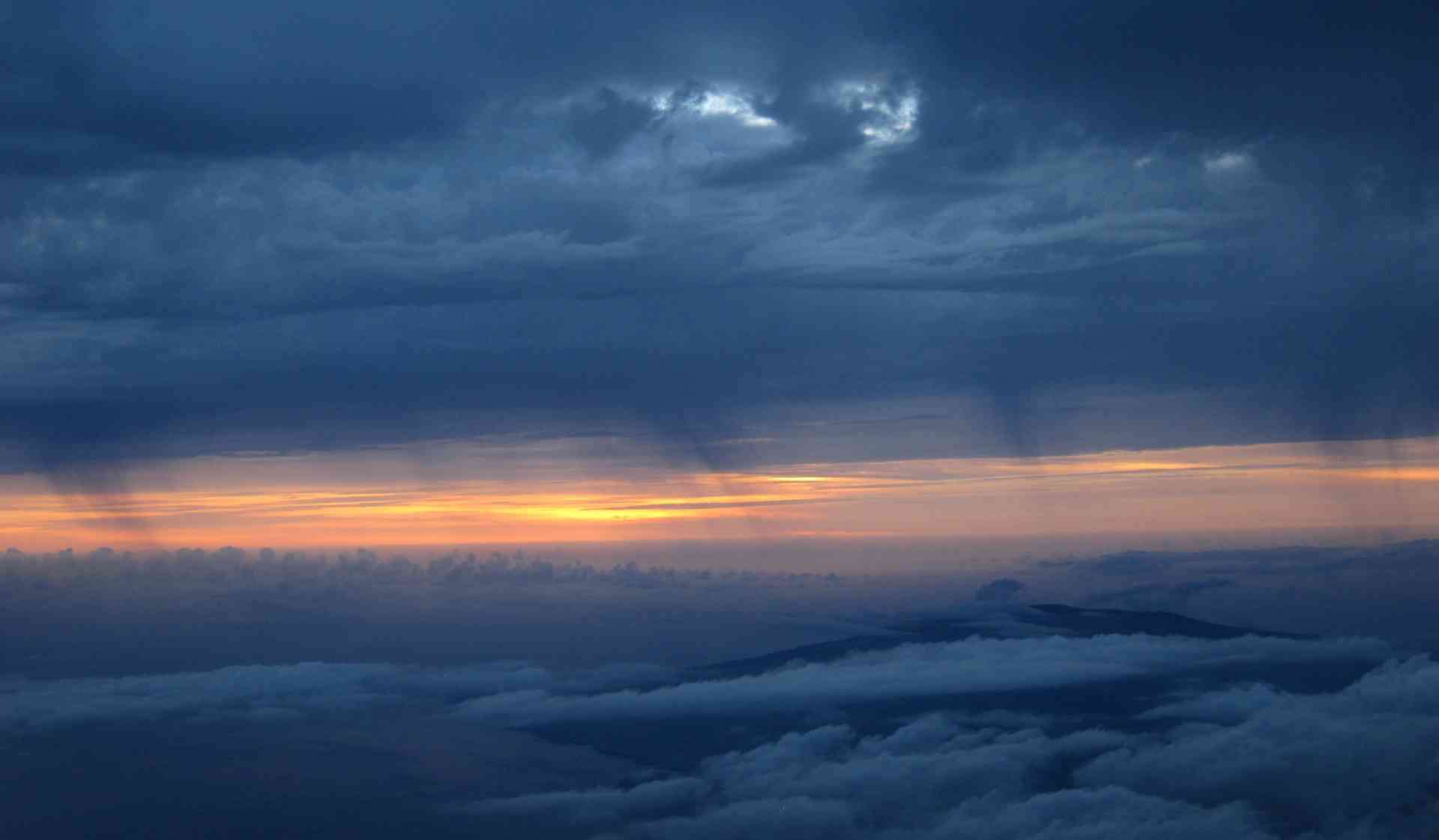 View of the sky from above.

We’re high from the exhaustion and Portuguese sloshes around and between us. Ze says something and laughs. The others laugh. And I laugh at the laughs. Because anything is funny now and because I don’t want to be left out. We don’t care about the other tents of friends or strangers, whether they slumber or struggle. Everyone is coming down with us.

But we try to sleep again and soon someone is snoring. We elbow them, not because they’re keeping us from sleep but because we resent them for the success they’ve had. Then Romero’s alarm comes on us like a bad dream. There’s the bustle of preparations outside, the whizz of zippers and swish of fleece. With time short to sunrise, we miss breakfast and stumble forward on adrenaline.

As the sun sets.

Romero marshals us straight across the jagged crater as night pales at the edges, my footsteps aimed in the bouncing circle of a headlamp. The ground arrives sharp and fast like the rushing horizon of a first-person shooter.

Soon we’re ascending, but it’s much steeper now and I can see no path. Just ragged rock to climb straight up to navy sky. I glance Scouts summiting from another angle and know we would probably be following them if we had the time. Romero’s orders fall from above along with tumbling scree. Each hand grip, each foot hold must be sure, he says. Cold gusts of wind bully me and I lean in, hanging on more than two kilometres above the Atlantic. Razor edges of volcanic rock sting my hands. I glance down. 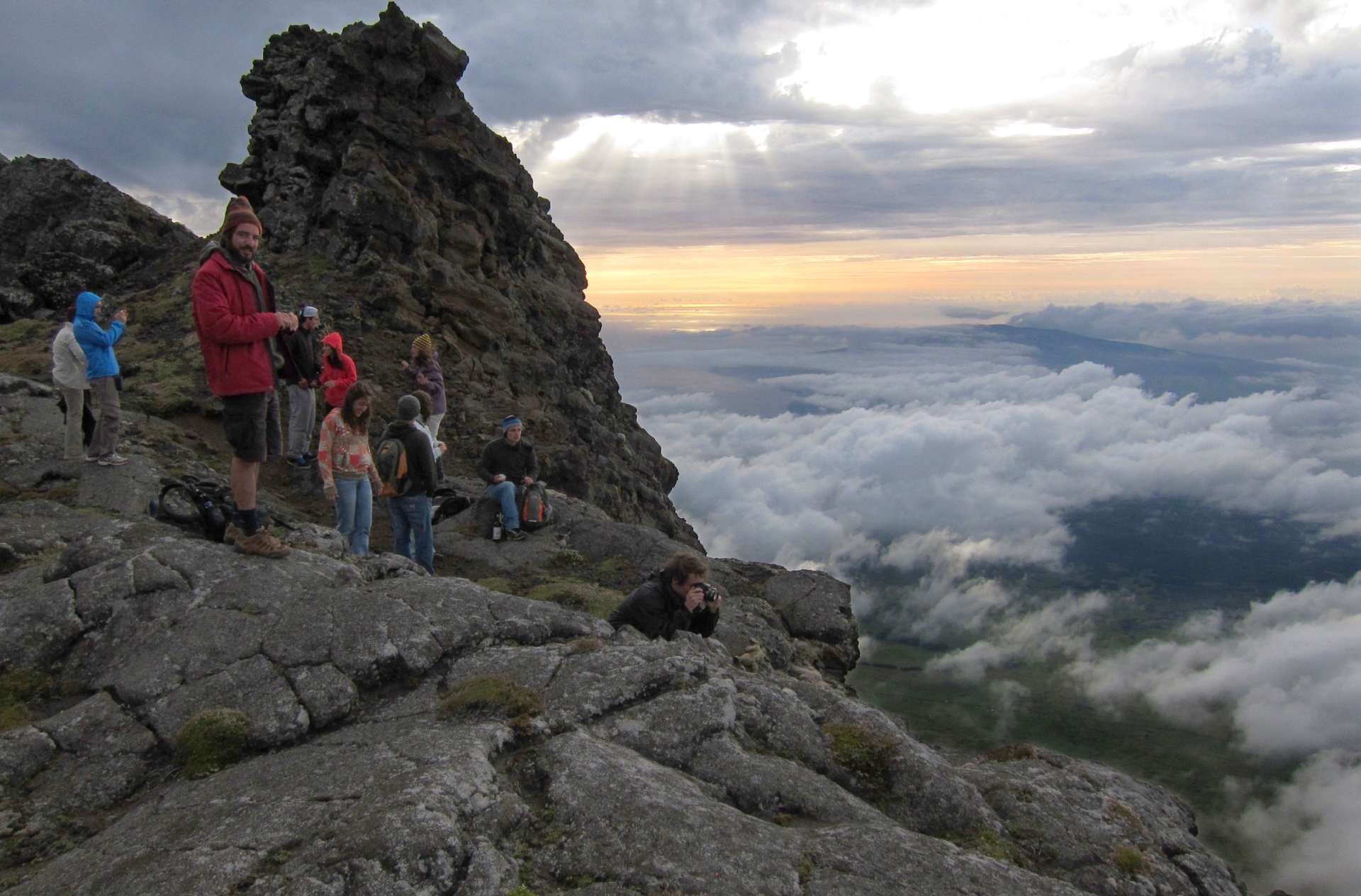 The author, standing in red, with view from the top!

Nadia has looked below, too. She shouldn’t have done that. Heights. She presses her body flat into the rock and freezes. A foot above dislodges earth and rocks the size of fists rumble past. As I test my weight on a ledge and search for a secure handhold, I suddenly think there should be carabiners and rope and crampons. Like an inchworm we rise, one after the other. I keep thinking it must be the next rock and we’re each in the silent focus of survival when the crest materializes.

The Scouts are already on top, perched on boulders like pubescent gargoyles wrapped in blankets. Some tourists from Lisbon huddle behind tripods and DSLR cameras. Light smears across the horizon. There’s the island of Sao Jorge below, long and spiny, like a slumbering crocodile. Two more of the central Azorean islands are dark humps in the distance.

Stand on a beach and you can see five kilometres before the Earth curves away. From atop Pico your world expands to nearly 600 kilometres, almost like spying New York City from Toronto, and in every direction is the grey Atlantic; south to Antarctica, north to Greenland, nothing in between. Drain the ocean and Pico would be the tallest peak in one of the world’s longest mountain ranges that nearly reaches from pole to pole.

Sunrise spreads out like a stain across the sky, yellows and oranges, the birth of colour. (Each day begins like this while I sleep.) There are no ooohs or ahhhs, just the quiet reverence for the dawn. We revel in it. Photograph it. Film it. The tourists from Lisbon crawl to the edge of the abyss for a more dramatic shot, tempting a wind to punch them off.

It’s surprising how quickly it’s over. The angle changes and the colours seep away into flat day and we leave. Now that we can see, our path up is revealed to be the steep, dangerous way it felt. Descending is harder because you constantly see below, see where you will end up broken if you fall. Given the terrain and some of our fitness, it’s amazing none of us do.

When we return to camp it feels as if we’ve already been climbing for hours. The hike down is a controlled fall, a precarious agreement with gravity. The line stretches out to the point where the front and end can’t see each other. No longer a group, we are each of us at one with our suffering bodies. So, naturally, the cursing begins: Portuguese invective spiked with choice English slurs that is spat at the mountain, the rocks, the sun, our shoes—all is to blame.

Finally the trailhead appears and a glorious cold beer refreshes us at base camp. We’re in varying states of decay and ecstasy. A taxi down to the harbour and we strip to underwear and leap into the ocean and the saltwater bites us alive. After a cheeseburger we hop the ferry back to Faial. Quiet now, we slump into the hard plastic chairs and watch Pico off the stern, looming like a crashing wave.

I picture what we look like from up there. The smudge of this boat slipping toward Horta, the city like grey speckled moss on the edge of Faial. I can’t see us or anyone else, absent but for our traces among sea and sky. The group parts at the dock and we each carry away our accomplishment but also our humbling, how small our daily worlds, how little we see.

Shaun Pett is a traveller and writer-journalist who lives in Toronto, Canada.

The Outpost Mini-Guide to Travel in Arizona