Vienna is one of Europe’s beauty capitals. Yet what strikes our author, who was on a whirlwind tour of Central Europe (and writing about it for Outpost) was not so much its architecture, but its culture as a cosmopolitan and vibrant city.

Vienna is, without any doubt, one of the most beautiful European capitals, and exploring the Austrian capital is an utterly pleasant experience. During the day, tourists and locals alike walk along the wide boulevards of the city centre; even when packed with people, the streets do not lose their elegant and neat appearance. Kärntnerstrasse, for example, is the main shopping street that cuts through the old city, and makes for a perfect stroll even for those, like me, who are not keen on shopping.

While others were browsing shops in search of souvenirs and Vienna’s famous pralines, I could admire the charming buildings lining the street, including the majestic St. Stephen’s Cathedral, a 12th-century Gothic masterpiece that stands out in the heart of the old town.

Yet the first thing that struck me was not the architecture, which I had anticipated loving, but rather the number of immigrants from all over the world. What I expected to be a conservative and formal city revealed itself as a cosmopolitan and vibrant one. Ottakring, the district where we stayed, is populated mainly by immigrants from Turkey and the Balkans. Brunnenmarkt, the city’s largest street market, was located exactly on the street of our apartment. For me and my girlfriend, Angeliki, who have been living in Turkey for years, it was surprising to find a “Little Turkey” in Vienna.

Wandering around the city, it’s all but unusual to find the classical lines of old monuments side by side with innovative design elements: sculptures, graffiti, art installations or whole buildings. The contrast between classic and modern is a recurring theme here and one of Vienna’s most fascinating traits.

The most striking example of this is probably the Museumsquartier, a vast cultural and recreational complex comprising courts, shops, cafes and about 70 institutions representing all expressions of art, housed in historical and contemporary buildings.

It makes an impression to see hundreds of youngsters hang around in this unique architectural ensemble in the warm summer nights.

For architecture enthusiasts, Vienna is a real mecca. Wonderful examples of disparate architectural styles are scattered virtually all around the city. The Secession Building, with its golden cabbage dome; the KunsthausWien and the Hundertwasserhaus, with their irregular and multicoloured shapes covered with lush vegetation—they are among the most bizarre buildings I have ever seen. Next to the Vienna hub for contemporary art and design survives and thrives the classical Vienna of Mozart, waltz and opera. The Ringstrasse—a circular ring road built in the 19th century to replace the ancient fortification walls—is a showcase of architectural grandeur: the Parliament, the University, the Votive Church, the Town Hall and the State Opera are only some of the magnificent palaces located here.

Symbol of the imperial past of the city is the Hofburg, headquarters of the Hapsburgs from 1273 to 1918 and, today, the seat of the Austrian president. Over the centuries each ruler added new sections and adjusted the original structure according to the needs and taste of the age, creating a vast and heterogeneous complex. Among others, the Hofburg comprises the imperial apartments, the royal chapel, the National Library, a series of museums, the Burgtheater and the Spanish Riding School, where the renowned snowy white Lipizzaner horses flaunt their graceful moves.

With no exaggeration, you would need a couple of days to visit all the attractions of the Hofburg. We limited ourselves to the Natural History Museum—one of the oldest and biggest of its kind in the world—and to the Prunksaal (State Hall), the heart of the National Library, whose precious collection (more than 200,000 volumes) is displayed among sumptuous frescos, marble statues and artifacts. 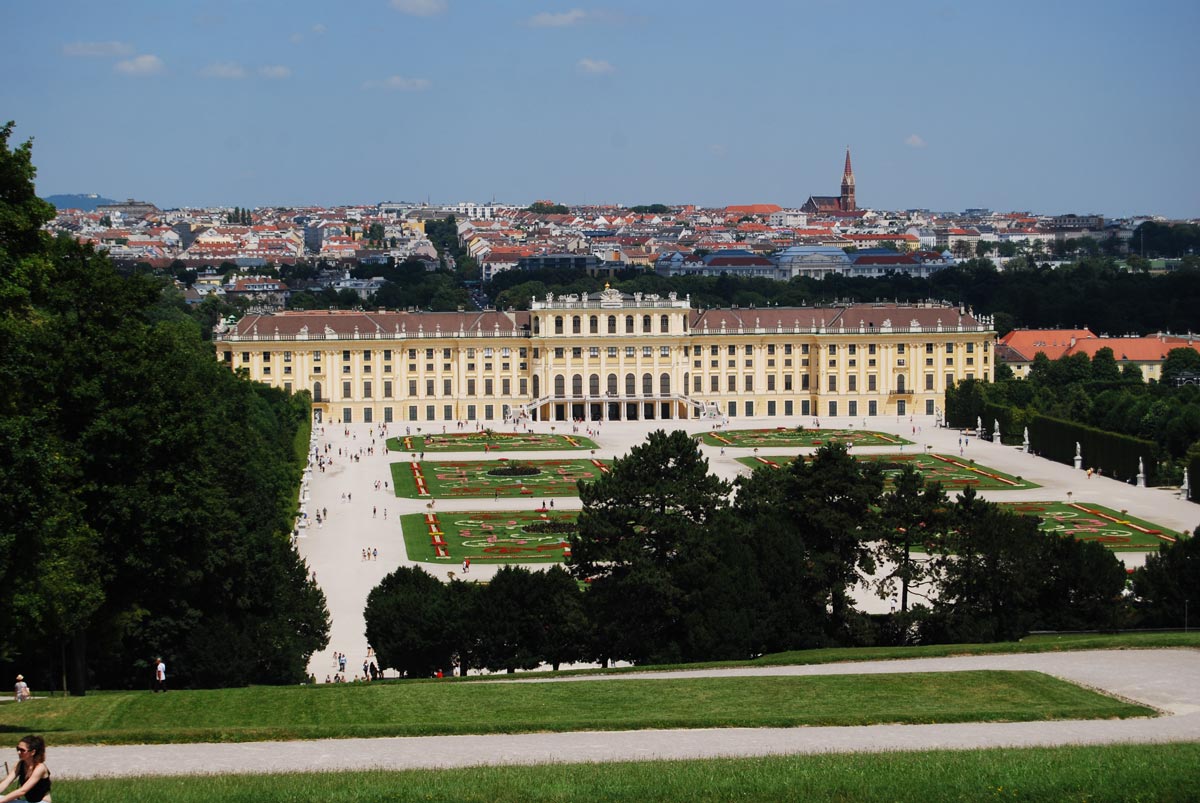 We found the same grandeur on an even larger scale at the Schönbrunn Palace, the former summer residence of the Hapsburgs. The interior is a triumph of frescoed ceilings, paintings, crystal chandeliers, mirrors, stucco decorations and invaluable chinaware and furniture. It took us two full hours to complete the audio-guided tour of 40 rooms: ballrooms, living rooms, tea rooms, studios and the private rooms of Maria Theresa, Franz Joseph and his wife Sisi. (I can’t figure out how long it would take to see all 1441 rooms of the palace.) After the interior, we walked around the enormous surrounding park, which comprises a labyrinth, fountains, Roman ruins, a palm tree glasshouse, the orangerie (an indoor citrus tree garden) and the Gloriette, a terrace erected on the top of a little hill purposefully for the royal family to enjoy the superb panorama over the city.

Another must-see is the Belvedere. The concept is the same of the Schönbrunn: two magnificent baroque palaces, built as summer residence of Prince Eugene of Savoy, with a fantastic view, surrounded by a splendid park. Unlike the Schönbrunn, the rooms of the Belvedere house two art museums. Due to an overdose of culture, we visited only the exhibition at the Upper Belvedere, featuring works of major Austrian painters such as Schiele, Kokoschka and Klimt, whose famous “Kiss” draws the attention of most visitors.

We spent our last night at the Prater, a vast public park known especially for the Wurstelprater, the oldest amusement park in the world. Among the hundreds of attractions, a special place is held by the Riesenrad, a Ferris wheel operating since 1897, which can be considered a true Viennese institution.

Our three days in the Austrian capital passed very quickly. We would have needed more time to fully appreciate all it has to offer. From a cultural and artistic perspective, it is one of the most well-stocked cities I have been to. However, in my humble opinion, its most fascinating trait is its being a balanced blend of classical and modern, anchored to its history and traditions, but projected into the future and open to experimentation.