Story and Photos by Annika Paradise

Although women account for about half of all recording artists in the world, we are vastly outnumbered when it comes to record buyers. At least, this is the impression I got staring at an ocean of men dressed in dark colours, jeans and hoodies at the Mega Record Show, the world’s largest record fair, in Utrecht, Netherlands, in November 2016. In my nonscientific survey of the 41,000-square-foot fair, women seemed to represent maybe 10 percent of this ocean.

These overwhelmingly obsessive dudes, sometimes without any other outlet for their love, would turn out to be some of the most passionate men I’d ever meet.

Take, for example, a Frenchman, Miseur Lenoir, with his pearl-buttoned cowboy shirt and turquoise bolo tie. We chatted over his impressive Johnny Cash collection, which he admitted doesn’t sell well. But sales don’t seem to be the top priority: he’s here for the music. Lenoir lives with his collection in a camper van and travels between European vinyl fairs with no store whatsoever, physical or online. The Mega Record Show is his biggest and most exciting event of the year.

Others came from even further afield. Vendors came from all corners of Europe—Scotland, Spain, Greece, Germany—and as far as Japan, South Africa, Mexico and Brazil to sell their vinyl at the twice-yearly market. 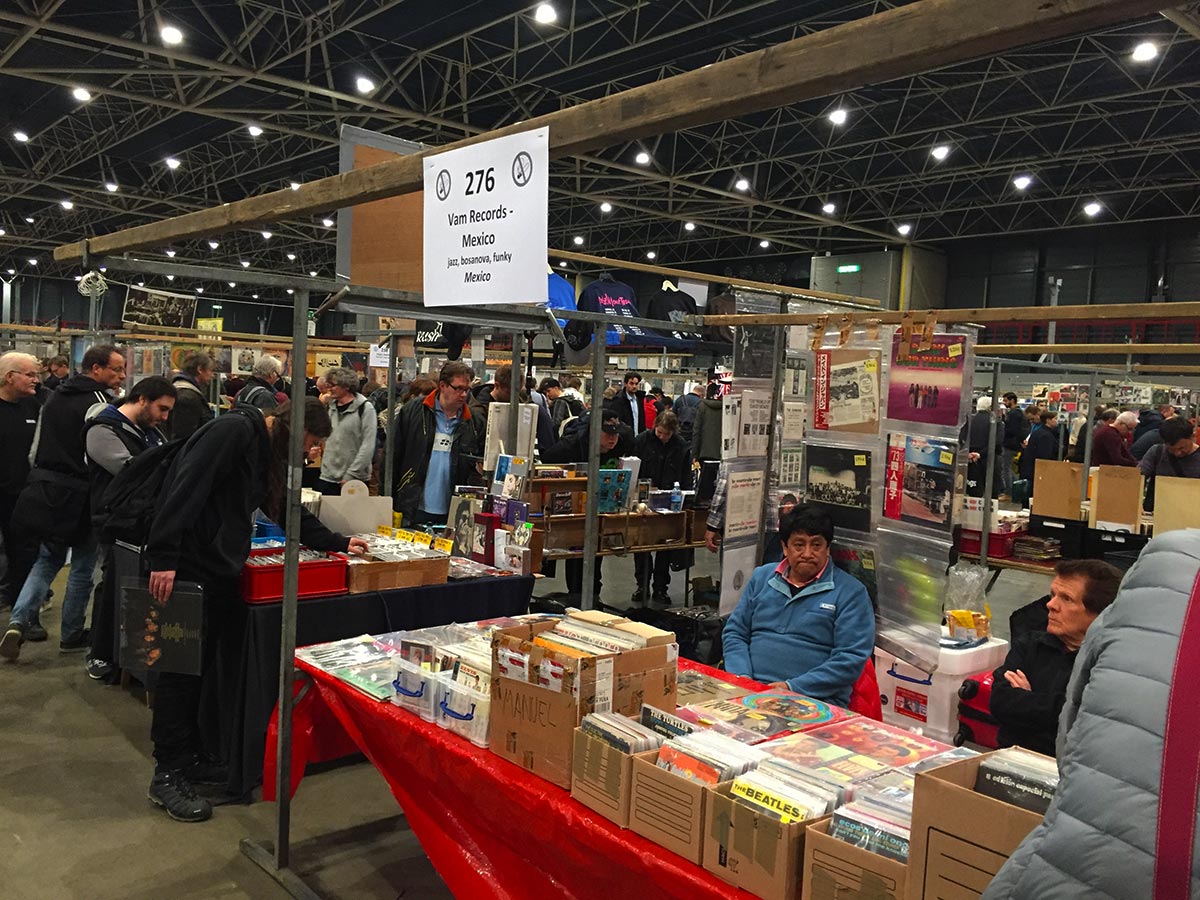 Since its inception in 1992, the fair has only gotten bigger, while the proportion of CDs has dropped. Over the last five years, the fair’s overwhelming popularity forced the organizers to spill over from one entire exhibition hall into half of another, which normally houses a massive flea market. The boundaries are abrupt: just behind the Dutchman who only sells Disney-movie records is a booth with stuffed bats, and diagonally across from him sits a Thai woman selling Coca Cola memorabilia from around the world.

But for this weekend’s 33,000 attendees, it’s all about the vinyl. The vintage medium’s resurgence is officially more than just a passing retro fad. In the second week of December 2016, vinyl sales in the UK surprised everyone by exceeding digital downloads for the first time since downloads existed. And in the US, 2015 vinyl record sales hit their highest level in 30 years, with roughly 40-percent growth year over year since 2012.

My husband, Will, and I were there on a reconnaissance trip to see what the international record scene was all about. We had recently bought a 26-year-old, 900-square-foot record store in Boulder, Colorado called Bart’s Record Shop, and came with extra suitcases to fill with records to bring back to the shop, as well as a few orders from special customers. 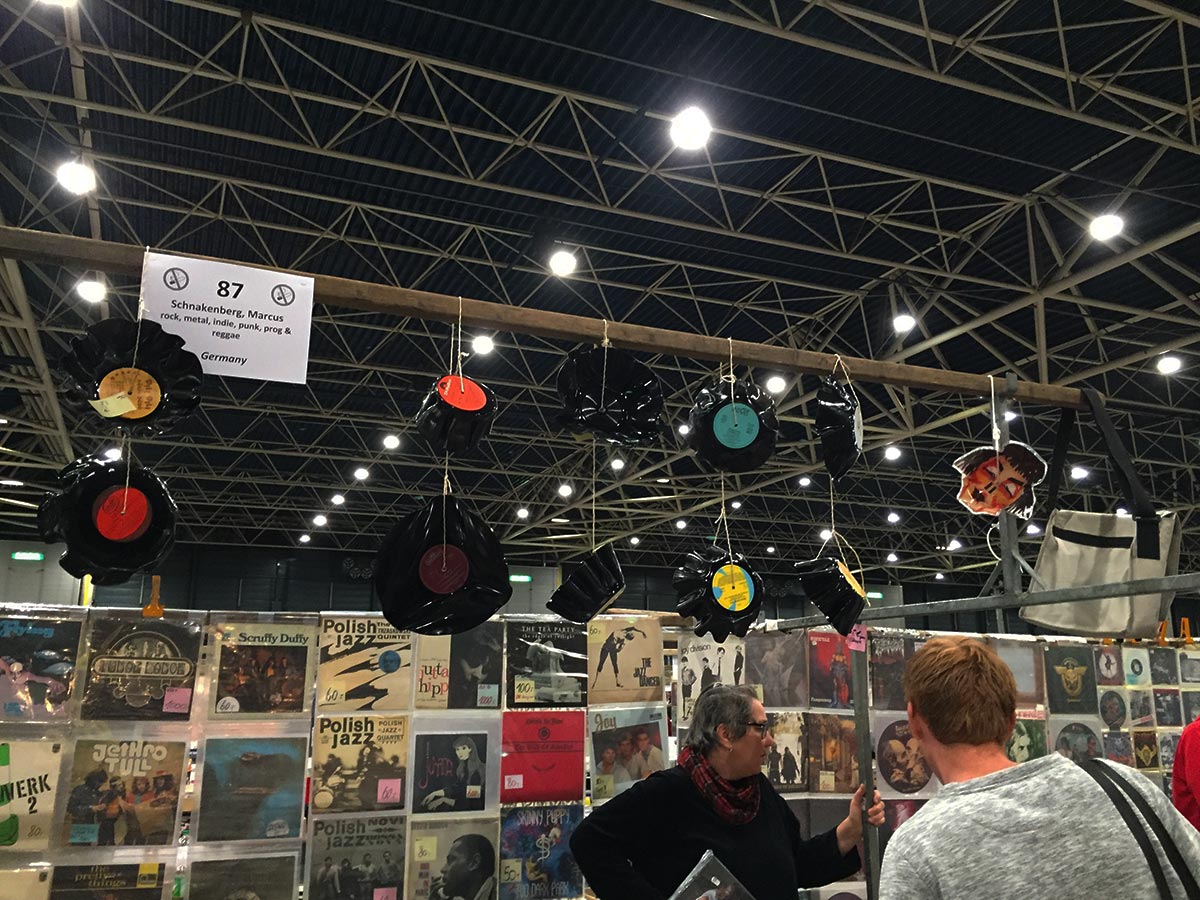 On our first day, however, we realized we may have been a little naïve—prices at the Mega Record Fair were much higher than what we were used to in the US. Most of our store’s $3 used records, like the Doobie Brothers’ The Captain and Me or Blue Oyster Cult’s Agents of Fortune, were selling for between 12 to 15 euros at the market. But as we wandered through the convention center meeting like-minded people from all over the world, listening to a soundtrack that ranged from the Indigo Girls to Prince on the overhead speakers, we realized the “market” part of the market isn’t why these men come at all. It’s the ambiance—the chance to be part of a world-wide exuberance for vinyl and drop some cash for a rare must-have. When I posted a photo of the scene on Facebook for our store’s fans, one commented excitedly: “It’s vinyl porn!”

The longer we were there, the more I started to view the whole scene like an anthropologist, observing the audiophiles trolling the aisles, rolling carry-on suitcases for their purchases. I mingled through the crowd and began to pick apart this male monolith, to find out why they were there and what was driving this resurgence in vinyl sales. It’s known that the warm sound quality is best on vinyl, but there must have been something more. A collection of 1,000 albums is cumbersome and needs its own room, while 1,000 digital albums can fit in your pocket.  So why bother? Why fill warehouses with round vinyl discs? What are all these men after?

Of the many conversations I had, only one Roman gentleman could give a reason I could understand. “It’s something to touch, to put on, the needle, the smell. It’s…”—he gestured in that grand way of Italian men—“…rrrrrromantic.”

And the chase ensued through more than 500 rented booths—four metres long, genres separated into their own mini-villages on the floor, with category dividers I’d never seen before: “Krautrock” “Mellow Shit,” “Swirl.” Along the metal area, or “Death Rock” avenue, I realized I was absolutely the only female in sight; I quickly removed my crimson fleece to tie it around my waist and reveal the black T-shirt I’d thankfully been wearing underneath. 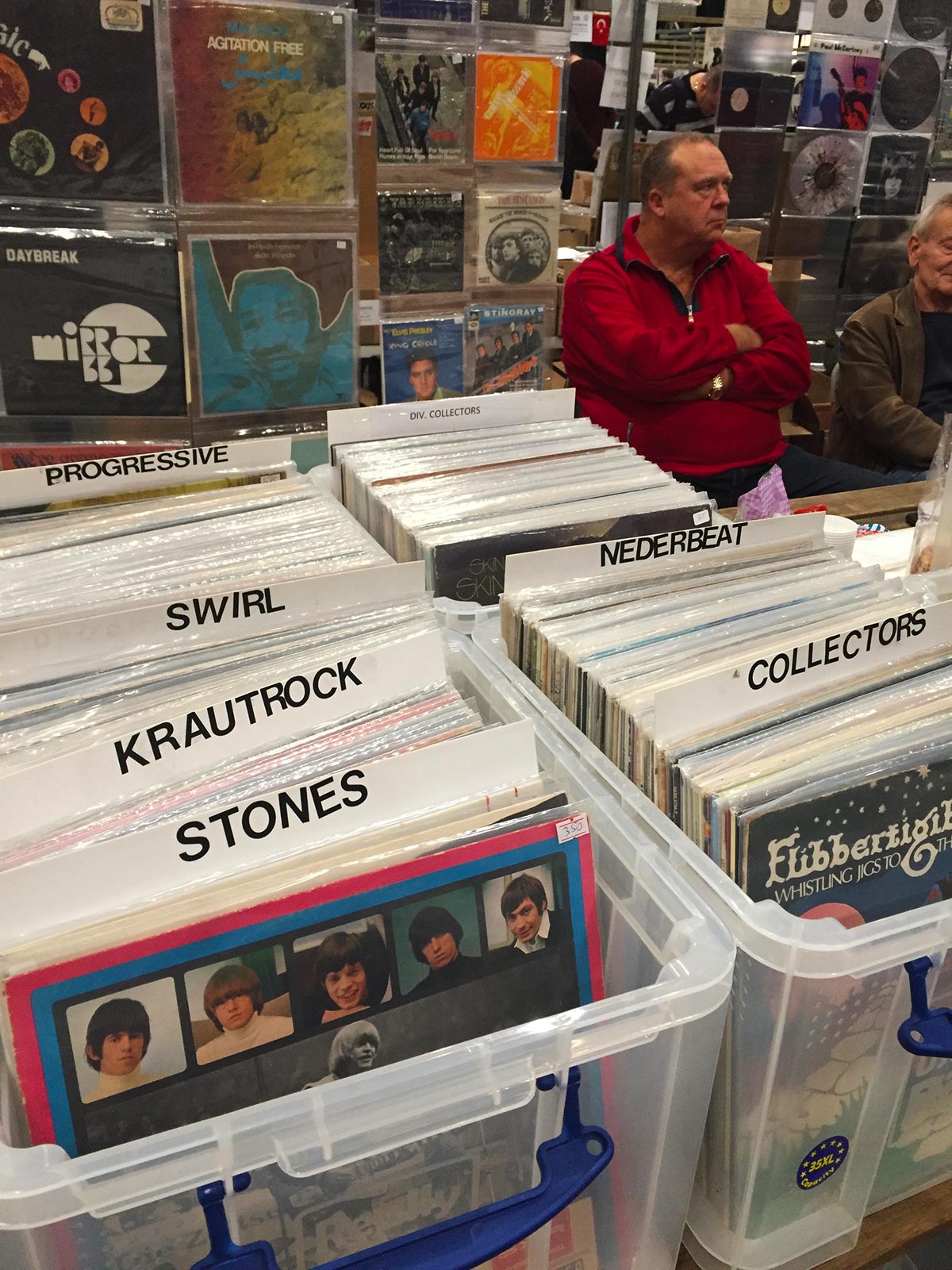 If you know what “Swirl” is, we’re dying to know.

Amid all the metalheads, a booth from Athens caught my eye. A large man with a matching black stocking cap and rings around the eyes, his arms crossed over his chest, certainly (in my mind, at least) a member of the Greek mafia, eyed me with cool surprise. I tried to strike up conversation, but he pointed his thumb to his much younger, more affable, Athenian counterpart.

After some small talk, I directly asked about the Greek vinyl scene: “Is it growing, too?”

“Of course!” he answered, like he was stating the obvious.

“Why is vinyl gaining on CDs?”

“Metal is the best on vinyl,” he answered. “Supreme! Everything else can be from shit CD, but in Greece, metal needs vinyl.”

His large corner friend closed his eyes and slowly nodded in agreement. Purists. 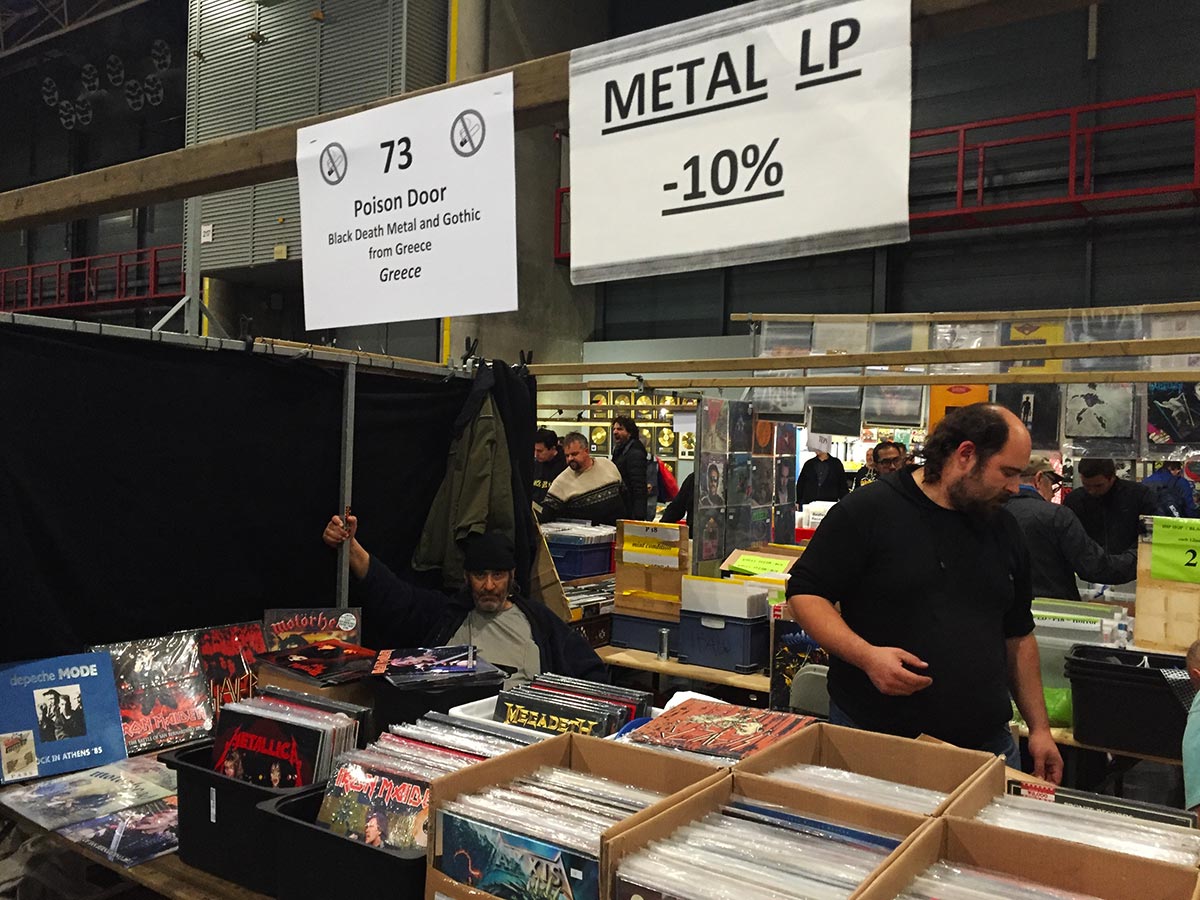 From other vinyl connoisseurs, I learned that it’s not just about the music, but the provenance of the album itself. Most consumer goods are produced in a single location, often somewhere in Asia, and shipped around the world. Vinyl records, on the other hand, have individual pressings noted by location and series number. Some collectors only want original pressings, others want the best sound quality that comes with the newer pressings on 180-gram vinyl, or the slower recording process from Mobile Fidelity. Some want only Japanese or German pressings, which are often regarded as the best. There is one famous American collector named Rutherford Chang who owns 693 first pressings of the Beatles’ White Album, among his 1,652 total copies. People collect for different reasons, and everyone here was seeking their own unique treasure—their musical soul mate.

A young DJ from Strasbourg who looks no more than 16 came with 100 euros—enough to buy 20 records. He said it was worth it to come every six months—at the fair, he can buy a record for five or 10 euros, but in the shops at home, they cost 20-25 each. This was his second visit, but with excitement he tells me he will come each time it’s held: “Not only can you buy records for cheap, but you can learn about new music to bring to your audience.”

The DJ’s father, who had accompanied him on the trip, said the fair reminded him of his youth—the giddy feeling of owning the music, of repurchasing key components of a collection he dumped years before. As they ambled away to peruse the classic-rock aisle, I admired this father-and-son bonding: some might do it over hunting and a beer, but the vinyl resurgence highlights a common language between generations. 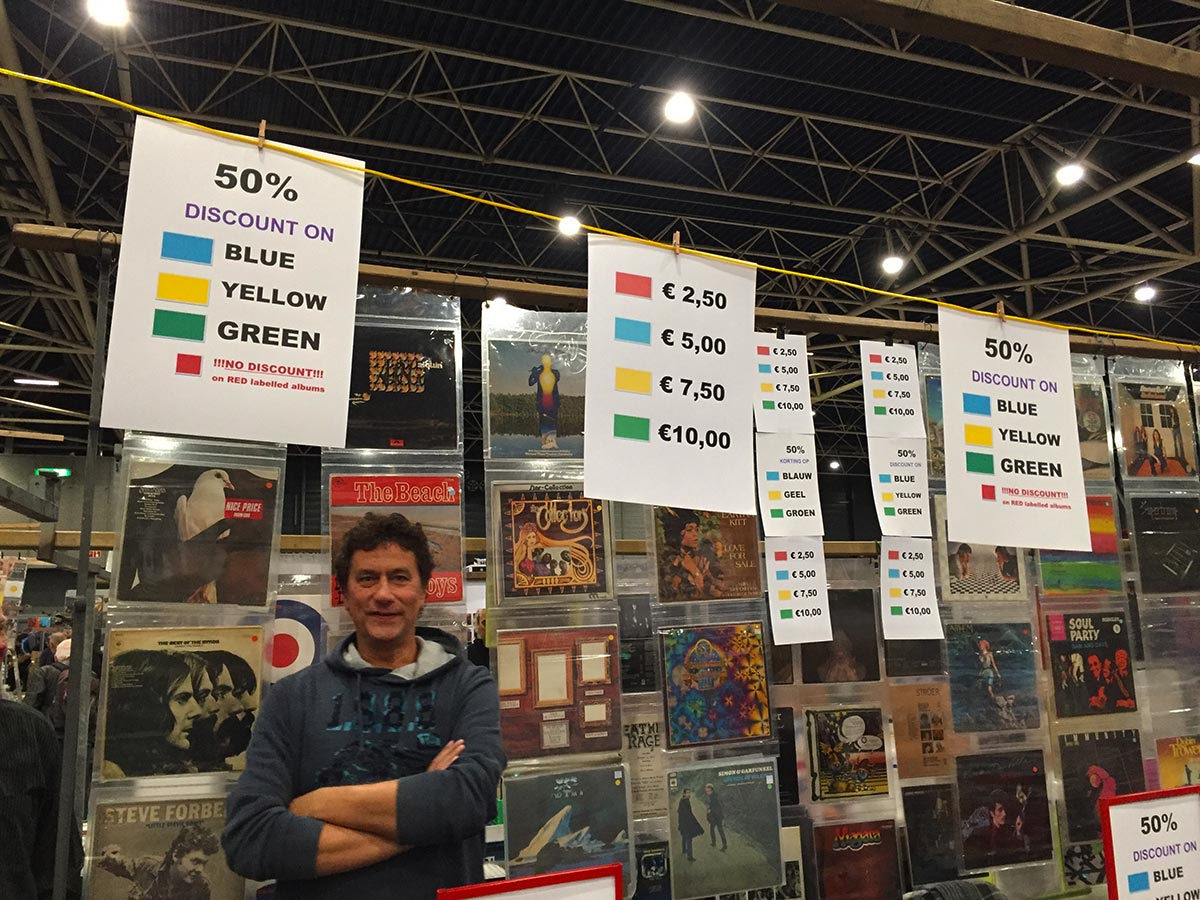 The prices may sound high, but there are deals to be found.

My husband, the real audiophile between us, didn’t cover much ground, but visited just three booths and painstakingly flipped through hundreds of records for two hours. When we finally reconnected at the end of the first day, he excitedly told me about a few rare collectibles that he’d never actually seen in person, including a Japanese pressing of Pink Floyd’s Dark Side of the Moon for 5,000 euros and an unpeeled copy of The Beatles’ Butcher Baby—later renamed to Yesterday and Today, but originally released with a cover image of the boys covered in bloody meat and decapitated baby dolls until the album was recalled and pasted over with a more wholesome album cover—for 120,000 euros. Rare finds like this are abundant at the fair.

At the end of our visit, a thought came to me: next time we need to figure a way to sell rather than buy. The European collectors would drool over the rarest American pressings—Motown pressings of Marvin Gaye, Stevie Wonder, Smokey Robinson and Michael Jackson are rare on the continent, along with anything from small independent labels such as SubPop, Chess or Blue Note—any of these would no doubt sell well. And competition from the US was minimal: the only American representative at the fair was LA’s Rockaway Records, known for their rare collectibles.

As my husband and I fantasized about the “exotic” American vinyl booth we’d set up at the next fair, I suddenly found myself feeling more at home in this masculine, vinyl-obsessed world. Ten years ago, I could never have predicted that I would stroll these aisles with purpose, that the smell of vinyl and the thwapping of flipping through stacks would quicken my heart. Ten years ago, most of us couldn’t have predicted the turning tide of musical mediums. Yet there I stood in Utrecht, proudly wearing my own black T-shirt, tapped into a little-seen world of passionate collectors that’s suddenly growing again, confident that the rules of the past can never predict future.