How I Wandered the Holy Land and Worshipped Every Step

Traveller and OP contributor Dario De Santis travelled to the Holy Land a few years ago, where the big three monotheistic religions can lay claim to some very ancient history. Here’s revisiting one traveller’s take.

Travelling independently requires a good deal of organization: booking tickets, accommodation, planning an itinerary, arranging transport and so on. Although sometimes it’s not so much fun, I believe it’s the best way to start getting acquainted with a destination and to get into the spirit of the trip.

When reading and gathering information, you imagine the places you will see, fantasize about the adventures awaiting you, the people you’ll meet, and so on. In a way, while your body is still in the armchair, your mind is out travelling.

Some trips require more preparation than others; for instance, those in countries with a particular geopolitical situation as in the Holy Land. Independent travel to the Holy Land is very possible, you just need to prepare yourself.

Firstly, know that security at Tel Aviv International Airport is rigorous and lengthy. If you come from or have travelled to certain countries considered “hostile” by Israel, or if customs has any reason to consider you suspicions, you might be in customs for a while. I had to wait for an hour and undergo brief questioning before being granted an entry visa. I assume this was due to the fact that I live in Turkey—a Muslim-majority country—and that I have Jordanian and Lebanese stamps in my passport. [Editor’s note: Dario has moved back to his home country of Italy since he first published this story.] 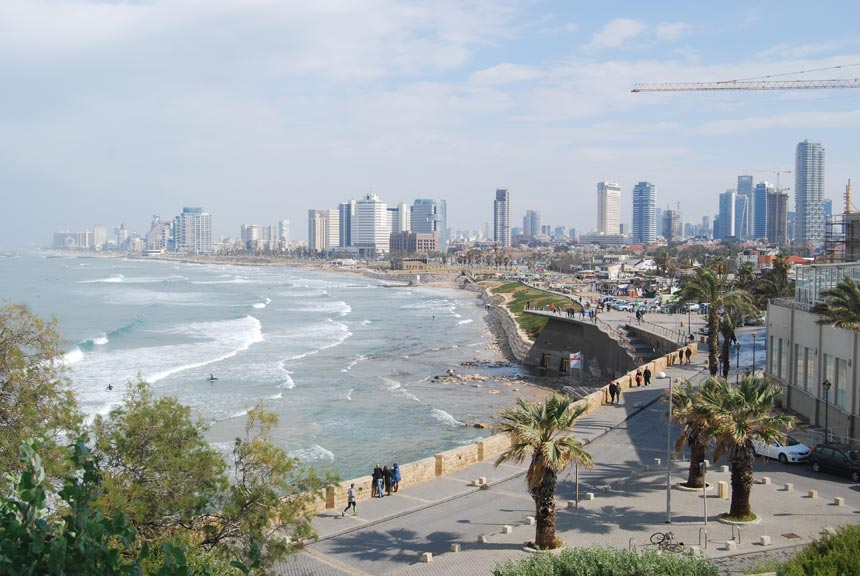 The Tel Aviv skyline, the city sits right on the Mediterrean Coast.

Before you plan a visit to Israel, ensure you can actually enter. If you plan to visit any Arab country after Israel, make sure Israeli customs doesn’t stamp your passport but rather provides you with a separate visa slip. This is now standard procedure and should not be a problem; you should note that you might be denied entry into several countries in the region if you have an Israeli stamp on your passport.

The Holy City of Jerusalem

Ever since I was a child I have wanted to visit Jerusalem, of which I had read and heard so much. Jerusalem is a holy city to the three Abrahamic religions—Judaism, Christianity, and Islam—and because of this it draws millions of pilgrims every year.

But you don’t need to be a believer to be charmed by this place. As soon as you enter the old city, passing through one of its great gates, you are carried to another dimension. The ramparts mark a physical and spiritual border with the outside world.
Wandering in the maze of pebbled alleys, you can hear the echo of history rewinding itself. Along the Via Dolorosa, Angeliki (my girlfriend) and I come across processions of pilgrims coming from all over the world to see the “holy sites.” 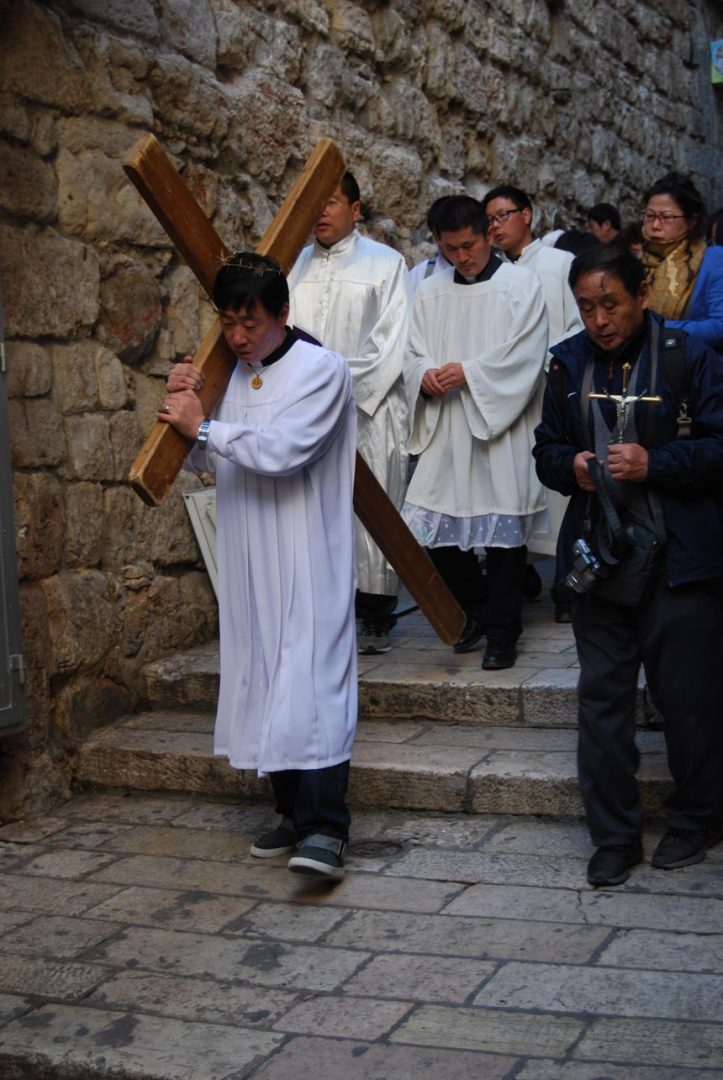 A re-enactment of the Crucifixion of Jesus Christ takes place in Jerusalem when the author was there.

We are enthralled by an enactment underway of Jesus Christ carrying a cross being followed by worshipers wearing tunics and singing hymns. Faith has no borders, of course! A crowd of the faithful throngs the courtyard of the Basilica of the Holy Sepulcher, built, according to Christian tradition, on the spot where Christ was crucified and buried before resurrection. Inside, immersed in dim light and incense fumes, hundreds of people are performing acts of devotion.

To escape the crowd and take a gasp of fresh air, we decide to take a walk on the ramparts and the rooftops. Things look completely different from above. Belfries and minarets tower over a multitude of buildings like giant sequoias in the woods.

The best way to travel around Israel is by car, especially if you are with a group.

From here we can distinguish the four quarters of the Old City—Christian (Latin), Armenian, Jewish and Muslim—and enjoy a magnificent view of the Temple Mount, on which the golden tiles of the Dome of the Rock shine.

Rising on the western side of the Temple Mount is the Wailing Wall, the most sacred place in Judaism, where people gather in the hundreds to pray. Approaching the wall, I observe the faithful in their traditional black-and-white attire, with their heads leaning against the wall, uttering prayers that sound to me like mantras. They seem to be in a trance, striving to connect themselves with God. 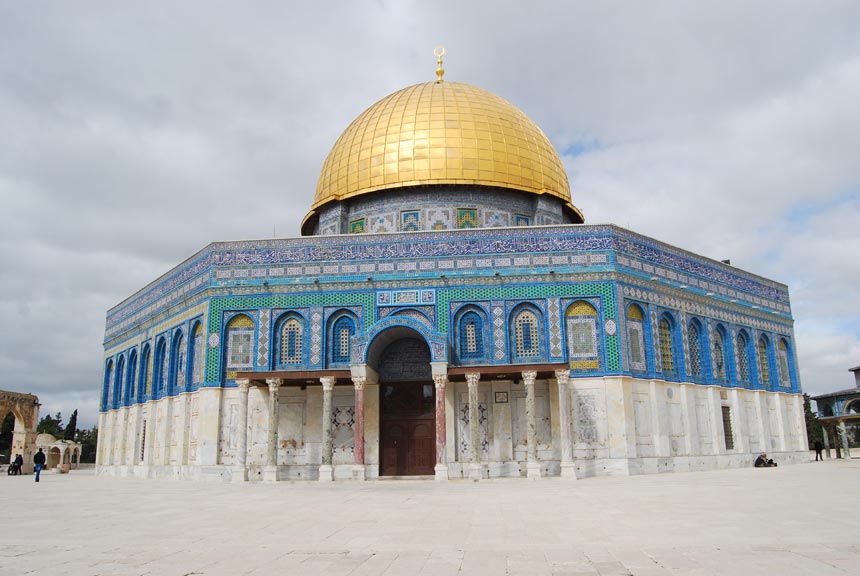 Dome of the Rock on the Temple Mount in the Old City of Jerusalem. 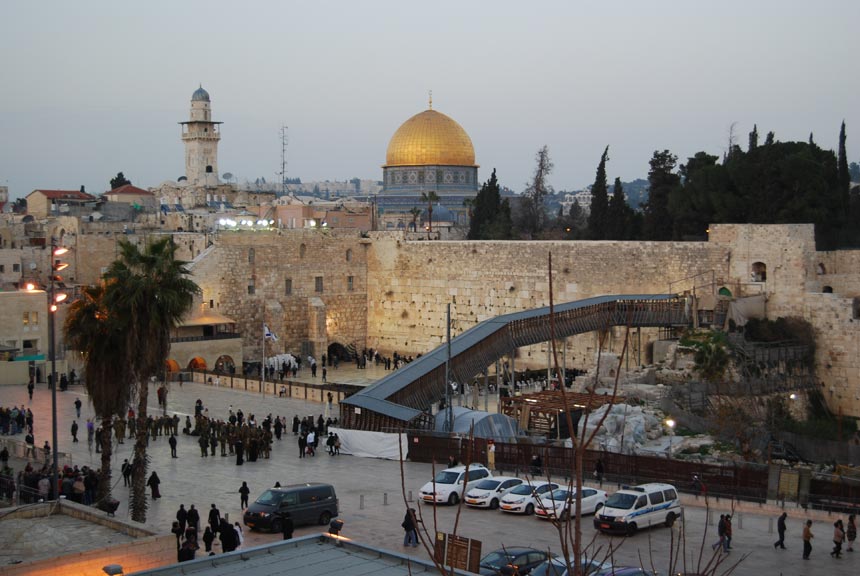 And the stunning long view!

Beneath the Old City lies a whole underworld, which we explore by joining the Western Tunnel tour. In the narrow tunnels, tens of metres below the ground, we can trace millennia of history and civilizations layered in the rock. The Jewish Quarter houses some interesting synagogues and the Cardo, a Roman street incredibly preserved right to this day. Next we meander in the souks (markets) of the Muslim Quarter, lured by the sounds, colours and scents coming from the shops and stands. I think Istanbul, where I live, must have looked a lot like this some 50 years ago.

A week is not enough time to cover all Jerusalem; time plays against us and we really want to see the rest of the country. The best way to travel around Israel is by car, especially if you are with a group.

The solution we opted for was a combination of public transport and taxis to visit the Palestinian Territories. First we took a bus from Jerusalem to Bethlehem (about a 30-minute drive). On the way, we saw the controversial West Bank barrier, a massive concrete wall which carves up the country like an endless snake.

After visiting the famed Basilica of the Nativity—where Christ allegedly was born—we hired a taxi for half a day (to avoid any arguments over price, agree upon one in advance). 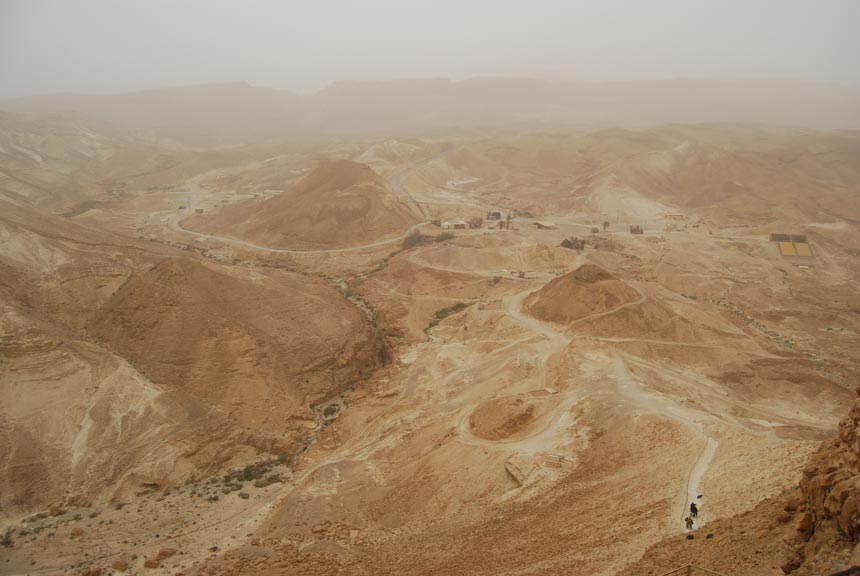 We visited the Herodian—a giant fortress built by King Herod the Great, the Orthodox Mar Saba and St. George’s Monastery, incredibly perched on rocky escarpments in the desert, and Jericho, one of the oldest cities in the world. Visiting these and other places in the Palestinian Territories is absolutely worth it. Getting there and moving around is not dangerous and not hard—it just requires a little organization. (Feel free to ask me questions below, if you want more info on what I mean by that—I know what I’m saying defies conventional wisdom!)

The only inconvenience occurred in the evening, at the end of the trip. Since he couldn’t take us to the centre of Jerusalem, our taxi driver proposed two alternatives: to drop us at the bus stop or at the checkpoint, which is a mere 10-minute walk from the centre. We chose the latter.

Apart from the very emotional experience of crossing a checkpoint, it turned out to be the wrong choice: we had to climb the Mount of Olives, walk through a rundown neighborhood in the dark—not for 10 but for 45 minutes—before we found a minibus going to the centre. Lesson learned: when you are unsure, take the safest and easiest option.

A short road trip across the country

We spent the remaining three days of our holiday on a memorable road trip through the country. We drove through the surreal landscape of the Dead Sea; climbed the dreamlike fortress of Masada, a huge cliff in an ocean of desert; got caught in the rain on a hike in the verdant oasis of Ein Gedi amidst waterfalls, streams, hawks and ibex; drove along the Jordan Valley and the Sea of Galilee; roamed around the glorious ruins of Beit She’an; visited Nazareth, known as the “Arab capital of Israel,” the Crusaders’ Citadel of Acre, the splendid hanging Baha’i gardens in Haifa and the evocative ruins of Caesarea, suspended between the sand dunes and waves of the sea. 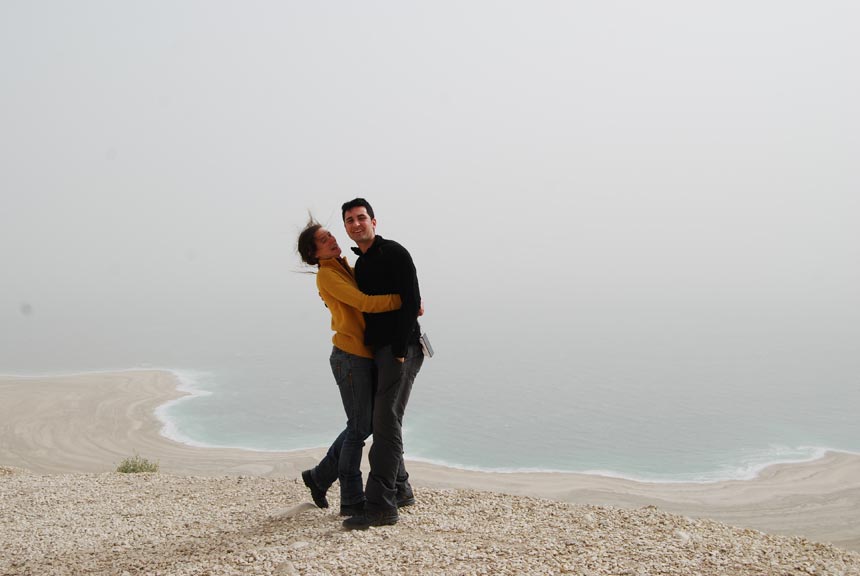 The author and Angeliki at the Sea of Galilee. 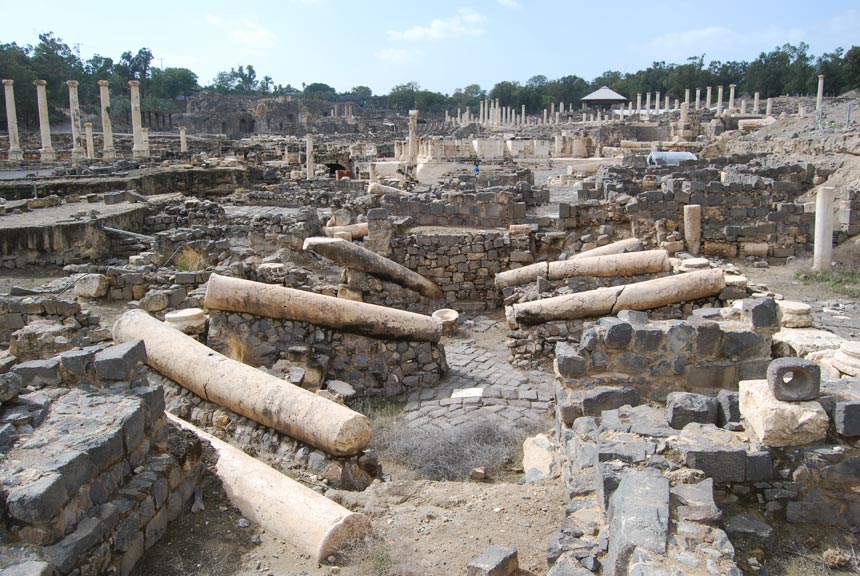 Stunning Roman ruins tell of the longevity of this land, its incredible timelessness.

Ending our journey in Tel Aviv, a very modern city which retains in Jaffa its ancient core, we feel like we have closed a circle. It’s incredible how such a small area of our planet holds such a rich and varied natural and cultural heritage. I am even more amazed when I think of the important role this region has played, and still plays, in the story of mankind.

There must be something special about this land, which is simultaneously the cause of its greatness and its misery. This was a very formative trip for me; it put before me a reality very far from my everyday life. It made me reflect on important themes, such as peace and war, the co-existence of different cultures and religions, the relation between faith and intellect. In other words, it affected the way I see the world and myself. Isn’t this the meaning of travelling? ♦

Yes, Travelling to Europe is Actually Affordable! Here’s How