Would you sink or swim? Here’s how to survive an unexpected plunge, even when the water isn’t cold.

Summer’s coming, and most of us will be taking the plunge—into lakes, streams and oceans. Here’s something you need to know about drowning: people who fall into water unexpectedly are at a significantly higher risk of dying than those in the water by choice—even if swimming in the same location.

Caught off guard, people start flailing and gasping and hyperventilating, all the while using up precious time and energy. “Getting a grip—the faster, the better—can save your life,” says Dale Miller, executive director of the B.C. branch of the Lifesaving Society. “I’ve gone through the coroner’s reports for drownings in B.C. for 2006, and just about everyone [who drowned] didn’t expect to be in the water.” It was either a slip, trip or fall situation, he says, or a boat that capsized that led to the fatality. Tragically, most drownings occur when a victim is close to safety, often within three to 15 metres of a shoreline or poolside, or when they are in the company of others. Panicking and being unprepared—which fuels panic exponentially—are catastrophic to an unanticipated encounter with water.

Staying calm likely kept Julie and Colin Angus alive during their 10,000-kilometre row across the Atlantic Ocean in the fall of 2005.

“It’s so important to assess risks properly,” says Julie. “Somebody looking at our journey might think it’s dangerous. But we took a lot of precautions to minimize risks in every area.” Determined to circumnavigate the globe using only human power, the pair set out from Portugal, timing the crossing to miss hurricane season—to no avail. A call home by satellite phone revealed that they were smack in the path of Hurricane Vince. With no motor to power a quick exit, the only course of action was to batten down the hatches and mentally buck up. “Everything was strapped down. We readied our safety bag, called friends and the National Hurricane Center in Florida for updates, and tracked the hurricane on charts relative to our position.” It was a terrifying three days in a tiny cabin, which they padded to prevent injuries, but they survived, with the boat and supplies intact. It also proved good practice—they weathered three more storms before landing in Costa Rica.

At best estimate, according to the International Life Saving Federation, accidental drowning is the third major cause of unintentional deaths worldwide (after road accidents and falls), with more than 400,000 victims every year—and that doesn’t include people who die in floods or overloaded ferries (travellers, beware!).

Canada has one of the worst ratios of male-to-female drownings: of the 410 who died in 2004, 344 were men. And, according to the United States Lifesaving Association, more than 80 percent of rescues at surf beaches in the United States are from people caught in rip currents, which can form in any water with waves, including the Great Lakes.

Hypothermia is a death risk, but, in fact, it’s the initial gasp reflex that leads to many tragedies, particularly those within minutes of submersion. Why? According to Transport Canada’s Survival in Cold Water guide, you’re at a four-fold risk of severe hyperventilation in cooler waters, along with a massive increase in heart rate and blood pressure. (It’s called “cold water shock.”) 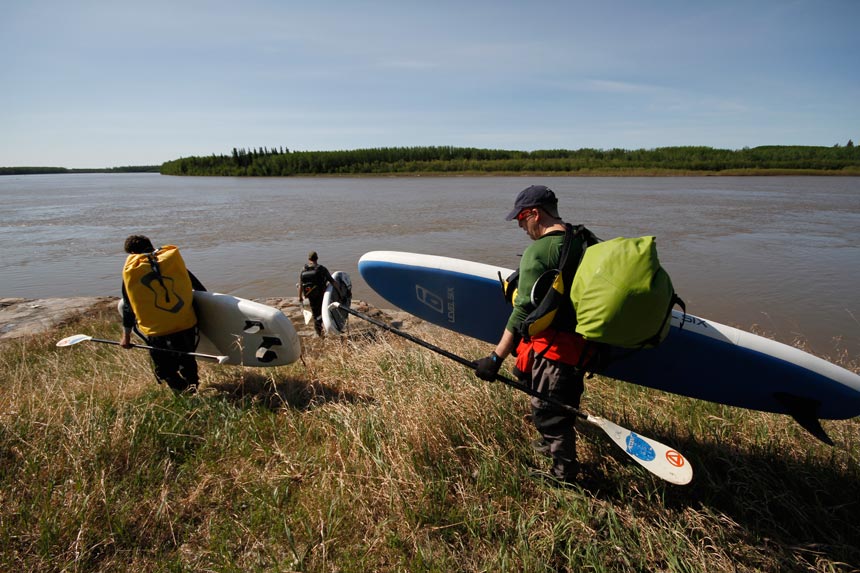 Death is possible here, so being able to slow breathing and heart rate, and hold your breath when submerged or hit by waves, is critical. You only have 10 minutes in cooler waters before muscles start loosing agility—meaning tasks like swimming or lifting yourself to safety are difficult, if not impossible. What to do? Calm down, tread water, and look for any object to hoist yourself onto, even partially. Getting even a portion of your body out of the water increases your chances of survival. If there are no objects nearby, assume the Heat Escape Lessening Position (HELP) to lessen body heat loss (see next page).

If more people knew the Lifesaving Society’s Swim to Survive program, Miller says, drownings in Canada could be cut in half. Defined as the minimum skills needed to survive an unexpected fall into water, it involves three key steps: roll into water (instead of flailing); tread water for one minute to orient yourself; check your surroundings, then decide the next best option. Should you wait for a rescue (are people near?) or swim to shore?

Everyone should be able to swim (or dog paddle!) at least 50 metres, says Miller, adding that practising drills in a safe setting is a good idea. In recent years, several foreign exchange students in British Columbia have drowned in lakes considered safe by locals. The reason—that they ventured too confidently into unfamiliar waters—might well serve as a warning for all travellers.

Outpost: Just from a physical standpoint, how do you think rowing across the ocean was even possible, especially as you and Colin are petite?

Julie Angus: Everyone says that! Being physically capable is important. But more of it is stamina, having the mental perseverance, the discipline, to just keep rowing. A lot of mental things wear you down—the isolation, duration of the journey. And it’s tough on your body because you’re rowing 10 hours a day for five months. You have to be careful you don’t injure yourself.

OP: Did you do any physical preparations for the trip?

JA: I trained with the Vancouver Rowing Club, working with a coach on technique and endurance. I would row on the water and on the stationary rowing machine, getting my workouts up to two hours, because we always rowed in two-hour shifts.

OP: Were you worried about volumes of water coming into the boat?

JA: Waves did break onto the deck—in some cases five storeys high…but the boat was designed to drain that water away. The big fear was capsizing and we came close a few times—the boat tipped onto its side and just hovered there—but, fortunately, it righted on all occasions. We had a ballast at the bottom of the boat and we had buoyancy on top. So it was designed to self-right.

OP: Did you do any simulation exercises to prepare for the worst?

JA: We did a lot of drills beforehand. For us, there are key things anybody should do to prepare for a marine journey: [determine] the seaworthiness of the boat; know what to do in case of an emergency; be able to maintain warmth, sustenance; navigate—knowing where the challenging sections [in the ocean] are, where we could encounter danger, navigating when we couldn’t see any landmarks; communicate— being able to communicate our position throughout the entire journey, to alert others to our position on the ocean. When we found out a hurricane was coming, we talked about how we would deploy the life raft. We had a safety grab bag with essential emergency equipment, a way to signal our location, signalling mirrors, flares, clothes, food, emergency response beacon, satellite phone and spare battery, hand-held desalinator [for water]. We talked about what we would do if the boat was holed—would we abandon it?—and all those scenarios, so if the moment does arrive, you deal with it as efficiently as possible.

Water Things to Bring, Do, Know:

If Effecting a rescue, follow these eight tips, listed from best to least favourable, from the lifesaving society’s ladder of risk:

Note: This information is a guideline only. Always get individualized advice from a qualified source before travelling. For more info on water safety, see the Lifesaving Society (of Canada), and Transport Canada’s Survival in Cold Water guide.

Never Take Your Brain for Granted