Our super-senior correspondent never felt the pull of Vegas. But an invitation to a friend’s destination wedding showed him that the desert-city playground is almost what it’s cracked up to be.

If it wasn’t for bad luck, I’d have no luck at all. So the call of the croupier has never beckoned loud enough to draw me into mirror-ceilinged gambling dens looking to make my fortune. If honest, I could even go so far as to suggest that real casinos intimidate me.

I’d no sooner don an evening suit and sashay up to one of the green baize tables and suavely ask—in my finest Bond James Bond voice—to be dealt in, than I would hop the boards at an NHL game and try my hand at some penalty killing. So unskilled am I in the art of the flutter that the last time I faced a slot machine, I panicked and ran away with a blushing countenance.

This was shortly after attempting to pull the arm, only to discover that it was fixed, hollow and purely decorative, and that today’s machines are all digitized and computerized and, well, complicated for someone like me. But I do still enjoy wandering about the odd high-end casino when travelling, as much to people watch as anything else.

I’ve had voyeuristic pleasure in the gaming rooms of Vienna and Nassau, London and Melbourne, but I never felt the pull of the granddaddy of gambling, Las Vegas. So when close friends announced they were getting married in Sin City—though sadly a proper wedding at a nearby country club, not a quickie at the Britney Spears Chapel of Short-term Love—I must confess I wasn’t overly enthused.

It has long been my mantra that I’ll go almost anywhere once, but some destinations, like Vegas, I am saving for my polyester years. But Mike and Meghan are great friends, and reasoning that anywhere can be an adventure, I headed to Nevada. 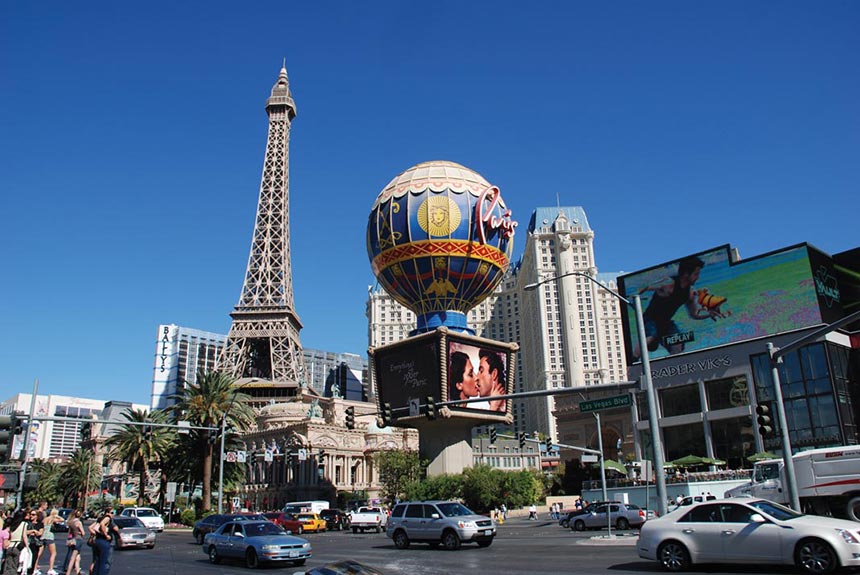 What happens in Vegas goes in Outpost!

History, Hollywood and literature have lent high-stakes gambling such a sense of style and elegance that putting your entire worldly wealth on a spin of the wheel seems fashionably sensible. Even debonair super spy James Bond was introduced to the world in a casino with creator Ian Fleming’s first novel beginning, “The scent and sweat of a casino are nauseating at three in the morning.”

It was only 11 p.m. when my airport cab pulled up at my first-ever Vegas casino and I wasn’t regaled in a tux, but I did instantly empathize with the author. There was no discernible scent of sweat that I noticed, but I was immediately struck by the fog of cigarette smoke. We quickly dropped our luggage in our room and headed outside to The Strip for some fresh air.

We headed through the casinos and down the wide neon canyon past lions and tigers, pirates and castles, Elvis impersonators and human statues, a giant pyramid, an equally giant Eiffel Tower, high-end restaurants, designer malls and every star imaginable from Jimmy Buffet to Johnny Mathis, Wayne Newton to Elton John, all while Ursa Major twinkled overhead in the crisp desert sky.

But if Vegas is a nirvana for gamblers, partiers and people watchers, it’s also a great centre from which to explore some of America’s most spectacular scenery and to indulge in a little adrenalin-fuelled tomfoolery.

There’s skydiving and aerobatic flights, ATVing and dune buggying in the Mojave Desert, whitewater rafting, dirt biking, hiking and climbing in the surrounding canyons. There are visits to Hoover Dam, Death Valley, Bryce Canyon, Zion National Park, Red Rock Canyon and the Grand Canyon. You can visit a gun range and fire off any firearm imaginable, head out on horseback with real cowboys, explore ghost towns or soar aloft in a hot air balloon. In short, whatever floats your boat is on offer in the middle of the Mojave. 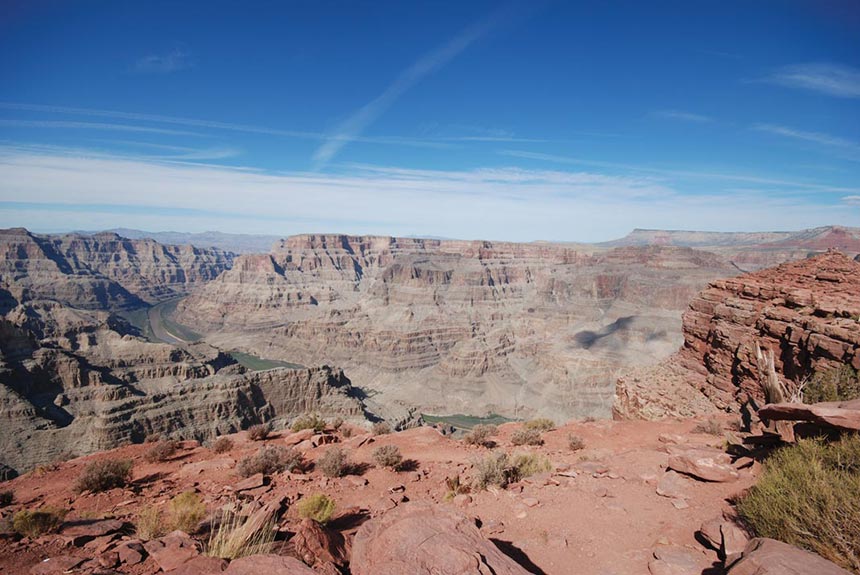 Perched on the edge of the magnificent Grand Canyon, Arizona

From someone who wasn’t too fussed about visiting Vegas, within hours of stepping off the plane I had become a confirmed Vegas junky. Strolling the casinos by night was proving as entertaining as a good game drive on the Serengeti, while by day I had canyons and deserts to explore by every conveyance known to humanity—and still have time for Donny and Marie in the evening.

I’ve been a propeller head for as long as I can remember, and never miss an opportunity to fly—anywhere, anytime, in anything.

Having returned from exploring the West Rim of the Grand Canyon and with time to spare before the wedding, I surveyed the menu of active goodies available, before opting for a glider flight riding the thermals above the desert.

The airfield was located well beyond the city limits near the California state line and was surrounded by the stark scenery of the desert, red mountains and a flawless blue sky. These were the same skies that had long been host to strange lights and mysterious craft, not far from the top secret Area 51 with its stealth aircraft, spy planes and alien autopsies, the subjects of which I think I may have seen in one or more casinos.

Our glider sat beside the runway. It was bright yellow and was that most rare of engineless aircraft, the three seater. The pilot, in his A-2 brown leather jacket and mirrored sunglasses, jumped on his motorbike and headed off down the flight line to the tow plane, while I joined the glider pilot in gently wheeling my aircraft into position. The tow plane—an awkward carbuncle of a single-seat, propeller-driven crop duster—taxied into position. The towline was attached, we clambered in, buckled up, pulled down the scratched Perspex canopy and had our safety briefing. 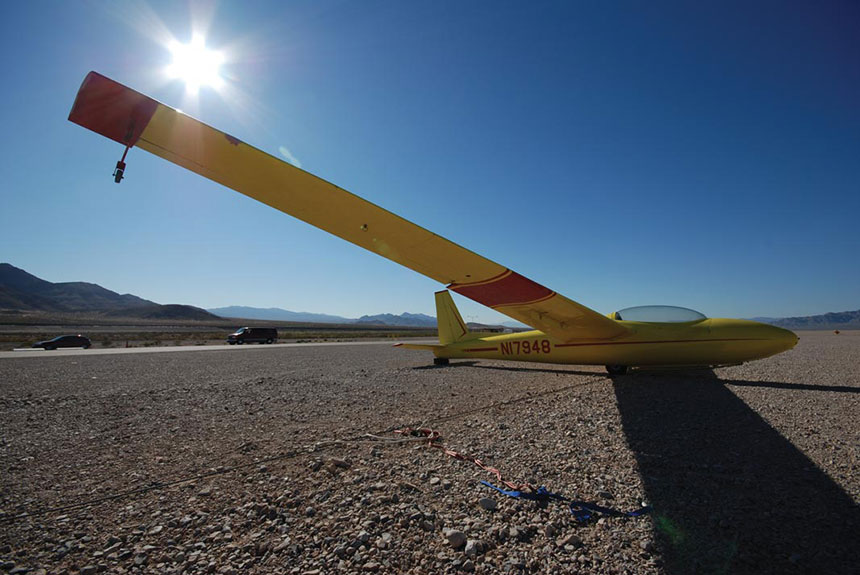 “How many miles per gallon exactly?” Wheeling out our yellow three seater at Jean Airport, Nevada

“See those cables on the floor?” our pilot began. “Make sure you don’t put your feet on them as they control the flaps. Keep your seatbelts tight. And, if you think you’re gonna throw up, use the bag.”

The tow pilot revved up the crop duster, the line pulled taut, and we began bouncing down the runway.

Ahead of us the tow plane took to the air, and we followed the cable up into the clear, early morning skies, the glider rocking and swaying like a child’s balloon on the end of a stick.

Around and around we went in ever widening circles, gradually climbing.

“There’ll be a loud noise when the line is released,” our pilot explained. “Don’t be alarmed.”

With that there was a booming metallic crack. I jumped and immediately checked to make sure I wasn’t standing on one of the cables and hadn’t just caused the tail to fall off. Instead, I saw the towline drop away, and with our link severed we were engulfed in sheer and utter silence, and gently wheeled and soared above the desert floor, standing on a long, lean wingtip one moment, arcing towards the sun the next.

Without an engine to fill our ears, we heard every creak and groan of the glider’s seemingly fragile body. 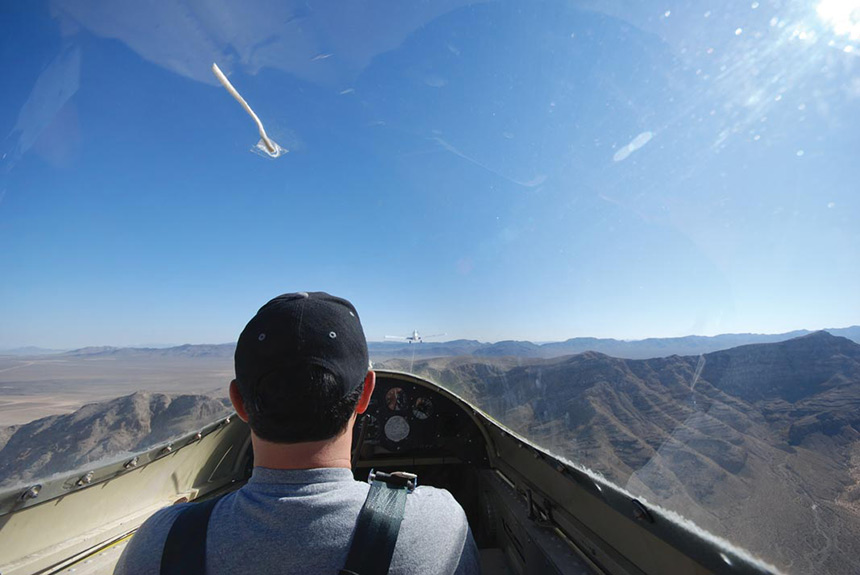 View from the cockpit

“How long will we stay up?” I asked, marvelling at the dry lake beds and mountains stretching off into the hazy distance.

“Just an hour today. The longest I’ve done was six hours. Depends on wind and the thermals. The hot air shoots up from the ground and gives us lift,” he added, just as we were kicked upwards by a sudden surge of warmer air. “Just like that!”

So gradual was our downward spiral that our descent was barely discernible. Distracted by the gentle whoosh of air over the wings, the increasing heat of the sun through the clear canopy and the soothing turns, it was almost like being immersed in a warm, tropical ocean.

With the nearest mountain tops now looming overhead, it was apparent that our flight was sadly coming to an end. The pilot radioed to the tower for permission to land, we swooped low over the road and settled gently onto the runway. There was a clunk as our wheels made contact with the tarmac and a scraping sound as we settled down. Momentum carried us onto the apron, and we came to a soft stop with one wing touching the cracked floor. 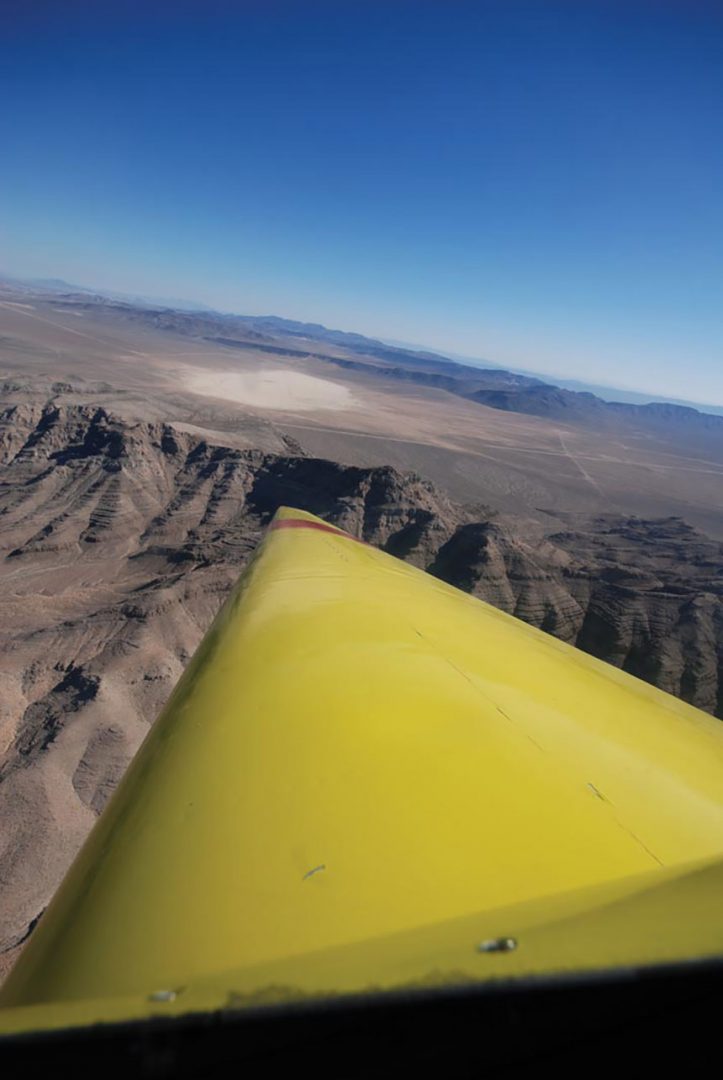 View from the wing tip

We climbed free and headed back to Vegas just in time for the wedding. We entered our hotel, swam through the pall of smoke, crossed the lobby and weaved through the rows of slot machines, heading to the elevator and our room.

“Where’re you comin’ from in a hurry?” asked a man propped on a stool at a flashing, clanging one-armed bandit near the elevator. We told him of our adventure.

“Sounds dangerous,” he said, pumping more money into his machine. “Wouldn’t catch me in one of them. I ain’t no gambler.”

‘Tis the Season for Some Flight Tracking

What Was Your Most Memorable Expat New Year’s Eve?