Welcome to Local Lampang: at Dreamer’s Cafe and Yellowhand Workshop

About 110 kilometres from Chiang Mai in northern Thailand is the unassuming city of Lampang, where a chance meeting with a restaurateur led Team Outpost on a day’s exploration of its local hipster culture.

We saw almost none of that. Instead, we saw a version of Lampang I’d never imagined: a wide-eyed, hippyish vibe pulsing through colourful markets and local restaurants, a spirited city that could not have been more different than the grey pitstop I was initially dreading.

“Whoever owns this place has a story,” our travelling campaign Mike mused as he took in the eccentric retro-styled decor.

Win may say he’s a dreamer, but he’s not the only one. Some may also call him a hipster or a hippy. One thing we can all agree on: Win is a wonderful guy.

The owner of the Dreamer Cafe, a Western-Thai fusion burger shop, Win dresses in ’50s and ’60s clothing, listens to indie artists like Chet Faker and Angus & Julia Stone, and builds motorcycles in his spare time. Win spent his teenage years in New Zealand, where he found a love for good food—burgers in particular. He is adorned with tattoos of things that make you smile: a brain on one foot, a heart on the other; “Respect Yourself” in cursive; a rainbow because, he says, “They always come after the storm.” 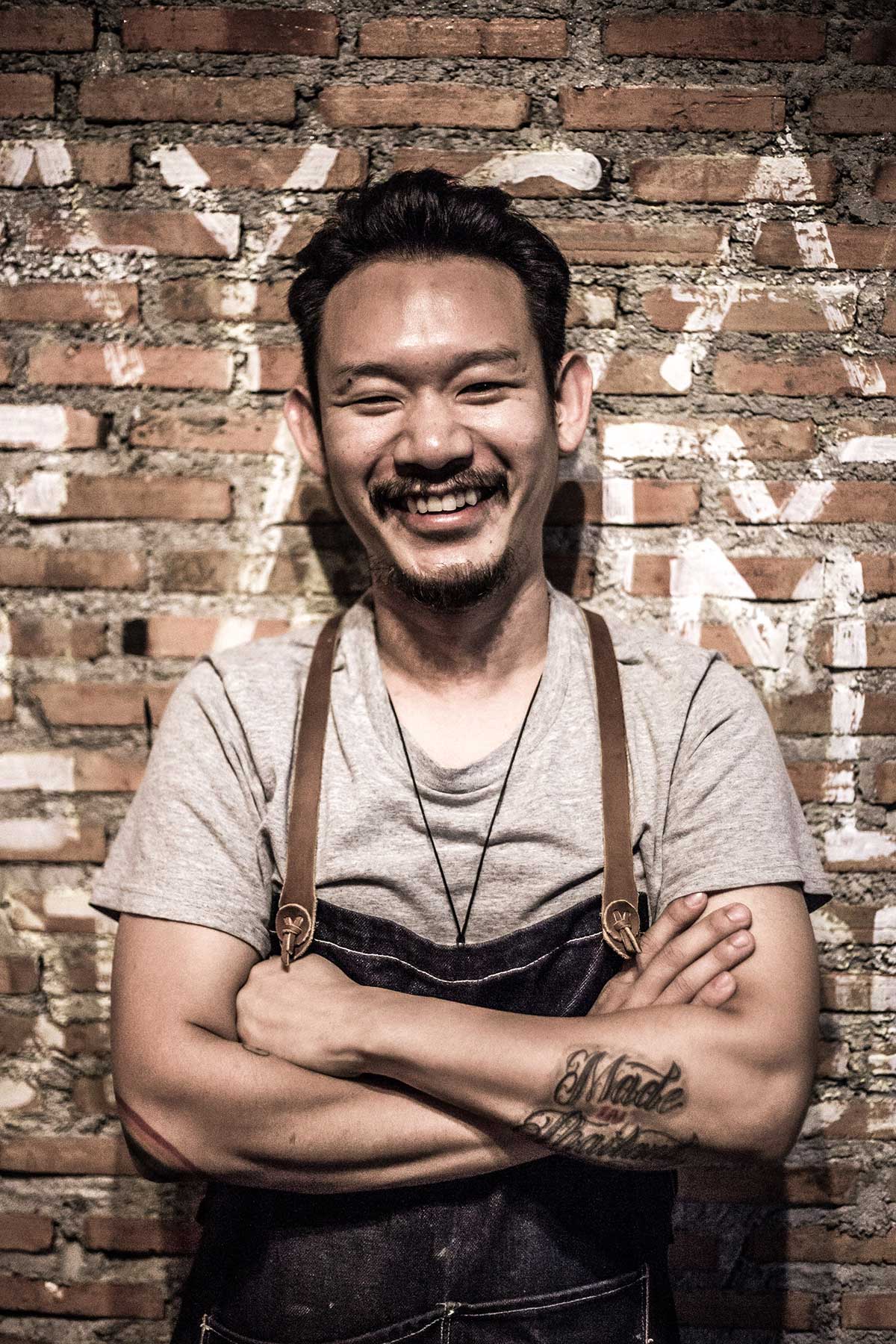 It all started when Lena and Sue stopped for directions at Win’s restaurant, the Dreamer Cafe.

While Win’s body art creates a portrait of a deep-feeling, forward-thinking, optimistic human being, he is also grounded in his roots, with “Made in Thailand” emblazoned on his arm. Indeed, much of his story is incredibly—for lack of a euphemism—Thai. His parents run a ceramic factory—typical of Lampang, which is known for industrial ceramics—that outfits IKEA. He met his wife at her parents’ noodle shop.

Inside the cafe, John Lennon lyrics are spray painted on exposed brick, a motorcycle suspends from the ceiling and black and white stills of Elvis, Bob Dylan, and Nina Simone hang on the walls. The tables are ’80s cafeteria style, and sitting down, I was instantly transported back to Toronto’s Queen Street West. The vibrancy of Dreamer in all its hipster splendour is juxtaposed against the monochrome, creaky streets of Lampang, which, like most industrial towns, felt like it needed a good oiling. 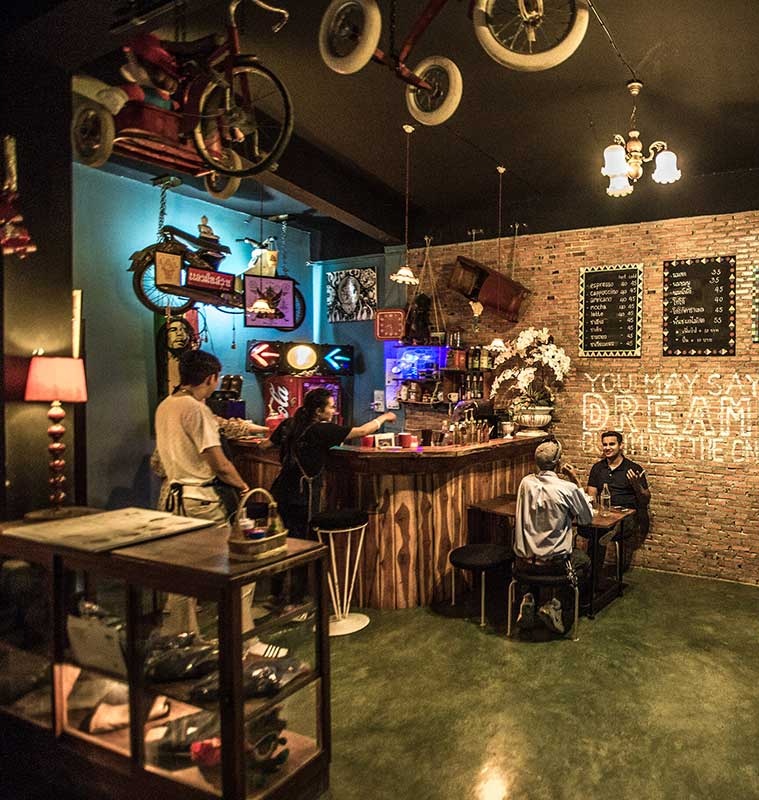 These photos: inside the Dreamer before its renovation, where the cool, casual vibe is all hipster splendour, and damn, was that burger good! 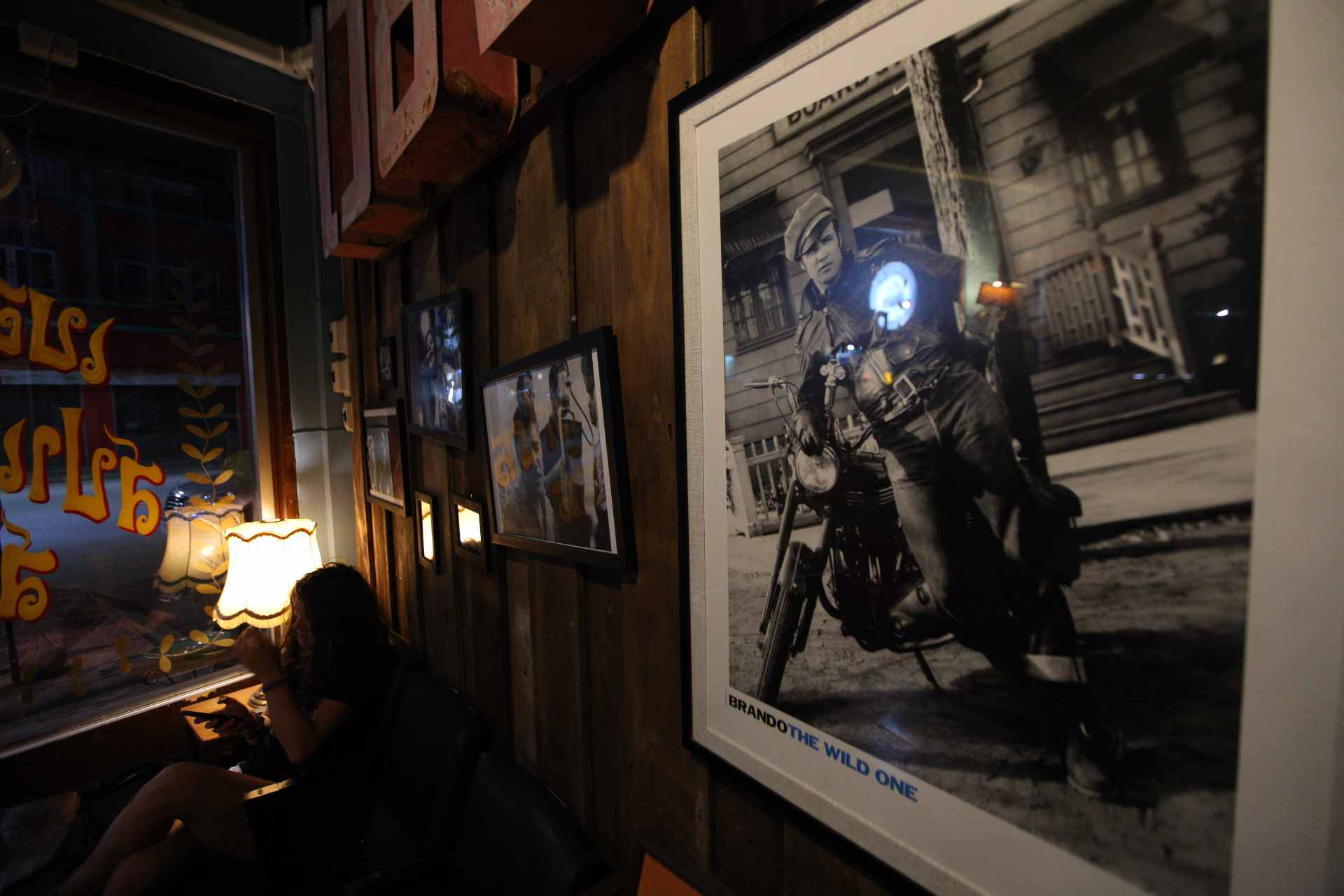 Brando, Elvis, Dylan and Simon adorn the walls at the Dreamer.

Lena sips on a cool beer at the Dreamer, after spending the day getting to know local Lampang.

There’s always guilt when you’ve crossed oceans and opt for a burger. But that burger would end up being a gateway for us into a Thailand we would have never otherwise seen—and damn, was it good.

[Editor’s Note: the Dreamer underwent a renovation since Team Outpost was there—it’s cooler, bigger and better than ever, with a menu that not only includes burgers but pasta, steaks, and the most delicious-looking wood-fired-oven-cooked pizza ever! Actually, it’s now called Dreamer: Burger. Steak. Pasta. Check out what the Dreamer looks like now,  including its menu fare here.]

Win delivered our dinners to us and disclosed that he was the owner. From there, we became fast friends. We told him of our intentions with Lampang: to see the teak wood carvers and a few of the town’s many temples.

“Yeah,” he said. “You could do that. Or I could show you the real Lampang. I want to show you. This is from the bottom of my heart.”

For a moment, my stomach panged with a touch of anxiety. Don’t we want to highlight the accessible offerings of this already off-the-beaten-path place? We had plans—to see the wood carvers, the temples, the horse-drawn carriages. To the wind, they went.

The next morning, we met Win bright and early. He picked us up in a 1960s Volkswagen truck. We piled in the bed, Sue and I riding in the back seat.

Win had brought along his beautiful (at the time, newly-pregnant) wife, Saieiw, who rode shotgun. Together with their double-denim Levis and Ray Bans juxtaposed with Lampang’s rusty, blue-collar feel, I had trouble reconciling my cognitive dissonance—what I thought this place would be versus what it was becoming. 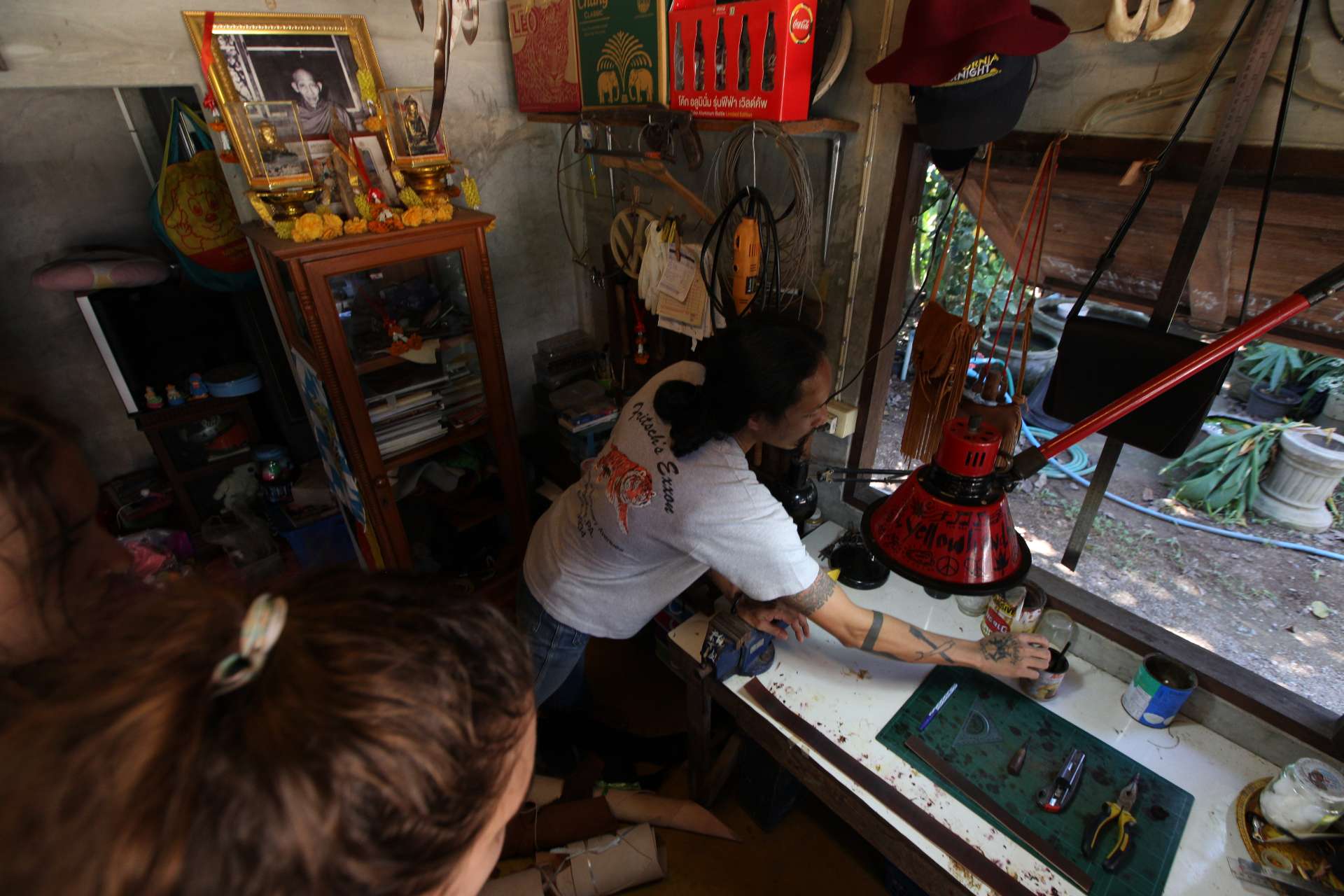 At the Yellowhand crafts workshop with Sung, who typically creates wares from leather, and who, though somewhat shy, happily spent unscheduled time with Lena and Sue, answering their 10,000 questions. 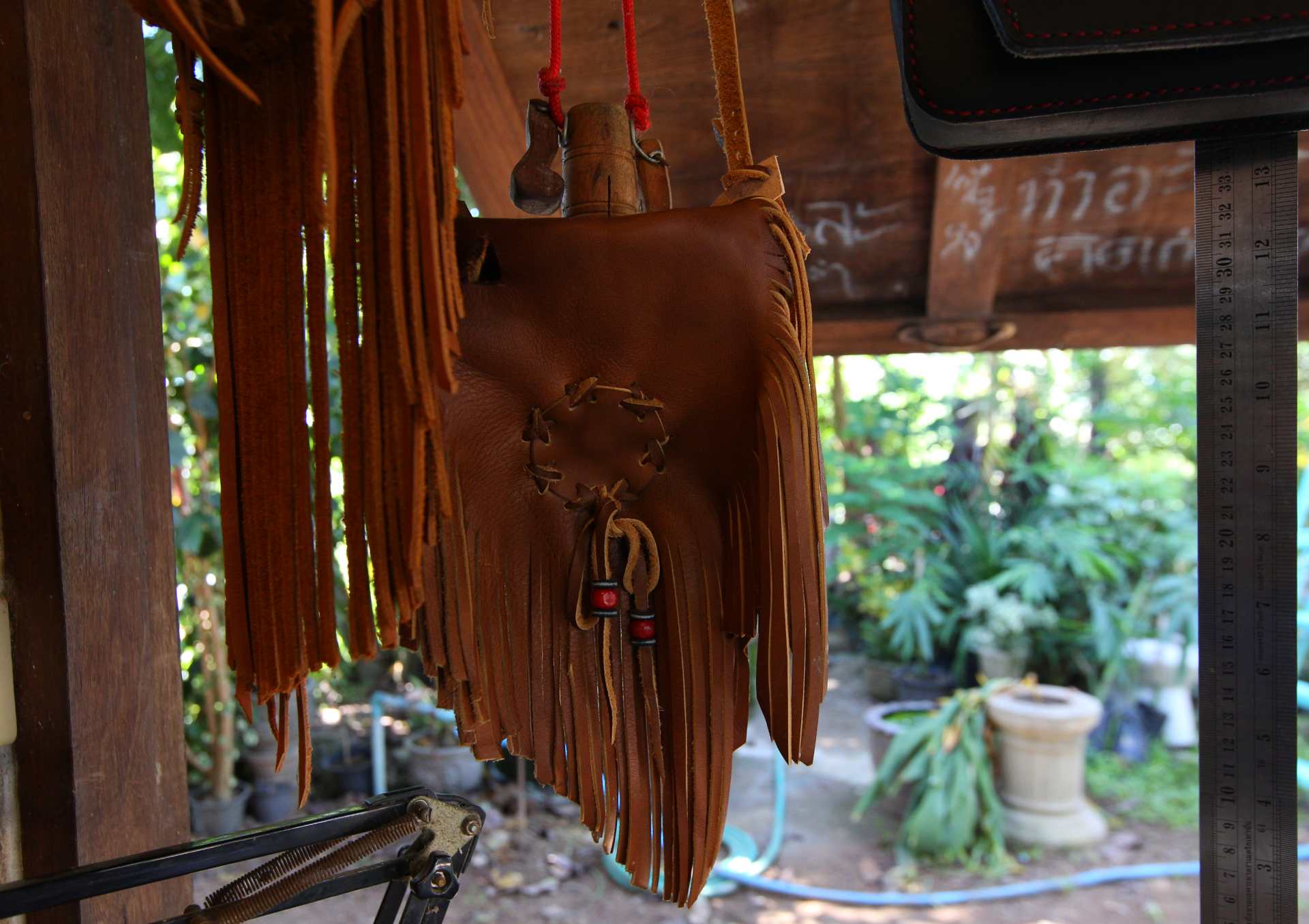 Win wanted to take us to the workshop of his friend, a local leather craftsman who sells his contemporary goods across Thailand. On our way, we stopped for the Thai version of Tim Hortons: an iced coffee with plastic-bag handles for motorcycle compatibility and a soft-boiled egg served without a shell, more runny than we’re used to, and jiggling in a cup with salt, pepper and chili sauce.

After gulping down our breakfast, some struggling with the texture more than others, down back alleys and into the Lampang suburbs we went, arriving at a small suburban garage where Bob Dylan blasted from somewhere inside.

As we approached, Sung, the leather man, came out to greet us. At first look, he reminded me of my dad; his hair fell to the middle of his back, and he had the kind of goatee typically sported in the biker world. While you might think this would make him seem hard, he was anything but. Soft-spoken and even slightly shy, he led us quietly inside and into a room that was a work of art in itself.

His worktable looked out on a patch of jungle, with tools strategically placed for accessibility. Rulers and extractors and hammers and finishers all within arm’s reach. Skulls watched from the walls. While delicately adorned with flowers, the bullet hole was still visible. 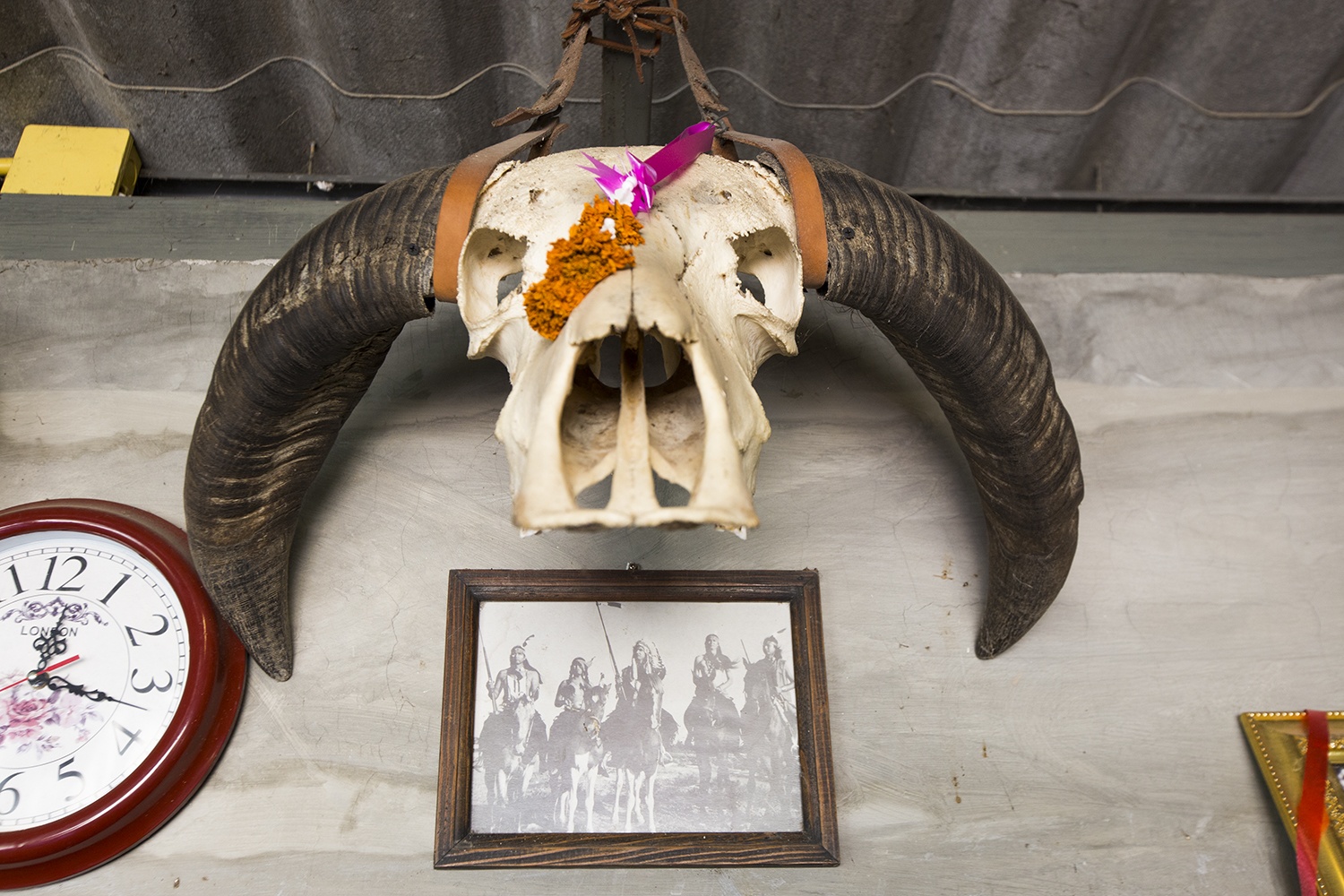 Skulls mounted on the walls at Sung’s workshop could tell a story or two.

Taking my wrist, Sung measured out a bracelet. He sliced the leather into form, carving fine lines into the band. He worked silently, even as we peered over his shoulder. I was astounded how quickly he entered the artist’s flow, even with the added pressure of our 10,000 questions.

He said it was like meditation for him, this kind of work. Thinking of the meticulous concentration needed to stay within the lines, I could see why. 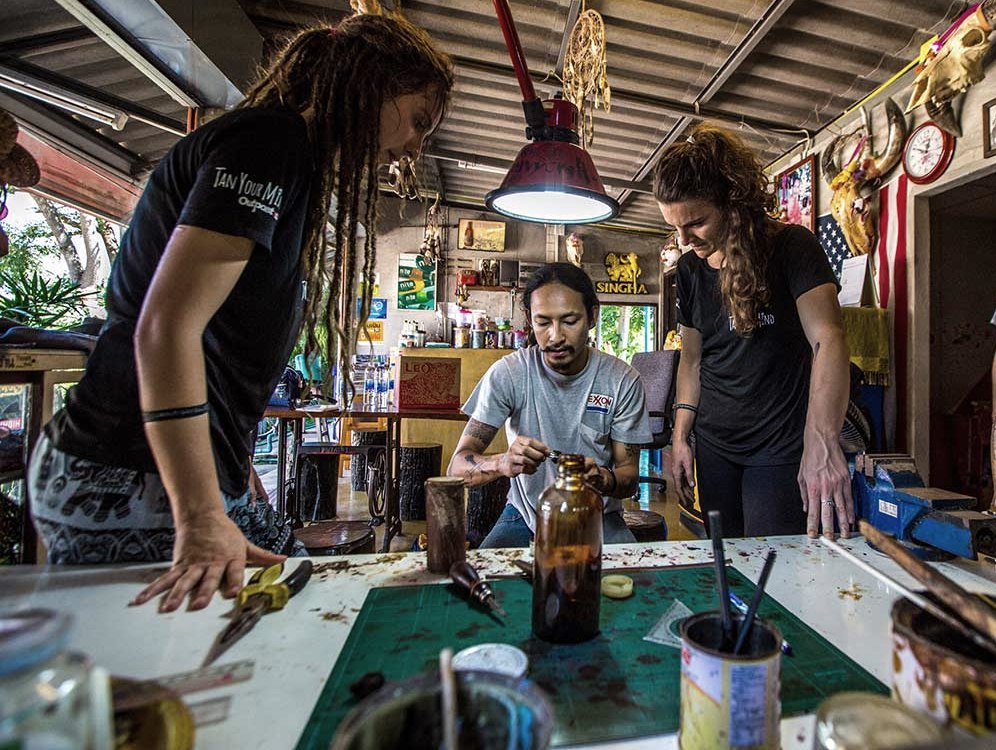 At the shop, Sung makes a handcrafted leather bracelet for Lena. 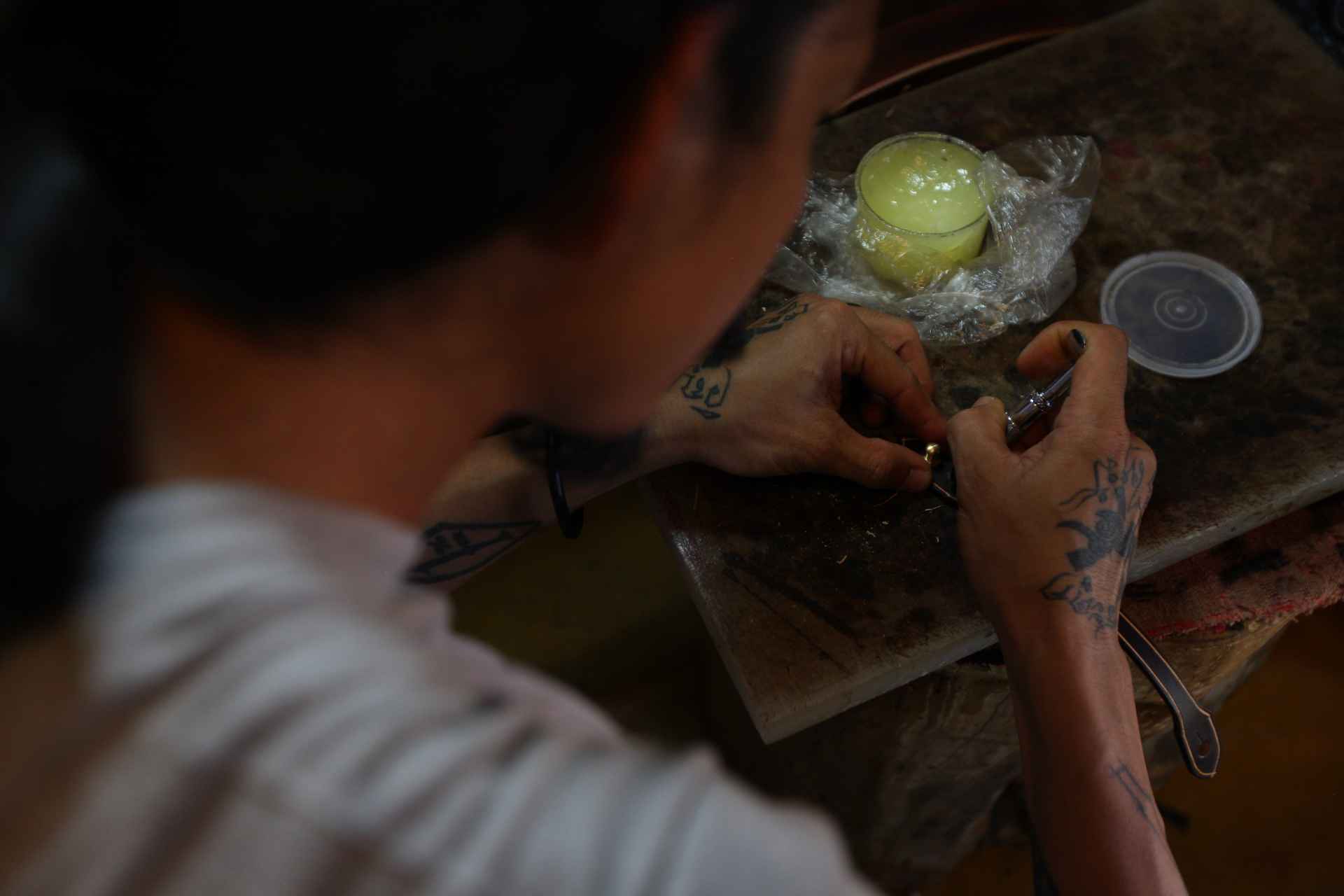 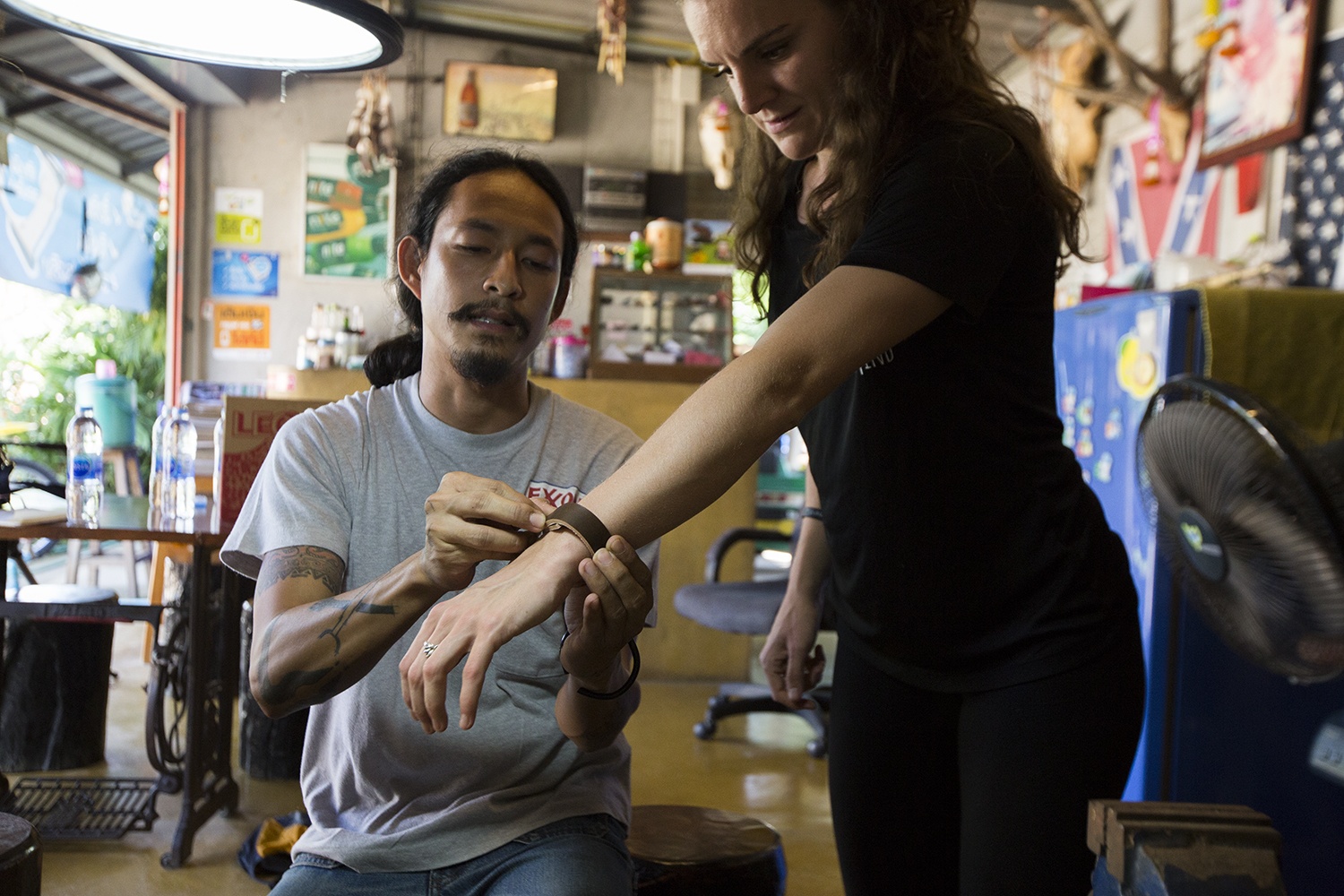 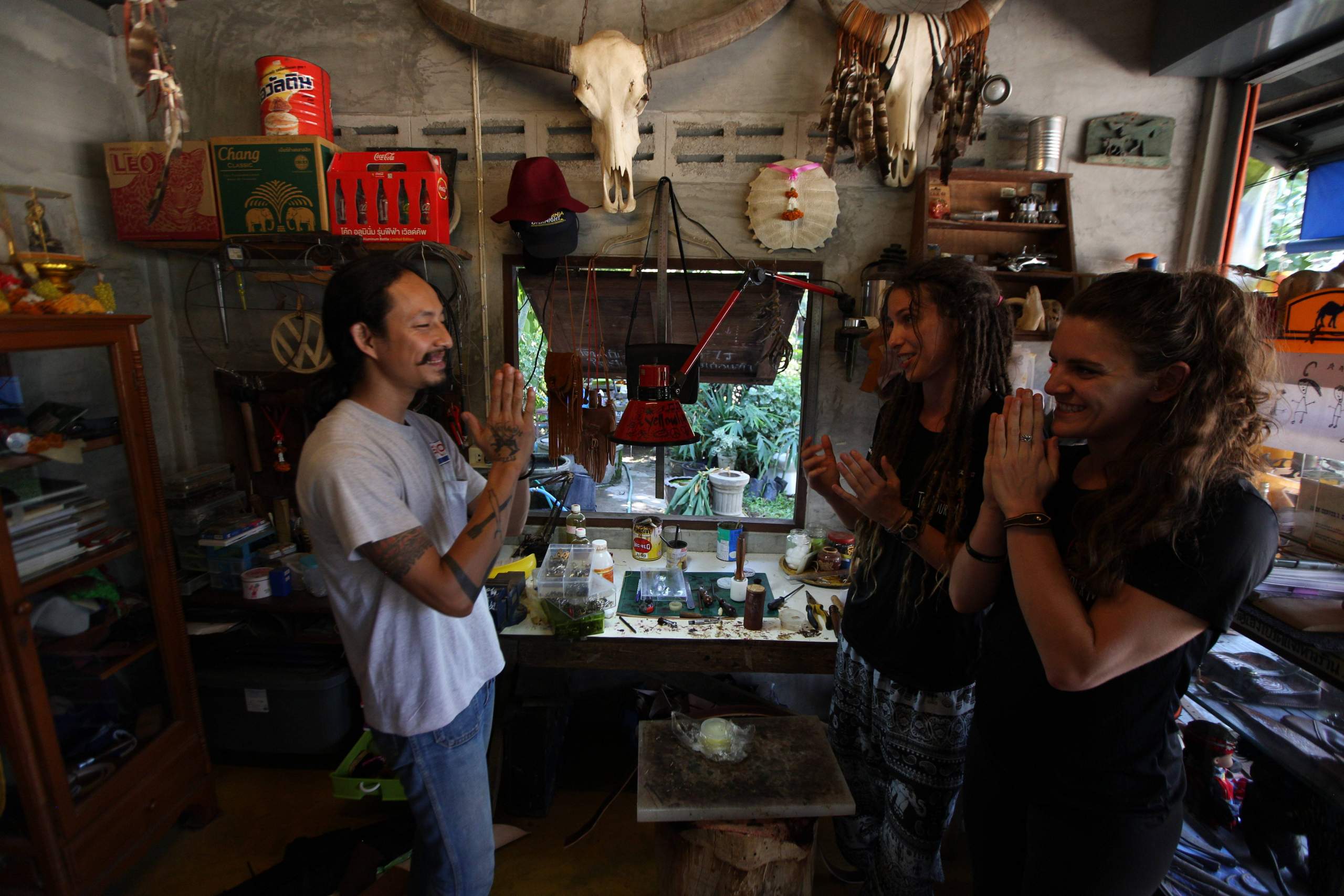 Wearing her new bracelet with pride, but mostly feeling grateful for meeting a new friend.

“This is where we come to chill,” said Win, gesturing out at the tropical view with one hand and extending a bowl of freshly plucked guava in the other. From the covered porch, you could see the muddy river ambling on outside, and palm trees swaying from their leafy heads to their hips.

“We come here and have a couple drinks and make music and art. This is the real Lampang.” 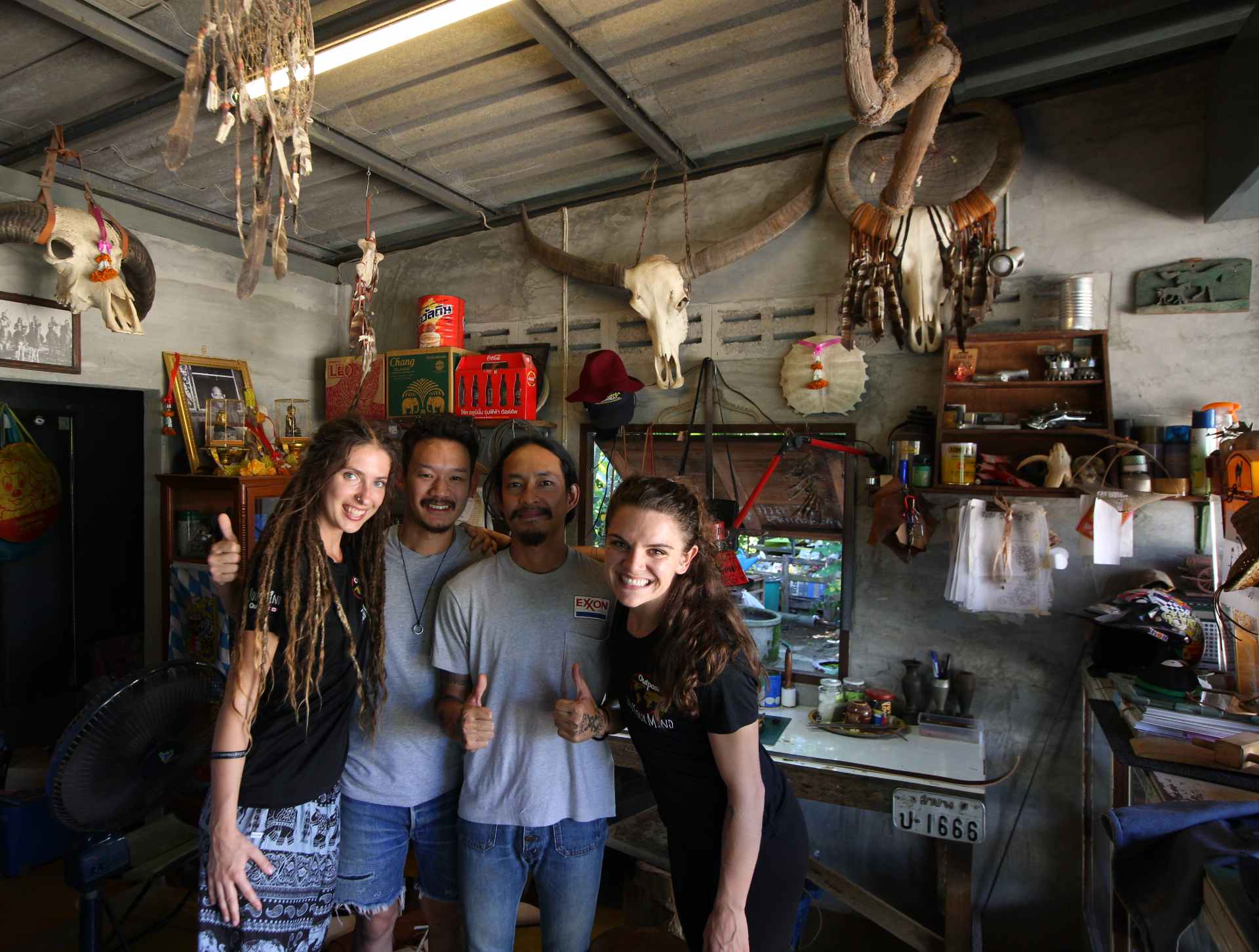 Lena, Win, Sung and Sue. This is where we come to have a few drinks, to chill, to make art, Win tells Sue. “This is the real Lampang.”

Through Win, we also visited a little-known mountainside temple, survived a perilous tuk-tuk ride, drank soft-boiled eggs from a glass, sipped coffee from a cup with a plastic-bag handle, and did so much more we might never have done were it not for Win. We also met some of his regulars at the restaurant: producers, artists, writers, and photographers, many of whom are his friends. He invited us into his kitchen and invited us into his home, and let ask about his life and his mind and, a typical millennial, his plans, of which he has many.

I thought back into my life in Vancouver, where so little of it is defined by the city. No, it’s the people I surround myself with and the things we choose to do that define our experiences of a place. It’s never the city itself.

While we didn’t get to show you the teak-wood carvers, what we did do was show you the most invaluable offering that Thailand has, a most accessible and attainable experience: the human one. 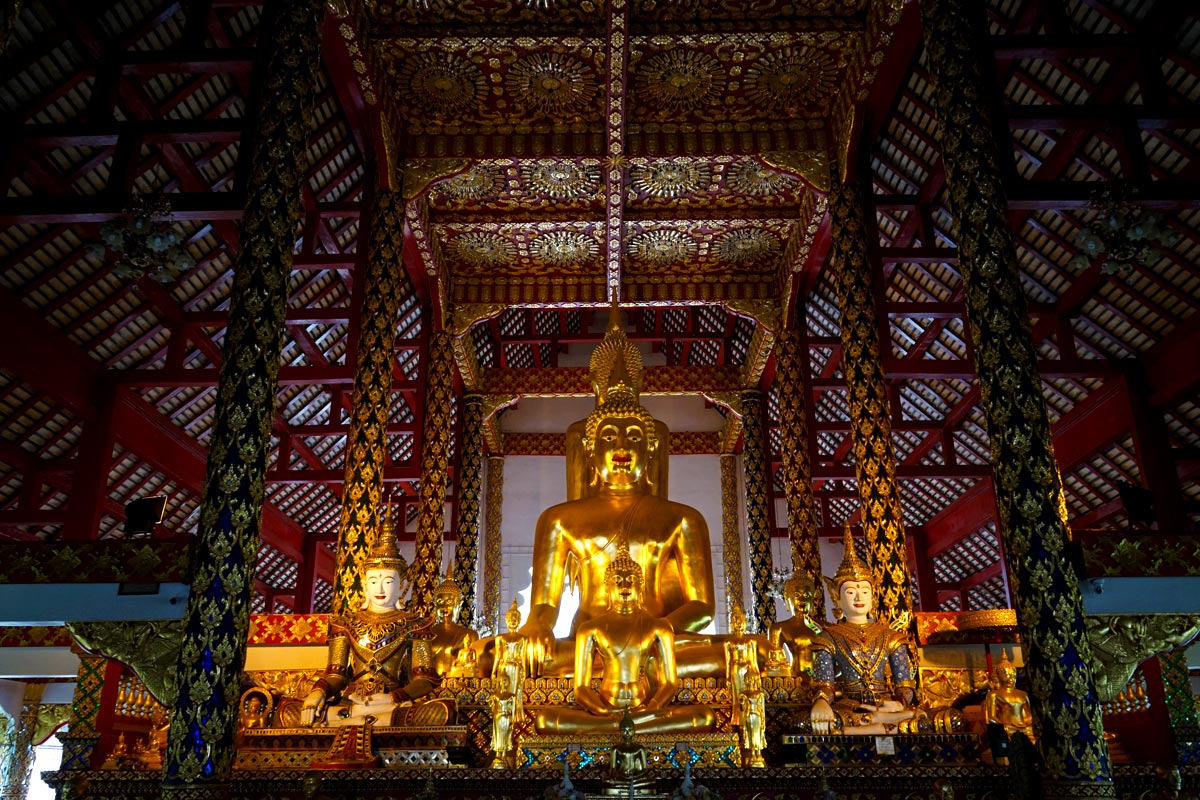 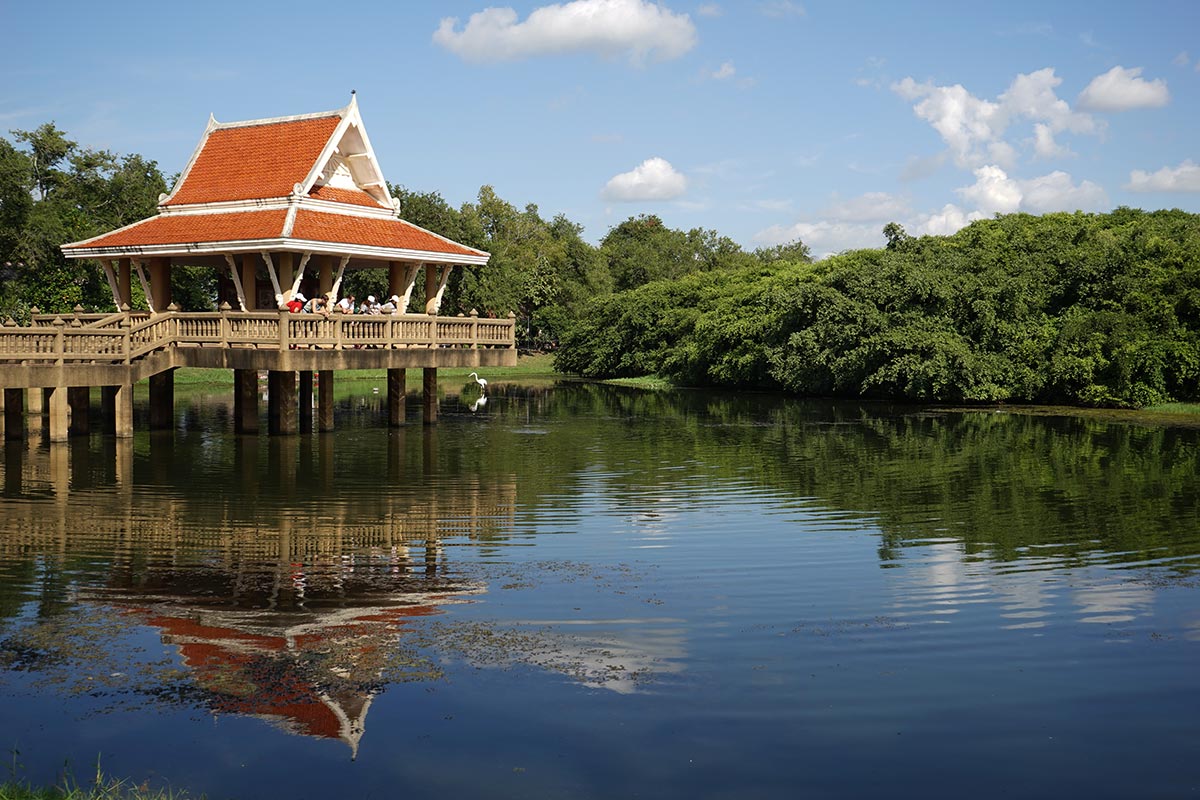 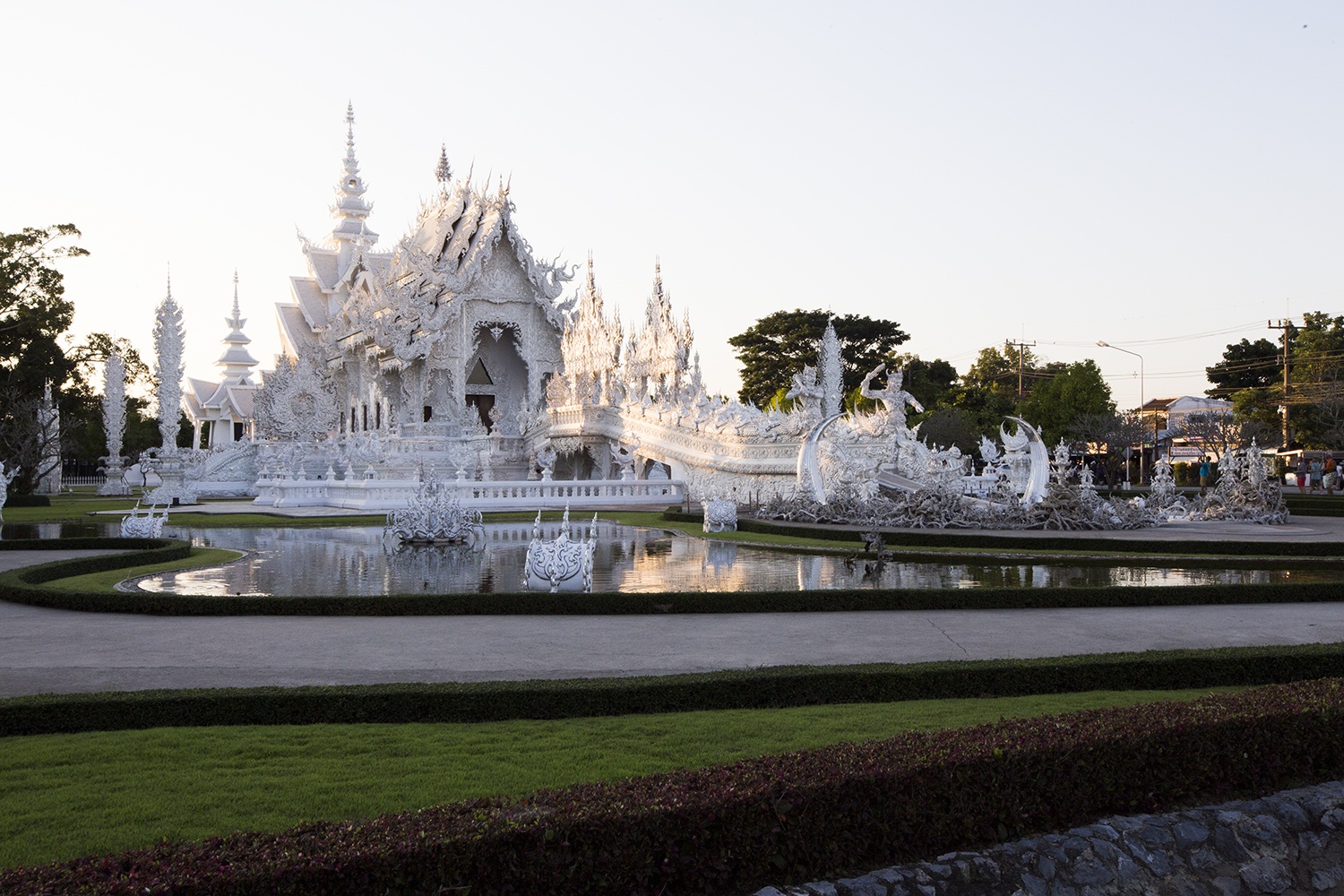 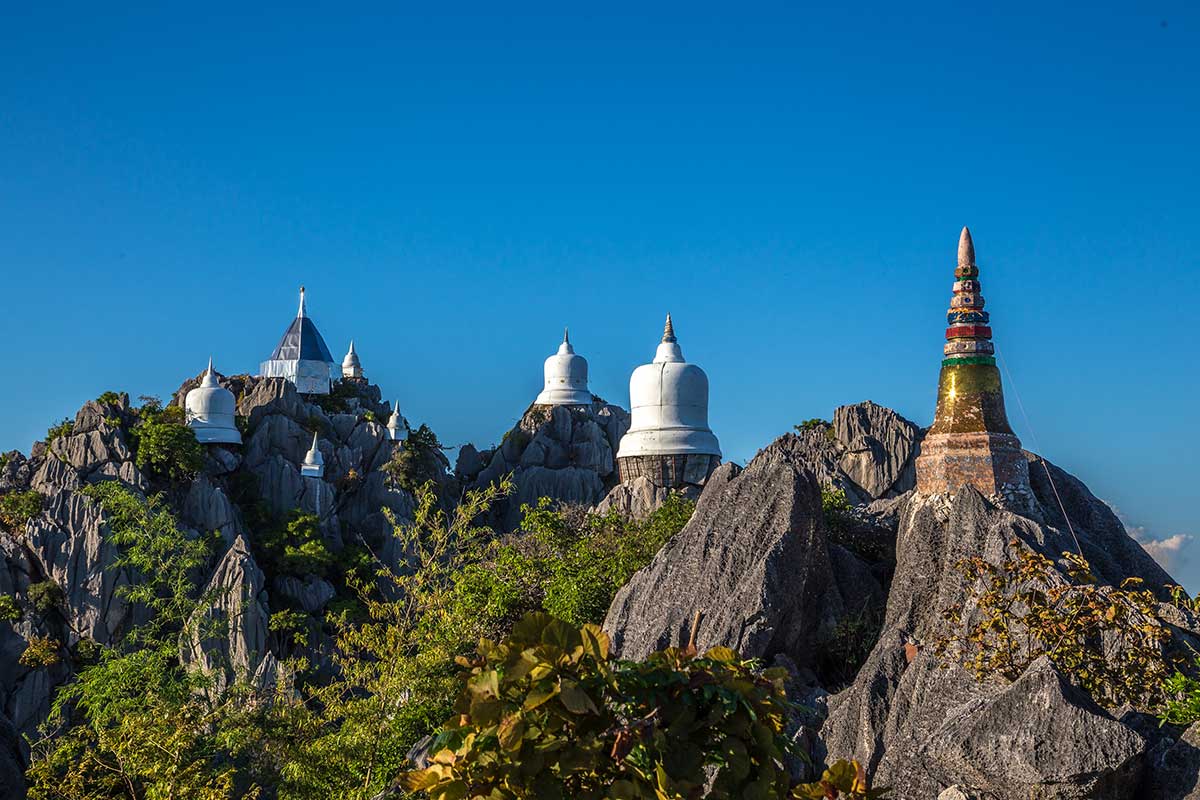 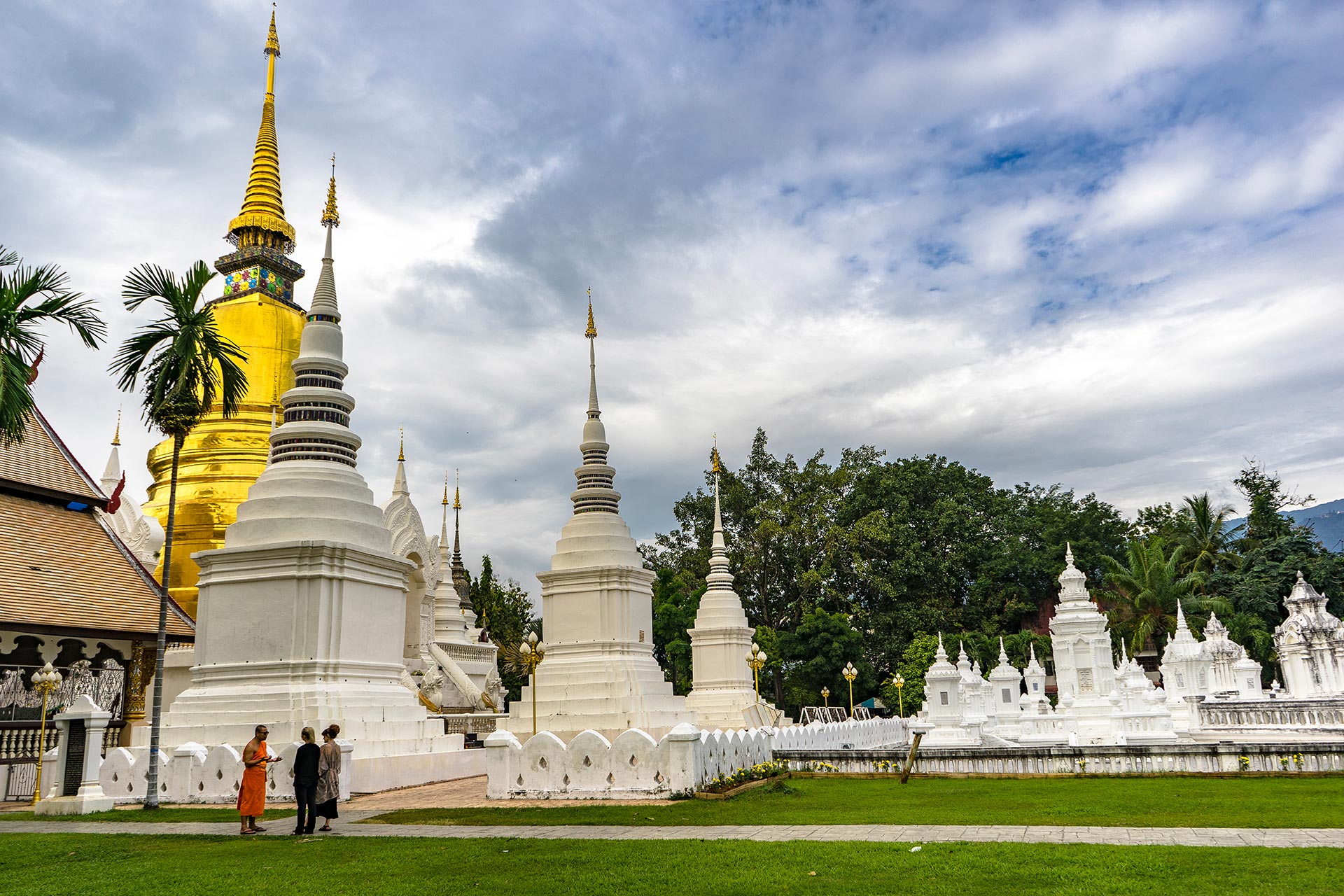 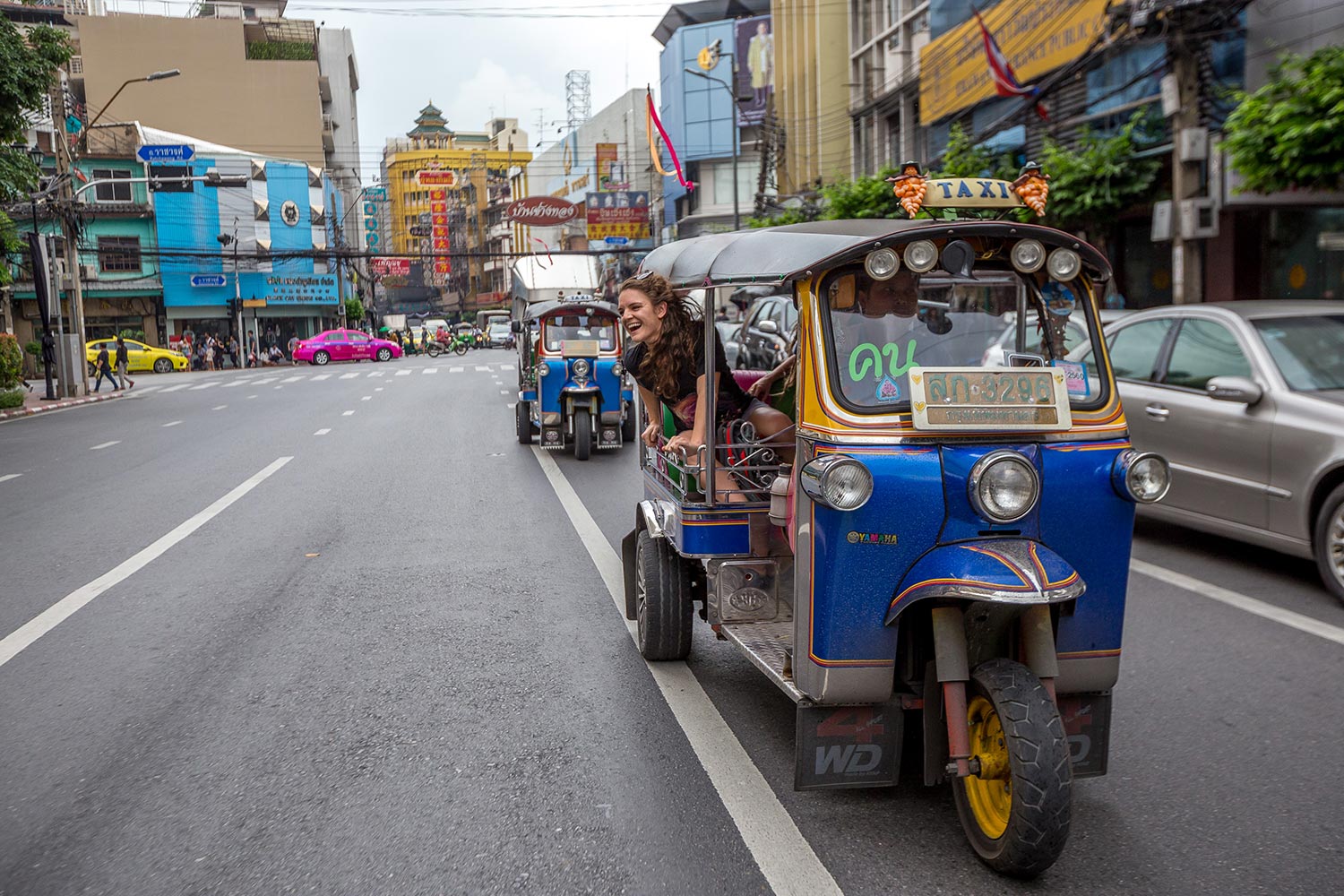 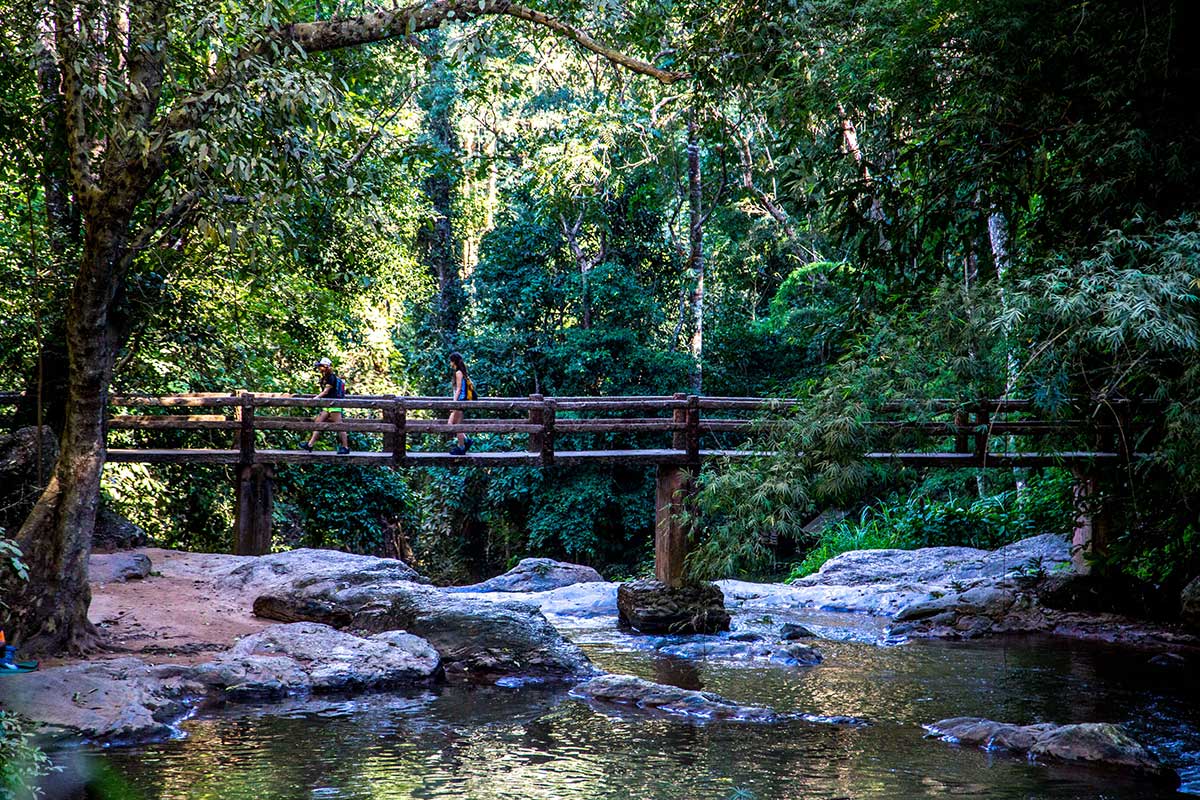