Makeshift vine ladders, baboon hordes and sudden cliffs: as this cross-continental motorcyclist learns, you won’t find a better adventure than in the jungles of West Africa.

Story and Photos by Luke Gelmi

It’s stinking hot in the heart of West Africa—yesterday, while utterly lost in the Guinean outback, the temperature gauges were registering over 100. I still can’t believe the Enfield motorcycle and I have survived it; neither of us are equipped for this, yet we’re getting the job done.

I’m so proud of this bike.

It seems utterly unfathomable that a few months ago it was spotlessly clean, thumping its way through the cobblestones of the Cotswolds, in south central England. We jumped over the Strait of Gibraltar, then blasted down through the deserts of Morocco and Mauritania, into the green lands of Senegal and the flats of Guinea Bissau.

But I think this Guinea—the arch-shaped country of 12 million stretching from the Atlantic into the jungles of Liberia and the Ivory Coast—is going to be my favourite.

Early signs are good. In a word: mountains. Here in the Fouta Djallon highlands, erosion has made jagged canyons and sandstone valleys out of everything. Plus they speak French here, which, if I’m honest, is a whole lot better than my Portuguese and Arabic…

Today’s “hotel” has a bucket-and-cup shower, squat toilets, no lights, and they charge 25 euros a night. That’s almost 40 dollars. There’s nothing around for hours, it’s late in the day and I’m lost as is.

I begrudgingly unload the Enfield. 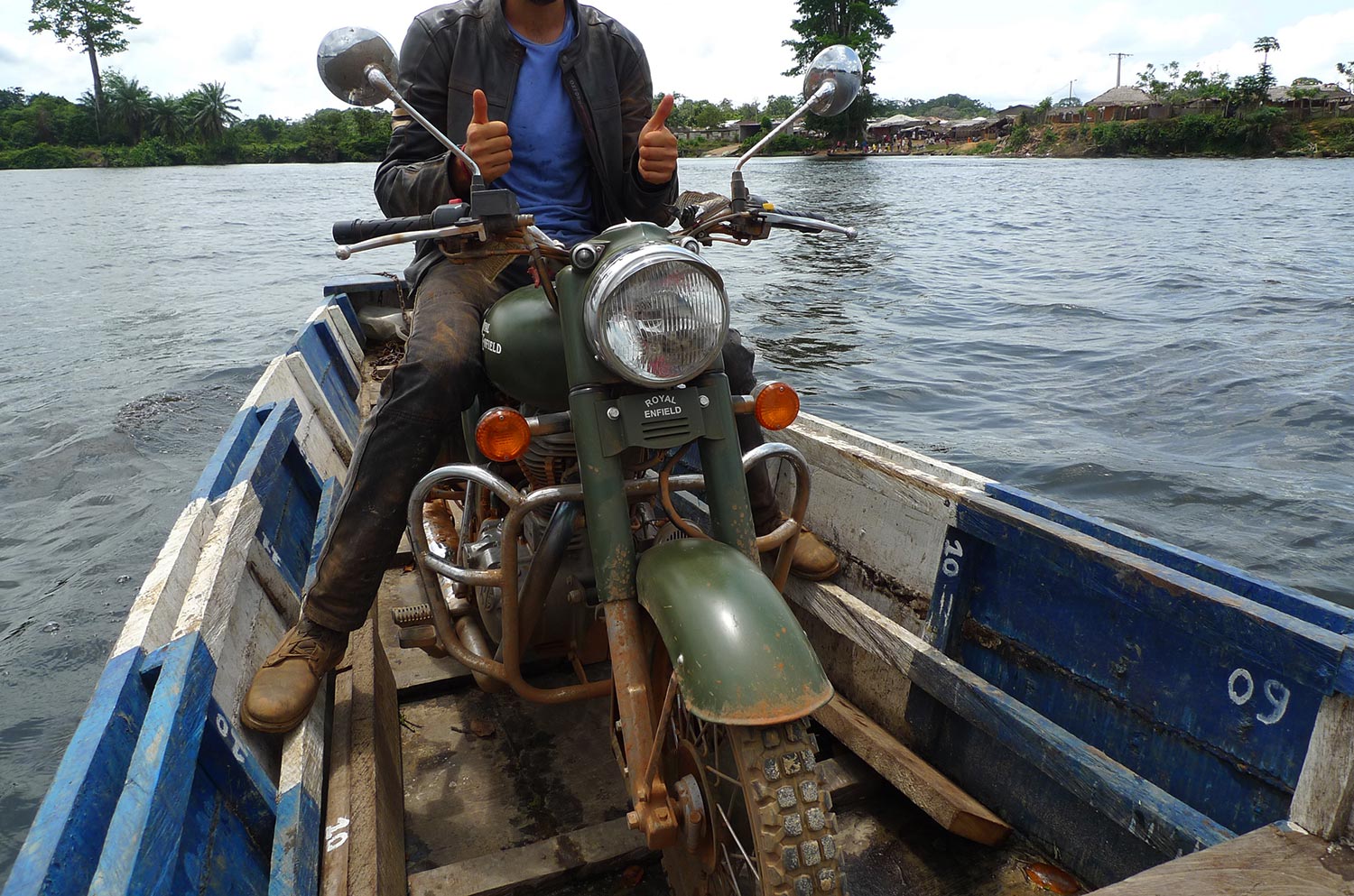 We’ve made here just in time to fit in an afternoon hike—me and Jon, that is, a fellow motorcyclist I’d met doing a similar ride around Africa.

Our fearless leader, hotelier and hiking guide is an overflowingly talkative man named Hassan. “He’s so bloody energetic, he must be on something,” I think to myself. But his English is solid—in any case, it’s much better than my French—and he recommends to me the “Indiana Jones” hike.

“Why do you call it the Indiana Jones hike?” I asked.

“You will see!” he gives me a big, gap-toothed grin.

Well, I’m not going to argue. He leads me down a dusty beaten path surrounded by scratchy dry scrub and bushes that are giving me a severe exfoliation on the calves.

Not far down the trail we steeply descend through gaps in massive, smooth, cool, grey rocks. Rocks the size of buses propped up on their ends. They’re enormous.

When we hit the bottom, I see trees growing in places that no one told them it was impossible to grow. Random cracks and crevices in the rock walls are home to massive trees—just clinging on— whose roots swing down to us on the floor below like massive vines. Some of the trees look like they’re just floating in mid-air.

With massive rock walls all around, and the trees reaching for every bit of sun in the canopy above us, there’s not a whole lot of light left for us down below, and the atmosphere becomes heavy and cool and damp.

It feels like we’re in a secret. We’re speaking in hushed tones…

For hours, we hike about in these hidden places. Streams of water come and go under dark and mysterious caves. The labyrinth just keeps going and going and going… Sometimes the rock faces open right up like a cathedral, and other times you have to suck in your gut to squeeze through the narrow gaps.

Forty dollars is nothing. This is priceless.

I’m champing at the bit to run off on my own and soak in the dark beauty of it. I want to have it all to myself.

But we’re out of time; the sun has given up on us.

We climb out into the real world as suddenly as we’d descended in.

The sky feels too big.

I’m woken up to some honey on bread and a thermos of Nescafe. That’ll do me just fine.

Today, the fearless-leader duties have been passed over to his friend, Cousin Mohammed.

First impressions: Cousin Mohammad doesn’t talk very much. It’s already hot—the sun is only just getting started—but Cuz Mo, I kid you not, is wearing jeans, a jumper and a toque. It’s weird, but not uncommon—in fact, it’s extremely common. I can’t explain why, but it’s popular to apparently wear all the clothes you own, regardless of how hot it is.

Cuz Mo leads us at a march. 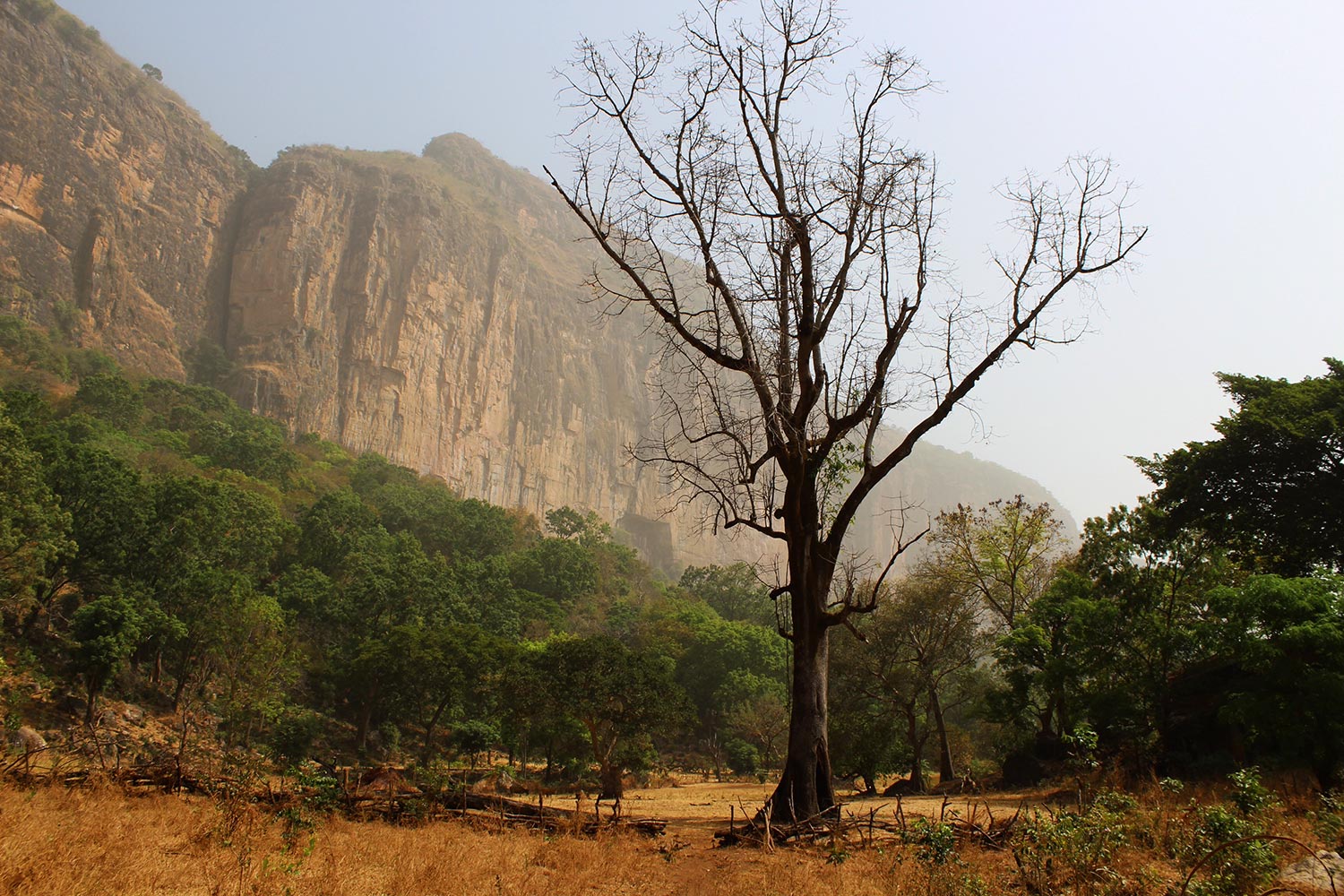 The Guinean landscape, lush and humid.

We walk past “Hyena Rock,” which should be called Pride Rock—it’s straight out of The Lion King—and then we walk past “Viagra Rock,” snapping appropriately inappropriate pictures.

While we’re dicking around, Cuz Mo hears what I can only assume is a barking dog.

The dog barks again. Far off…

Gorillas!? Are you serious?

We head toward the barking, and my heart can’t stop pounding. I can’t believe we’re actually going to see a gorilla. Then, across the other side of the valley, sitting at the peak of a mountain, Cuz Mo points to a group of animals and shouts, “Gorilla!”

We spot a troupe of baboons silhouetted against the morning sky.

We watch the baboons bark some more. Who knew that baboons sound just like barking dogs?

We walk a short way farther down the valley, and then the ground just disappears.

Over the edge of a sudden precipice it just drops off—an insane and nauseating distance—straight down to the savannah below. The cliff is so sudden and sharp that you can stand right on the very edge of it and feel the dizzy sickness of being scared witless. 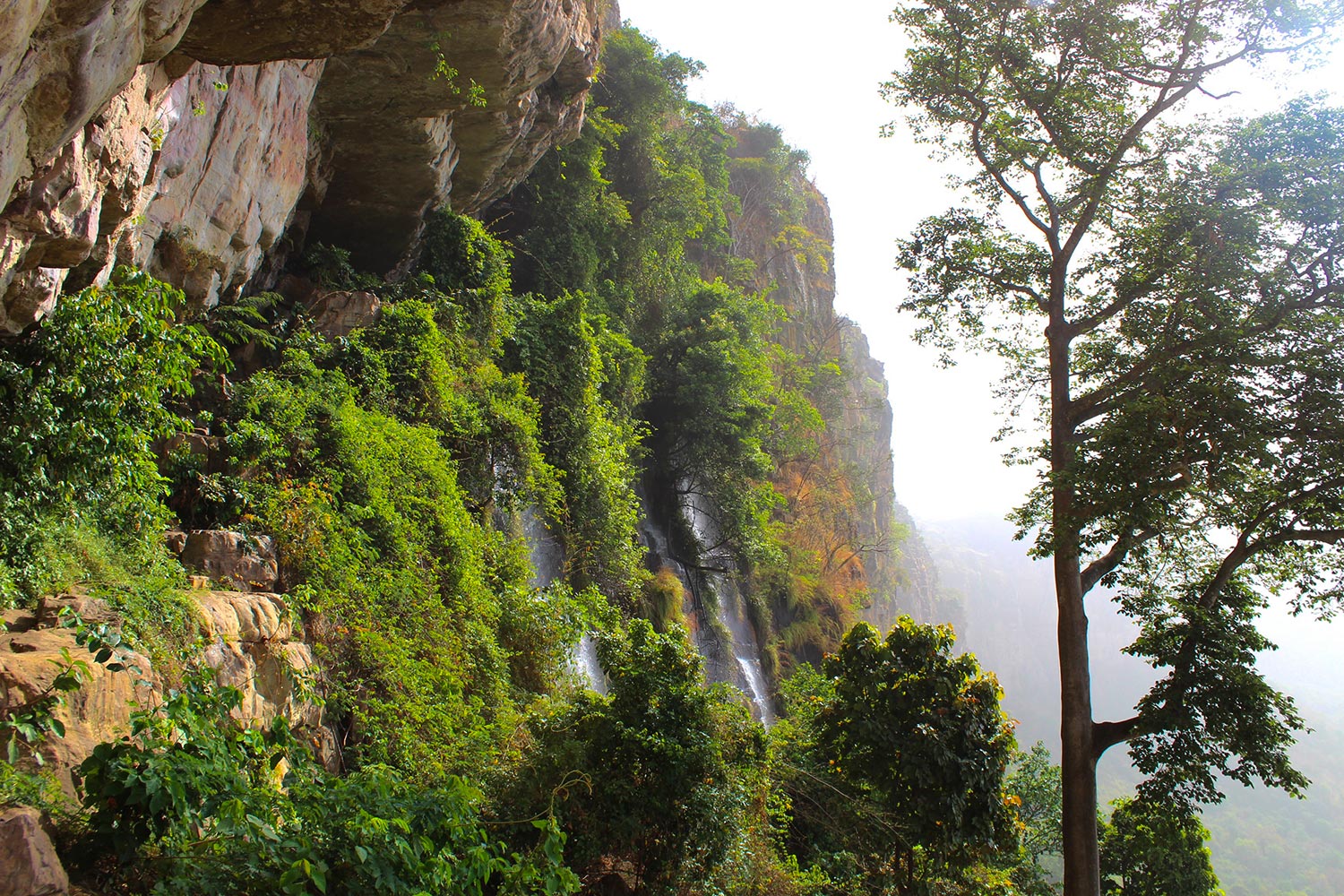 This is a drop you don’t want to fall down.

Looking to the side, the cliff, which seems to be leaning out, stretches away like an immense wall to a misty vanishing point. Looking ahead, you can just make out the paired cliff on the other side of the valley through the haze.

Looking down, there are vultures and eagles, tens of them, playing in the updrafts beneath us.

Beneath us! Where the Dickens did all of this come from?

Guinea’s showing off and there’s nowhere else I’d rather be. No one gets to see this stuff…

I’m already happy to call it a day. I could sit right here and just soak it up ’til the sun sets again, just enjoying the show.

But there’s still more to see.

Cutting a hole into the cliff face is a tiny, trickling stream that meanders its gentle way diagonally the long way down to the plateau below, and occasionally spilling off the side into a waterfall. It makes a perfect path for us to follow.

The view from the bottom of the cliff is, if anything, even more impressive and imposing than the view from the top. “The wall” stretches off in both directions as far as you can see. Rich golds and blacks and whites all swirl about like soft serve.

On the valley floor, we strafe the cliff side on a well-worn path that becomes a goat track, which slowly peters out to nothing. Before we know it, we’re bush-bashing, obviously lost, crawling on our bellies to get through the scrub like marines crawling under barbed wire.

What is Cuz Mo doing? This was definitely not part of the plan. The sun is baking, and the humidity in that fog is heavy enough to make me pour sweat.

Hours pass, and I’m convinced we’re never getting out. We’re gonna die in here. I’m sure of it. Then, a stream. Mo seems pretty chuffed with himself, like a man who’s just saved his own bacon. Thank God that’s over…

We take the chance to have lunch. 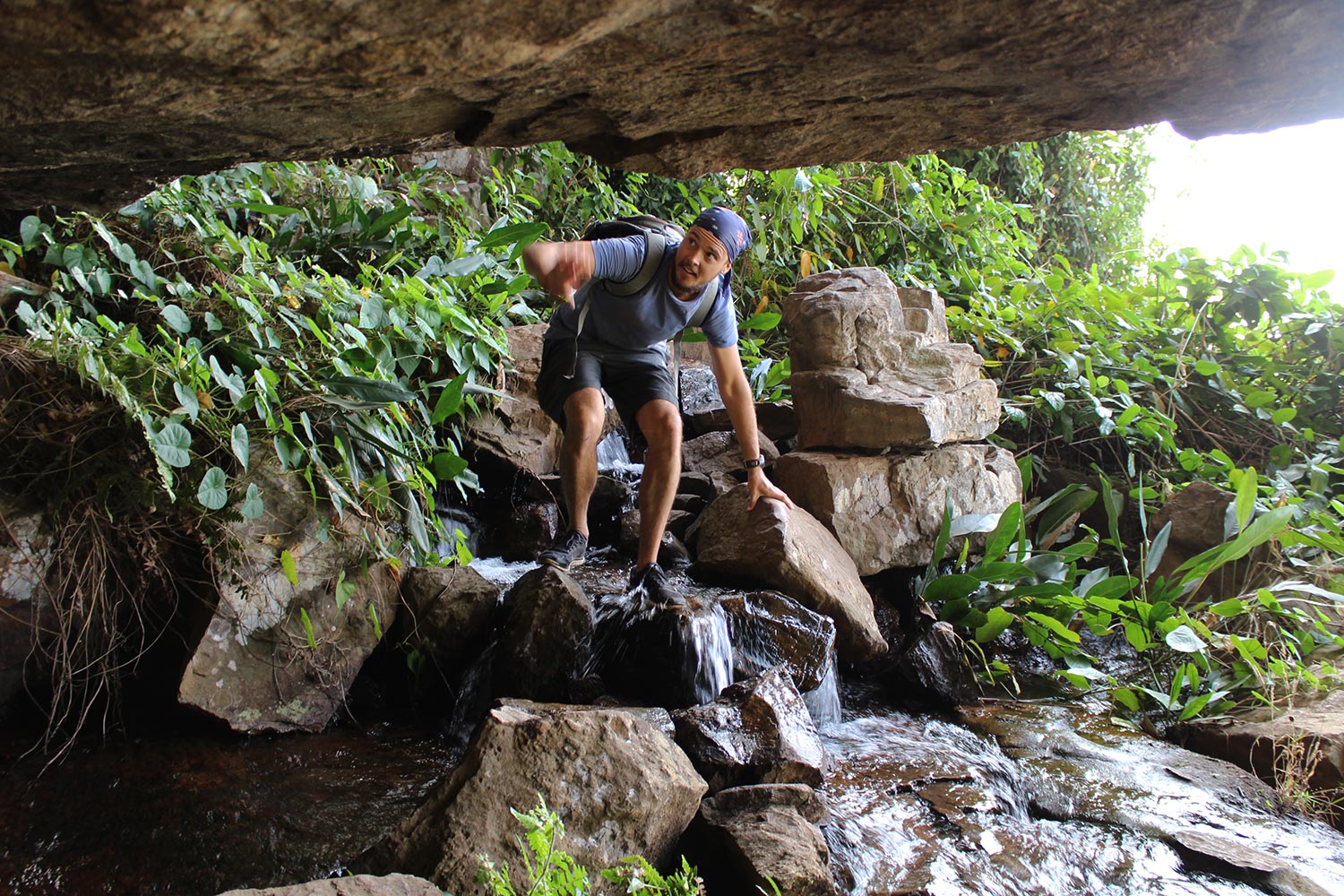 Luke squeezing between the rocks in Fouta Djallon.

Sitting on rocks in the middle of the stream we chow down on bread, and—of all things—some spaghetti. The air is thick with butterflies that don’t mind landing on me. The water is full of tiny fish that go mental for any morsels of food thrown to them. Cuz Mo heads downstream a bit, strips off to nothing, and gives himself and his clothes a good wash. Turns out under the jumper, jeans and toque were another two shirts and a pair of long johns.

He’s giving us a confused look, like we’re missing a great chance to do some laundry. No thanks, Mo. He takes an hour to do the laundry, then puts all his wet clothes back on again.

Up the stream and back to the cliff face we go.

I’ve seen enough wildlife documentaries to know that baboons are mean, with massive fangs like teeth. I grab the biggest stick I can find and keep walking.

We eventually spot the source of the noise, jumping through the trees a ways off: smaller creatures, chimpanzees or monkeys.

What goes down must go back up, it seems. There’s a narrow cleft in the cliff where another stream has slowly chewed its path the mountain for time unmeasured. It’s less of a stream and more of a series of small waterfalls. Where the rock face is too steep to deal with without a grappling hook and a pickax, the locals have built “ladders”—a bunch of skinny bamboo-like branches tied into stacks with vines. 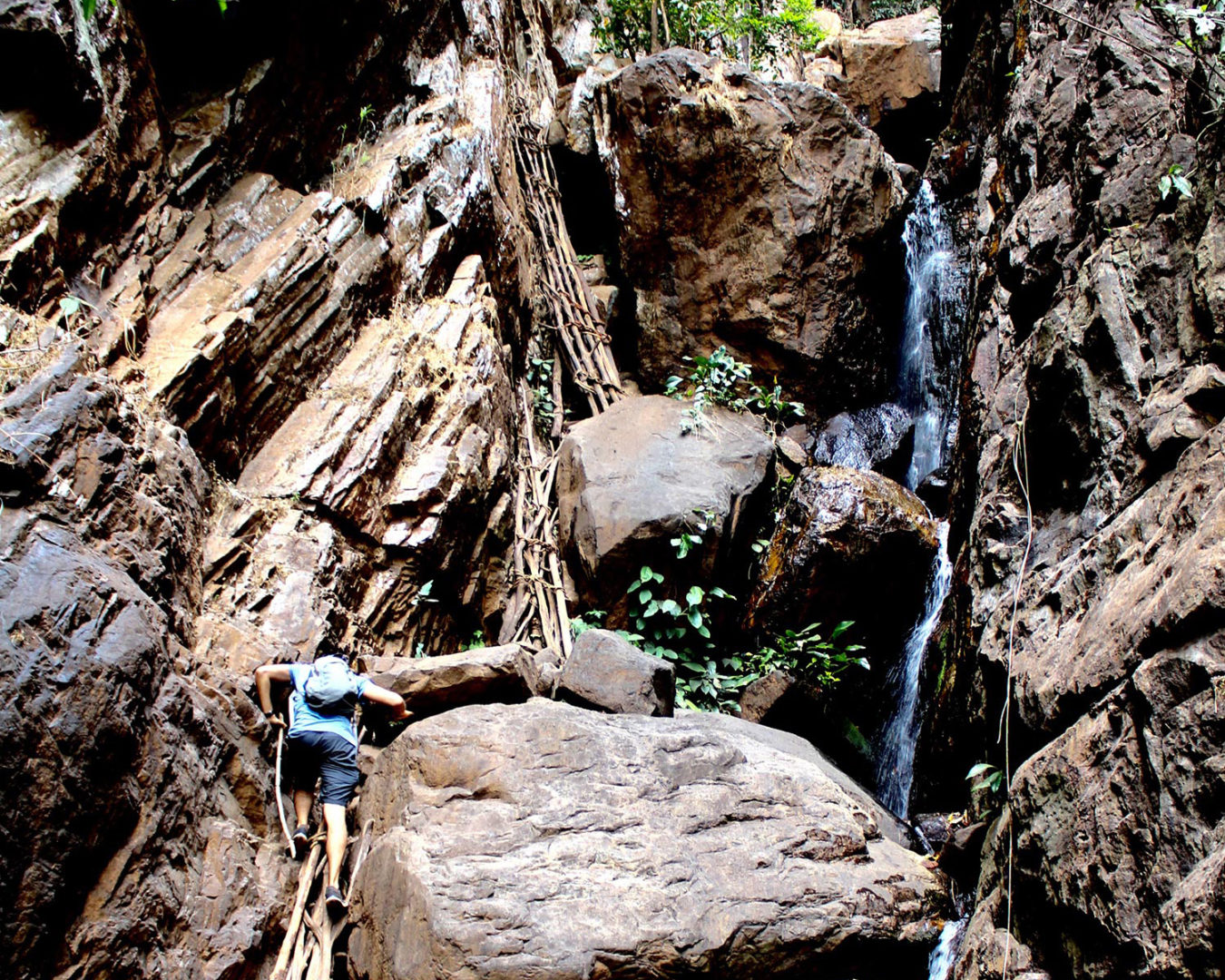 That’s it. High enough to kill you if you fell off or, at the very least, put a dent in your day.

There are no crossbars to step on; the vines tying the stack together will have to do. We climb and climb, all the way up the cleft and to the top of the cliff again.

It’s a flat walk back to the camp, through small herds of cows with ringworm.

A seven-hour trek through the Fouta Djallon mountain ranges in West Africa?

Luke is an adventurer currently based in Paris while he writes his trilogy of books on his trip through West Africa on a Royal Enfield motorcycle. You can find the first book of his trilogy, available for free online, at www.obliviousthebook.com.

United Dragging that Passenger off the Plane was Indefensible. Here’s Why it Happened

Winter in Southern Turkey Means a Vacation Paradise All To Yourself