Whale Up Close | Travelling the High Seas as a Deckhand

Catching a ride on a super yacht (if you’re up to scrubbing the deck) is not a bad way to see the world.

Story and Photos by Hejsa Christensen

I lay in the darkness, clutching onto the sides of my tiny bunk, my body levitating with the intermittent falling of the ship, listening to her steel hull shriek as the angry sea pummelled her again and again. I felt like I was trying to sleep trapped inside a dryer, being tossed like a worn sock, deafened by the vibrating metal.  But the impossibility of sleep wasn’t what drove me from my bed.

The wails of the ship weren’t right, weren’t as I had heard them in storms before.  She couldn’t withstand the force; I was sure of it. I was sure that by daybreak I would be huddled inside one of the lifeboats with the rest of the crew of the super yacht, in the middle of the Atlantic Ocean, praying someone would respond to the distress signal that would be sent before dawn. And so I got up to dress for the sinking of the ship, donning appropriate survival clothes — layers, materials that dry fast, and materials that retain warmth when wet. 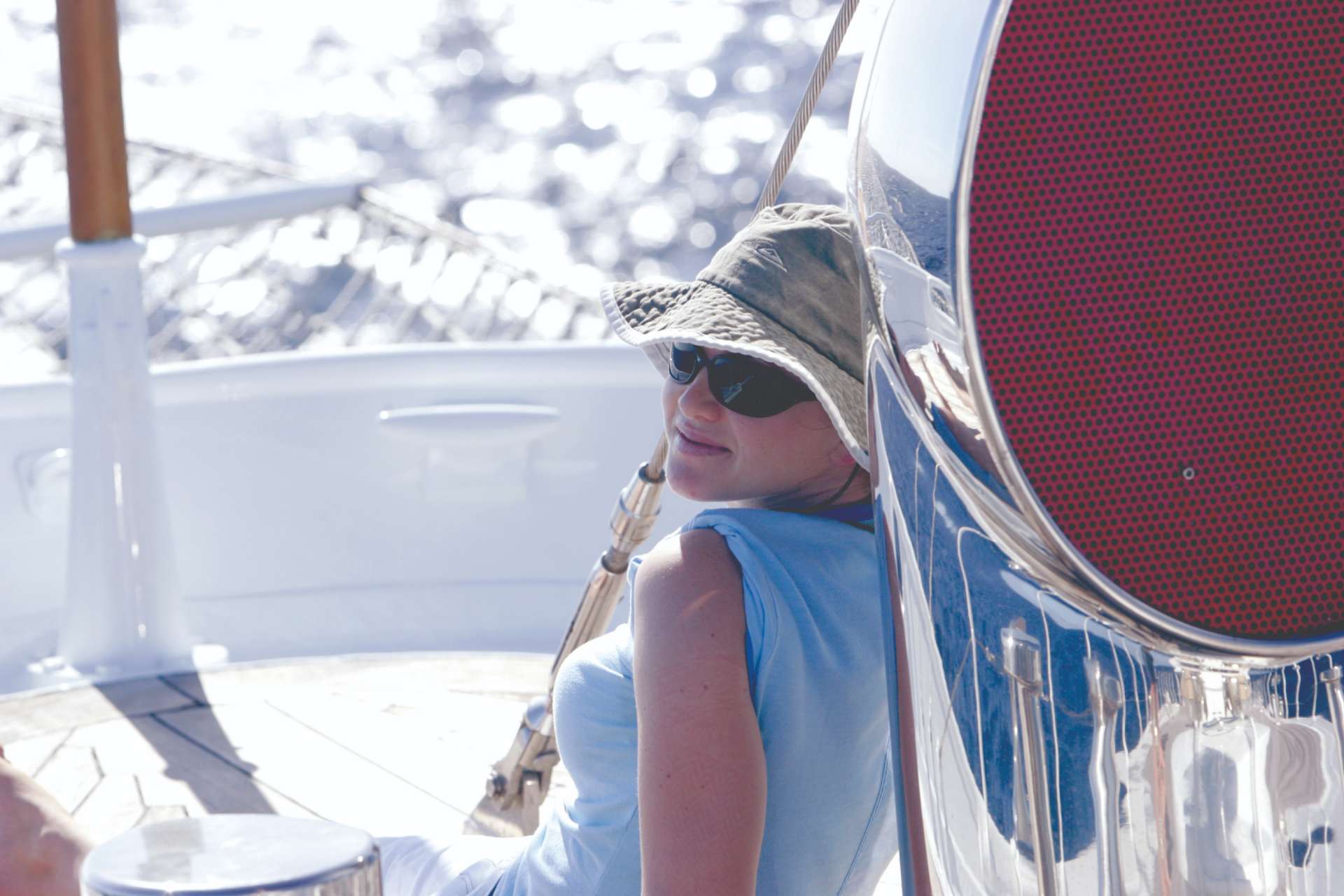 The author on deck, taking a break to view the horizon.

I clambered into what I thought the TV personality Survivorman might wear, having no real knowledge of my own.  Thrown against the walls of the tiny room, I clung to whatever stationary objects I could reach, as I made my way into my makeshift survival gear. And having completed that onerous task, I puked in the toilet before stumbling to the bridge.

At 80 metres, the boat I was on was one of the largest super yachts in the world, the kind not chartered by millionaires, but billionaires.

And while the crew quarters, where I had made a temporary home, were crammed into the fore of the ship, where the ride is the roughest, the rest of her — the library, pool, cinema, gym — was luxurious. The decks were normally staged with plump cushions on custom teak furnishing, perfectly arranged throw pillows and designer chandeliers.

But everything glamorous had been battened down or stowed for “the crossing.” The term referred to the crossing of the Atlantic Ocean, which this showpiece did twice a year between her Mediterranean summer season and her Caribbean winter one. 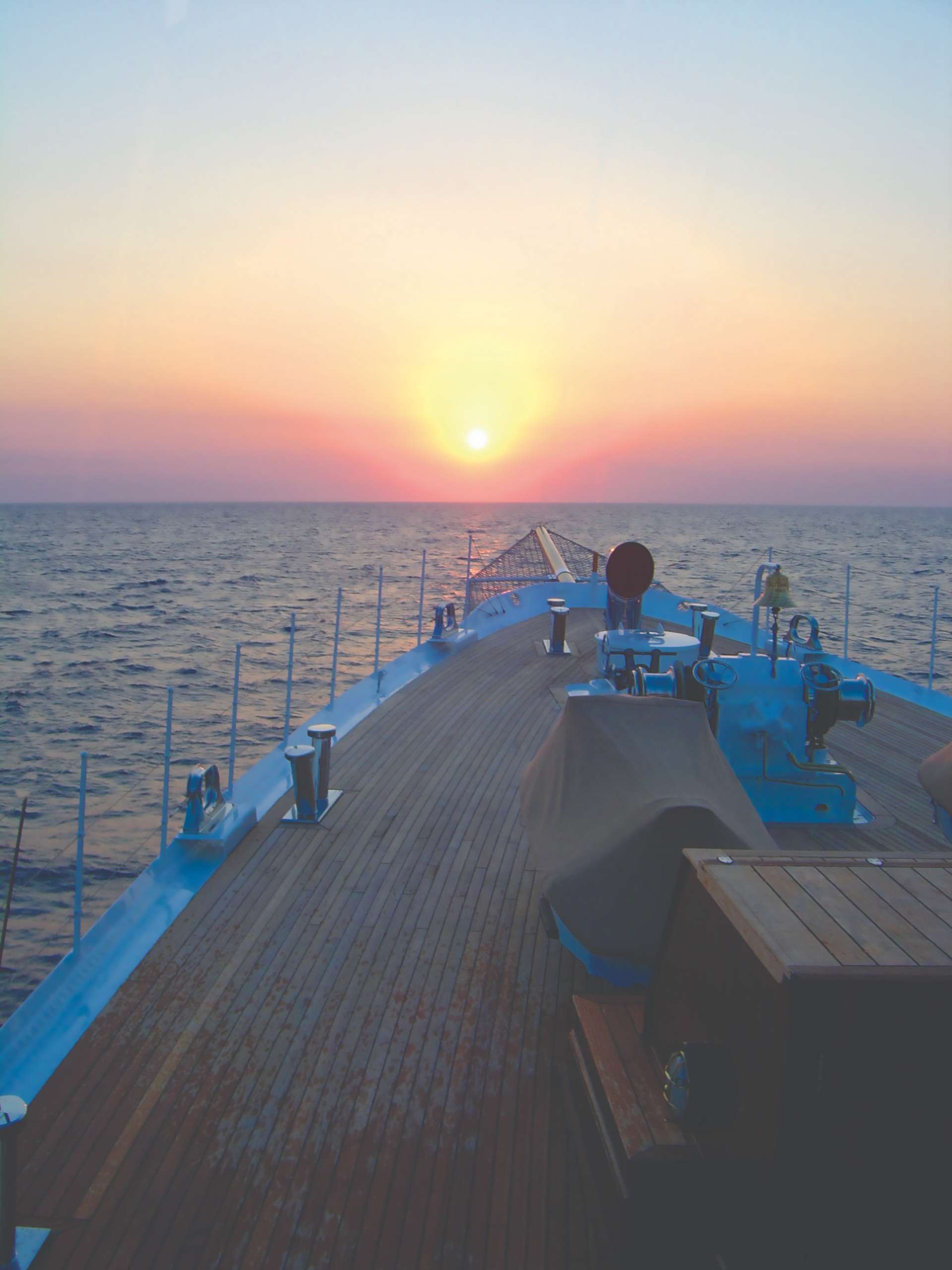 View from the deck, endless horizon and ruby red sun.

At full capacity, the vessel could accommodate 12 guests and 18 crew members, but no guests ever stayed aboard for the crossing. With potentially massive Atlantic swells, no place for shelter during a storm and thousands of kilometres of monotonous blue sea and hopefully sky, traversing an ocean isn’t a pleasure cruise. The dual plagues of seasickness and boredom make many crew members dread the passage.

Our route from the Mediterranean had begun in Barcelona, Spain.  There was a quick fuel stop in Gibraltar (like most of the largest of the super yachts, she was a motor yacht) before we followed the western movement of the North Atlantic Current, circling close to the coast of west Africa, then crossed the wide-open ocean to the Caribbean island of St. Maarten, about a two week journey in total.

I’m not a sailor. I can’t read nautical charts. My most-used knot is the granny. The panels of flashing lights in the ship’s bridge conjure up images of the Starship Enterprise.

But I have seized the opportunity to cross the Atlantic on a super yacht on ten occasions. I’ll work hard at any job I’m given — scrub decks, clean scuppers, varnish rails, wash the hull. I’m not afraid to sweat. Plus, I’m married to one of the top super yacht captains in the industry. I admit that helps, but I’m more than willing to pay my own way through sweat equity, so to speak.

The first time I did a crossing I did it for the adventure — to be somewhere so remote and seldom travelled, and to experience life at sea. The conditions were perfect for a motor yacht. Conditions I have never again experienced, but the memory of which keeps calling me back. The ocean was a still pond, its surface glassy, the sun gaining heat with each passing day, warming more than just the air. I worked four to six hours on deck each day, the exertion from the manual labour offsetting the claustrophobia of floating adrift on a tin can, with no way off.

Each night I had to spend four hours in the bridge at some god-awful hour, waking from scant sleep to the buzz of my alarm. Between dusk and dawn, a minimum of two people are required to be in the bridge, and I did my time as the second person, accompanying the person driving the boat. Every night-hour I was on duty I did my rounds, checking each unoccupied room of the vessel, opening doors and smelling for smoke, fire being the biggest fear in a situation where help isn’t coming and evacuation is such a grim fate.

Walking through her darkened hallways, peering into battened down rooms, was all I saw of the majority of the interior. Super yachting involves combining seamanship with world-class cuisine and adventure with the comforts of a five-star hotel. The standard of service and meticulousness of presentation required to pull off such a feat meant guest areas were strictly off-limits for the crew’s personal use. But I revelled in seeing the sun rise over the sea each morning, splaying colours across the pond, and feeling the salty wind on my face. 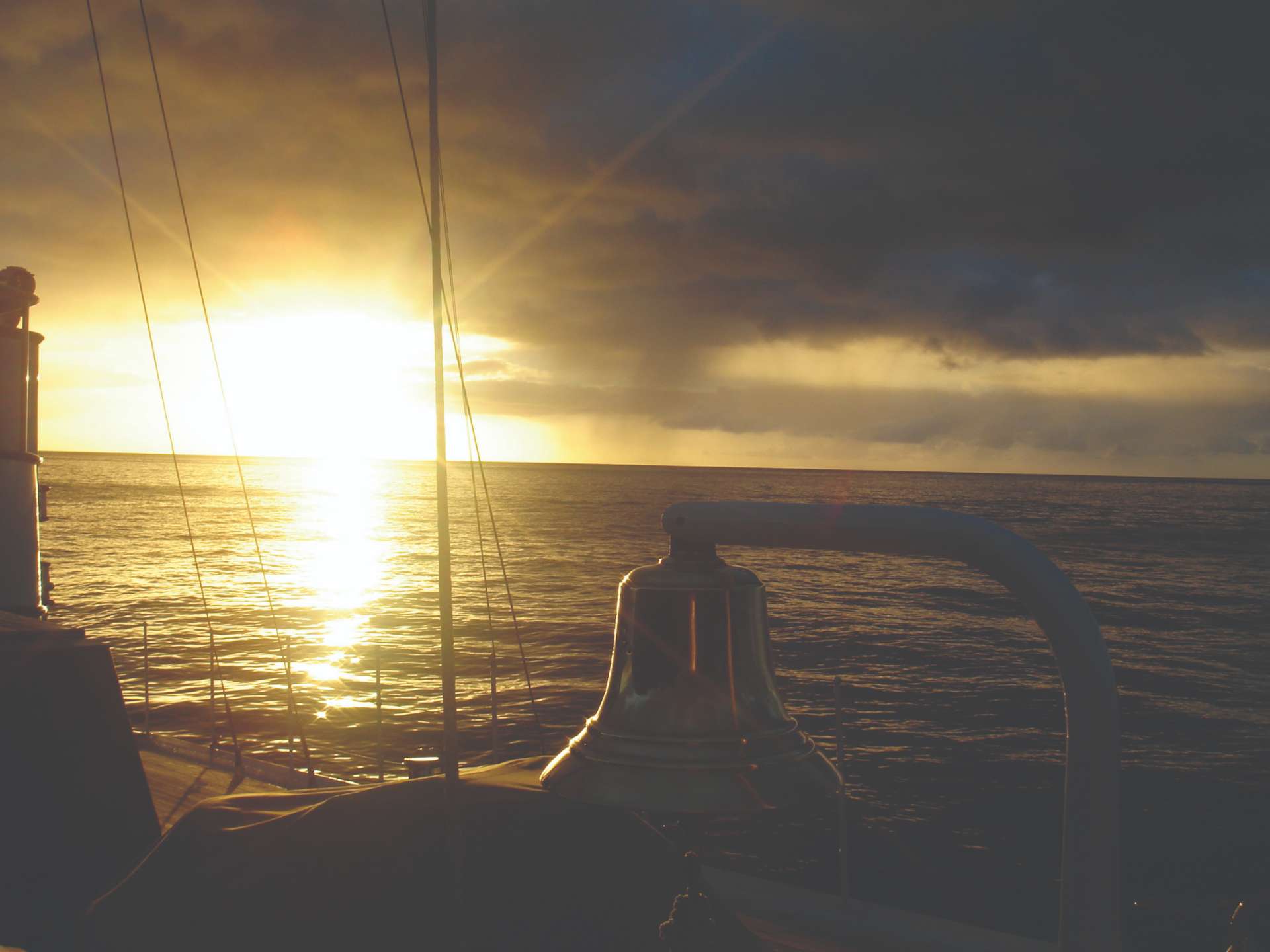 The sun as fireball from the deck.

Halfway through that perfect crossing, with over a thousand miles to land in any direction, a spot so isolated that few humans had ever paused at that unmarked liquid landmark, we stopped for a swim. As an avid watcher of nature documentaries, I have seen phenomenal film sequences on life in the open ocean, but most of that is filmed comparatively close to shore. Closer to shore I often lay belly down at the tip of the foredeck, my head hanging over the bow, watching dolphins hitch a ride on our wave, watching them soar out of the water and then rocket underneath, their enjoyment of the moment contagious.

But in the middle of the ocean, there is a lot of nothing. Occasional moments of wildlife action are flanked by days and days of nothing. So it was a shock when, minutes after climbing back on board from a mid-ocean dip, our boat was circled by grey whales. Our commotion in the water had piqued their curiosity, they being in the same mid-Atlantic void. Having no experience with whales, but knowing I would never be in that situation again, I jumped into the water.

What followed seemed surreal. My tiny legs fluttering to keep me afloat with 4,000 metres of water between me and the sea floor,I swam with whales. The mammoth animals were intrigued by those of us who had jumped in, and they swam under us, next to us and circled us, getting the best views they could, as we did the same. Just then an inquisitive eye the size of my head drifted towards me, arms-length from my face, peering into me, electrifying my body.

I followed one out as it departed for the final time, swimming as hard as I could in pursuit, not wanting the experience to end. Poking my head out of the water to catch my breath, I looked back at the boat, adrift in the distance, and then to the whale continuing away, its silhouette framed by the orange glow of the sun lowering on the horizon. There I was, a speck, alone and adrift in one of the remotest places on our planet. I swam back to the boat. 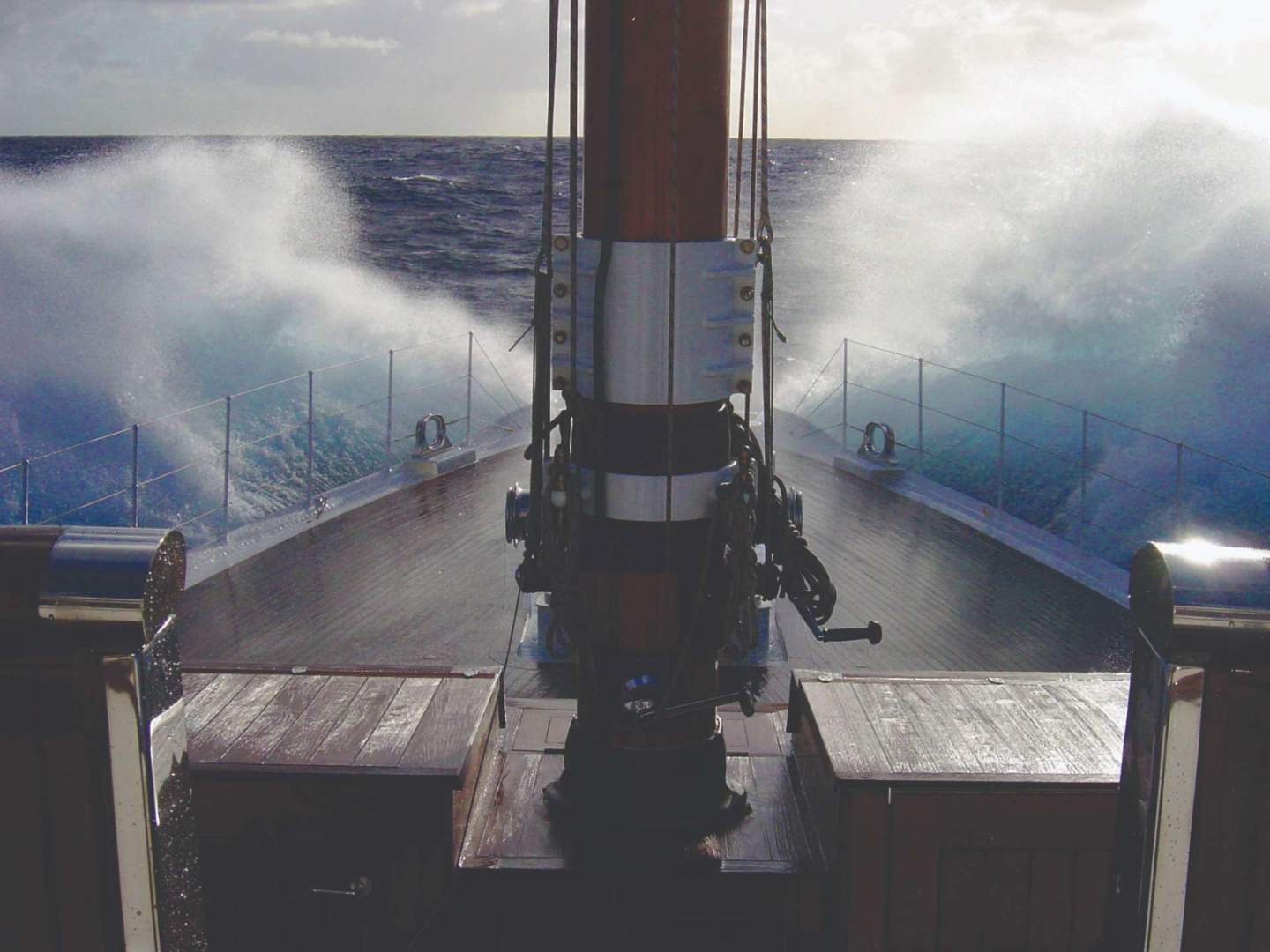 But that day seemed very distant the night I made my way to the bridge in my survival wear, and discovered that a storm we were trying to avoid had changed course and picked up speed. It was now Hurricane Peter, and we were in the thick of it. Much of the crew had gathered in the bridge. The captain steered his way into each massive wave. Over and over, we rode up a wave and then dropped off of its cliff, the front of the ship careening through the open air and back down to the sea, landing with such force that it sent shock waves vibrating through the hull, no one knowing if it would hold together. With each crash landing, the foredeck dove under the water, then bounced back to the surface, forcing tonnes of water up with it, the flying sea cocooning the bridge in a turbulent womb.

The noise was deafening. The howl of the wind and the crash of the water and the cries of the ship. Inside, no one could be heard without shouting. With each climb up an approaching wall of water, the aft deck was buried beneath the sea. With each fall off the other side, the fore deck went under. We took on water. Panels were ripped off the side of the boat; equipment was torn off the top deck.

We lost one of our two engines. The engineers worked frantically to get it going, knowing the loss of both would mean we could no longer steer into the waves, knowing a side hit would topple us, would be the end. They got that engine going just as the other was lost. The process was repeated throughout the long night.

In the end, my eeriest memory of the hurricane wasn’t the noise, or the pounding of the wind and the waves; it was the silence of the troughs. Nestled between the fleeting safety of two walls of water, the Earth’s rage was blocked and silence settled over the ship like a brittle blanket, offering a false escape from the storm. The ship did hold together. Battered, but still afloat, we made it out of there.

Crossing an ocean by sea on a super yacht is mostly a lot of monotony, a lot of blue, a lot of nothing. But then there is a whale’s eye peering into you, or a silent trough sending shivers down your spine. The eye and the silence stay with you. Routine punctuated by the awe-inspiring. Maybe that’s all any of it is. **

Hejsa Christensen is a Canadian adventurer and writer, with a Master of Fine Arts in Creative Writing at the University of British Columbia. In 2014, she won the Random House/Hazlitt Award in Creative Writing. This was her first story for Outpost.

Time to Meet Your Maker | My First Ultramarathon