Where the Wild Things Are (But Shouldn’t Be)

On some level, I knew Chiang Mai’s infamous “Tiger Temple”—where you can realize your Princess Jasmine fantasies of chumming up to a full-grown tiger—wasn’t ethical. But despite my disdain for regular zoos (“Born free, then caged,” as The Simpsons quipped), I was so eager for a picture with the creatures that I wrote off the guilt churning in my gut as dodgy pad Thai and went anyway. I even tried to believe they weren’t tranquilized—although if that were true, a conspicuous number of mauled backpackers would be staggering around Khao San Road.

Many developing nations whose economies rely on tourism go to great lengths to entice travellers, and close encounters with the furred kind are an almost guaranteed draw—particularly because such attractions aren’t allowed in most Western countries due to strict animal-cruelty and human-safety laws. It’s easy to be seduced by the prospect of an interaction with your favourite beast, and (as I’ve personally experienced) easier to lose perspective of what’s really going on. But, as I’ve written before, just because everybody else is doing it doesn’t make it right. 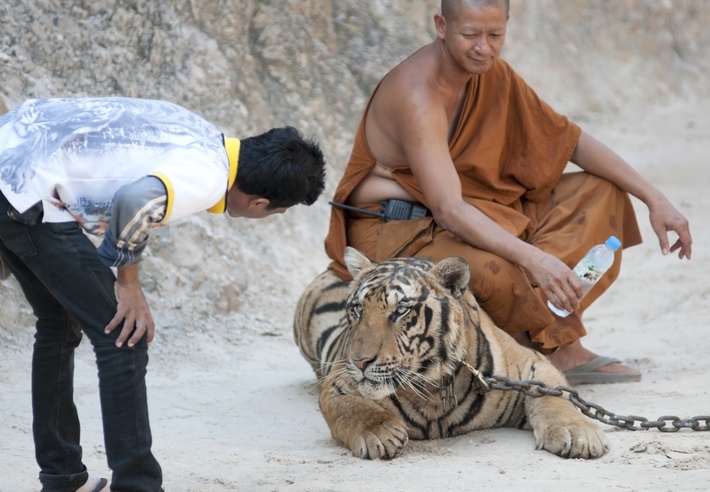 Thailand’s tiger temples are perhaps the most notorious example of animal exploitation in the name of tourism (the one in Kanchanaburi is currently under investigation after numerous news outlets reported 40 dead cubs found in their freezer), but they’re not the only ones.

Elephant camps throughout Southeast Asia are portrayed as sanctuaries where the animals bond with their mahouts to the point of being extensions of the trainers’ families. The conditions at each camp vary, as do the attractions offered to tourists—elephant bathing, elephant rides, elephant shows, etc. It’s true that many of the animals seem complacent, even happy—especially when playing in the water—but then again, what do backpackers know about the subtle signs of elephant emotion? After all, most people suffering from anxiety or depression would look complacent to their Starbucks baristas.

If undomesticated animals were meant to be held in captivity, it wouldn’t be called “captivity.” While some creatures, such as small- to medium-sized fish in aquariums, probably don’t have the brain capacity to feel imprisoned, it’s difficult to believe that more intelligent animals aren’t stressed out by living under human control. The argument that allowing individuals to see these animals in person builds understanding and compassion for nature is outdated; BBC’s documentary series “Planet Earth” and similar programs offer just as accessible a glimpse into the wild with less disturbance to the faunae.

Even if none of that convinces you, consider how much richer our own travel experience is when meeting these creatures in a more natural way. I remember at age 16 being stoked at the opportunity to splash around with dolphins on a family trip to Veradero, Cuba—but was quickly disgusted by the swampy brown water in which they lived. Three years later, I snorkelled near Kaikoura, New Zealand, in a bay where a dolphin pod was rumoured to hang out. Sure enough, the curious animals made an appearance, and it was even more thrilling knowing the animals found us freely.

The ideal scenario in which to see wild animals is in their natural habitat, preferably without them realizing you’re there. African safaris through game reserves such as the Okavango Delta and Etosha are usually respectful, giving the wildlife a wide berth—as those of us with crappy cameras can attest via our photo albums filled with blurry dots we insist are rhinos and lions. Scuba diving is likewise usually environmentally friendly as long as participants don’t get handsy.

The line can be challenging to place, particularly when you factor in breeding or protection programs geared toward increasing the wild animal population but reliant on tourist dollars. Here’s a goofy but effective way to test if your expedition is exploitive: imagine the roles reversed. How would you feel if, for example, a gazelle watched you shop for groceries from the far end of the aisle? What if a tiger locked you in a room, kept you drugged and invited other tigers in to hug you? It sounds ridiculous, but it’s a good personal barometer.

If you’re truly an animal lover, or even just an animal respecter, you’ll take their experience into consideration and perhaps forgo your own. Ultimately, listen to your gut—because that churning isn’t always the pad Thai.

Attention, Everyone: The Czech Republic No Longer Exists