Whitewater Botany | Searching for Rare Plants in the Canadian Arctic

Picking up where scientists left off 70 years ago, researchers head north to document the flora of the Soper River Valley, where little, yet nearly everything we know about plant collection is changing.

Story and Photos by Paul Sokoloff

I look over at my boss, Jeff (Lynn, the other one, is glued to the window on the emergency exit), who is wedged in next to me in the Twin Otter airplane. He quickly smiles, but the death grip on the seat isn’t fooling me. Fortunately, the flight is short. Not 30 minutes after departing Iqaluit, our four-member team—our colleague Roger rounding us out—is standing on the gravel airstrip in the shadow of Mount Joy, the put-in for Nunavut’s Soper Heritage River.

This is Katannilik Territorial Park. Bisecting the Meta Incognita Peninsula of southern Baffin Island, this sheltered region attracts hikers, paddlers, snowmobilers and hunters from Iqaluit to the north, the town of Kimmirut to the south, and travellers from around the world.

It is also what we eventually termed the accessible Arctic; after previous field seasons on Victoria Island in the Northwest Territories, a three-hour flight from Ottawa seems strangely short. Sure enough, during the next 24 days out on the tundra, we ran into hikers and a senior’s paddling tour. While these parties were trekking through the park at the fastest pace they could sustain, our mission dictated a more leisurely pace.

The four of us, all botanists with the Canadian Museum of Nature in Ottawa, had come to the Soper River to collect each and every species of plant that occurs in its valley.

Amazingly, despite the convenient location of the park, this is the first time any serious plant collecting has occurred here since Dewey Soper himself paddled up the river from Kimmirut in 1931. 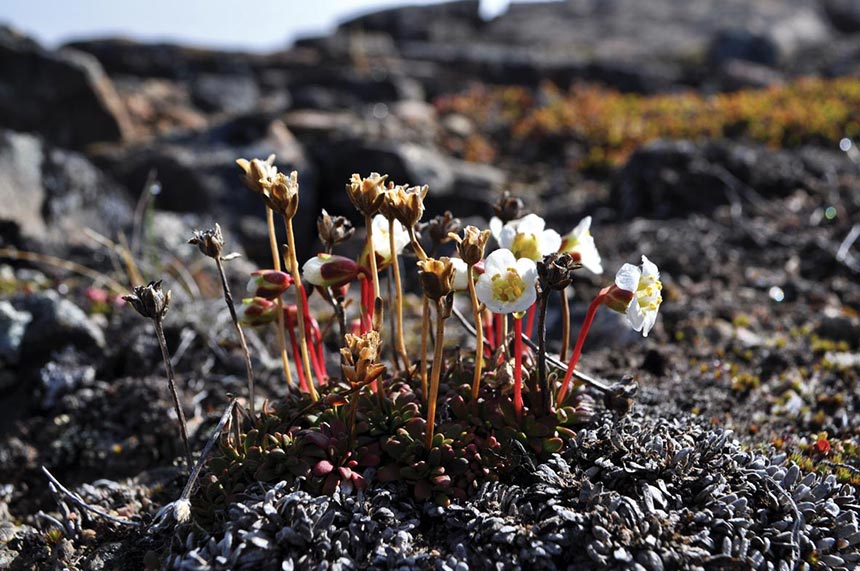 A collected sample of Diapensia-lapponica.

From our home base, the National Herbarium of Canada, we are continuing a tradition of Arctic botany at the museum dating back nearly a hundred years. Early polar explorers, such as John Franklin (yes—that Franklin!), collected many of the earliest Arctic plant specimens in Canada. Over the years, many of these collections have been acquired by the herbarium (a large library of dried plant specimens). Later, botanists like Soper and our own Alf Erling Porsild (hired in 1936 as the museum’s chief botanist) expanded the collection through their adventures across the North.

Over the past four years, our current research team has picked plants to support what I call our big work: an Arctic Flora of Canada and Alaska. The finished product will be a book describing all North American plant life above the treeline, and while our predecessors have written high quality works that we still use today, this will be the first volume with a continent-wide scope. The only way to know what plants occur across the continent is to get boots on the ground and collect, collect, collect!

Simultaneously, very little and yet nearly everything about the way we collect plants has changed from the days of those early explorers.

We still preserve plants by smashing them between cardboards in a plant press, using airflow and pressure to dry them into two-dimensionality.

But preserving sub-samples of these plants in silica gel for future DNA analyses—well, that’s not something Porsild would have done. We still record where and when these specimens were collected to appropriately label the sample for the herbarium, but a GPS now makes this process much more accurate. And we still deposit these specimens into the same herbarium as Porsild and Soper did, though they would no doubt be impressed with the ability to browse these plant collections online. One important detail remains unchanged, though: like Soper in the 1930s, we are paddling the river to take us to the plants we want to collect.

“Man, pressing in the dark sucks!” Jeff complains. It’s just before midnight on our last day at Mount Joy. After three days hiking in the region around the airstrip and collecting everything in sight, we had decided to strike camp first thing the next morning and move to the park’s group shelter 12 kilometres downstream. The plants we collected the day before would wilt and become crushed in a dry bag, so we decide to stay up late to get them into a plant press for transport. 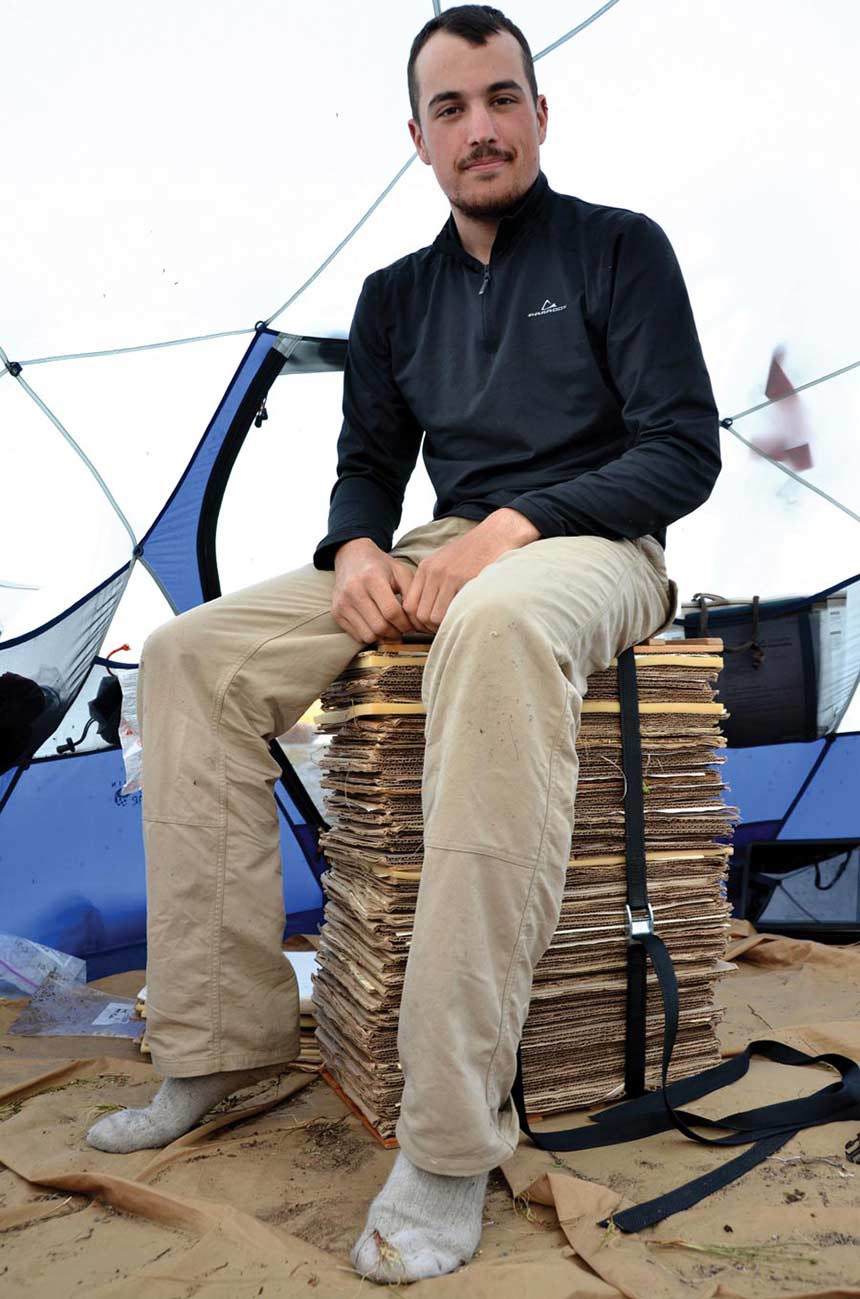 Plants are still preserved by smashing them between cardboards in a plant press, so Paul sits atop a pile in the expedition’s processing tent.

Like I was saying, the Arctic is remote. For those of us lucky enough to work there, the cost of the trip means we have a responsibility to fit in all the collecting and surveying that we possibly can. This, of course, leads to some long hard days, and the fatigue leads to some generally strange interactions with your colleagues. We call this field brain. At one point, I declared myself king of the land of beans (the legume family is my specialty), and wore a crown of plants around camp. (Not too sure where those photos made off to.)

Regardless of our around-camp mental state, we were all business on the river.

All four of us are avid paddlers with varying degrees of experience, so navigating the Class 2 rapids on the Soper provided us with a big old reset button on our work days—think a weekend packed into a few awesome minutes. Paddling turned out to be the best way to get around; for the price of a single hour of helicopter time, we rented three inflatable canoes for a month, a more environmentally-sound alternative.

Our outfitter, Louis-Philippe, constructed a homemade plywood gear platform to catamaran two of the boats together, and our vessel—which we christened the Dewey Soper—handled beautifully on the whitewater. Our pre-trip whitewater training, along with the experience of our sterners Roger and Lynn, meant that while we might get sprayed riding a standing wave, our gear, our samples and ourselves were never at risk of loss.

So we settled into an arduous and slightly wacky routine. Wake up early, eat and caffeinate, strike camp (sometimes involving a half-kilometre portage with a thousand pounds of gear!) and paddle. Fun days meant the stretches of paddling were punctuated by rapids to negotiate. Less fun days (without rapids) saw the four of us climb into the Dewey and paddle in companionable silence, watching each other to match up our strokes. 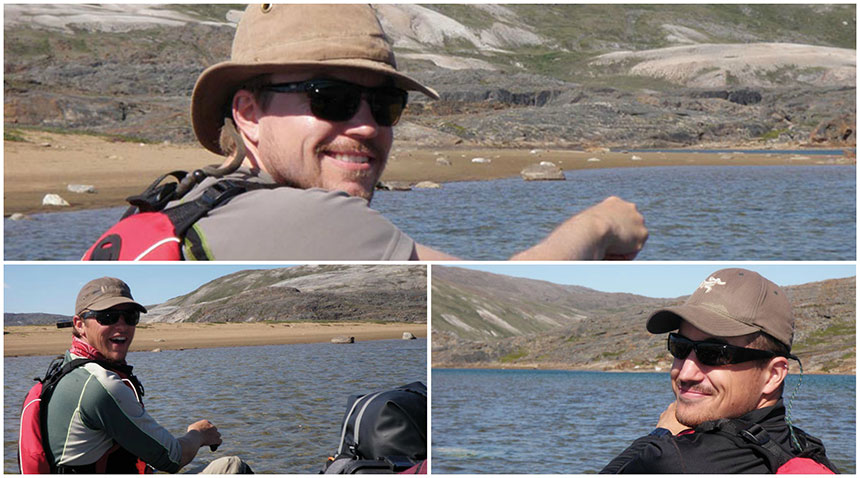 Most of these days were spent entirely on the river; but if we find a new plant, say while on a bathroom break or scouting for a campsite, well, we find a new plant. Trust me, there’s nothing more frustrating than spending all day paddling in the rain, your feet cold and wet, and then finding a new species to document when all you want to do is dry off and pitch your tent. Lunch was normally around 4:00 p.m.; dinner was usually at midnight after we set up camp. A well-deserved sleep-in only really happened if it was gray and rainy; otherwise, the heat from the sun drove us from our tents early.

Our relief from paddling was hiking; working our legs instead of our arms. When we’d collected all the plant species in camp, these hikes led us to some very intriguing habitats populated by equally intriguing plants. Of course, when you spend much of a trek looking at the plants around your feet, your progress is measured in stops and starts. Still, on an average good day, we would cover more than 10 kilometres. We trekked to the tops of waterfalls, to crevasses Lynn was worried no one would ever find us in if we tumbled, and (on a high note) eventually to the fertile and overgrown Kimmirut town dump. Returning to camp after a successful hike usually meant most of the next day was spent pressing plants and recording data in our work tent. After a couple of days collecting, we’d move downstream and start the cycle again.

Sustaining us through this scientific migration were the excellent dehydrated meals Roger had cooked before leaving Ottawa. Obscene portions of pasta, minestrone stew, chicken tikka masala and even chocolate cake kept us fuelled and moving, even as some of us shed a few pounds. If we got lucky and our occasional moments of downtime coincided with a sunny day, it was either time to take a bath, or throw on a lifejacket and ride the wave train down a rapid. 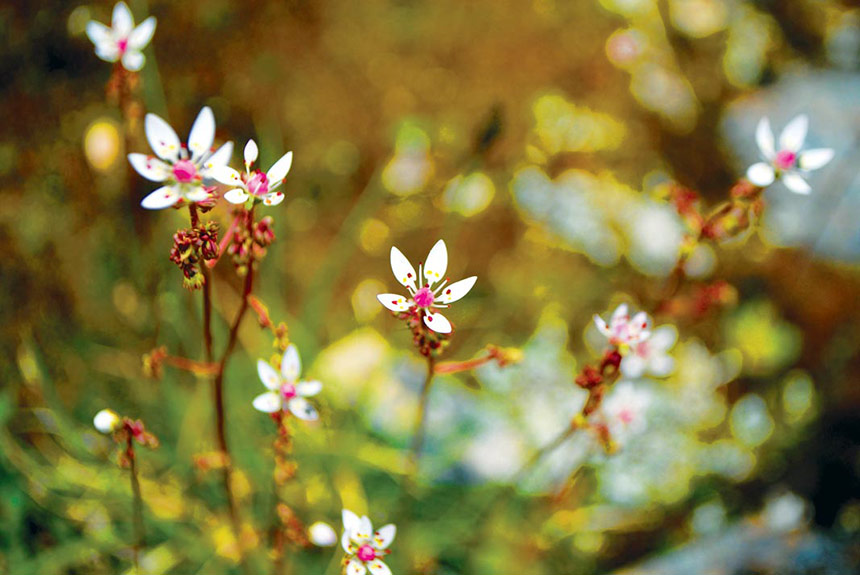 A collected sample of Micranthes-Foliolosa.

The fruits of our labour (lame pun completely intended) are the 900 unique plant collections that will be added to the herbarium. Our samples ranged from the common, like Kentucky bluegrass (Poa pratensis), to the rare and previously unknown species from the area: the northern bog orchid (Platanthera obtusata), and bog rosemary (Andromeda polifolia) are notable examples.

These collections, and the publications that will ensue, will be our lasting legacy from the trip. For me though, every time I’ll work with these specimens in the herbarium, or consult our field notes, I’ll think of rafting and adventure in the Arctic oasis that is the Soper River Valley. *

Born in St. John's, Newfoundland, Paul's nomadic upbringing inspired a love of adventure and a curiosity about the planet, which led to stints in Indonesia, Vietnam, northern B.C., central Alberta and rural Nova Scotia.

The Morals and Ethics of Travel