Who Knew the Trekking in Liechtenstein was So Good?

From verdant valleys to hilltop restaurants: when a country is in the heart of Europe and trekkable, tip to toe!

Who knew the trekking in Liechtenstein was so good? Ironic, since you can literally walk around the entire country. It’s the only country in Europe named after the family who owned and rules it. With an area of just 160 square kilometres (62 square miles) it’s also the sixth-smallest country in the world, but it has the third-highest GDP per person, thanks to its status as a financial centre.

It is also the largest producer of false teeth in the world. Welcome to the Principality of Liechtenstein. 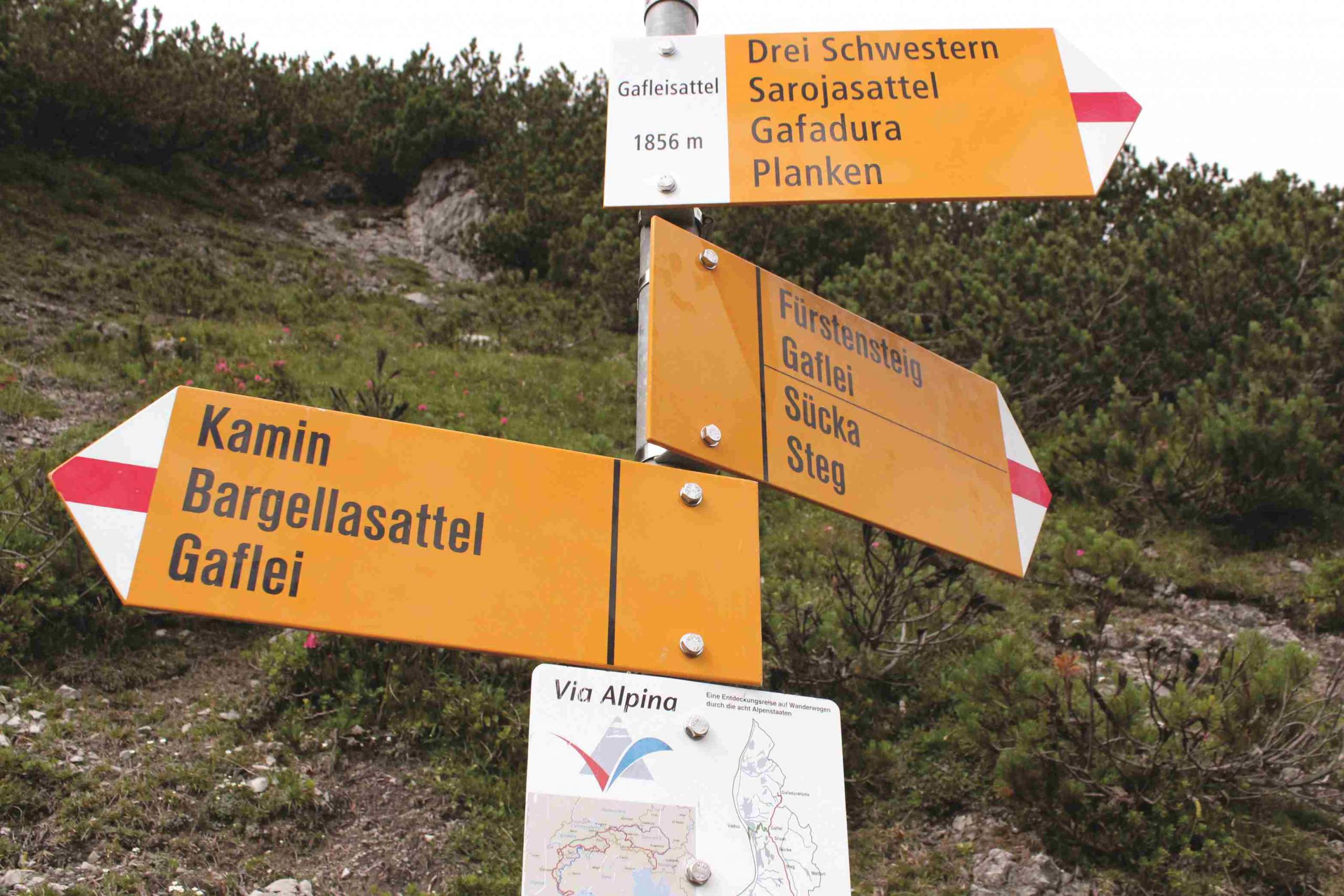 This is a strange high-altitude place, landlocked in the Alps between Switzerland and Austria. The sort of geographical anomaly that people pop into for an hour just to get a stamp and say they’ve been there. But this was my second visit to the Principality. I had unfinished business with the surrounding peaks.

You see, back in 2008, I had coached a fitness seminar with colleagues in a neighbouring region of Switzerland and we had scheduled a free day to do some hiking. I was handling the logistics, and I chose to make a detour to Liechtenstein for the same reason so many others do—I wanted to check off a weird place on my map. 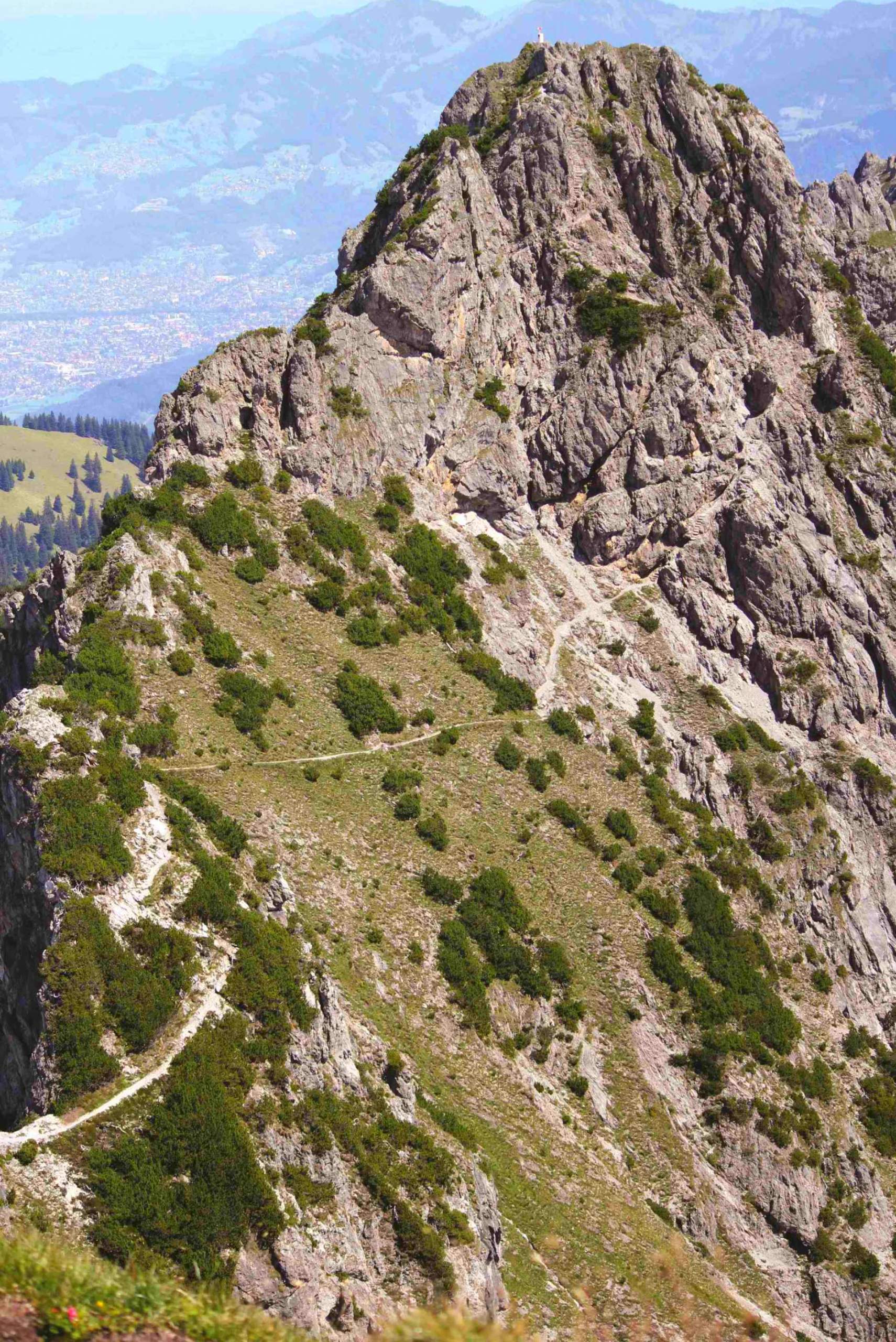 Trails wind through the Alps in Liechtenstein.

But I also wanted to hike a trail called The Fürstensteig, by reputation the most extreme trek the region has to offer. Who in their right mind wouldn’t be attracted to a thin path clinging to the edge of a massive rock face that drops all the way to Switzerland? 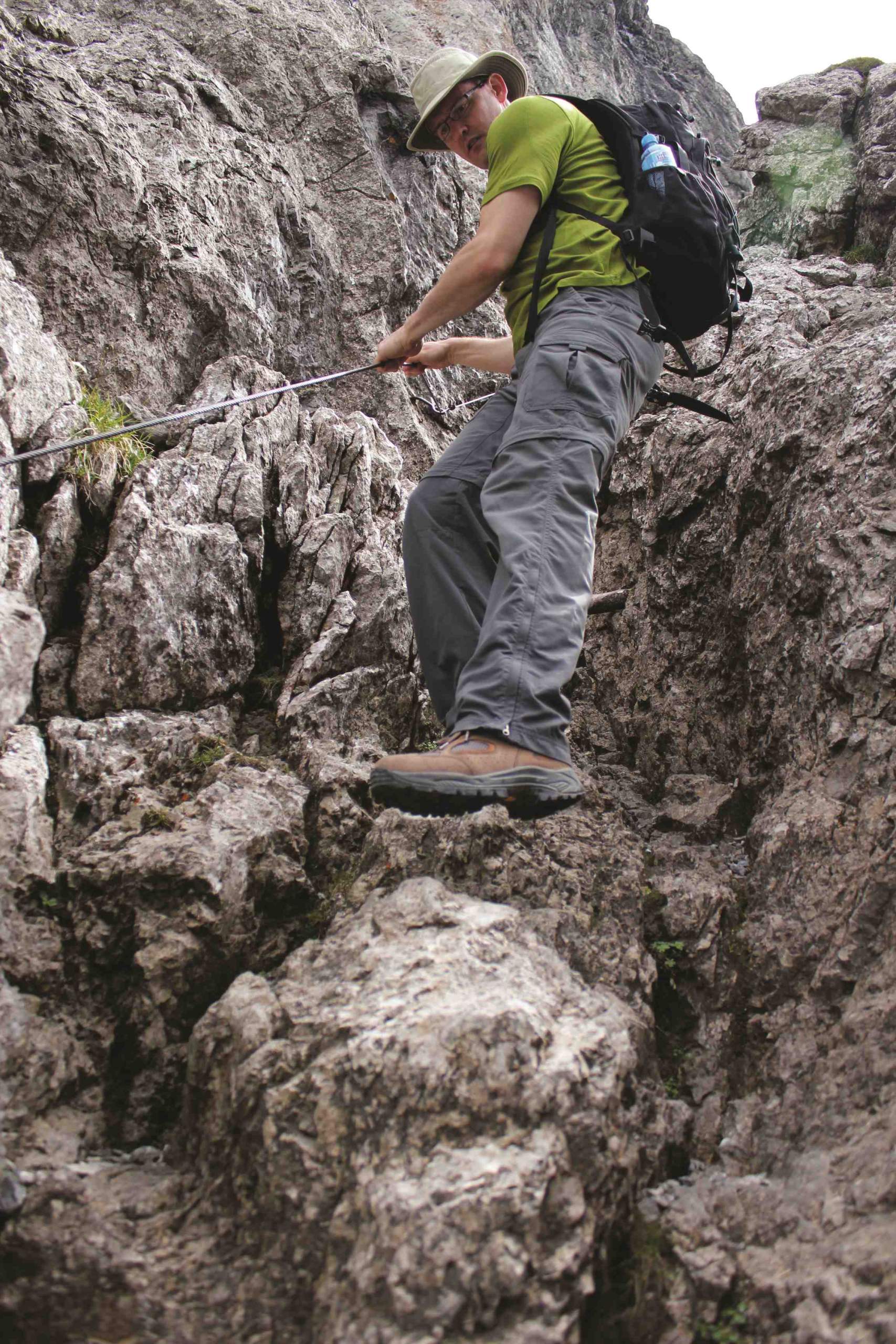 This hike would be the highlight of the entire European seminar tour for me, but it got off to a rough start. After a day beset by missed trains, tardy buses and general messing about on the part of my companions, we finally arrived at the trailhead.

The bus stop at Gaflei is listed as a hamlet, but they must have hidden the houses because all we found at the end of the line was an empty parking lot and a few rubbish bins. That, and an incredible view of the Rhine and the Swiss Alps from 1,485 metres.

The trail was well marked and we were already short on time, so I grabbed my pack and led the way. After a brief walk through the forest on a gentle upward slope, the trees abruptly ended, the path grew narrow, and the land on my left dropped away in a rock face that scarred the entire side of the mountain. 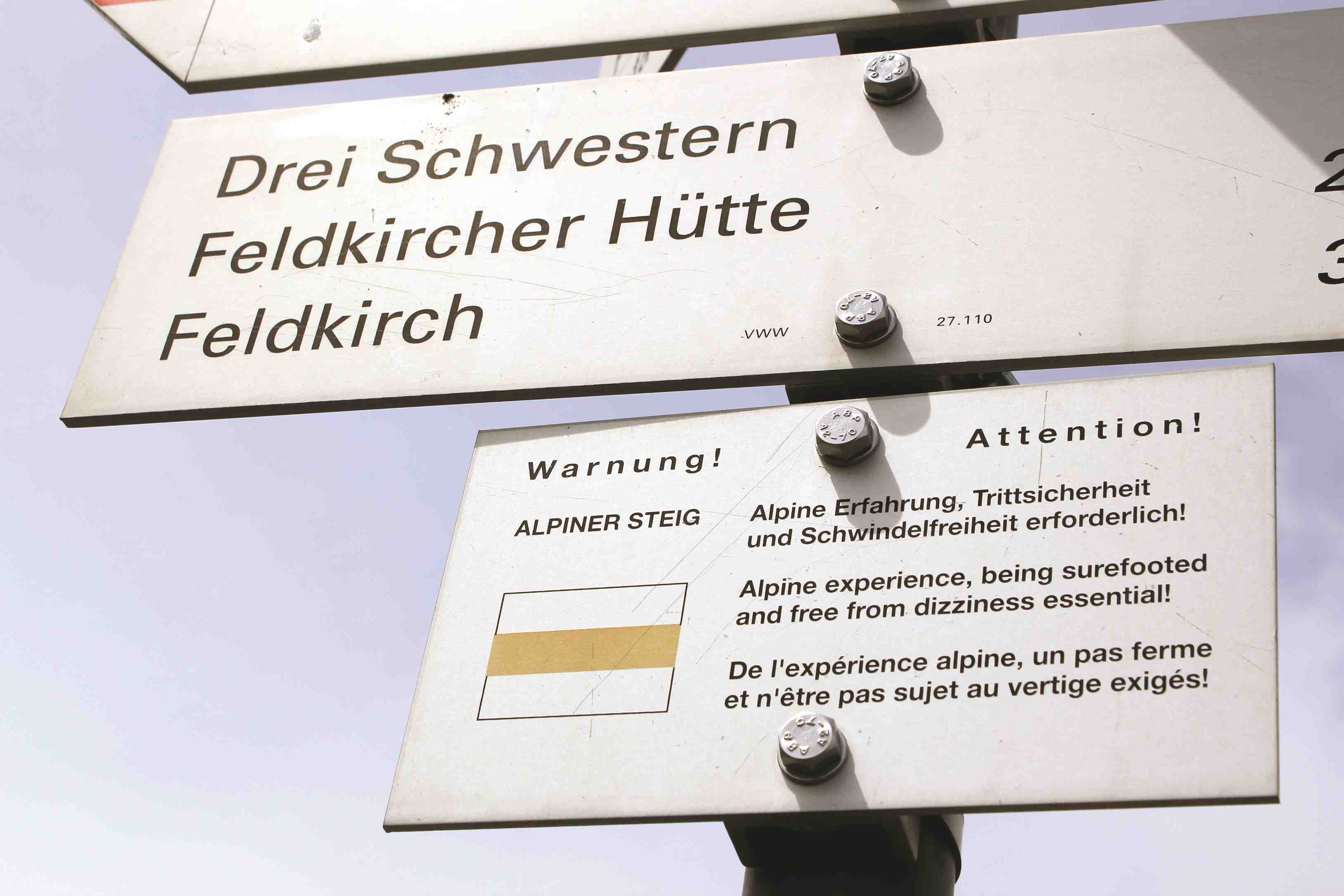 My steps grew lighter, my lungs swelled with cool mountain air, and I felt that sense of freedom that only the sound of gravel under my boots is capable of creating. It was exactly what I’d been anticipating for so many weeks.

When I looked back to share a smile with my friends—who I was certain would be feeling as euphoric as I was—no one was there. I hadn’t heard any screams, so they couldn’t possibly have plunged over the side.

And no one but a lame tortoise could be that slow. And so I backtracked around the corner to search them out. They were right at the edge of the forest, where the true trail began. Scott was clinging to a boulder with his head pressed against it and his eyes squeezed shut. His knuckles were white and he’d just begun to hyperventilate. Our other companion was trying to calm him down, but without much success. 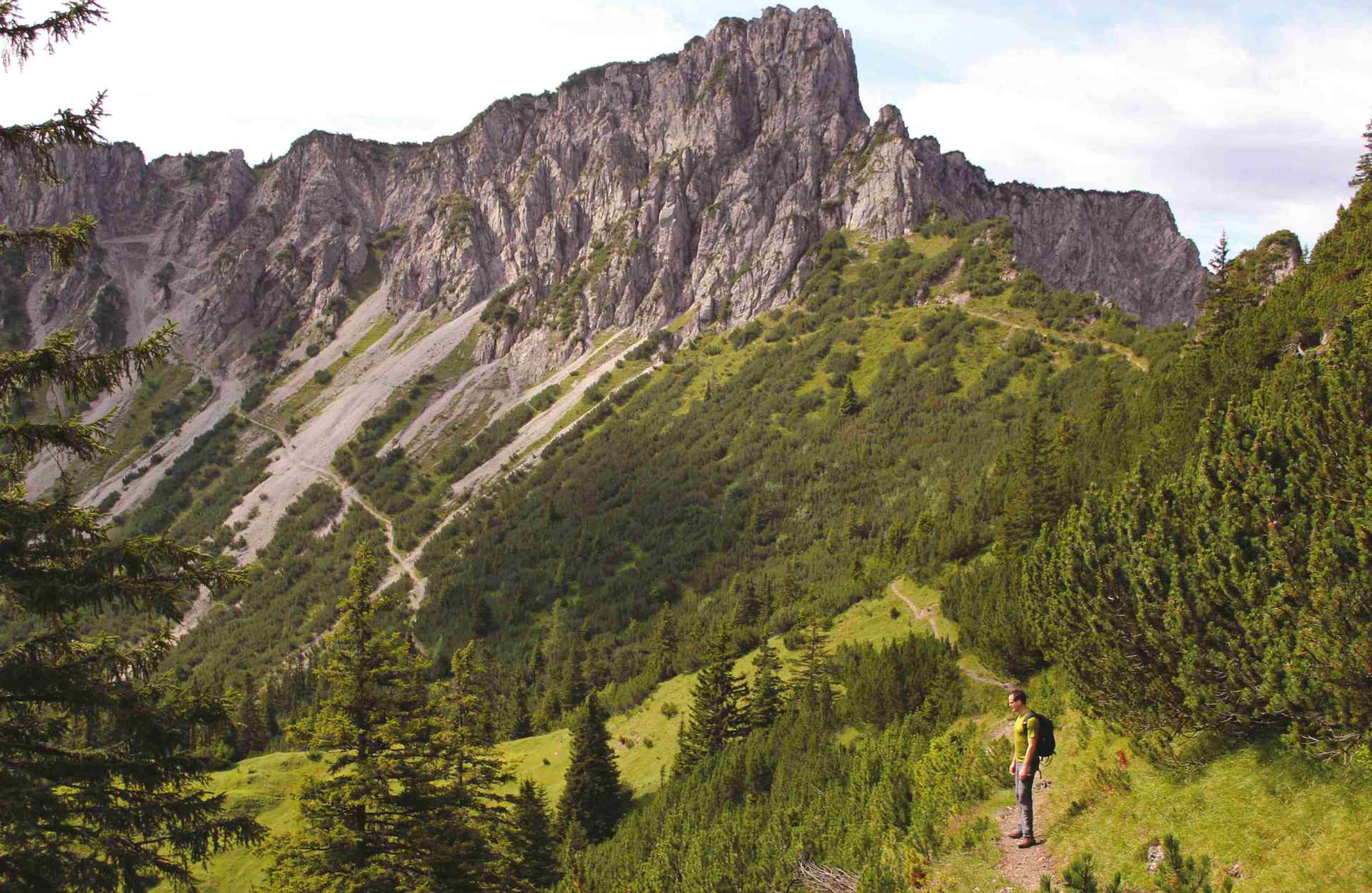 Stopping for the view, with green valleys everywhere.

I felt my hopes collapse and sink into the pit of my stomach. I knew my ambitions to hike The Fürstensteig—or to walk anywhere at all on this trip—were thwarted. And so we led Scott back into the forest, where he quickly regained his composure. And when his shivering had stopped and his breathing had normalized, we trudged back down to the parking lot in defeat.

As the little yellow Liechtenstein Bus pulled away and corkscrewed down to the Swiss border, I stared out the window at the rapidly retreating rock face, and I made a solemn vow to return.

I thought about that trail often as the years passed. And when my wife Tomoko and I moved to Europe, I insisted that our first weekend off would be dedicated to revisiting this strange little country and hiking its peaks. 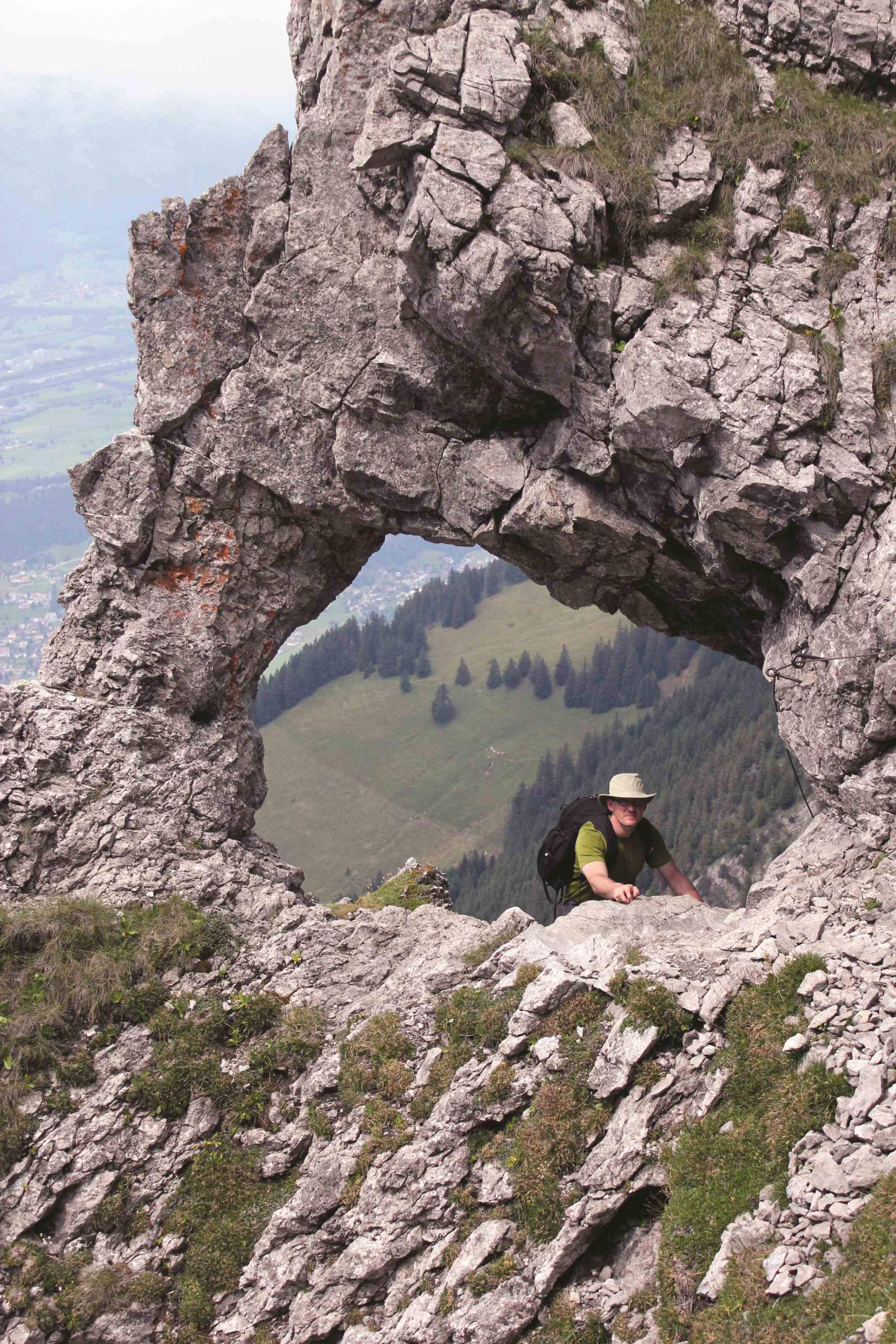 Ryan looks to Tomoko with camera while scaling the mountainside.

We took the direct flight from Malta to Zurich, and crossed the country by train, until we reached the small border town of Buchs on the Swiss side of the Rhine. I could already see the massive scarred rock face from the far side of the valley, and the brooding form of Vaduz Castle, with its whitewashed stone walls and pointed red roofs, overlooking the capital from high on a rocky crag.

We arrived in Vaduz in the evening, when Liechtenstein feels a lot like a zombie film. Now, don’t get me wrong. This place is the polar opposite of a rundown ghost-town shambles. Everything is incredibly neat, tidy and organized. It’s just that there are no people. Seriously. Zero. And when you do finally see someone in the distance, no one shouts or waves. Instead, they walk over and speak in low voices. The entire country oozes a level of discretion and good manners that make even the bird calls sound politely muted. 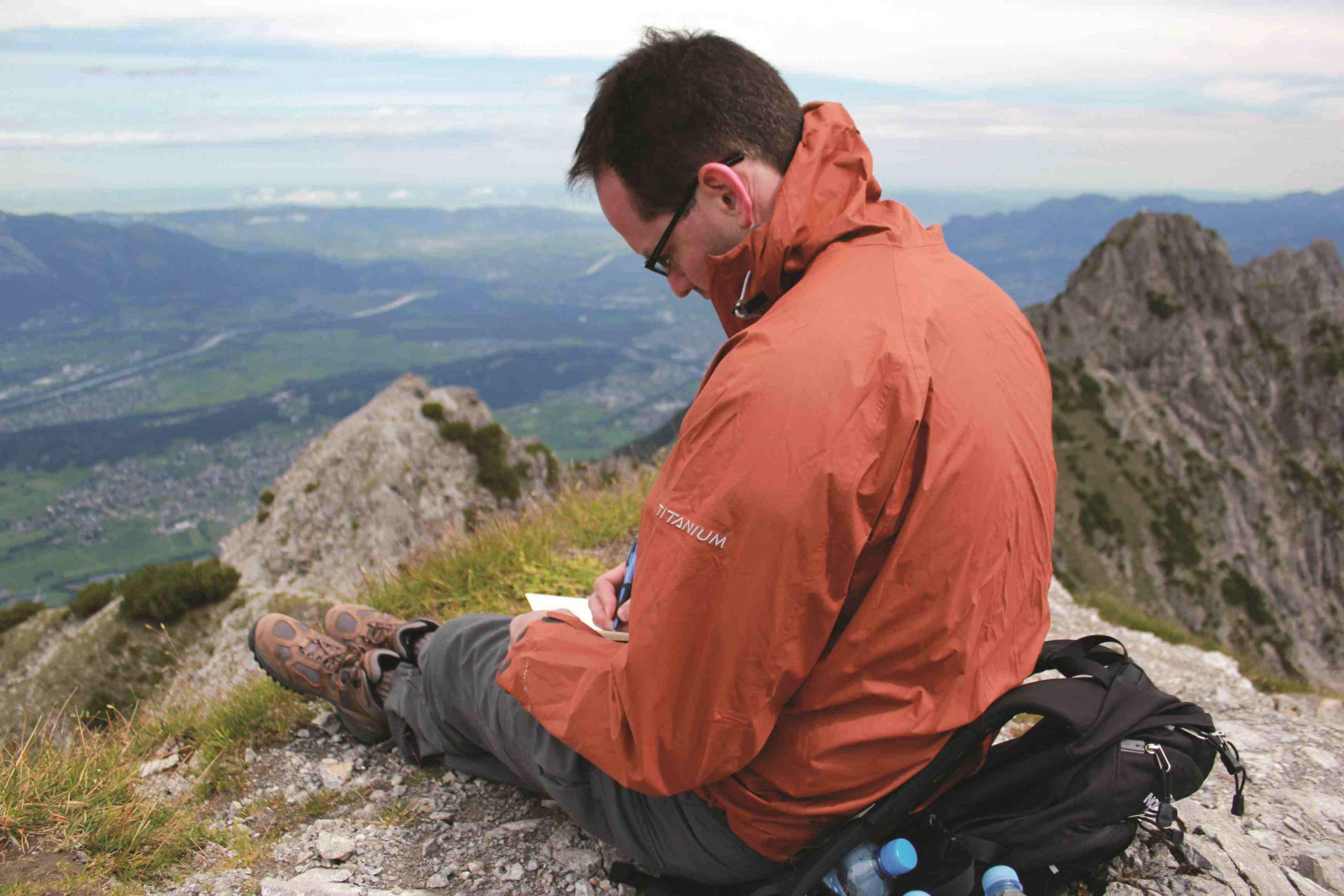 Stopping to “record” the view.

That national silence is partially responsible for the tiny principality’s financial success. But Liechtenstein doesn’t just rely on low corporate tax rates and investment structures for its daily crust of bread. It is a large producer of ceramics, including false teeth of all things, as I’ve already mentioned. It also manufactures precision instruments, pharmaceuticals, as well as high-end power tools and fastening systems at Hilti, the largest employer.

But none of that was of interest to us. All of my natural teeth are intact, and unfortunately I don’t have any money to invest. We came for the hiking, and we were not disappointed. 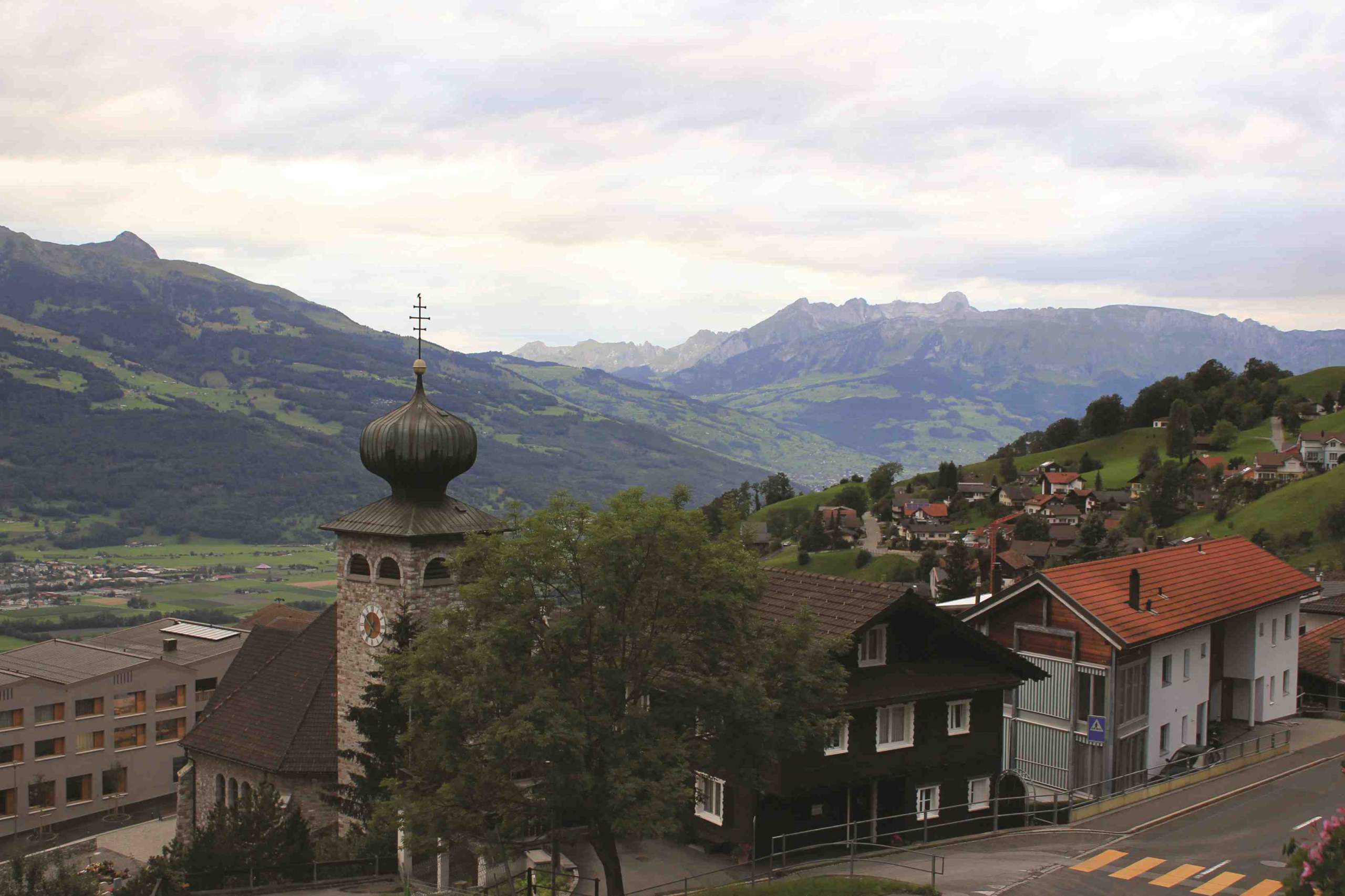 The weather was excellent on that first day, and we spent 10 hours climbing and walking in the rarefied air. We began at the bus stop of Gaflei, just as I had tried to do several years before. And we were immediately rewarded by dizzying views of the Rhine and Switzerland along the treacherous Fürstensteig.

We clipped lightly across a rock face whose narrow trail was supported by the occasional log bridge over washed-out sections, and by handholds in the form of bolted-on cables. I wouldn’t want to cross that exposed wall in nasty weather, but on a sunny day this precipitous section of the trail ended up being two of the best hours I’ve ever spent in boots.

It was with some slight sense of regret that we rounded the Fürstensteig’s last corner, but new vistas and passes were opening out before us, and we were just getting started. 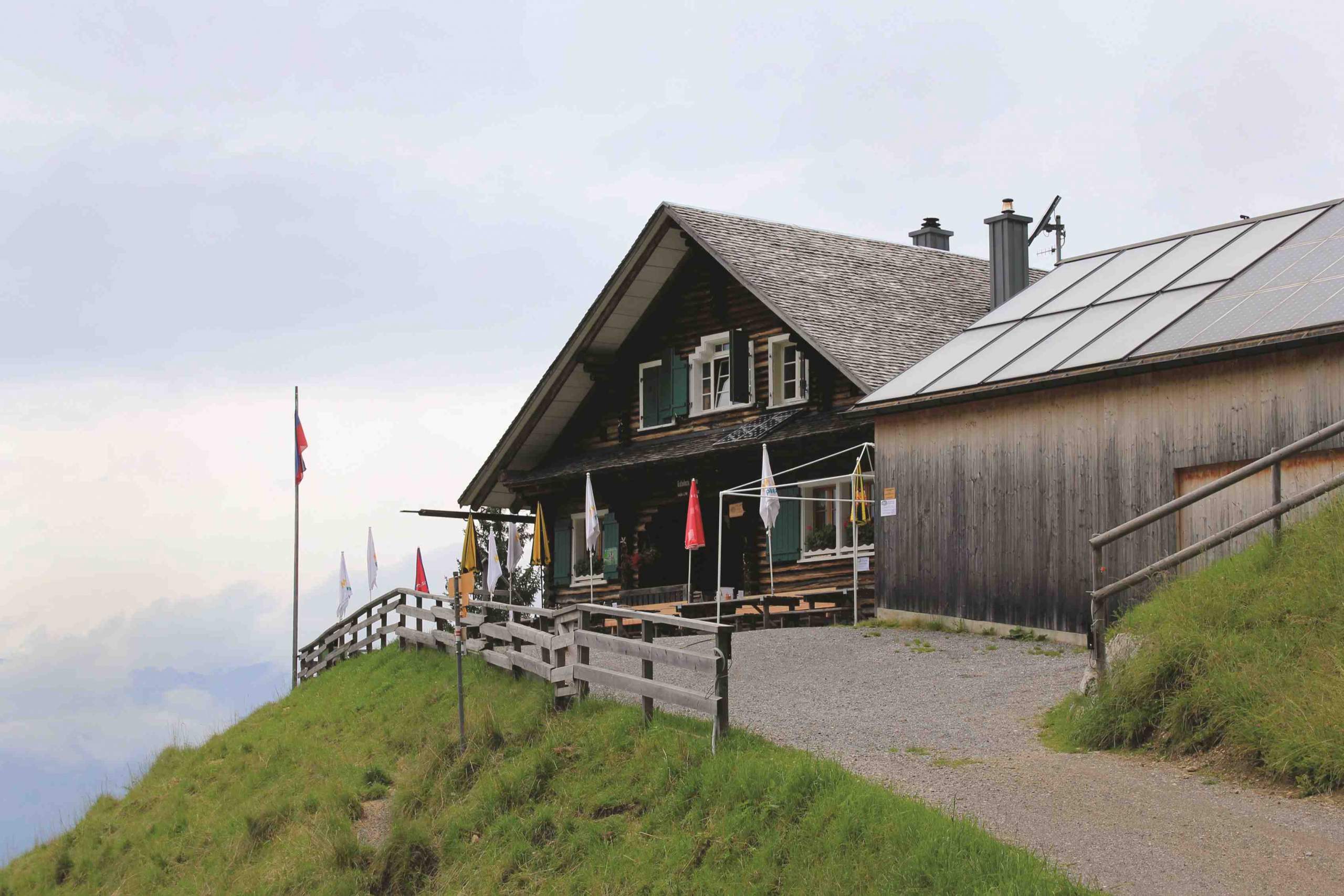 We continued north, threading our way along a rocky spine, with views of the Alps in staggered row upon row, vanishing into an Austrian distance. Far below us, a hidden valley cradled a little cabin that sat all alone on the slope of an alpine meadow. I thought of Jack Kerouac and his stint as a fire lookout atop a lonely Cascade Mountains’ peak, recounted in his book Desolation Angels.

What would it be like to spend a season down there? The memory of that cabin stayed in my mind long after we left the valley behind and started climbing again.

The trail finally led us up steeper and steeper rock faces, until we were clinging to lengths of cable which had been bolted to the mountain, hauling ourselves up hand over hand to the peak of Garsellikopf. That last section made the sheer rock face of the Fürstensteig look like a gentle stroll. But the views… the views. 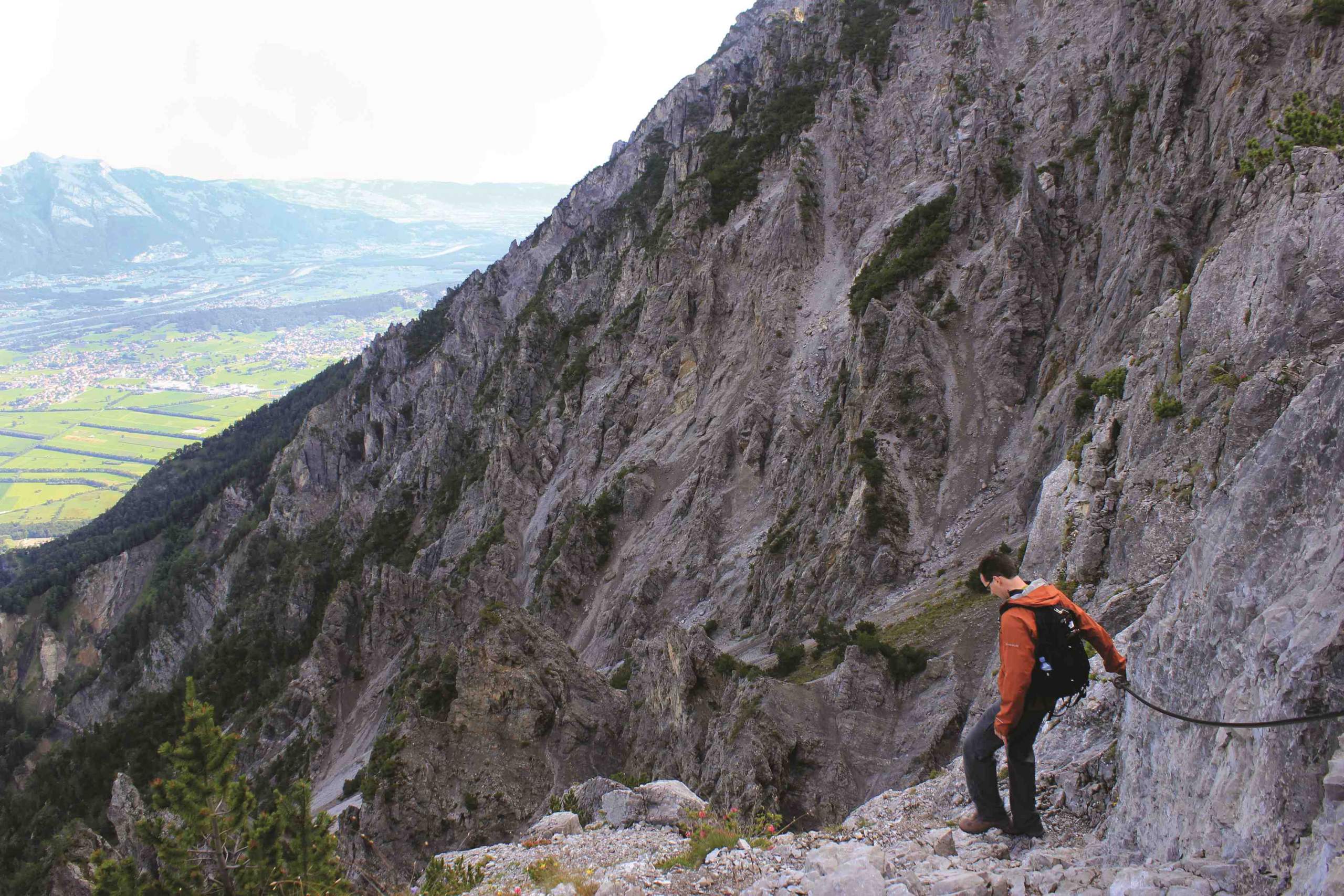 As Tomoko snapped photo after photo, I sat with my back against the stone which marked Garsellikopf’s 2,105-metre elevation. I unfolded my map and did my best to shelter it from the wind as I scanned the horizon, putting names to mountains and villages that had taken on the distant look of an aerial photograph. I could see nearly all of Liechtenstein from there, and vast stretches of Swiss meadows and Austrian mountains, and the river Rhine that marks the Swiss-Liechtenstein border. To the north, the shine of Lake Constance marked the transition to Germany. 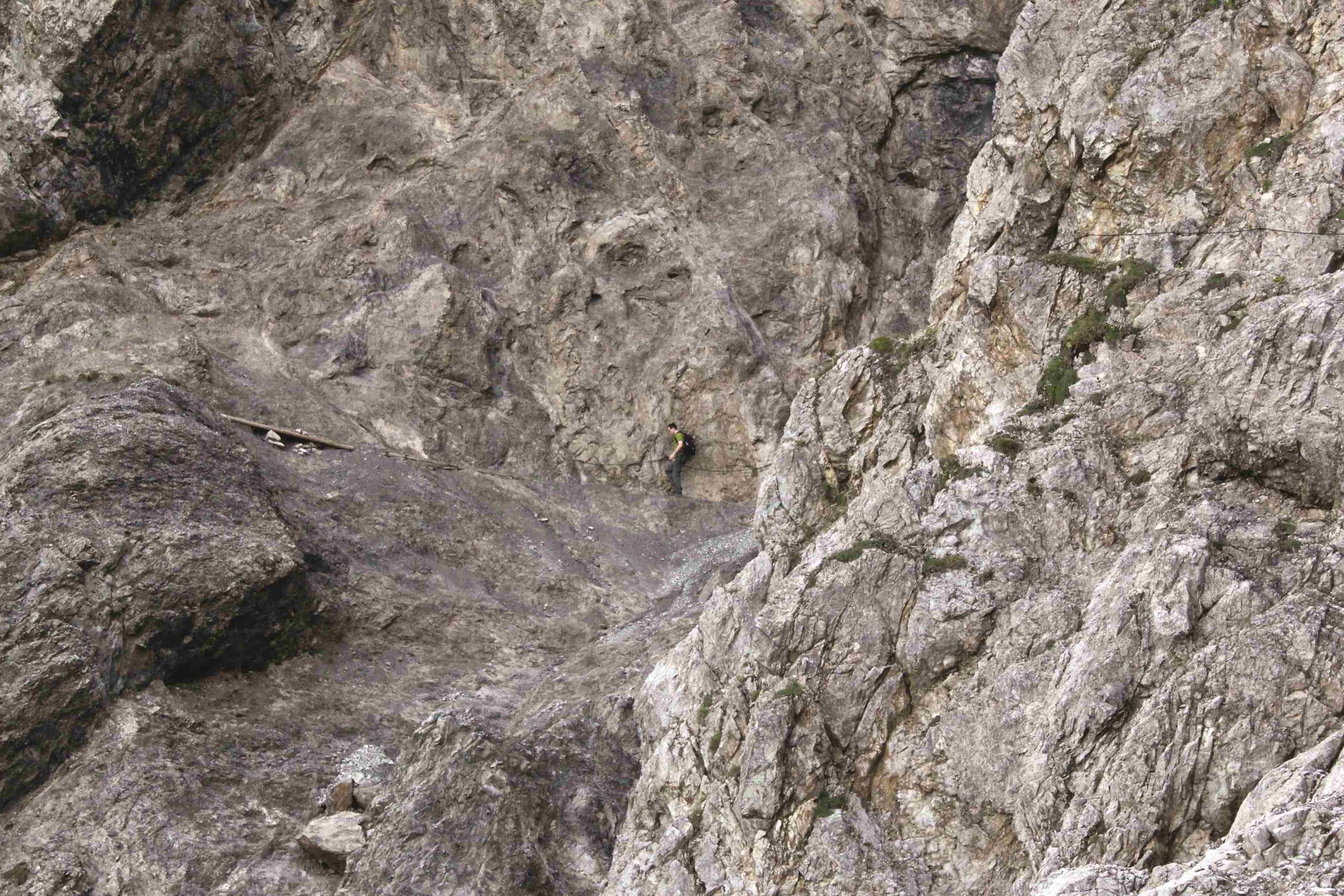 The author, with Tomoko taking the photo at higher elevation.

We ate what remained of our packed lunch there on the peak, and I crumpled the waxed paper into a ball and stuffed it in my pocket. It was time to move on. When we reached the summit of the Drei Schwestern (the Three Sisters), the daylight showed the first signs of fading. As we descended those last two hours down to the village of Planken a gentle rain began to fall, filtered through forest and moss, casting a green light of undersea on our silent world. It had been a long and thoroughly wonderful day. 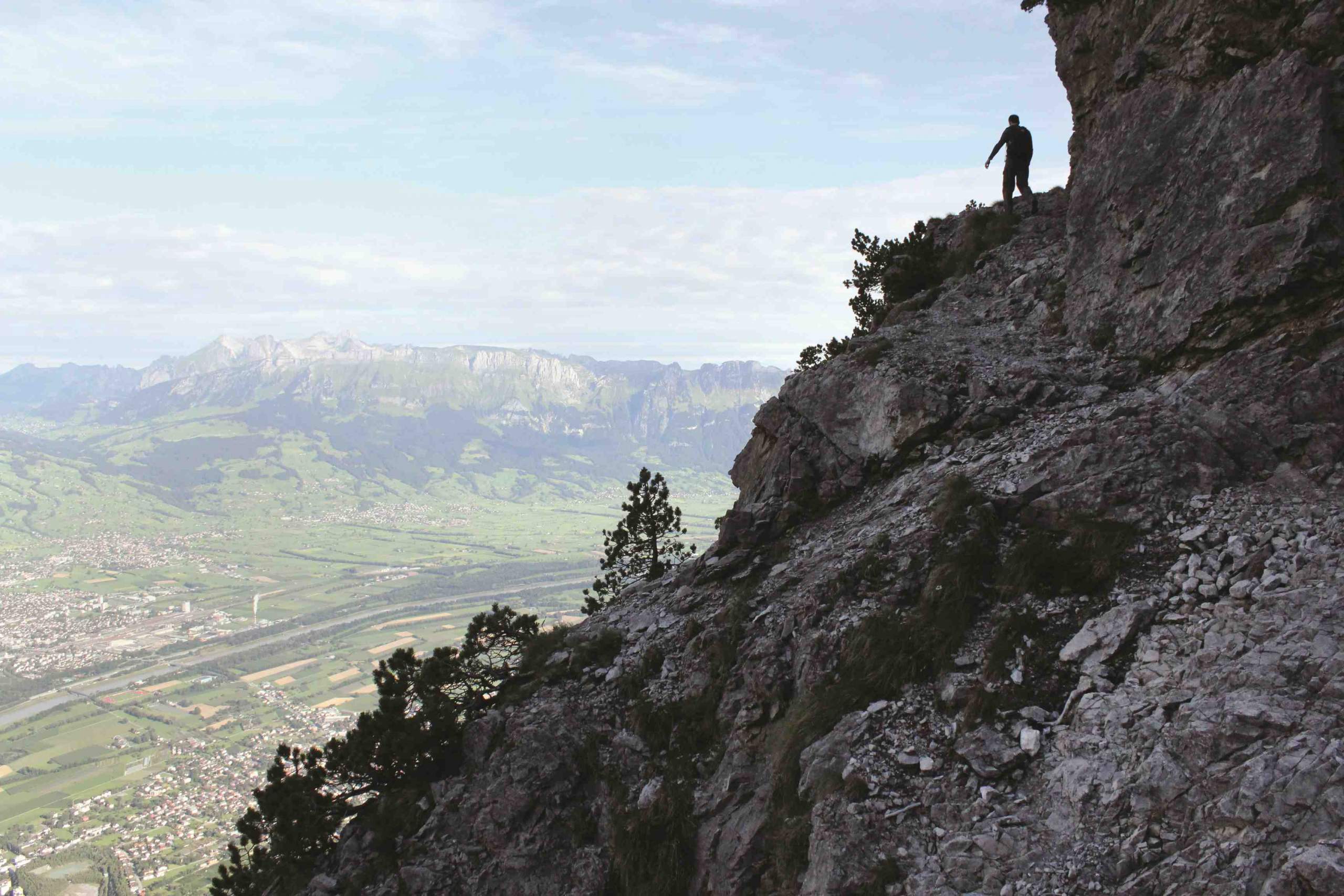 Almost at the top.

Back at our hotel in Triesenberg, I could barely lift my legs up the stairs. I piled my sodden hiking clothes in the corner and took a scalding hot shower. I revived briefly as I felt the sweat and trail grime stream down the drain, but as we made our way to the dining room, I was clinging to the bannister like a man whose legs had become disconnected from his piloting mechanism and were seeking independent destinations of their own. 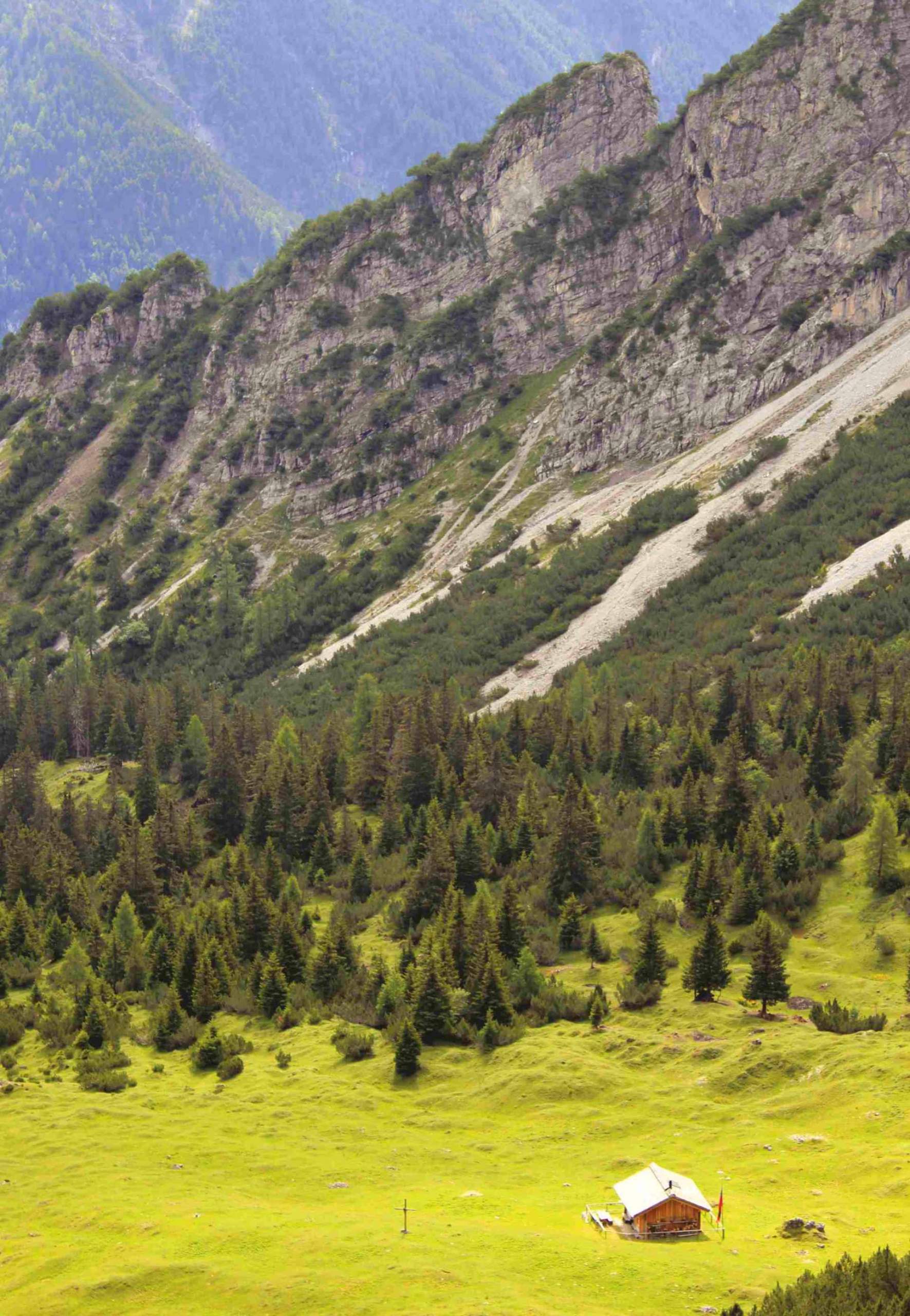 Another pit-stop, this time in valley-central.

The cuisine of Liechtenstein is firmly Germanic in origin, and at that point, nothing could taste better than a plate of mashed potatoes and a big hunk of roast lamb. We washed it down with a spicy local red wine made from the Blaufränkisch grape, as we recounted the perils and triumphs of our struggles on the mountains. 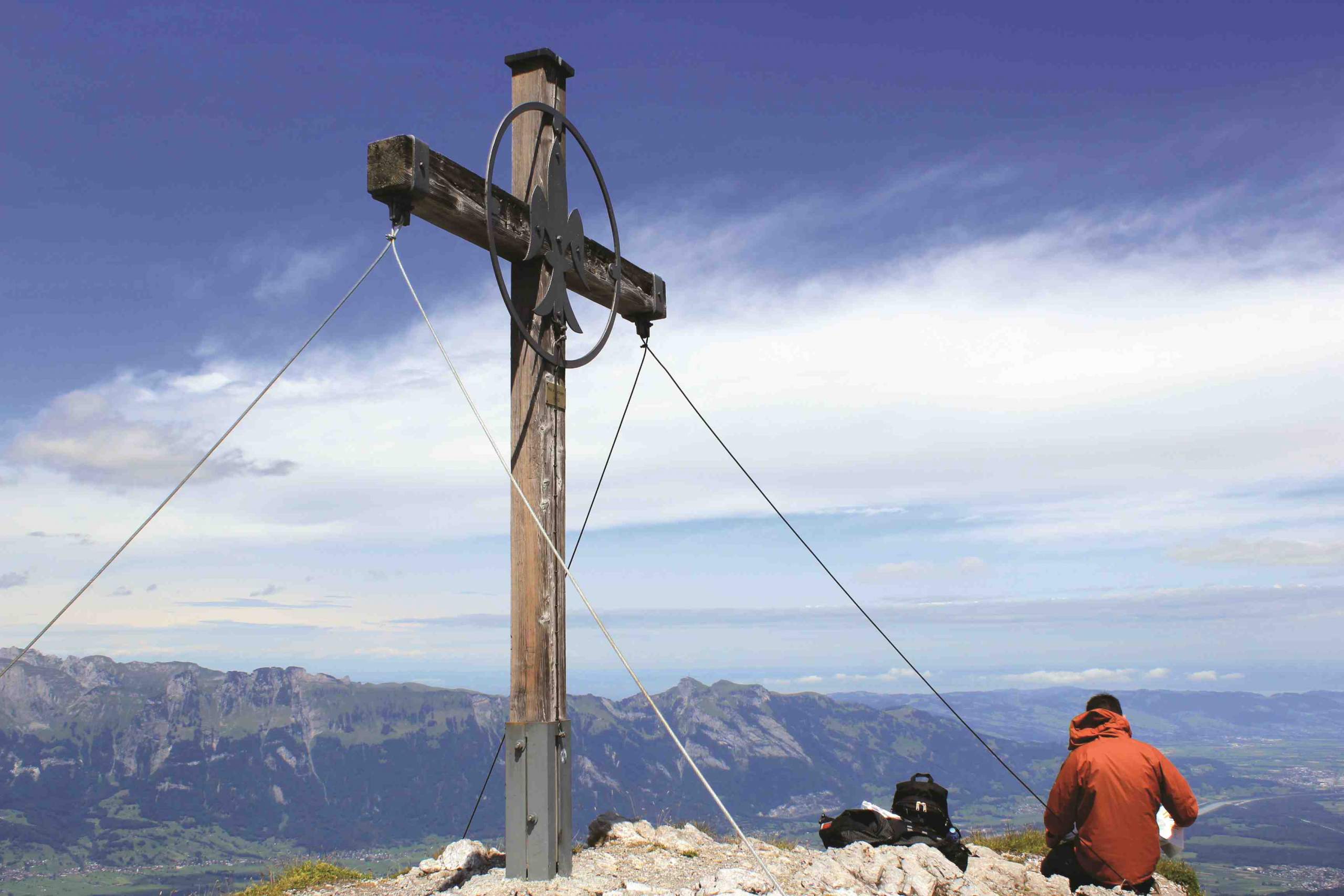 A writer who never leaves home without a traditional notebook.

Tomoko ordered dessert. I passed, as usual, opting instead for cognac. The potatoes had begun to settle by the time my carefully warmed glass arrived. I felt their weight sinking me deeper and deeper into the well-upholstered chair, even as the wine soothed some of the pain in my aching knees. And I took my second sip of cognac, rested my chin for a moment on my hand, and promptly fell asleep. ♦

Spend a Day in Asia’s Most Exciting Art Capital