There Will Be Blood | My Amateur Thai Boxing Story

If you want to fight tourists on your beach vacation in Thailand, there’s a tourist bar on Koh Phi Phi waiting for you.

Story and Photos by Mateo Askaripour

A short man with a polo stretched out over his bulging stomach greets us at the door. “Come down to Reggae Bar! The best drinks! The best fights! The best of everything!” he shouts.

“We’re already here, man. No need to sell us,” I say, still feeling ill at the thought of having to fight a stranger in a Muay Thai boxing match I’d only signed up for yesterday.

Almost 24 hours ago, I was sitting at a bar on Railay Beach, south of Krabi on the Andaman Sea, when a muscular Thai man plopped onto the bar top a huge brick of weed. An Englishman next to me, Thomas, cautioned me not to touch it, lest police come and scan the Saran-wrapped brick for fingerprints.

After chatting and drinking for an hour, we made a pact. Thomas would travel to the island of Koh Phi Phi with me, to redeem his previous loss in a Muay Thai match at the Reggae Bar, and I would also enter the ring, albeit not with him. It may have been the booze or adrenaline, but something drove me to agree to this. 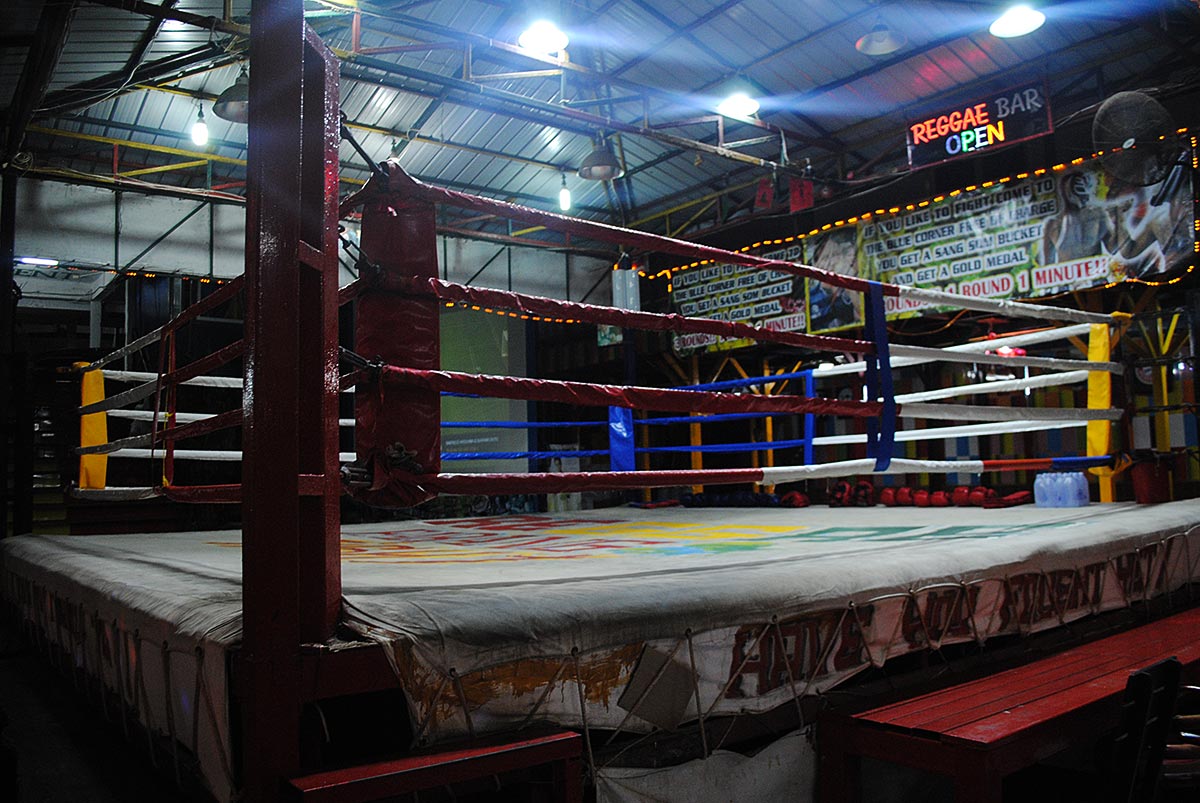 I never realized that stepping into the ring meant I’d have to actually fight someone—which meant someone would also be fighting me. Thomas shoots a look at me. “Come on, man. It won’t be so bad. I did it before and I’m going to win tonight.” He says nothing about my own prospects.

The room is a fully fledged boxing arena. Mismatched plastic chairs and tables surround the ring so spectators can view the fight from any and every angle. Despite us being the only two people here, I can see and hear it all in my mind. The crowd, the shouting, the debauchery. Jesus.

We grab a chair and Thomas orders two pints. “I’m not drinking,” I say, wanting to improve my chances of walking out of the ring without a black eye. Out of every fight I’ve ever been in, the only thing drinking helped was to numb myself to the pain. But I don’t want any of that now. The only thing I want is for it to be over.

“No worries, mate. Two for me, then,” he says, downing one in a single gulp.

“You sure you should be drinking, man?”

“Course, how else am I going to be ready? We English use this as a damn IV!” 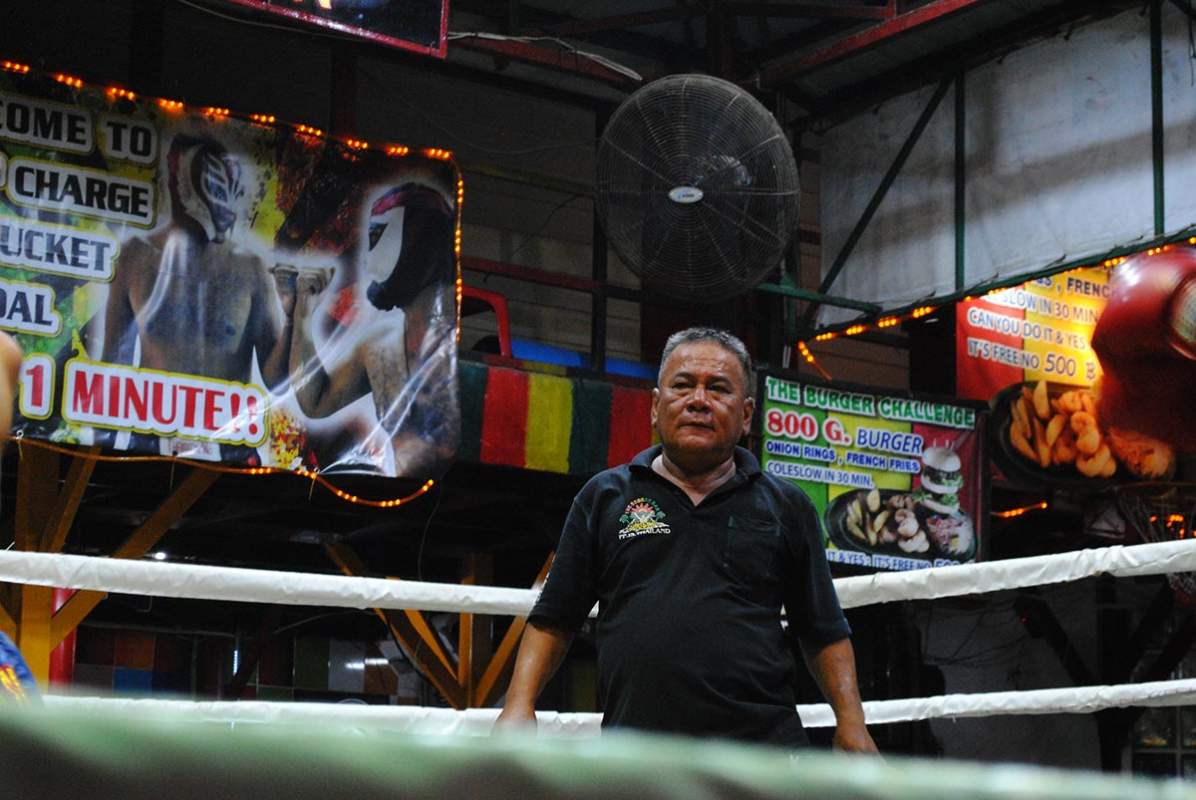 There’s a certain irony to this situation. We often visit countries to watch locals make a spectacle of themselves for our enjoyment, but here, we subject ourselves for a thrill.

Our audience starts filling the room, including our two new friends. We met Farideh and Jaleh earlier that day while snorkeling and wrestling beers back from monkeys.

Thomas looks wired up, and I can tell that this means a lot to him, maybe more than it should. He’s predictably unpredictable. One minute he’s waxing poetic about having sex under the stars, the next he’s pounding beers to prepare for a Muay Thai fight in a tourist bar.

The man with the polo shirt who was shouting superlatives outside comes in now, and he’s heading towards our table. My stomach tightens with each step he takes, eventually forming into a mess of knots.

“You two fighting?” he asks.

I hesitate for a second, and Thomas jumps in. “Yes, sir! We are.”

The man heads to other tables surrounding the ring. People are now furiously chugging beers, shooting flirty glances across the room at one another. The whole bar-turned-arena buzzes with something I can’t put my finger on—something dangerous.

Polo Man continues to go from table to table, pointing at Thomas and me, which causes Thomas to bolt up and goad the potential contenders. “Get up, Mateo,” he commands. “You need to let them see who they’ll be fighting, and make sure you let them know how confident you are.” I think that’s the last thing I need to do now, but I get up and pretend to be wilder than I feel.

A ripped Asian guy walks over to me after Polo Man prods him in my direction. “Have you done this before?” he asks.

I quickly size him up. If this were a wrestling match, it may not be so bad, but he looks quick. “No, you?” I reply, dropping my voice a few octaves.

He nods his head, and suddenly Polo Man appears. “You going to do it?” he asks the guy.

He gives me a long look, from the bottom of my feet to the top of my head, and nods. “Good, you’ll be the first fight,” Polo Man says.

My hands sweat as my heart slams against my chest so hard I swear other people around me can hear it. First fight? Why do we have to go first? Can’t we at least watch someone else go so I can pick up a few pointers?

Polo Man sets up the other matches of the night, including Thomas, who’s facing a pudgy blonde guy. Given all the “preparation” Thomas has done, as well as how much he cares about this, he’s surely going to win.

“Let’s go, mate!” he exclaims, downing his fourth beer of the night.

Farideh places a gentle hand on my shoulder and smiles. Am I trembling? “We’ll be your good luck charms,” she says.

The sound of my pounding heart fills my eardrums, drowning out the crowd. I need all the luck I can get.

Even though I feel like I can fall through the ratty ring at any time, the entire place looks far more official than it did before. Lights shine down, and with a helmet, gloves and shin guards, I feel like a damn gladiator.

Polo Man calls us both into the centre. My heart thrashes against my rib cage. I’m covered in sweat. The bell goes off. 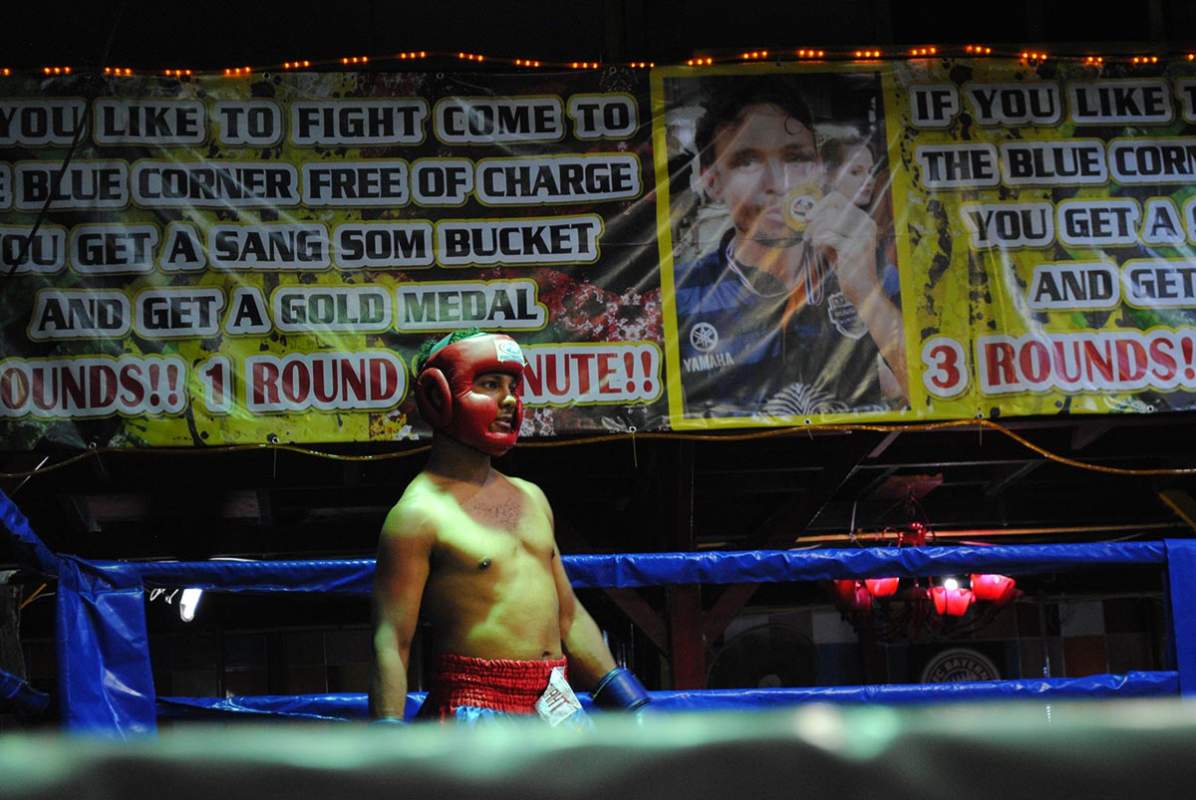 The author looking far less nervous than he feels.

I head straight toward the guy and knock him in the face a few times, causing him to fall. There’s some weird Thai music playing that sounds like clanging pots and pans. The guy gets back up and tries to kick me a few times, but I move out the way, absorbing a blow in my head before I instinctively try to pick up his leg. Polo Man says I can’t do that, and we restart in the centre.

Everything is happening so quickly. The bells, the rushing, the hitting. I head back toward the guy, and he runs away from me, increasing my confidence. I rush in again and throw a series of punches, landing a few good ones, knocking him down. I’m not looking when I’m punching—I don’t care if it looks like a sloppy farce, I prefer it to getting thrashed.

The bell goes off and we each head into our corners. “Hell yeah, mate! You got this,” Thomas eggs me on. “Just stay focused and don’t try to pick him up again.”

“Water,” I croak between heavy breaths. Thomas grabs one of the many bottles in our corner and drenches me in it. “In my mouth,” I say.

The Thai music transitions into Justin Bieber. Staring across at my opponent, I don’t know why, but I suddenly feel compelled to outdo him in any way I can—so I run into the centre of the ring and start breakdancing.

The crowd erupts, and my opponent starts dancing back at me, turning the ring into an all-out dance battle. Polo Man enters the ring again, this time with a confused look, and the music switches back to the Thai pots and pans.

“I thought you’ve never done this before?” my opponent asks me, his words drenched in accusation. 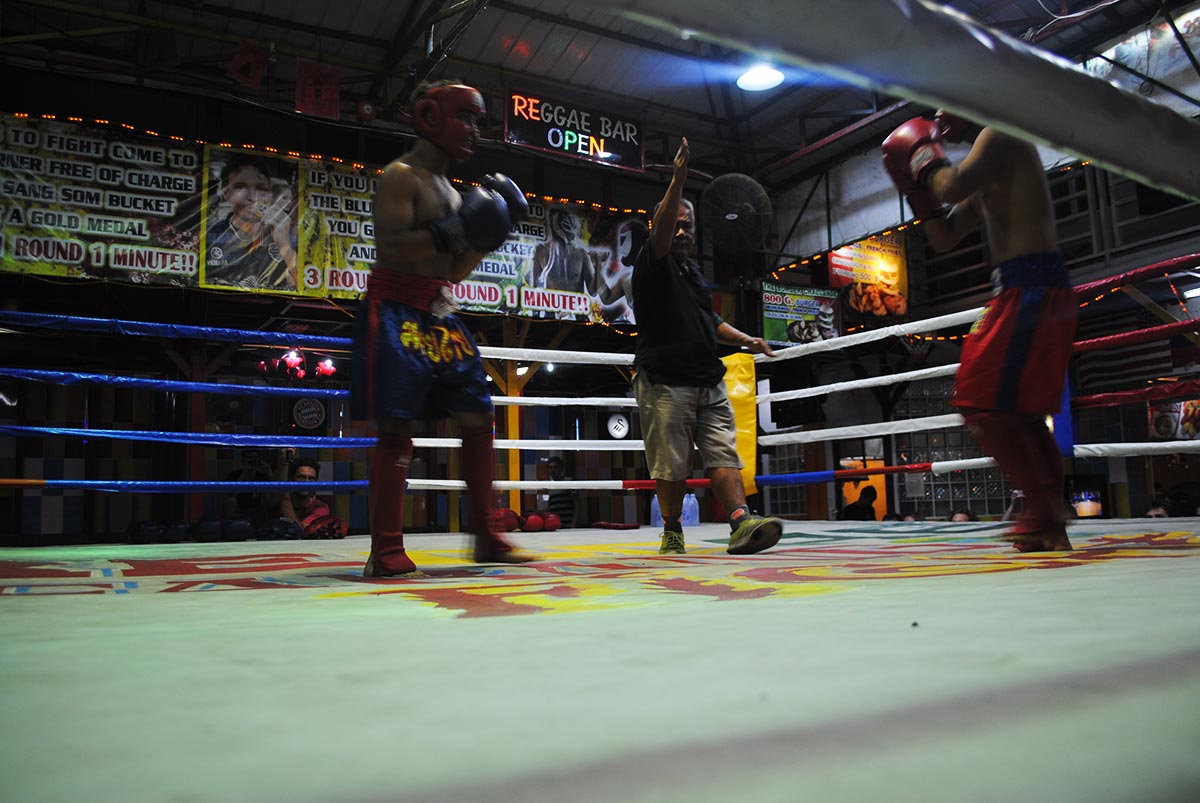 The author on the left, waiting to begin a later round.

He lands a good one at my face, momentarily stunning me. But instead of getting scared, I get angry. I rain punches down on him, repeatedly slamming my glove in his face, causing Polo Man to break us up.

Immediately after we start again, he runs at me and I dodge his punch, causing the whole crowd to scream. I glance at them and, in this moment, they resemble something from a nightmare; some of them shout with bulging eyes and veins; others’ mouths hang open, laughing maniacally; a few beat their chests. Where am I? What am I doing?

Round three proceeds uneventfully. At this point, we’re both so tired that any punches we throw are just for show. The crowd grows angry, and people yell at us to fight, but we continue pacing around until it’s over.

When the bell rings, Polo Man raises my hand to the applause of the crowd, and I give my opponent a hug. A medal is placed around my neck and someone shoves a huge bucket of alcohol with ice and straws into my hands. All that’s missing is a bejeweled belt.

Unfortunately, Thomas lost his match horribly. All the alcohol in his veins made him think he was some kung fu master, and he kept randomly trying to kick his balanced opponent, who threw haymaker after haymaker at his face until blood gushed out his nose.

One of Haymaker Man’s friends kept goading Thomas, causing him to sometimes stop in the middle of the fight and shout back at him. “You’re not fighting him!” I shouted repeatedly. With each crashing of Haymaker Man’s glove against Thomas’s face, the crowd went wilder, erupting in a full uproar when Thomas smashed down onto the ratty mat.

After the fight ended, I rushed to grab paper towels to stop the bleeding, but his spirit was already damaged. As he walked to the bathroom, blood trailing behind him, I saw the disappointment all over his face.

I looked around the bar-turned-arena and saw the satisfied look on everyone’s faces, as if they had just eaten a large, delicious meal. It was then I realized what the buzz around the room was that I couldn’t put my finger on before.

Mateo is a writer who quit his flashy job in New York City to live life on his own terms. He’s done everything from working at an orphanage in Nairobi to building a new university in Abu Dhabi to sleeping on volcanoes in Guatemala. And right now, he’s working to get his novel published. Regardless of where he is, he’s always working.

An Aztec Cleansing Ceremony: Celebrating the Dead of the Day in Oaxaca, Mexico