A Winter Holiday in Cyprus

Is Nicosia, Cyprus, the most divided capital of the world? Here’s Outpost contributor Dario De Santis in North Cyprus. (Part 1)

It’s December and Angeliki and I have decided to escape the cold and chaos of Istanbul and spend our Christmas holidays in Cyprus, to enjoy its many beauties and the mild Mediterranean climate. We spent four days in the Greek Cypriot side and three in the self-proclaimed Turkish Republic of North Cyprus. Unfortunately the island has been divided for over 40 years already.

From the Ercan airport, the only one in North Cyprus, we take a taxi to Nicosia (apparently there are no shuttle buses or any public transport at this airport), the capital of both the political entities of the island. Just like many other cities here, the capital has a Greek name (Lefkosia) and a Turkish one (Lefkoşa). Along with the English Nicosia, there are three names for the same place!

As a sign at the Ledra Street pedestrian checkpoint reminds us, Nicosia is the last divided capital in the world. Not a record to be proud of. Only some years ago, it was virtually impossible to cross the Green Line, the buffer zone established by United Nations. Today, thanks to the easing of tensions between the two states, it is quite easy, at least for EU passport holders. From other checkpoints it is also possible to cross with a rented car, provided that you purchase a special insurance valid in the other side. 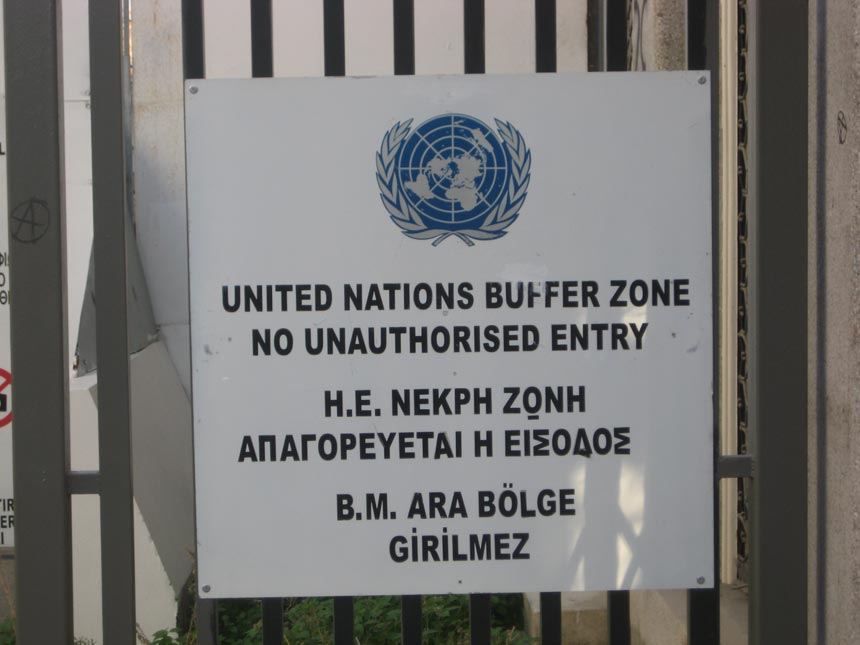 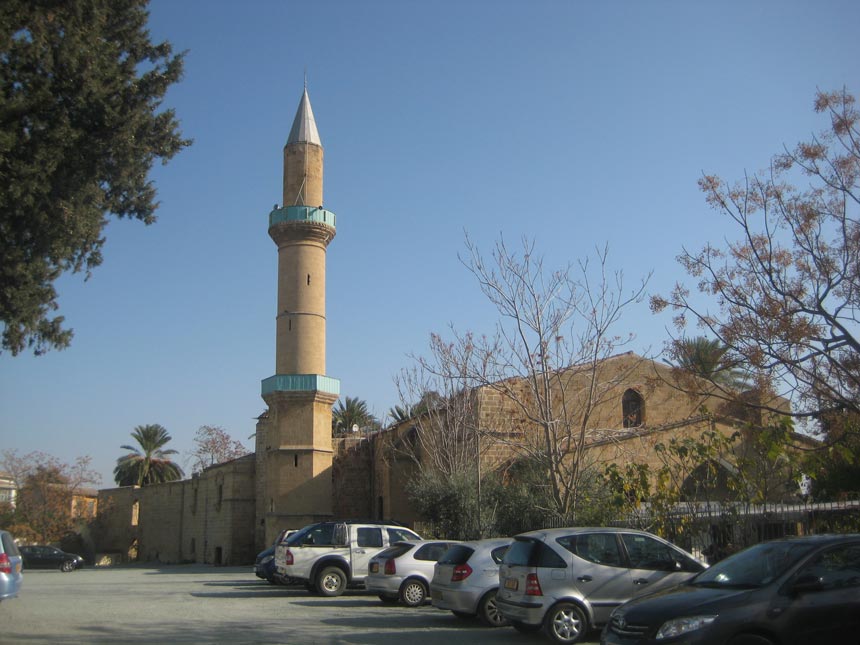 Despite being a bit far from the golden beaches and the famous archaeological sites of Cyprus, a visit to Nicosia is surely worth it. Crossing the checkpoint and walking along the Green Line, marked by a fence and barbed wire, is quite an experience. Fortunately I don’t know many places where one can do that. In both parts of the old city, surrounded by star-shaped outer walls, many interesting sights are found. The Greek Cypriot side boasts several good museums, fine buildings, churches and many cafes, shops and restaurants. Especially in the evening where there’s definitely more to do in this part of the city than in the Turkish side. 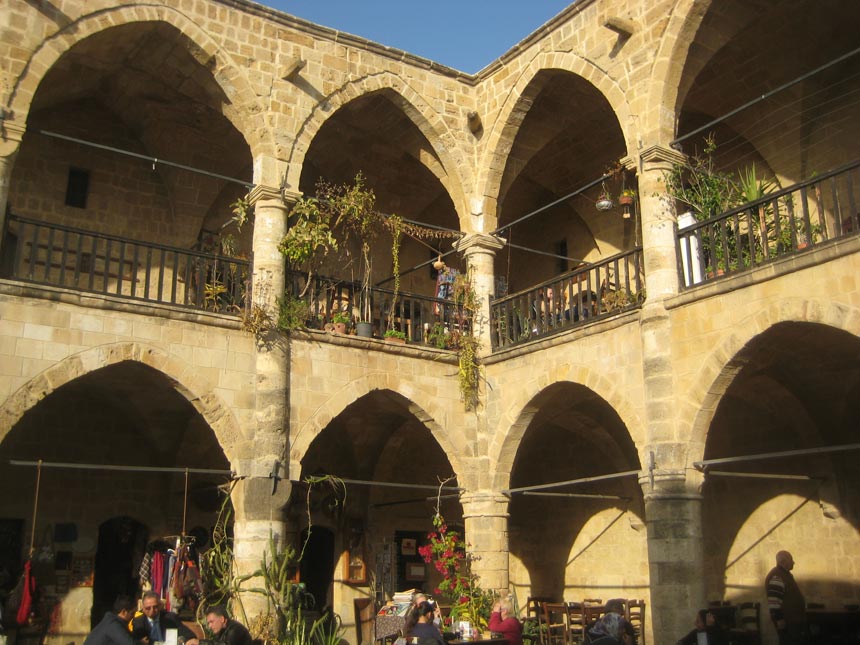 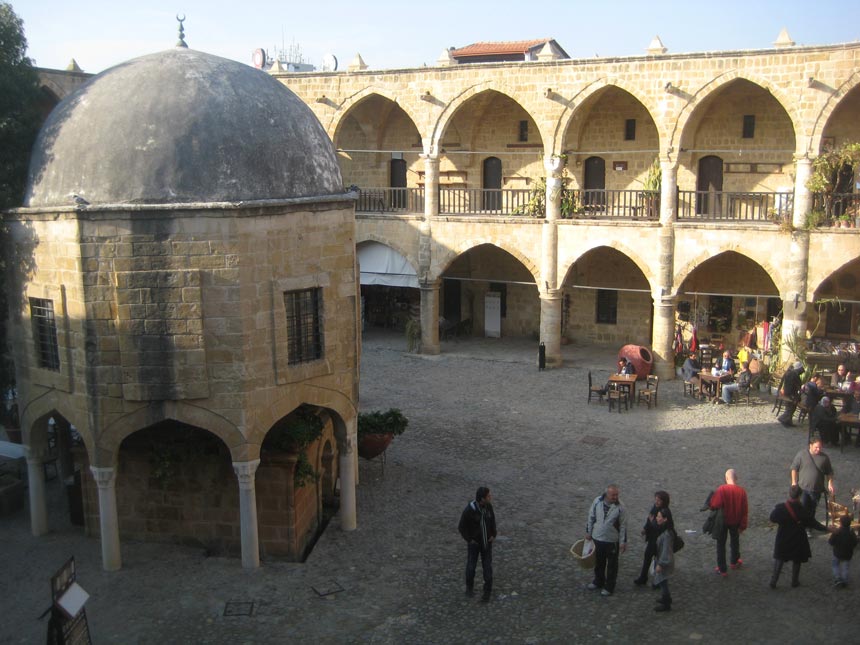 However the Turkish side exhudes a more relaxed and chilled out vibe. Most of this area, in fact, has been kept unchanged since the seventies: old Ottoman mansions, the Turkish baths and the small bazaar on Arasta Street evoke a feeling of nostalgia. The sights that most strike our imagination are the Selimiye Mosque, with its blend of Christian and Islamic influences (it’s an old Gothic church converted into a mosque) and the Buyuk Han, a 16th century, beautifully restored caravanserai (a sort of inn with a central courtyard for travelers which is common to the desert regions of Asia or North Africa), whose arches host handicraft shops. 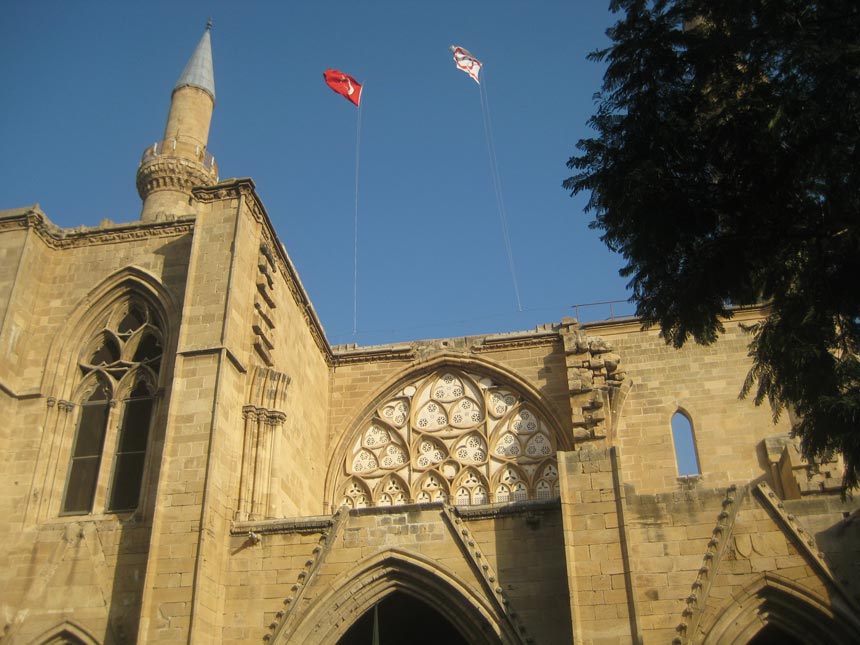 Limassol and the Troodos Mountains

Our base in the Greek Cypriot side is Limassol (Lemessos in Greek), where we are hosted by some relatives of Angeliki. Limassol is the most modern and cosmopolitan city of Cyprus. The little old city with its castle is pretty, but tourists come here mostly for its 7 kilometre pedestrian waterfront, lined with palm trees and hotel resorts. 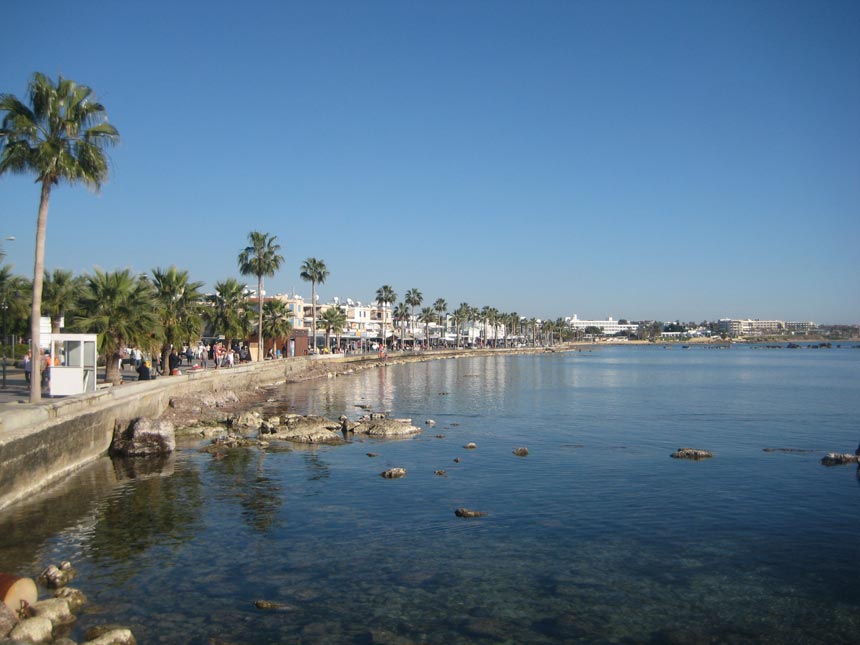 Our excellent hosts want to show us around the mountainous region of Cyprus, some 50 kilometres north of Limassol. In about one hour we pass from strolling along the seaside wearing half-sleeves, to a snowball fight in the Troodos Mountains (wearing coats of course). Scattered around this forest-covered mountain range (its highest peak, Mt. Olympus, reaches 1952 metres) are ski centers, quiet traditional villages and plenty of monasteries. 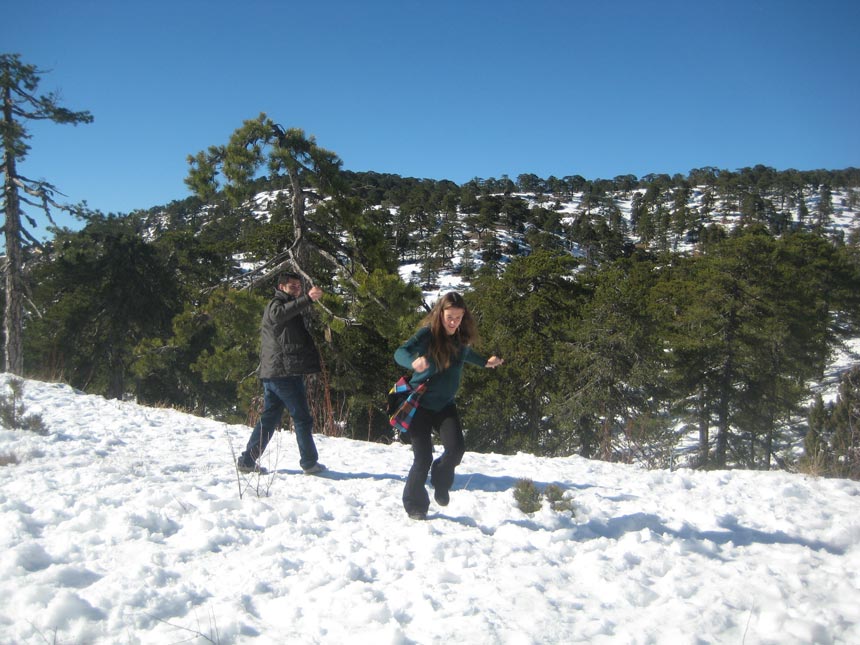 From seaside to snowballs in Troodos Mountains

Loukas and Maro (Angeliki’s uncle and aunt) take us to the world famous Kykkos monastery. I was expecting to see the ruins of an ancient Byzantine monastery, instead I’m faced with a very well-kept and relatively modern structure. Although having been founded at the end of the 11th century, the monastery was completely rebuilt in 1831. The most impressive section are the interiors of the church, where we can admire marvelous frescoes, byzantine relics and holy icons embroidered with gold, silver, mother-of-pearl and any kind of precious material. 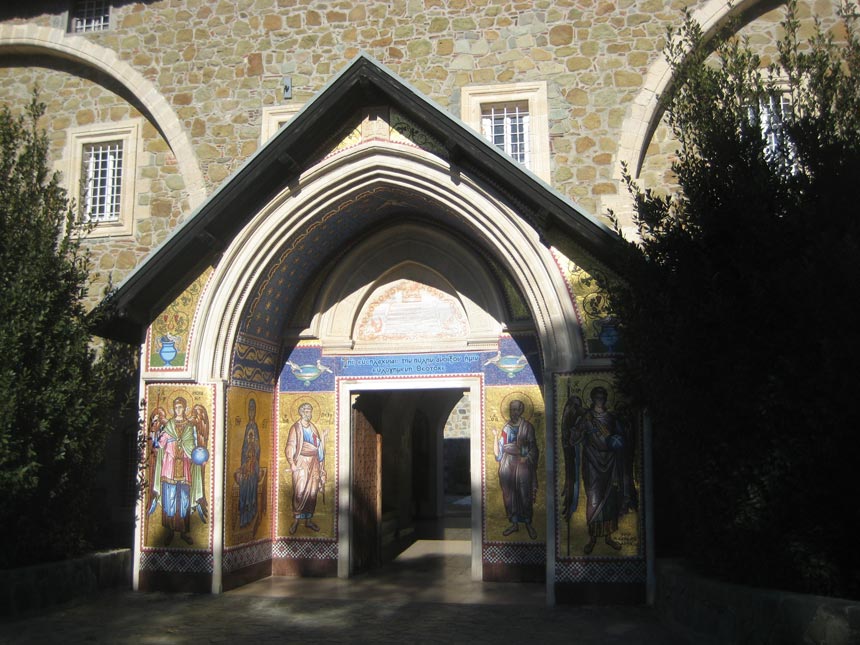 In order to reach the tomb of Makarios III, first president of independent Cyprus, I, Angeliki and her cousin Iota, have to walk the 2 kilometres from the monastery up Throni hill. The austere stone sepulcher could not be set in a more peaceful environment, plunged as it is into a forest of pine trees. Before going down we stop to soak up the amazing view of the valleys sloping down towards the sea. 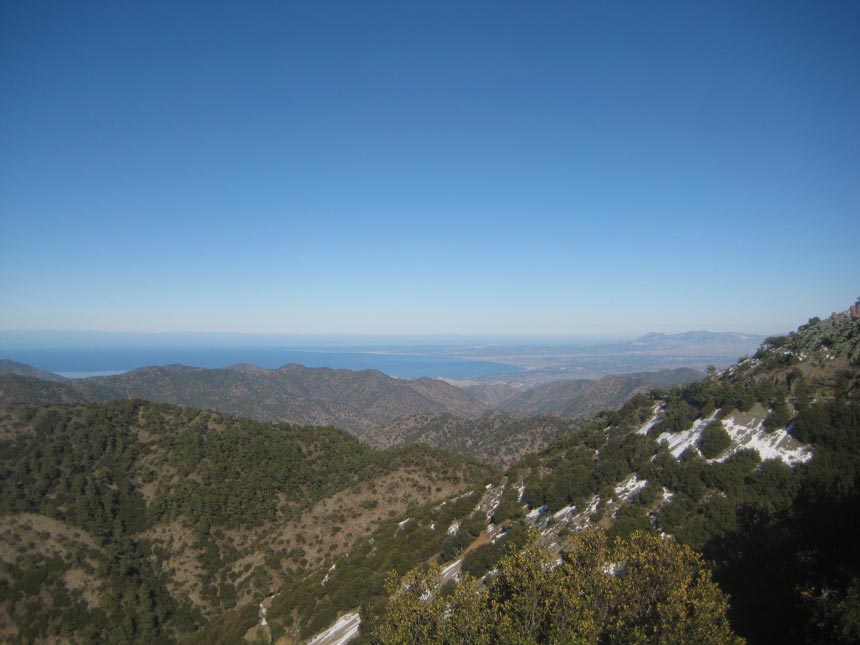 Visiting Cyprus in winter, we surely are missing out on the gorgeous beaches and the crazy nightlife, when places like Ayia Napa, Protaras and Coral Bay are swarmed with visitors. On the other hand, winter might just be the perfect time to visit as we truly feel like we have everywhere to ourselves. No lines, no need to book early, no unreasonable prices, no hassle to find a parking space or a table in a restaurant. I’ve also noticed that locals are much more friendly in the low season. Surely the water is a bit cold, but we can still wet our legs. And we choose a magical place for that: Aphrodite’s Rock, a white rock protruding from the sea, where, according to the myth the goddess of beauty was born. 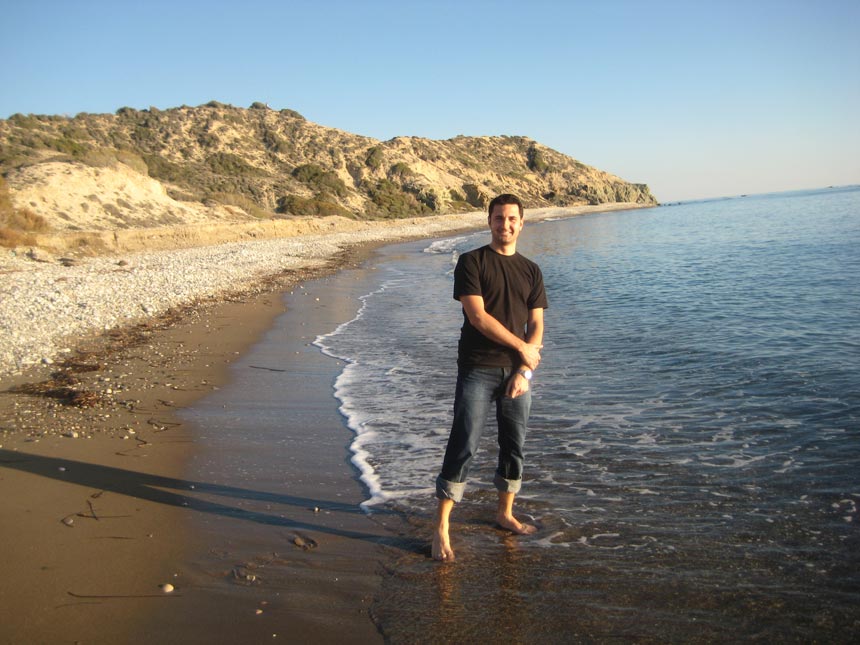 Aphrodite’s Rock and the beautiful coast 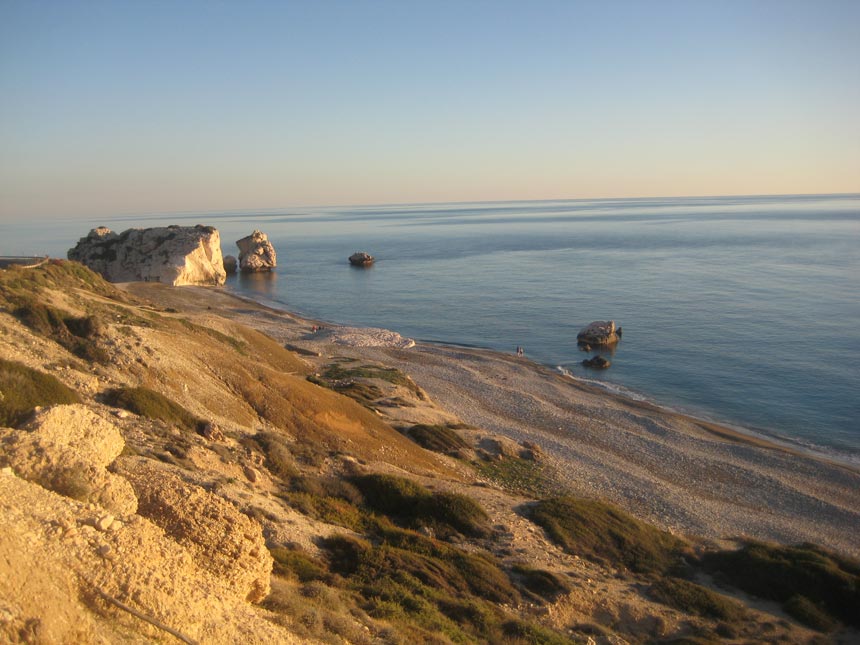 So Angeliki, with her jeans rolled up to the knees, walks into the foamy waves emulating the goddess, while I immortalize the event by taking pictures. Aphrodite’s Rock is half way between Limassol and Paphos. Along the same route there are many sights worth seeing. We have time only for some of them, the crusader fort of Kolossi and the ruins of Kourion, with its magnificent theater overlooking the sea. 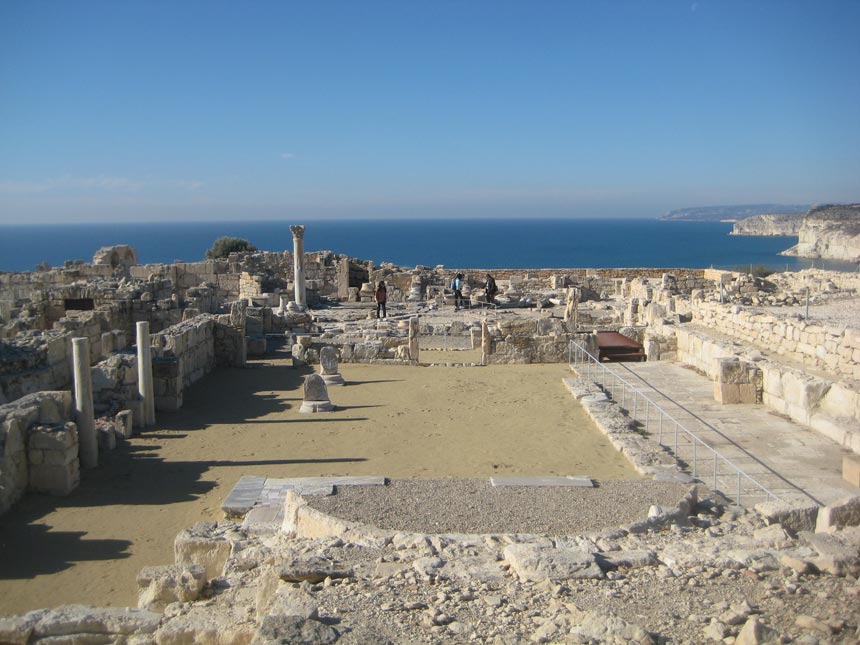 Arguably Cyprus’ most important archaeological site, the Tombs of Kings are located only a couple of kilometers north of Paphos’s port. The tombs, dating back to the 4th century BC, are awe-inspiring especially considering their age and size and the fact that they were entirely cut into sandstone. Their builders even bothered to decorate them with massive Doric pillars! Misled by the grandeur of the complex, initially archaeologists believed that the tombs were the resting place of kings; only to find out later that aristocrats and high officials were buried here. 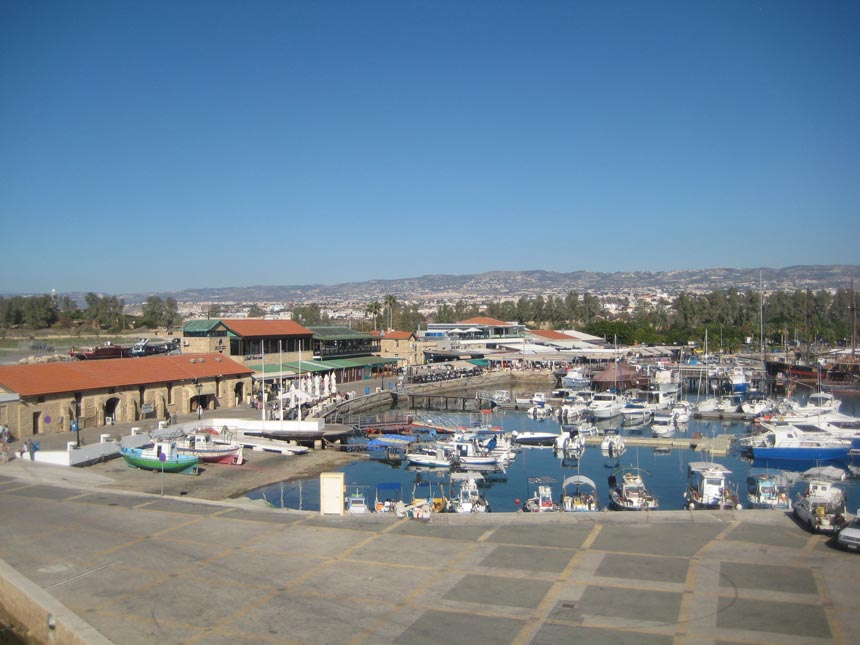 Incredibly, we are the only visitors and while we explore the tombs the only sound we can hear are the waves washing ashore. The other treasure of Paphos is represented by its Roman mosaics (a UNESCO World Heritage site along with the Tombs of Kings) portraying myths and widely considered among the most beautiful ever discovered. 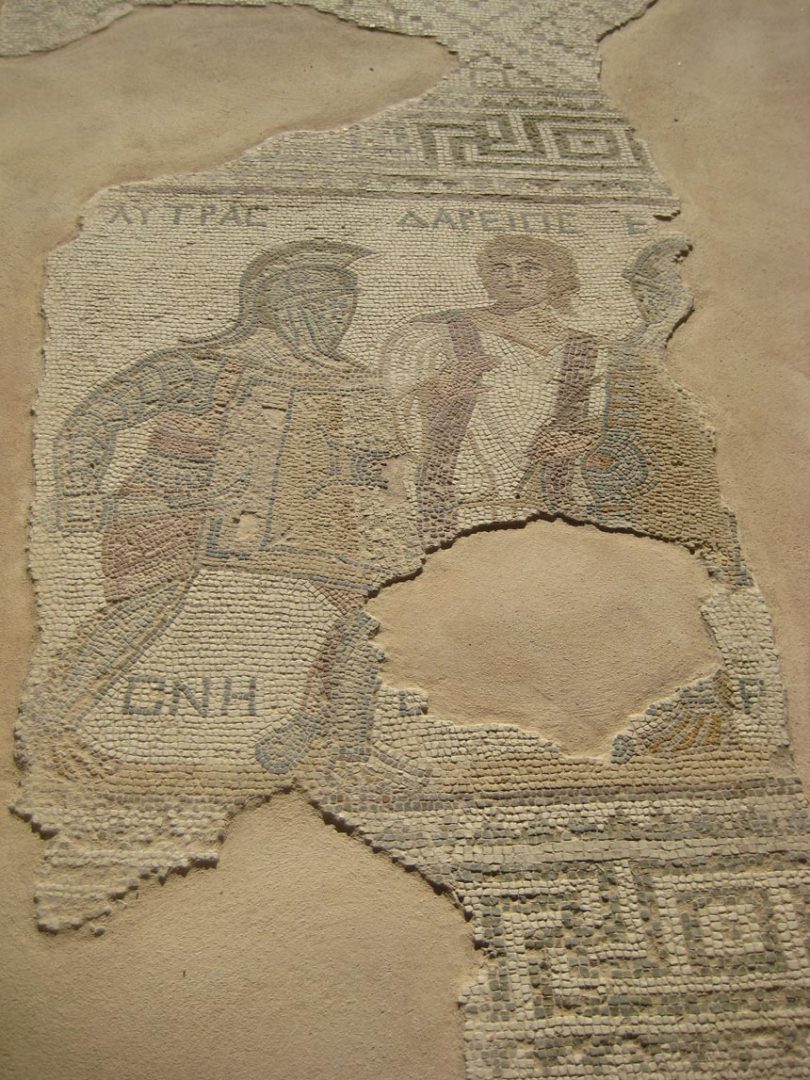 Tombs of Kings and an ancient mosaic 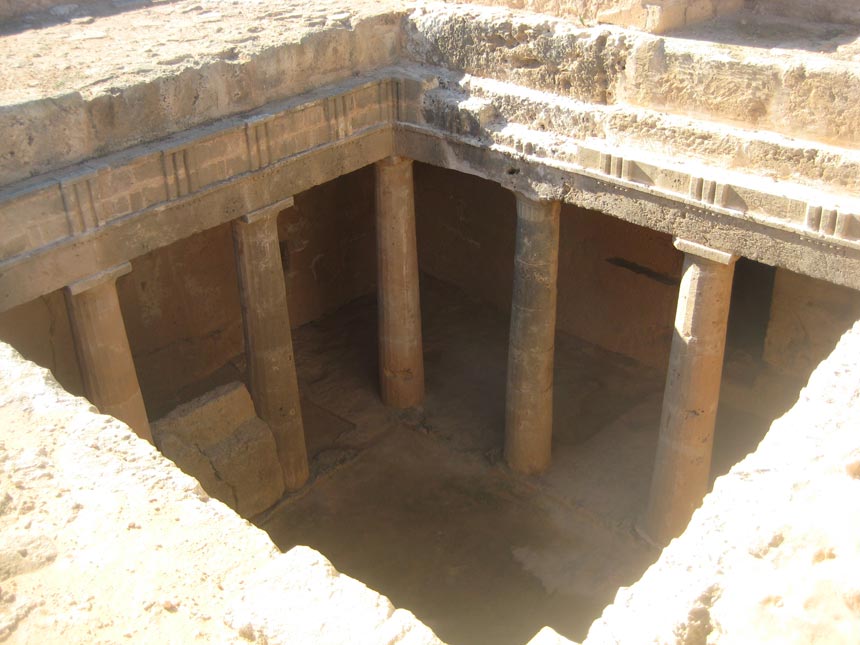 The charming little port, embellished by the medieval fort, is the best part of modern Paphos. Here we have lunch in one of the many outdoor restaurants, one where there is a pelican walking among the tables!

On Christmas Day no sightseeing. Rightly, we spend it with the family. First we go to the church, then for lunch, perfectly according to the local customs, Angeliki’s relatives roast some lambs in the garden. It’s December 25 and we are eating outside. Yes, life is sweet on the shore of the Mediterranean.

On our last day in the Greek Cypriot we head to the eastern region of the island. On the way to Larnaca, our attention is caught by Choirokoitia UNESCO World Heritage Site. Choirokoitia was a Neolithic settlement inhabited as far back as 7000 BC. At the foot of the hill are some reconstructions of the circular stone and mud huts, whereas the actual findings (about 50 dwellings) are found a little up the hill. Although the sight might not be that impressive to untrained eyes like ours, we don’t fail to understand its great historical value. 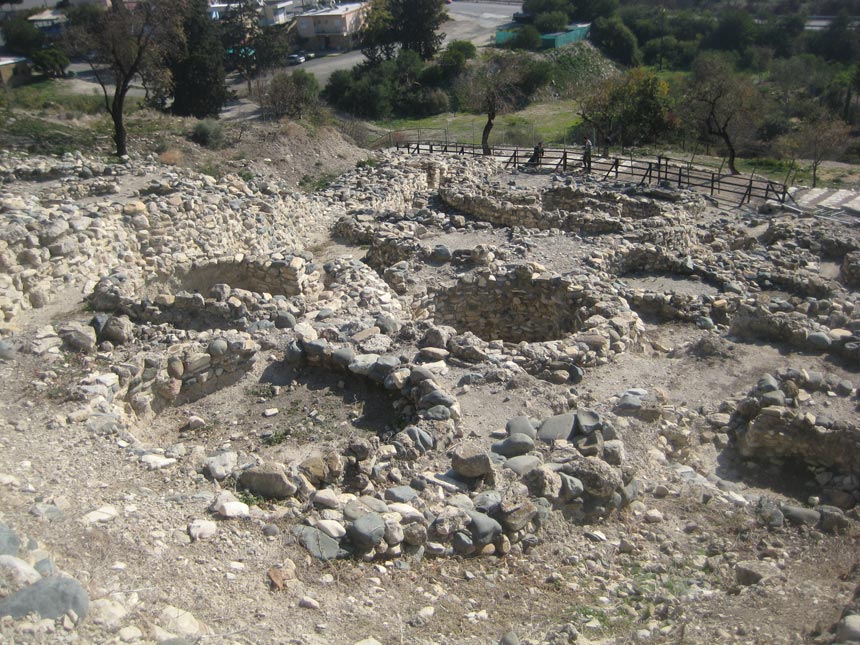 When we get to the center of Larnaca, the town seems still half asleep. There are only a few people walking along the Finikoudes, a palm tree-lined waterfront reminiscent of a tropical island. In summer we would probably  have found hundreds of tourists, packing the bars, the restaurants and hotels facing the sea.

Finikoudes connects the marina to the medieval castle and the nearby mosque, marking the entrance to the old Ottoman quarter of Skala. We wander for awhile around the maze of narrow alleys lined with neglected whitewashed houses, some of which now host little handicraft and souvenir shops. Without knowing exactly how, we end up in the main square, dominated by the splendid St. Lazarus’ Church (9th century), a masterwork of Byzantine architecture bearing evident Roman-Catholic influences. In the lavishly decorated interior lies the tomb of Lazarus, the man who, according to the Eastern Orthodox tradition, after being resurrected by Jesus Christ, moved to Cyprus and became the first bishop of Kition (present-day Larnaca). 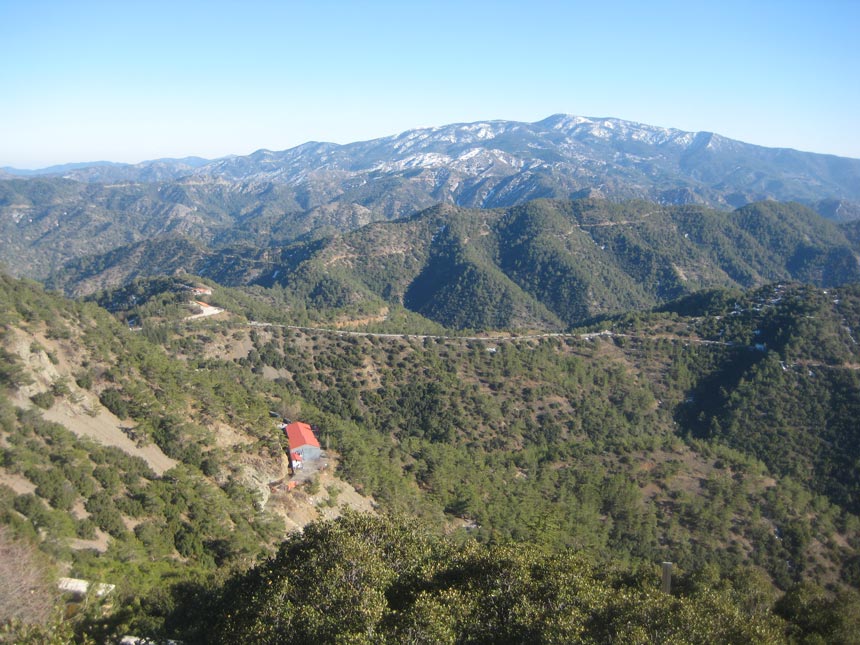 A final look over the incredible landscapes of Greek Cypriot

Heading to Nicosia, only a few kilometers out of Larnaca, the road runs along a vast salt lake. In the distance we catch sight of a flock of pink flamingos feeding in the water. A bit farther rises the silhouette of Hala Sultan Mosque, wrapped by date palms and cypresses in a mystic atmosphere. Perhaps a foretaste of what awaits us in the other part of the island.

The Truth About Travel Warnings