The Tea Sessions with Jeff Fuchs | Bowls of Tea, Hands of Stone in the Himalayas

In his exclusive series for Outpost, explorer, tea aficionado and editor-at-large JEFF FUCHS reflects on the fascinating people and indelible moments of his extraordinary expeditions, and the role tea has played along the way.

Wind is rumbling through every surface, and the black tent around us flaps and shudders under its force. An entire Himalayan epic is being played out just beyond the yak-wool tent, which is one of six dwellings in Arong Dhotok.

Time-tested over centuries, the tent symbolizes a lifestyle wholly revolving around the elements, and (at least for now) untouched by the modern world and its intrusions. A local saying sums up the forces that rule the Tibetan Plateau: “It is the mountains’ winds and snows which dictate all.” It could be added that in such realms, an offering of tea (or not) also dictates.

We are four and sit facing an ancient man who is wrapped in furs that have seen better days. This place, Arong Dotok (meaning “Stone Roof”), rests in the belly of the grand and secretive Nyenchen Tanghla Range (which itself sits within the Himalayas), where needs are measured on a far different scale than that in the lowlands.

Here, the local version of luxury could be an extra bowl of tea, an additional day of rest, or an hour with friends around a fire. 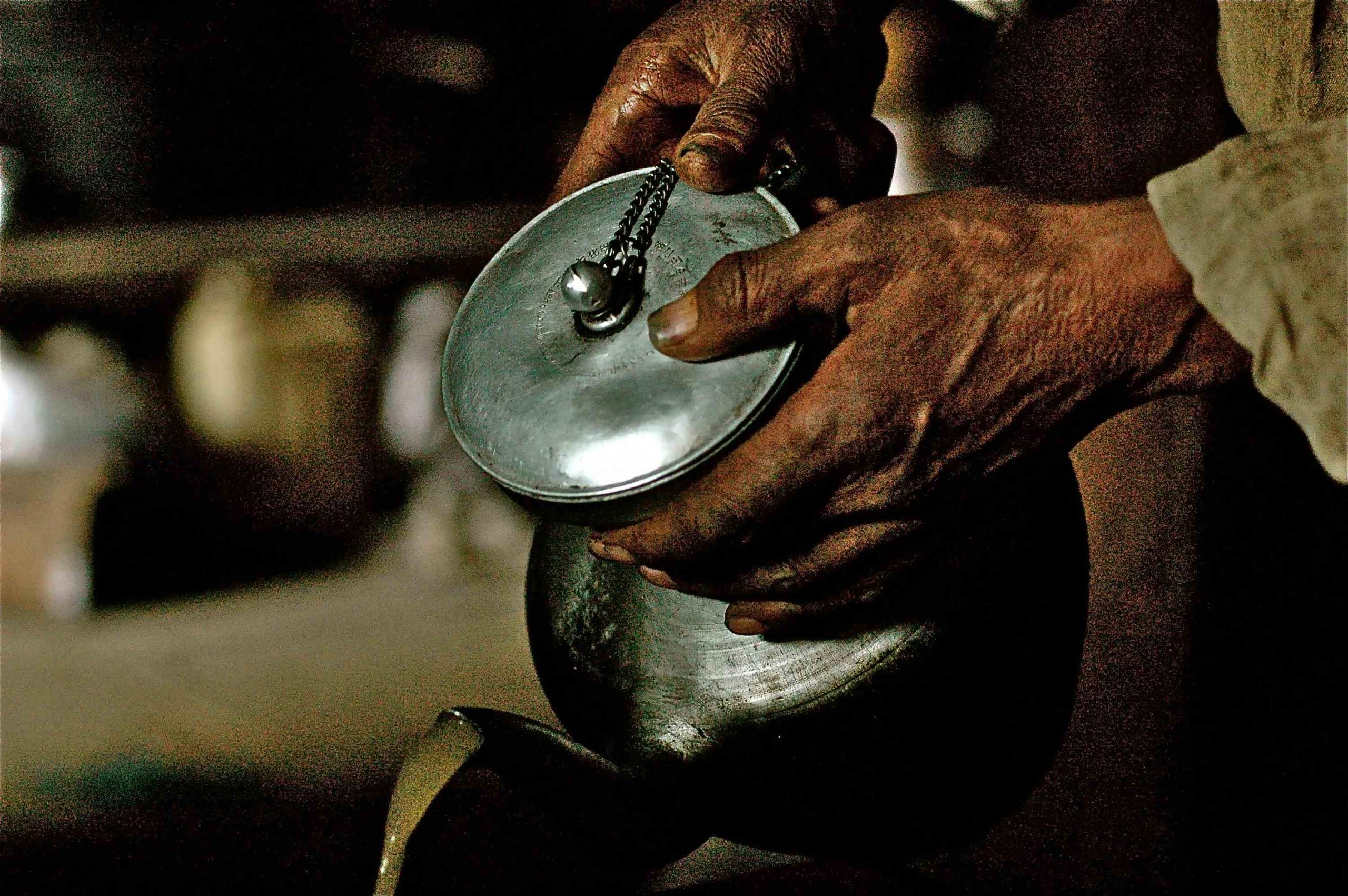 The ever-present offering from any homestead in the mountains: tea.

Within this tent with buffeting winds, this elder’s every gesture and word mesmerizes. Each movement is deliberate and unhurried. Sun-scarred, hollow-cheeked and ancient, Yeshi and his long body remain as formidable as the elements outside. It’s in his very stillness that he seems even more powerful and vital, as though he is made somehow more deity-like with all of the lives he has lived. 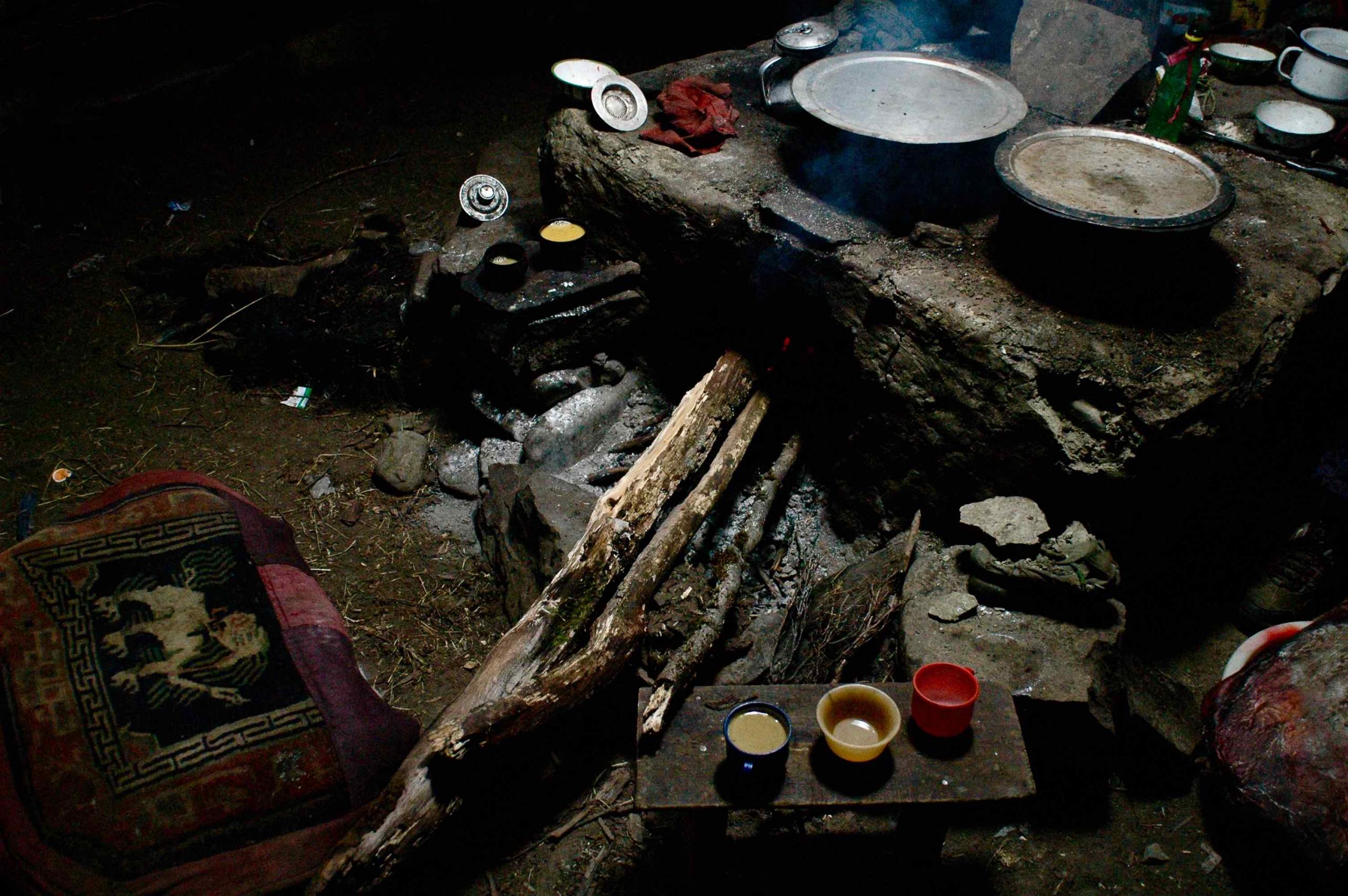 Where most every day begins and ends: around the fire, where flames are kept alive throughout the day and night.

We are in a space where wind, sun, and snow are still spoken of as if they were living, breathing things; where intuition and gutfeel are imbued in every mortal being, and the concept of fate isn’t discarded as pessimism.

Yeshi is one of the last remaining muleteers (called “la’do” in Tibetan: “hands of stone”) to have made repeated journeys ushering tea, salt, and other goods across the Himalayas, spanning regions both within and beyond the mountains.

Known in Mandarin as “Cha Ma Gu Dao” and in Tibetan as “Gya’lam” or “Tre’lam” (“wide road” and “mule road,” respectively), The Ancient Tea Horse Road is only recently getting some of its much-deserved credit in the weave of Asian (and tea’s) historical context. With little of its history recorded in any database, its participants are themselves its story-holders and memory banks, and they are as legendary and famed as the route itself. 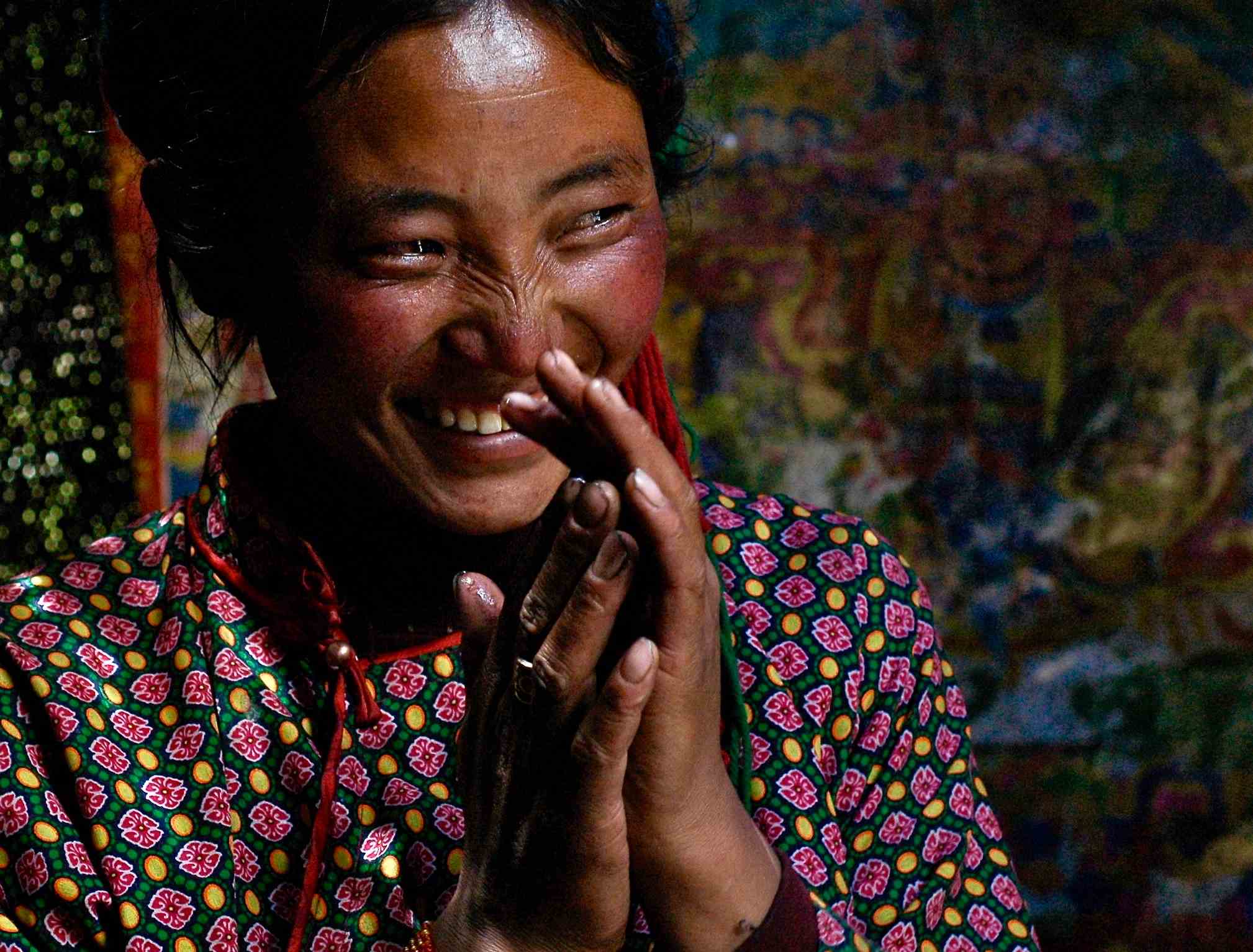 A bit of nomadic joy during a moment of miscommunication. The moment was followed by an offering of tea.

Time with such scribes is to be counted as something of a blessing. For me and my mountain-addled mind, they are deities, and are sprinkled with the gold dust of legends.

Famed for his endurance and ability to safely arrive with cargo intact, in even the most brutal blizzards, it is evident that Yeshi is still regarded as royalty within his clan for both his efforts along the route and his memories.

I’m trying to revive those memories, and it is the reason I now have a wooden rhododendron bowl full of pungent butter tea within my palms. Tea here, is the great convener and restorer. As long as I choose to sit here, my bowl will be wordlessly filled by a wool-clad woman of smiles who whisks around the tent with a battered tin kettle.

The team I have been trekking with for over a month are tucked close and immediate around a dung-fuelled fire within the tent. We are comfortable (or perhaps tired of) enough to sit quietly without the constant need of chatter amongst ourselves. Or perhaps all are as demure as I in the face of such a being. 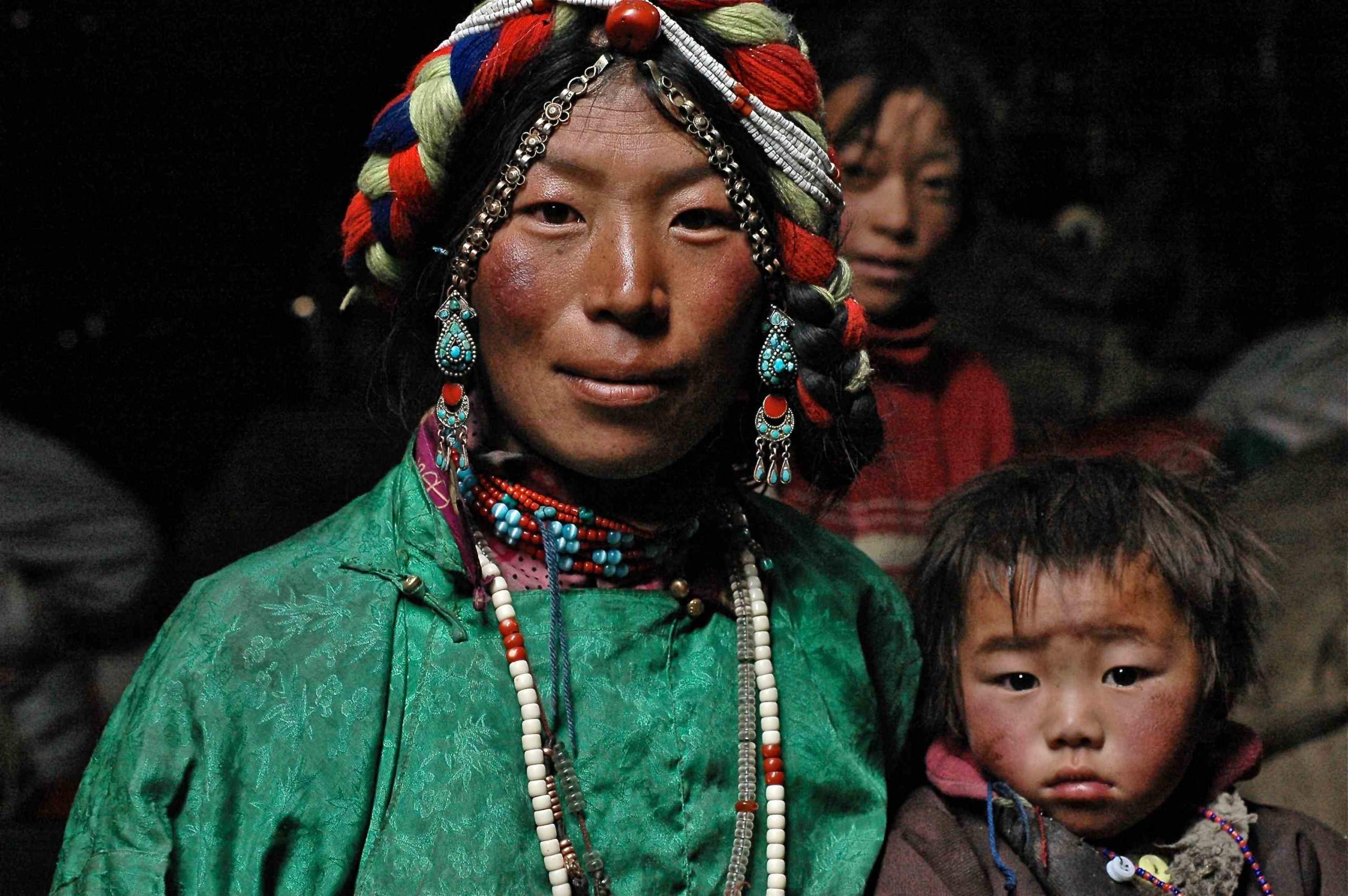 A nomadic woman, Omu, with her beautiful child, as Jeff and the expeditioning team bid farewell.

Wafts of acrid smoke mix with pungent yak butter, imbuing everything before being sucked out of a flap in the roof of the tent into the harsh thin-aired atmosphere, which contains approximately 40 percent less oxygen than at sea level. Our grime-stained faces of desiccated skin, sunscreen, and caked sweat hint at the struggles encountered along this route just to arrive.

Worn down and withered by the bludgeoning sun and relentless winds, we are modern-day journeyers along this highway in the sky. Sonam, the lithe endurance machine and linguist, the cerebral and powerful Norbu, and our own alchemist and man of reason, the gentle Nomè, number out our team. All sit riveted by Yeshi. 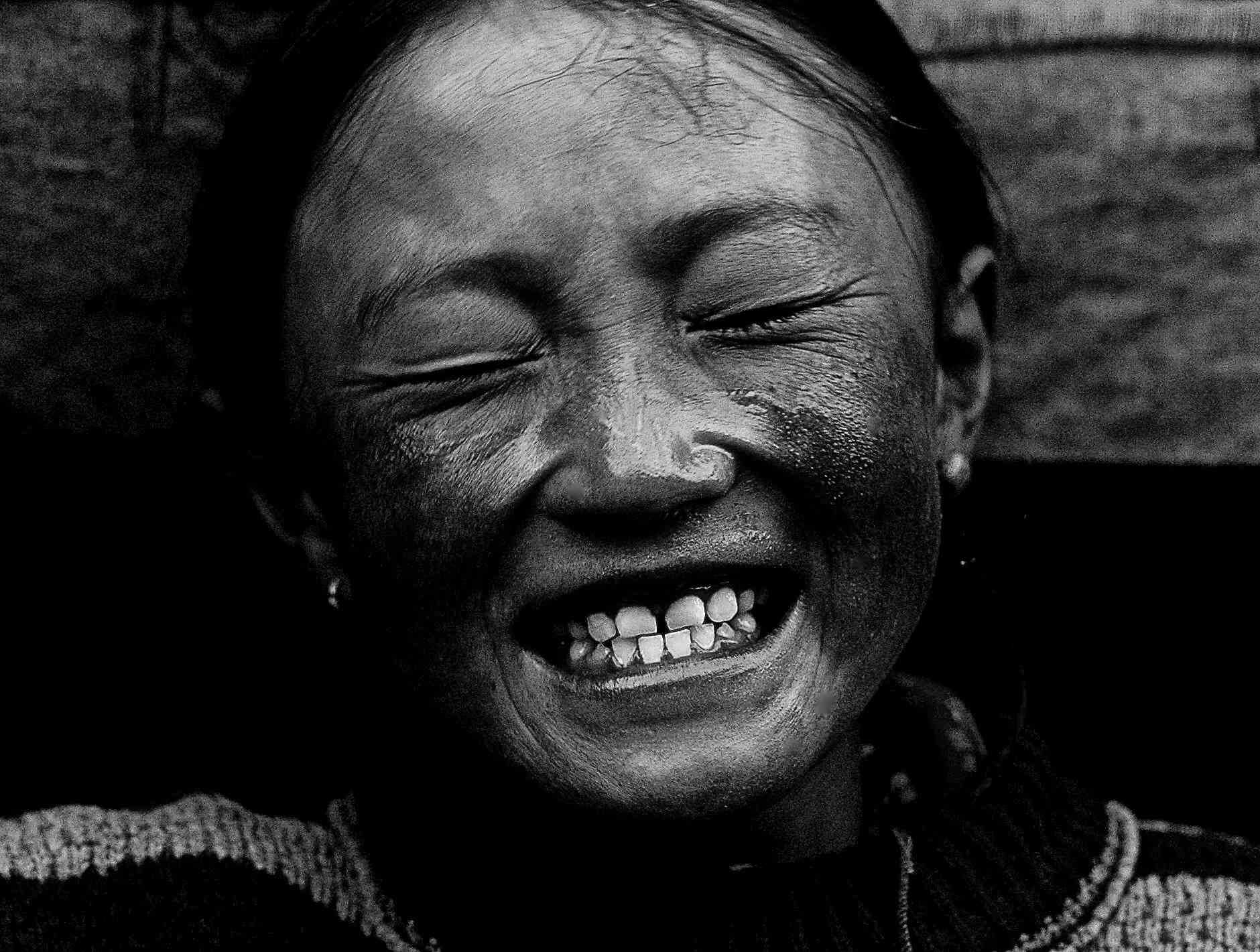 In true nomadic custom, a girl “wears” butter on her skin to both moisturize and protect against the climate and altitudes. Butter is also a compatriot of tea in these parts!

He looks down to his own bowl of buttery tea. This butter or churned tea— “bo’ja” or “po’ja” to Tibetans—isn’t for those who doubt the constitution of their digestive tracks. Laden with unpasteurized yak butter which supplies linoleic acids (essential fatty components), along with the addition of the electrolyte salt, which moderates the body’s fluid balance at these moisture-sapping altitudes, the underlying element is the most vital—tea.

In this case, the tea isn’t a commodity described with syrupy or descriptive language; nor is there talk of a “Single Origin” or “Spring Harvest.” Here, it matters not where the leaves come from as long as they are stewed to an enamel-testing strength.

At one point (when perhaps the tea has hit his system), Yeshi looks directly at me with a bit of fire and announces that if I really do wish to hear stories of the route, I will have to “listen.” He has heard that Westerners are not good at the skill of listening. His words are being translated by his old friend Sonam, and what he says is as startling as the setting we find ourselves in, though it is an observation I’ve often encountered. 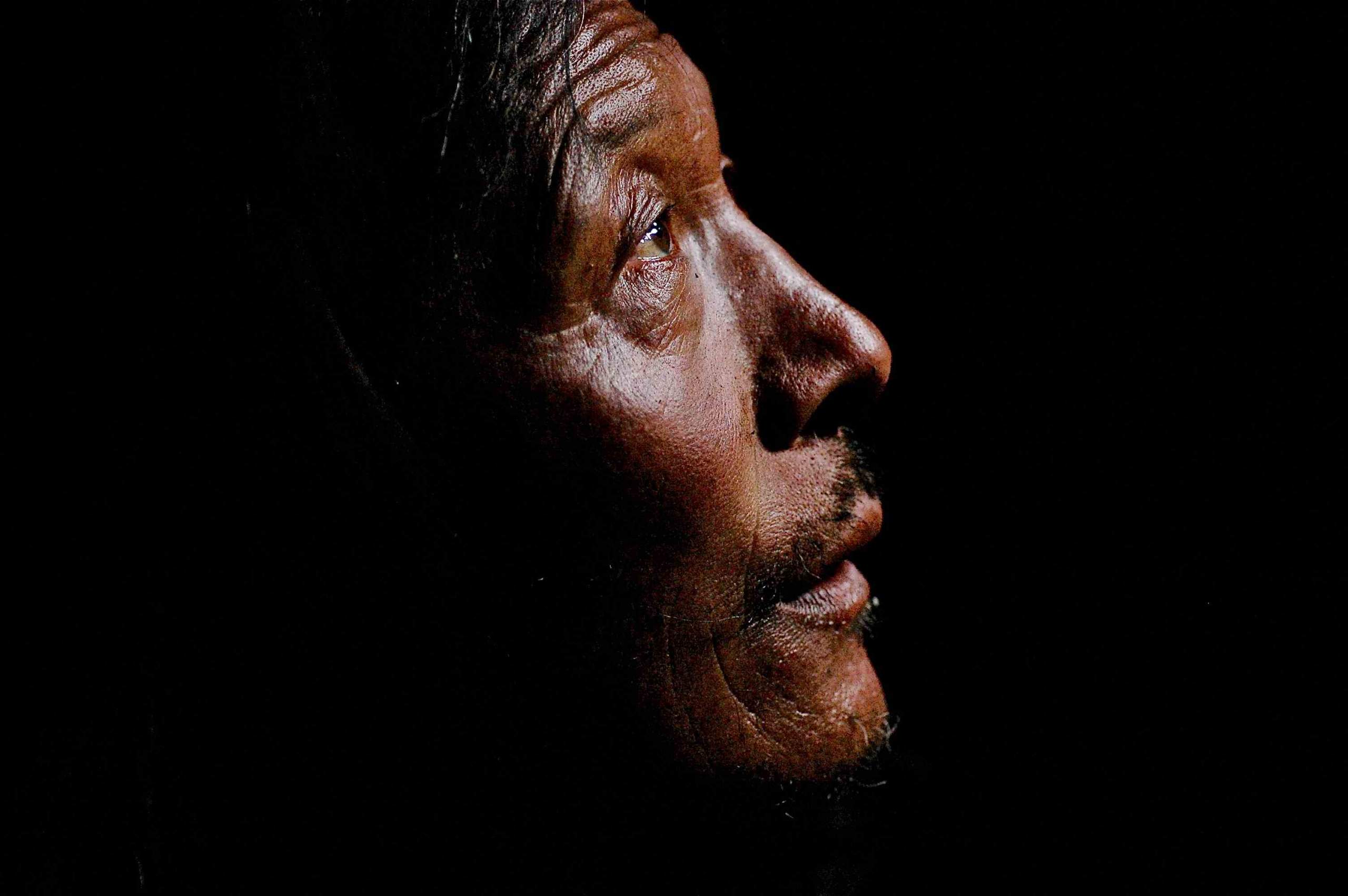 In a nomad’s tent, a local looks peeks out through a hole to check on one of the most eternal of discussion points in the Himalayas: the weather!

Yeshi adds that I (and here he directs the intention to me, in particular) will sit and listen until he is finished. In this intense moment, our “teatime” becomes something a little more special. At this moment, every word from Yeshi suddenly becomes, for me at least, an event. Suddenly, everything is distilled into this one bit of time; and the tea in my hands, and this time, become the only things that matter.

Tea is what we share, tea is what fuels us, tea is what we speak of. As we sip, it remains an almost sacred panacea, a kind of liquid welcoming-matt, something far beyond a simple consumable. Here in these mountains, these heights, where tea had to carted up by caravans and traders (still now), the leaf is something akin to a deity. Offered up often before conversation and after conversation, upon waking or after dinner, to soothe disputes or bargain with, to pass the time between collecting yak herds, it remains a kind of divine habitual right.

If it isn’t offered, even from the most downtrodden of homes, there is a serious issue. In its informal formality, it reigns supreme.

Yeshi’s monologue brims with highlights and struggles along the route, speaking of characters, of mistakes, of revelations, even of a fight: “I was young and arrogant and didn’t understand the protocols of the route.” He was beaten up badly by another muleteer (who was half his size) when he refused to make way for another caravan that had the right of way.

His words are delivered without any colourful language, or pride. It is a tale that doesn’t need embellishment, and told with a voice that has weathered elements so rugged it’s scarcely conceivable. There’s a hint of a smile on his wide mouth when he recounts the dangers of travel, as though the memories simultaneously stir melancholy and joy. He takes tea in nips between his words. I take mine, when he takes his. 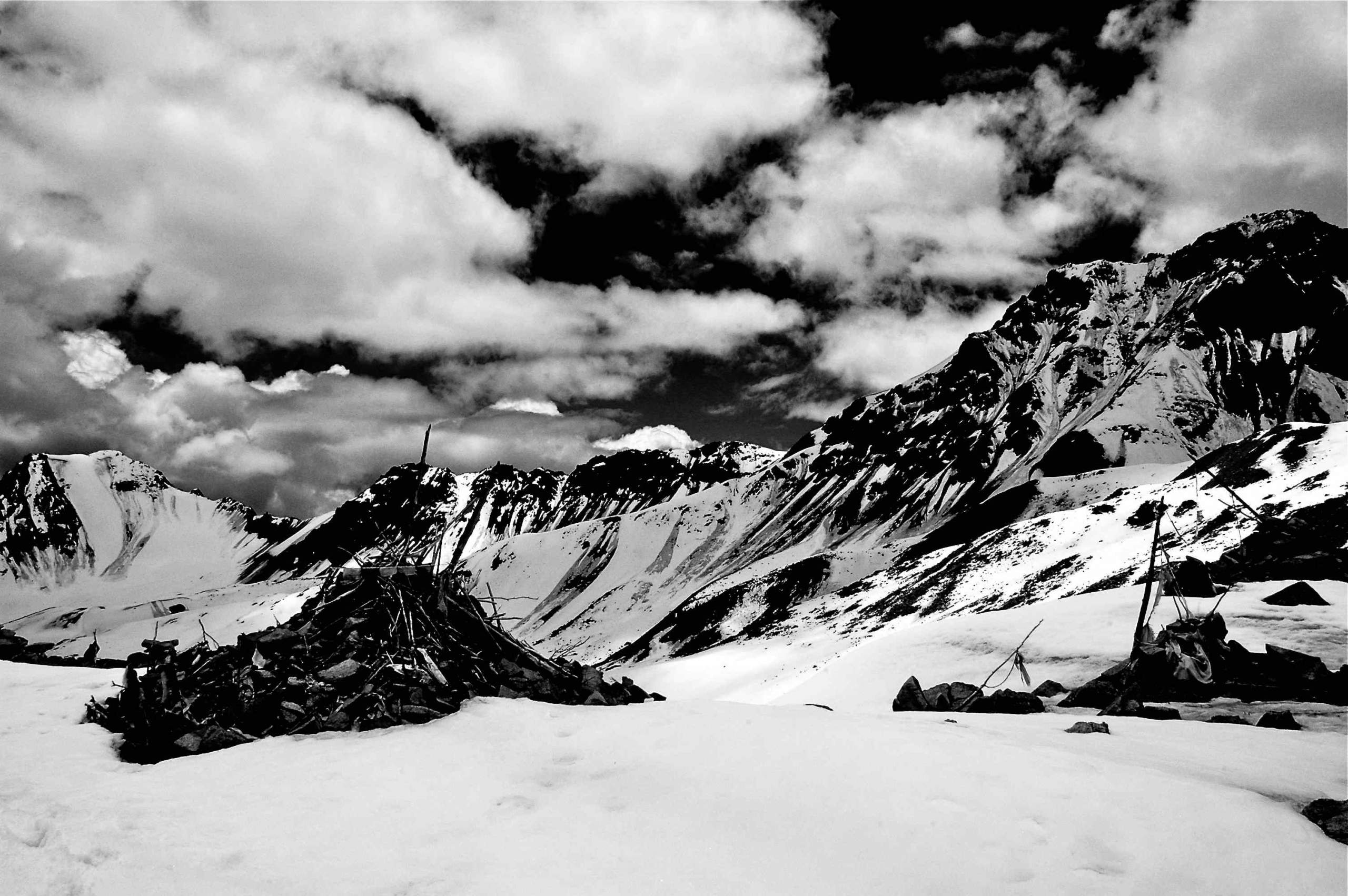 “There were many ways to die on the route. You could freeze, starve, or simply wander disoriented in a blizzard until you fell, exhausted; sometimes, the thieves get you too.”

The woman who has been serving us tea—and thus far has been entirely silent—finally stops and watches Yeshi in what I feel is a moment of rapture (or is it my own rapture?). I wonder if she has heard these tales before and whether they matter to her. Perhaps this is nothing but old tales from a time that no longer matters.

As Yeshi harkens to the old days of trade, his massive hands uncoil and clench and uncoil again, as though touching every bend of travel and mountain pass in his mind’s eye. I ask him about tea and its role along the route, and his massive hands lift, palms up.

“Tea was wealth. It was the most important currency for us muleteers. If one had tea one could trade for anything. We were often paid in tea.”

He gently lifts his own well-oiled bowl of tea and smiles, and with that smile his face splits into a thousand different folds of skin. “It still feeds me.”

The winds pick up a little. He lifts his bowl and almost hisses in the remnants of his tea. The quiet woman smiles at this as though she has been waiting for it, and quickly rushes to fill his bowl. ♦

Running in Peru | From Oceanic Wrap-Arounds to High-Altitude Trails!

Loved your way of story telling accompanied by superb clicks! The harsh life of the mountain tribes are summed up beautifully in the lines : ‘The local version of luxury could be an extra bowl of tea, an additional day of rest, or an hour with friends around a fire.’

Love your writing and storytelling Jeff, I felt like I was there

Much appreciate the words Liz. It is a little space and time I often replay in the memory palace.