The food in India is one of the best reasons to go there. From street food to home-cooked to restaurant-served, it simply does not get any better for worthy travellers

You don’t need to study up on curry before sampling Indian cuisine. Instead, just do what the locals do and jump in. The past is always present in India. An amalgam of spiritual sects and cultures, its traditions run deep, and the cuisine is no exception. With techniques and ingredients varying region to region, new colours, aromas and spices are just a train ride away.

India is a vegetarian’s haven. Food is integral with belief: most Hindus don’t eat meat (the cow is believed sacred), Buddhists and Jains are mostly vegetarian, and Muslims abstain from pork. The non-meat dish called dhal (curried lentils, or pulses) is a country staple.

Indians are also experts in layering spices. You won’t come across curry powder in your travels! Instead, Indians create their own blends called garam masala (Hindi for “hot mixture”), where fresh spices are toasted and ground, are added at the end of cooking. Common savoury spices include curry, turmeric, mustard seeds, cumin seeds, coriander seeds, chilli powder; and sweet spices of clove, cardamom, cinnamon and black pepper.

It can be difficult to narrow down India’s kaleidoscope of gastronomies. “There’s regional diversity, and there’s religious diversity, and together they produce a cultural diversity,” says traveller and award-winning world-cuisine cookbook author Naomi Duguid. “You are what you eat, and you eat what you are, in India.” 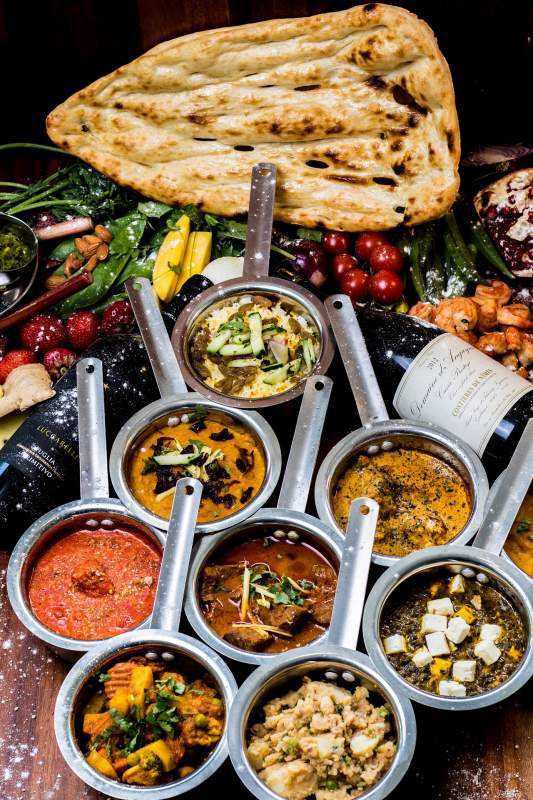 As a general rule, meals are served around a staple of either bread in the north, or rice in the south. In the north, you’ll find Mughlai cuisine remnant of the Mughals, a Muslim dynasty that ruled India until the mid-19th century. Their rich dishes are mostly non-vegetarian, usually stewed meat, often lamb, poultry or goat (if you hear the word “mutton” it usually means goat), and contain ghee (clarified butter) thickened with cream and almonds. The north is also home to the tandoor oven, where delectables like naan and roti (unleavened breads), spicy yogurt-marinated tandoori chicken, chicken tikka and paneer tikka (cheese kebabs) are cooked over coals in a deep clay oven.

Another highlight of the north are Bengali cheese-based sweets such as rasgullas, syrupy-sweet cream cheese dumplings flavoured with rosewater; and sandesh, cheese mixed with sugar or molasses. Llassi, India’s popular cold drink, reigns from the north. The yogurt-based drink is made savory, sweet or fruit-flavoured. Just ensure you know how your lassi was prepared, as the yogurt is sometimes thinned with water, which can be unsterilized in India.

Of course, there are exceptions to these regional trends. “There’s crossover for example, in Bengali,” says Duguid. “They are rice eaters and growers. Gujaratis are also rice eaters, so it’s a bit blurry.” But, as you travel south, you’ll find more rice-based dishes that are lighter, vegetarian and layered with spice, and creamed with coconut milk.

A typical southern meal consists of a heap of rice surrounded by vegetarian curries like dhal or sambar (vegetable lentil stew seasoned with tamarind, chillies and others), as well as chutneys and relishes. And breads in the south are more like rice pancakes. Dosai, a rice and lentil crepe, is a breakfast favourite and southern staple, along with vada, a deep-fried lentil doughnut snack. And there’s idli, steamed rice lentil cake.

There’s also a variety of meat and seafood, which are especially common in coastal regions like Kerala, or the Portuguese-influenced cuisine of Goa, including seasoned kingfish, shrimp, lobster, mussels, crab and tuna. Goan signatures include vindaloo, a hot and sour curry of vinegar-marinated pork or fish with spices; and chouriços, spicy red pork sausages. Though a Mughal dish, biriyani (basmati rice baked with tumeric, saffron and meat, fish or egg) originated in the southern city of Hyderabad. And, for a southern treat, try payasam (called kheer in the north), a seasoned rice pudding.

Just a Matter of Time

To get an authentic sampling, Duguid says it’s best to observe the time of the day. “The most delicious and varied thing to eat on the street is breakfast, and to do that you get up at dawn, or before dawn.” You can enjoy a cup of chai and paratha (a northern flatbread) while wandering the markets.

Generally speaking, lunch is key. “The main meal is at noon,” says Duguid. “Usually there’s a window of about an hour and a half, and then [the food] is gone. The emphasis on clean and fresh means there’s no leftovers.”

For locals, the ideal lunch (or any meal, at that) is home-cooked, which is why you’ll see many eating from tiffin boxes, cylindrical tins with a home-packed meal (“tiffin” means snack). For eating out, go where the locals go. “You want to eat where somebody who is from there would eat,” says Duguid.

Noon is the traditional hour for thali. Originating in the south, thali, Hindi for “plate,” varies from region to region and consists of a sample of dishes and items all in one meal. Served on a metal plate or traditional banana leaf, your thali will likely have rice, a few curry dishes, flatbread, chutneys, relishes, yogurt, pickles and a sweet.

The sauces are often all-you-can-eat, and the dishes vary day-to-day, even in the same restaurant. What’s fresh and available is often what you get.

“If you ate at the same place five days in a row, you wouldn’t have the same thing,” says Duguid. 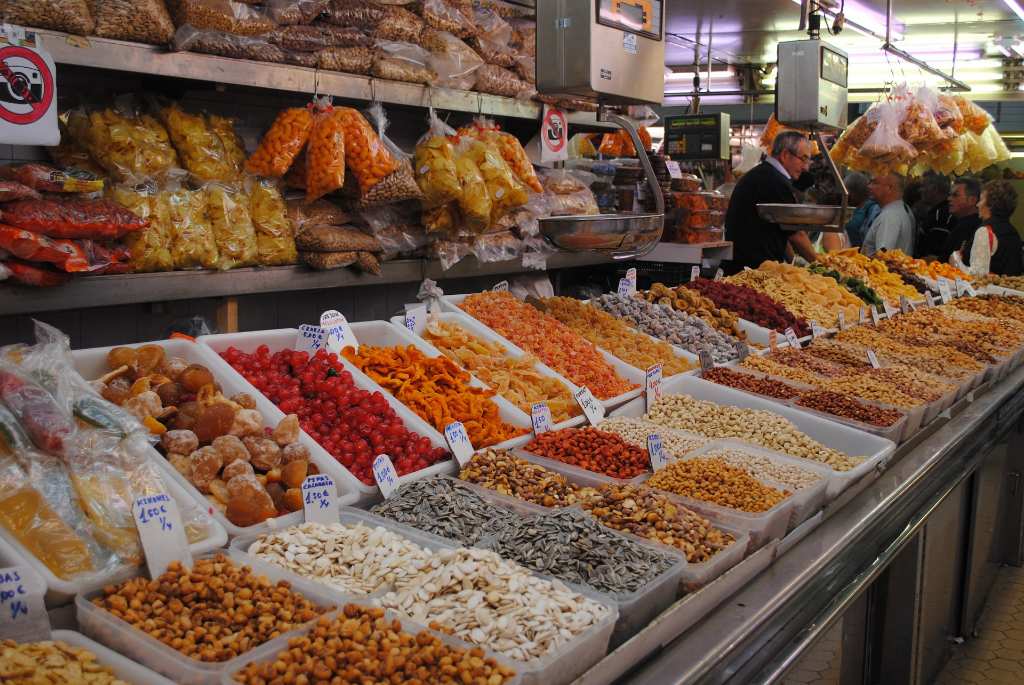 Nothing defines Indian cuisine like its array of colour (Caroline P.-Pixabay)

A Cup or Two of Chai

You’ll never have trouble finding a cup of masala chai (spiced tea). From bustling streets to hidden alleys, there’s a chai-wallah (tea vendor) on just about every corner. And merchants often offer a cup to entice you to their stall or just to keep you browsing.

Aptly called India’s national drink, the tea is made by vigorously boiling tea leaves, milk and water altogether (instead of steeping leaves in hot water, as Westerners do). Flavoured with herbs and spices like ginger, cinnamon, cloves, cardamom and pepper, chai will give you a boost and awaken your taste buds. Adding sugar is also common.

Street Food is an Absolute of an Authentic Indian Experience

While you can mull over curry dishes to gauge the spiciness of say, korma versus a dopiaza, Duguid warns that in India, you don’t order a specific dish as you would in a Western-style restaurant. “The thali just comes, you don’t have a choice. It’s never about ordering a curry. It’s about a meal.” This style of eating can be a challenge for a traveller, especially those worried about hot dishes.

But India has mild dishes as well. “You can have a simple grilled fish with brilliant chutneys,” she adds. “It’s not always about things being cut up and mushed into lots of flavour. Sometimes, it’s sort of clean and simple.” And thali usually comes with yogurt, which helps cool the palate.

Perhaps the best way to sample lip-smacking Indian cuisine is just to wander the streets. “Really, the best Indian food is in the household and the snacks on the street,” Duguid says. Street food is ideal for authentic fare, and perfect for a meandering traveller: quick, cheap and tasty.

Just remember to follow the locals and eat at crowded stalls; ensure the food is cooked hot right in front of you; and avoid snacks in water (pani puris are often served in spicy water, and fruit is often sprayed with water to keep it glistening). Keep in mind that water can be unsanitary in India. Also, be mindful at juice stalls, being sure the vendor presses the juice in front of you.

But overall, Indian food vendors are experts at making specific dishes or snacks, and have taken the time to perfect their craft.

If you’re looking to bring Indian cuisine home with you, know that many locals offer cooking classes in their home, as do many hotels. Mostly available in and around urban areas, look for classes that are hands-on, and where copies of the recipes will be provided. While much of this may sound confusing, the key is not to get overwhelmed. In fact, the best way for a travelling foodie to experience local cuisine is to stay in the moment, and take a cue from locals.

“Go with the flow; eat the way local people do,” says Duguid. “India doesn’t conform with our notions. India is its own place.” Tune in, she adds. That’s really her big message.

Kate Doyle was a member of Team Outpost on our Adventure India report. Currently she's an editorial projects coordinator at Scholastic Canada, who manages up to 300 print and digital projects a year. She loves to write, to empower through knowledge, and to practise her flawless French!