When I lost my glasses in Cuba, I was furious. But it opened me up to creating whole new kinds of memories.

My wife happened to be filming me just after it happened—angry and shirtless, I’m squinting hopelessly at the shallow ground, furiously waving her over to help. She couldn’t hear me, so she laughed at the image. In hindsight, it’s funny; in the moment, I was pissed.

“How bad is your prescription?” Cubans asked me. “Minus four in both eyes,” I would reply. That’s pretty bad. 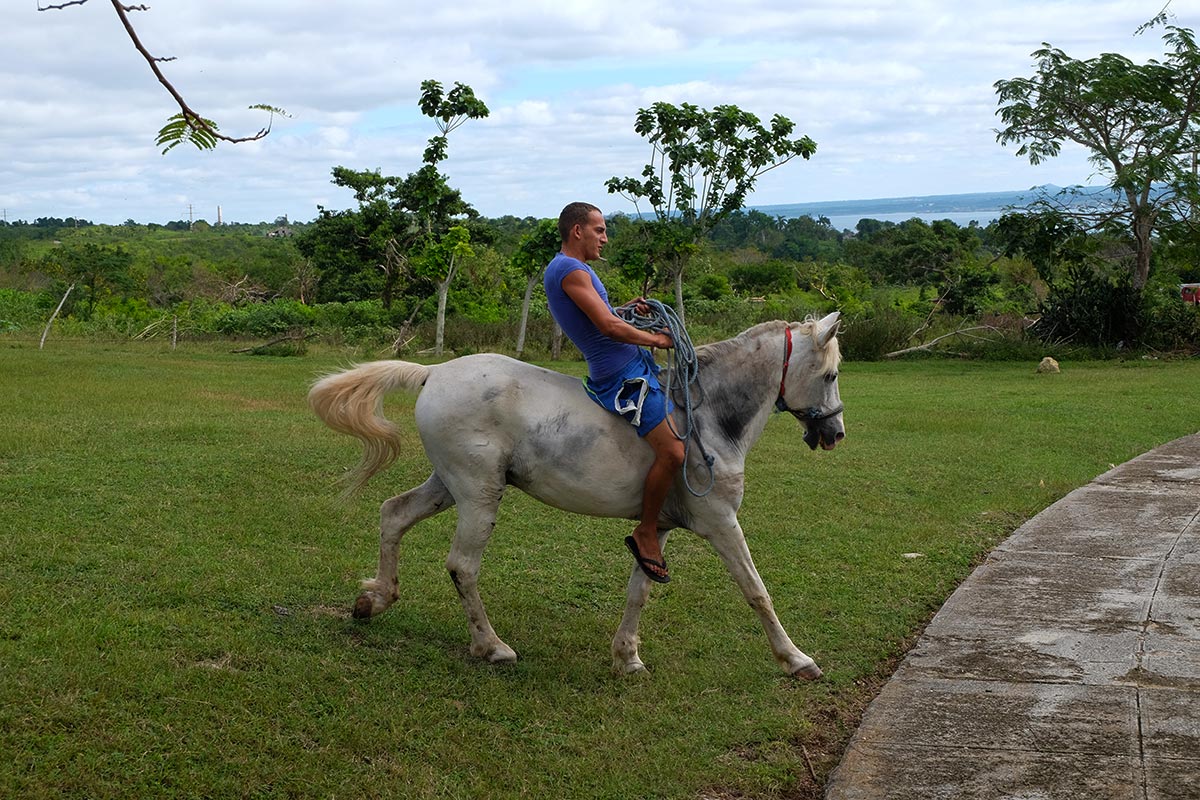 The irrepressible greenness of Matanzas.

So for our last days in Cuba, I was forced to rely on my other senses to guide me: the smells of frying fish, the sounds of Cuban salsa, the tastes of lime and rum, the feeling of soft beach sand between my toes.

We’d planned those final days in Matanzas, an unconventional destination derided by every Cuban we met outside the city. Every jinetero on the street will pester you, asking where you’re going in Cuba; when we told one we were spending just five days in Havana and three in Matanzas, he shot us a look of disgust. “Una mala programa,” he said—which I understood to mean “shit itinerary.” It would be like someone visiting Canada for the first time, spending five days in Toronto and three in Hamilton. Most Canadians would raise an eyebrow. What the hell is there to do in Hamilton? 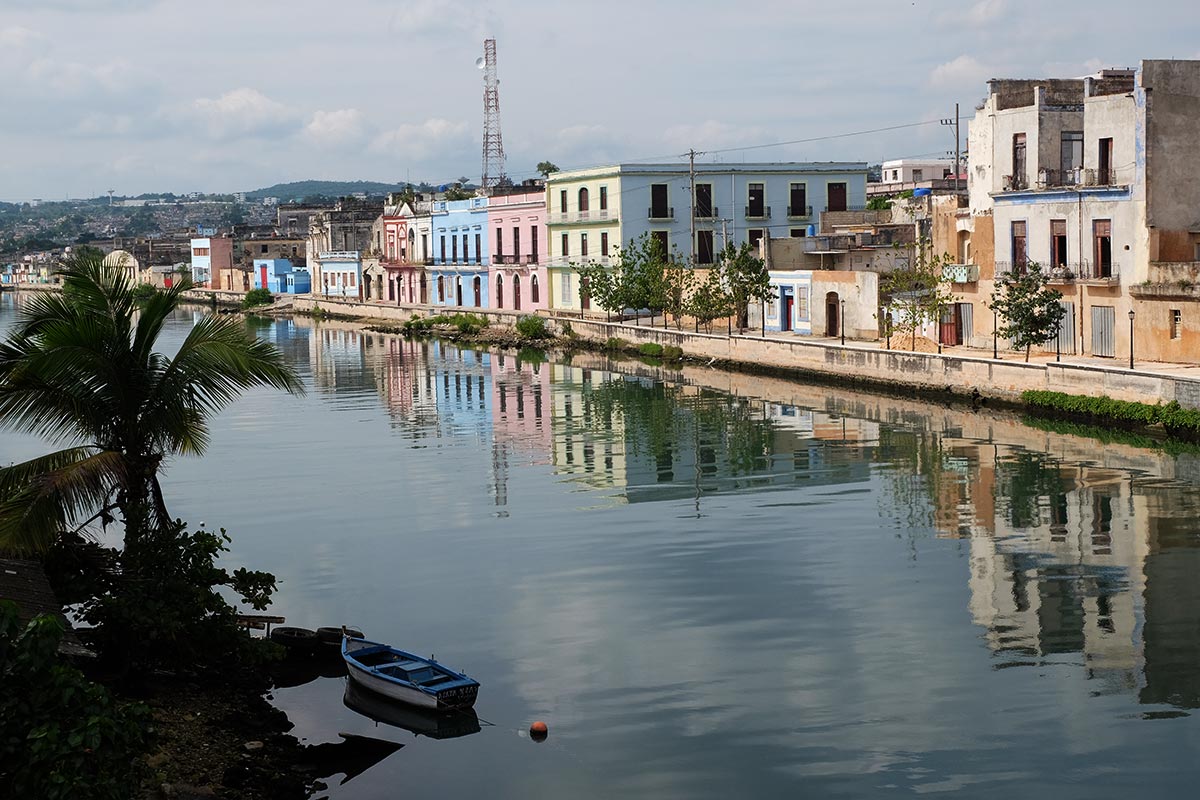 The San Juan river cuts through the bottom of Matanzas’s downtown.

The surprising answer, at least for Matanzas: there’s a lot. You can walk down to the bay and find a small concrete hut-shop selling 750-millilitre bottles of Havana Club (aged three years) for $2.50; you can find a terrific meal—arroz congris topped with shredded cabbage and a juicy, salty slab of lomo steak—for $1.20 in a true hole-in-the-wall joint by the towering St. Charles Borromeo Cathedral; you can sit in the central Plaza de la Libertad, flanked by awesome colonial structures, listening to the cacophony of birds chirping and swooping in the trees overhead.

And, in fact, we did all that before I lost my glasses on a day trip to Varadero, the profoundly touristy peninsula of all-inclusive resorts, velvet-cushy sands and inflated prices. Most tourists stay in Varadero and make a day trip out to Matanzas. We did the opposite. 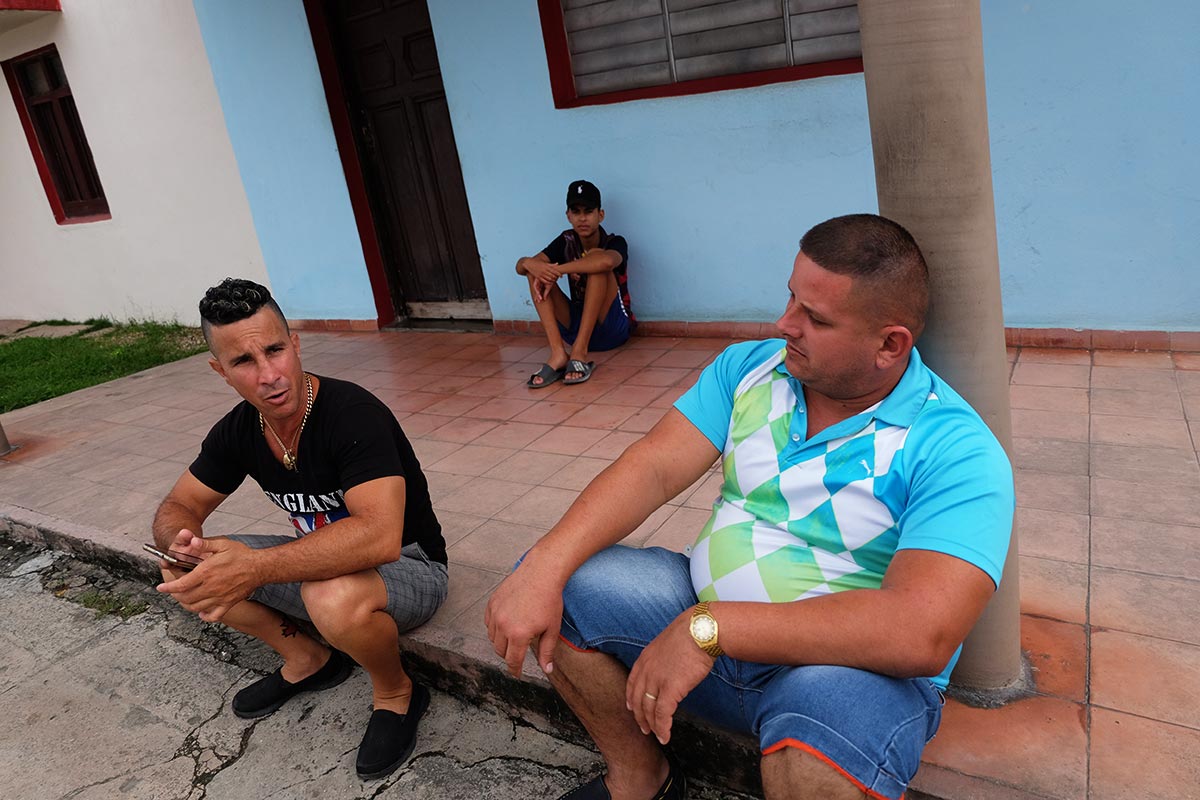 The people of Matanzas are as relaxed and friendly as anywhere in Cuba.

On our final day in the city, we woke up in Casa Manzaneda, our lovely casa particular. (These are private homes owned by everyday Cubans, with extra rooms rented out to tourists, often far cheaper and more rewarding experiences than the state-owned hotels across the country.) Casa Manzaneda’s room is better in person than in the photos: 20-foot ceilings, newly renovated bathrooms, exposed brick columns, baby-blue doors, ’40s-style floral tiles. It’s owned by Felix, who works as a receptionist at an all-inclusive in Varadero, and Danae, his then-pregnant wife.

Danae served us breakfast in their large, sunny courtyard. It was a three-course endeavour she prepared fresh, including cafe con leche, tostados with strongly scented butter and mango jam, fresh guava juice, chopped up papayas and bananas and a Spanish-style omelette folded over with cheese.

From there we walked two blocks to the main plaza to check out the Pharmacy Museum, heralded as the city’s best. The multitude of colourful potions and bottles immediately enamoured by wife, Vee, but in the dim morning light I had to replace my glasses with my camera, and engaged with the whole tour through my electronic viewfinder. The vintage tubs and herbs, used to create medicine at an industrial scale, offer visitors a unique glimpse into the sophistication of natural medicines from two centuries ago. Some of the more pungent herbs have to be stored away in a locked cabinet, but when our guide opened it, a medley of uncontrollable wafts swarmed us. Housed in a 19th-century mansion, the museum tour is comprehensive, but takes all of 15 minutes to finish, and felt far too brief. 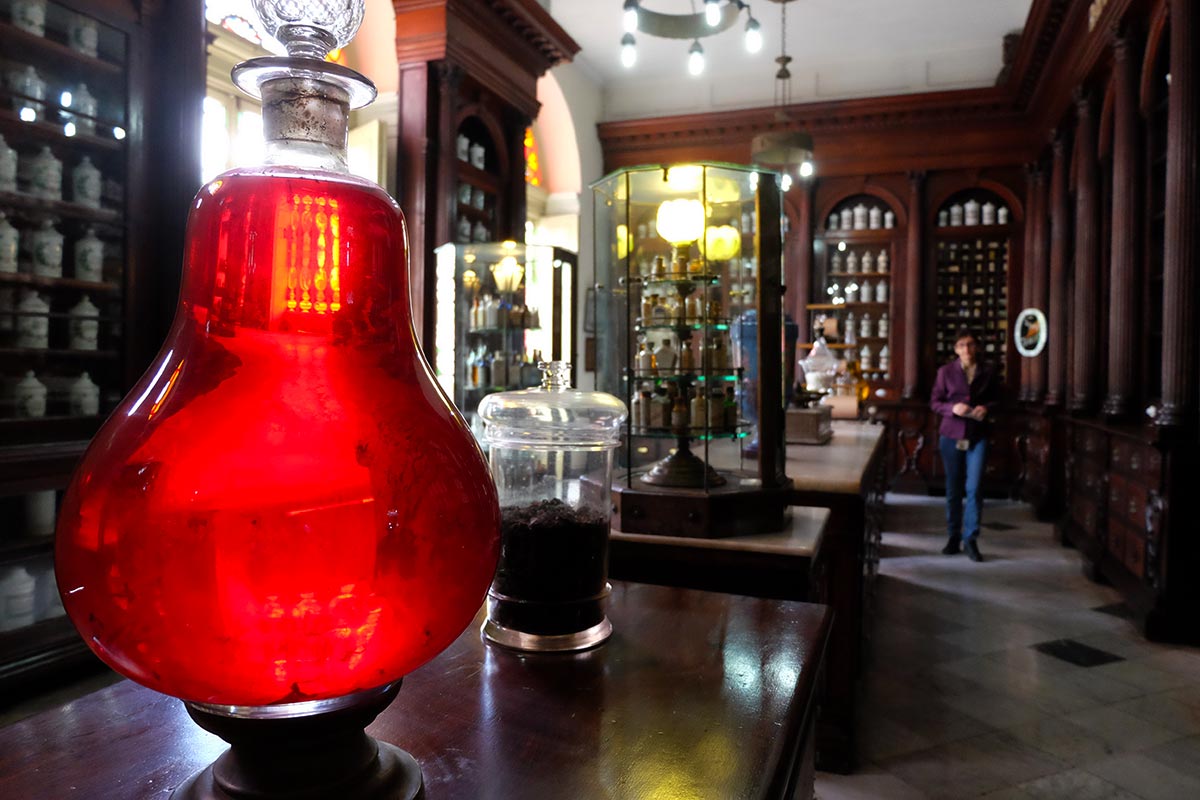 The Pharmacy Museum is filled with strange scents and herbal remedies.

After the museum, we headed north toward the Yumuri River to take in the irrepressible sun and discover more of the real city. We hadn’t gone more than five minutes before overhearing a loud clanging up ahead. Once we got closer, we peered through a window and saw the band—drums, keyboards, congas and a four-woman choir singing about Jesus. It was a church celebration on New Year’s Eve, this final Sunday of the year.

Congregants wore white and danced around the pews, pushing grandmas in wheelchairs and babies in strollers to the music. Catching our eavesdropping, one woman beckoned us in, so we entered, immediately getting kissed on both cheeks and wished a happy new year. They urged us to stay and sit, but we had to go—we had a lunch date at the top of the city. 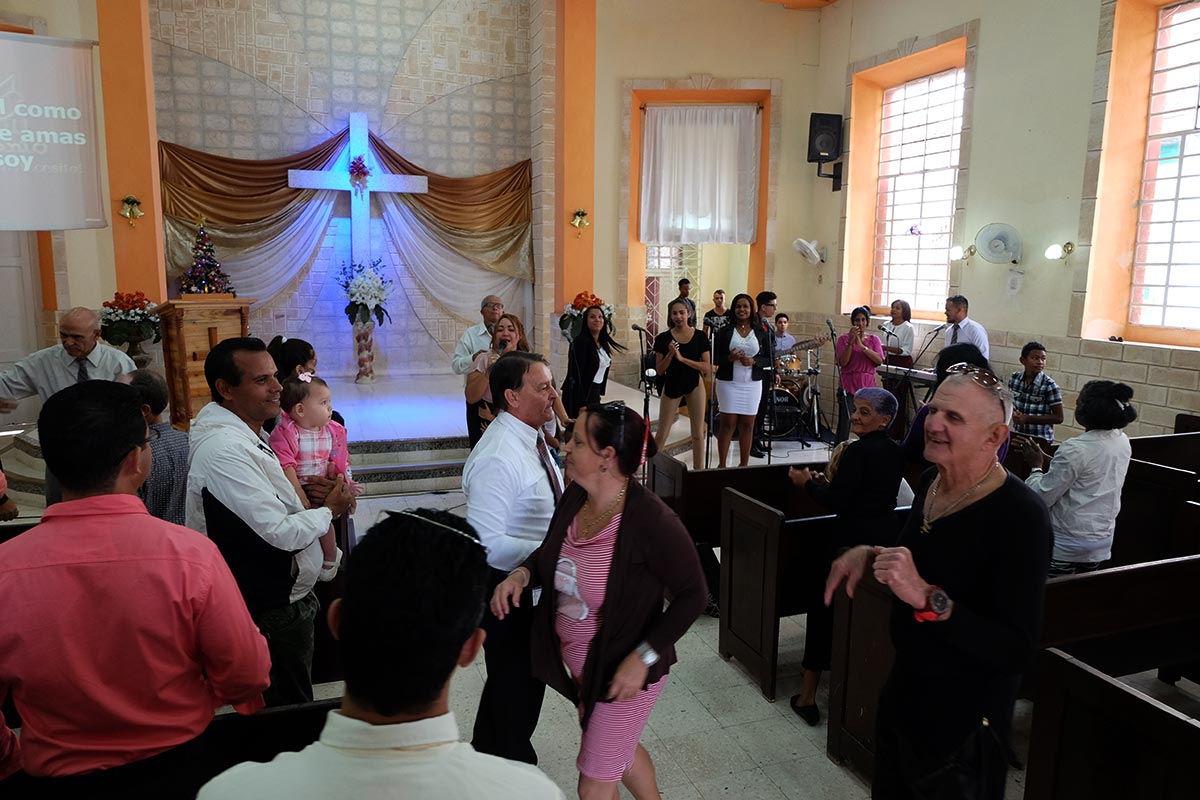 The end-of-year celebration makes for an epic church gathering.

I don’t suppose many people walk to Monserrate, the highest peak of Matanzas, and on the way I figured out why: there is desperately little to see along the way. Few shops, barely any restaurants, open fields of horses and a wealth disparity on full display—homes were either shanty aluminum-roofed affairs or renovated gate-protected forts.

Matanzas is locally called the “Athens of Cuba” for the impressive number of artists, politicians and thinkers to have been born and raised there; in commemoration of them, the municipality has erected plaques around the city showing where these folks were born or lived.

These plaques also mark some of the only attractions in the city, though, and they can get a little obscure, informing passersby that “this local politician lived here until they were three,” rarely marking an invigorating discovery. The town’s overwhelming residential presence crystallizes why so many Habaneros shook their heads at our spending more than a day here.

The neighbourhood of Monserrate, though, renewed our spirits. An hour’s walk uphill from the central plaza, the peak of Monseratte is the highest point in the city, around 120 metres up, perched between the verdant agricultural Yumuri Valley and the blue Caribbean Sea beyond the colonial downtown—all clear and visible, without a tourist in sight. The neighbourhood was once worse off, until locals drummed up enough cash to renovate the neoclassical namesake church, originally built in 1875. We saw goats roaming around the church grounds, while a poor man banged a drum to a vague tune, asking for money. (One irritated middle-class Cuban paid the man to stop playing.) 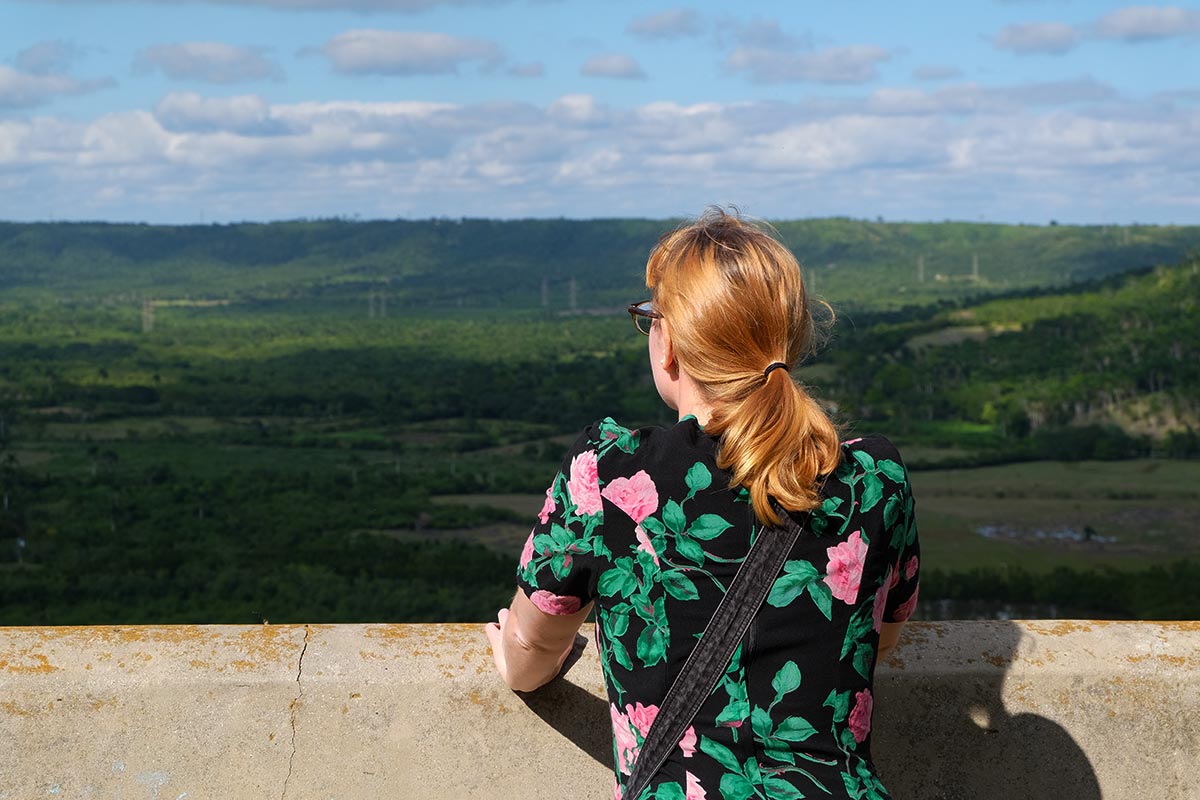 Vee stops to enjoy the view of the Yumuri Valley.

Monserrate’s only restaurant offers meals for under $2, and drinks for even less. But their menu had deceived us: “We only have these two specials today,” our waitress immediately told us with a smile. Such is life in Cuba, where resource and food scarcity snaps you back to reality. Vee and I both ordered carne asada: thin, oily slices of well-marinated beef with sides of rice and beans, salad and two rounds of drinks, enjoying the vista beyond.

On the way down, we saw roads and stone walls ravaged and turned over, as if aimlessly dug up by construction crews. Only later that night, sipping rum and Coke in our casa, would I learn that these are were vestiges of Hurricane Irma, which damaged some parts of Cuba worse than others. Matanzas, by and large, was spared—except for the parts that weren’t, like the unobstructed hills of high-up Monserrate, which may not see a full recovery for years due to the country’s fragile economic state. 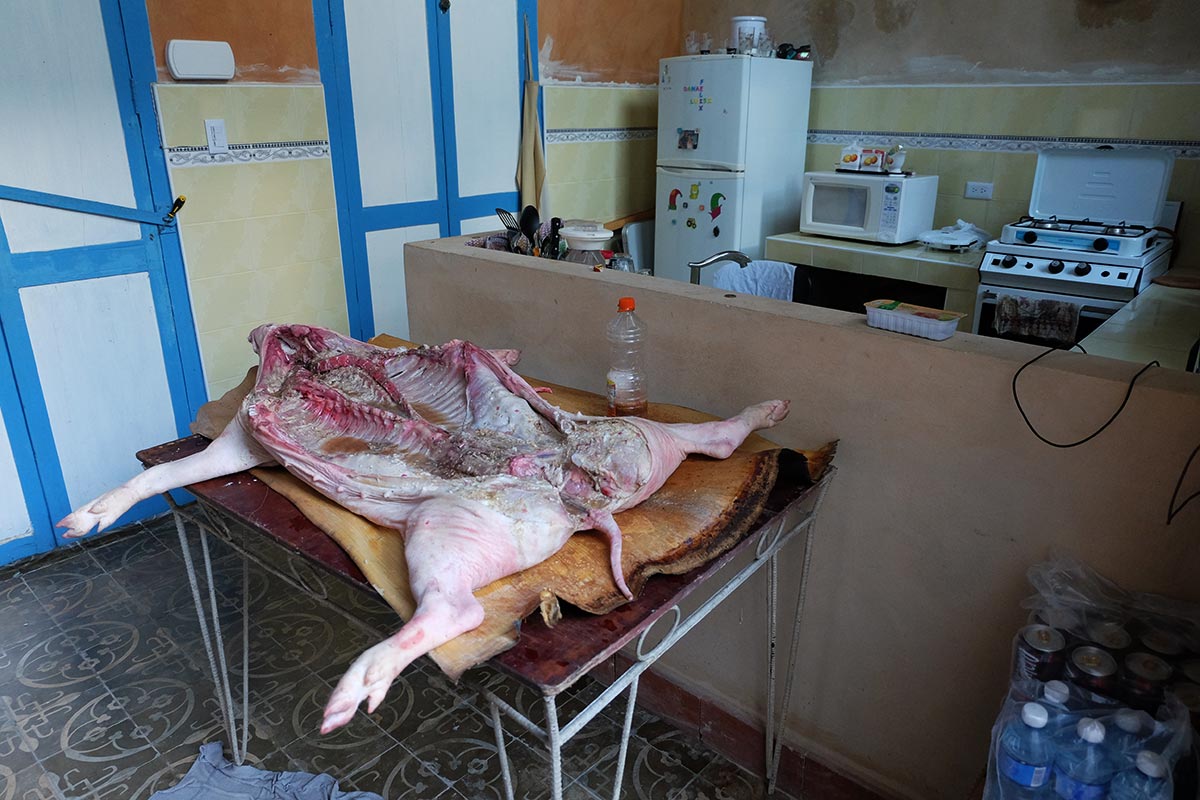 Just in case you forgot it was a special night for dinner.

I learned all this back at our home base of Casa Manzaneda. New Year’s Eve is a major holiday in Cuba—on top of the obvious celebration, January 1 marks the Triumph of the Revolution, when the former president-turned-dictator, Fulgencio Batista, fled the country on December 31, 1958.

So Felix and Danae invited Vee and I to join their family in celebration, which included endless alcohol, eight hours of roasting a flayed pig, a grand dinner and nonstop music.

Danae’s father, friendly and talkative, informed me about the hurricane, which eventually turned into a roundtable political discussion with the rest of their family.

Felix played the role of DJ, flipping songs on the stereo system until he found one he liked, usually a tune to which he and Danae could show off their salsa moves in the stone-laid courtyard. Having just taken three hours of classes in Havana myself—which ended abruptly, when my teacher’s boss showed up and reprimanded my teacher for snagging private lessons without her knowledge—I grabbed hold of Vee (who actually knows how to salsa) and shimmied to the pop music, one two three, five six seven, while Felix laughed and outperformed us. 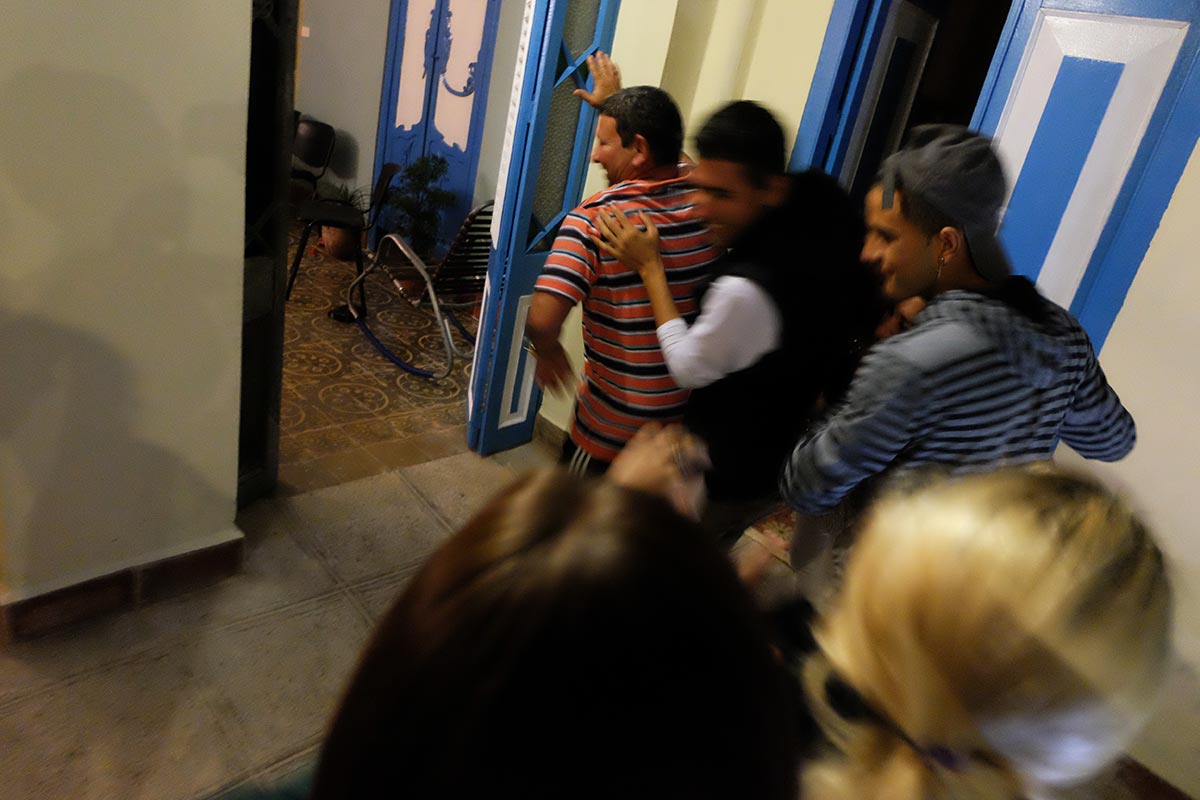 Later on, after the debates had died down and everyone (certainly I) got sleepy from too much rum, Felix grabbed a bucket of water and explained that it was Cuban tradition to toss it out at the strike of midnight—a washing away of old sins to make way for a brighter future. At 12:03, realizing we’d missed midnight, Felix rushed everyone to the door and tossed the pail. Sure enough, I noticed wide pools of water in front of neighbouring doors.

Waking up the next morning, I knew I wouldn’t have any clear visual memories of Matanzas, let alone that New Year’s Eve—unrelated to the musky rum-and-Coke flavour lingering in my mouth, being without eyesight made the party even blurrier.

But I was glad that I didn’t let the loss ruin the rest of my trip. After all, the memories I do have are vivid: I can still hear the church band clanging away down the cobbled streets; I can feel my feet moving to the salsa sounds in Felix and Danae’s courtyard; I can smell the bizarre herbal remedies in that rustic mansion museum; I can taste the marinated meat from the highest perch above the city. I may not have been able to see it very well, but I remember it all vividly. *

China’s Transit Visa: A Complete Guide to a Confusing System