If you’re planning a road trip across the Caucasus Mountains of Georgia, spring for a car with four-wheel drive.

Story and Photos by Chris Mitchell

We found ourselves deep in the forests of Georgia with snow pouring down in waves. Our car struggled to gain traction on the icy paths, and we wondered whether there was a person within 100 square kilometres of us.

The journey, which ended there, started innocently enough with a quick flight to Tbilisi, Georgia’s capital. Tbilisi is a place that, even if you haven’t been before, will feel oddly, beautifully familiar. I largely attribute that feeling to how upfront, real and unapologetic the city is.

At the time, my fiancée and I lived in Istanbul, which wasn’t all that far away. We’d come to appreciate Georgian cuisine, as we frequented an incredible Georgian restaurant—a small second-floor room above a dodgy bus station—that made their own moonshine and didn’t have a menu. We booked our flights on that preview alone.

Upon arrival, we rented an SUV from a small shop in Tbilisi and headed off toward Kazbegi, also known as Stepantsminda. It’s a small town in the northeast known for being the most scenic spot in the Greater Caucuses Mountains, and it lived up to its reputation. The roads on this route were more “major,” but still decidedly treacherous. In short, there was no way we were making it there in anything other than a car with four-wheel-drive capabilities.

We had heard stories of winter driving in Georgia, but decided that the warnings were likely overblown. We still felt relatively confident of that notion when we arrived in Kazbegi, but later, that intial thought would be disproved over and over again.

At one fateful point, we were driving up a steep wintry road when a dirt-covered truck came tearing down the hill. We passed each other on a narrow hairpin and I swerved at the last minute to avoid his back tires, which were roughly the size of our vehicle. I skidded to the edge of the road and looked ahead only to note the several-thousand-metre drop. The clouds, not far from our windshield, floated by with indifference, and we caught our breath. It’s in those moments that my fiancée, Briana, and I would lock eyes, recognizing we were in over our heads.

We soldiered on, and each successive near miss became something only to laugh and shake our heads at, because what else can you do? 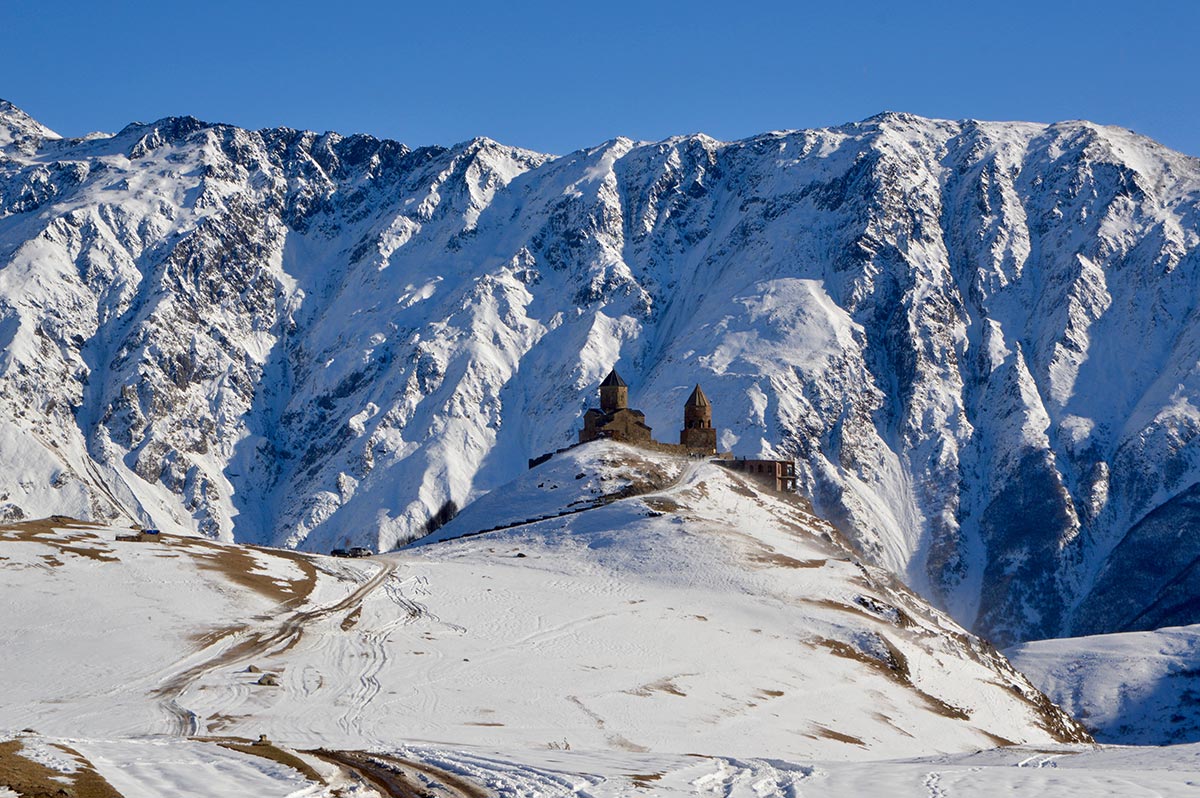 And yet, it wasn’t all bad. The views on all sides were stunning and we began to realize that Georgia redefines notions of what untouched beauty can be. Inspired by our foray into Georgian cuisine in Istanbul, we stopped wherever we could to dive into Georgian delights. We ate khinkali, a heavenly dumpling often filled with meat and other delights and khachapuri, a Georgian-style pizza. We filled up on mtsvadi, a Georgian meat delicacy, at roadside stops where English was useful, and a smile went a long way.

We were nothing short of relieved when we finally arrived in Kazbegi. The town itself was relatively barren, but the scenery was awe-inspiring. Not learning from lessons of the previous days, we made the attempt to drive up to the summit of nearby Mount Kazbek—but about a quarter of the way up, our overconfidence was again put in check. We ended up on the side of a snowy path, not sure if it was better to truck onward or back up the entirety of the ground we gained and accept defeat. 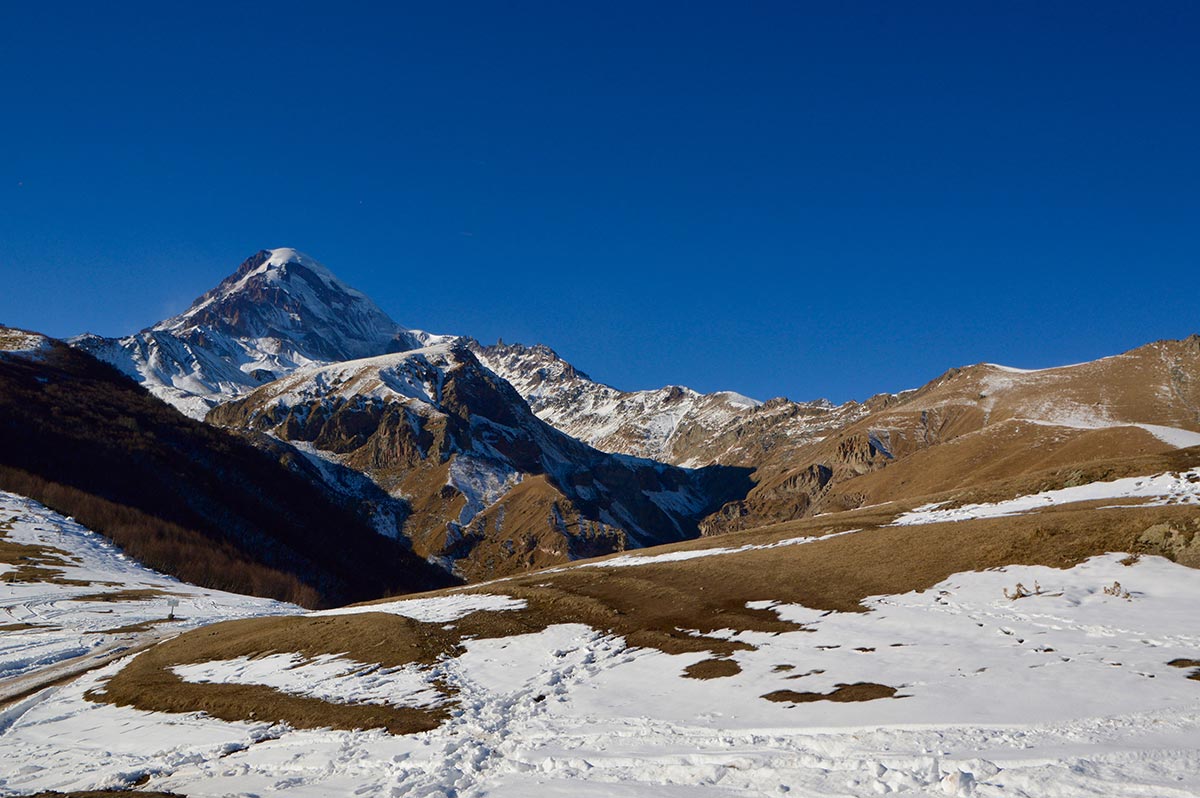 At the top of Mount Kazbek.

In the end, we quite literally backed down the mountain, our proverbial tail between our legs. When we later hired somebody to take us, we were greeted with some of the most stunning views on the planet, but also the realization that winter driving in Georgia is best done by Georgians with chained tires, and not two Canadians with an SUV a little too much optimism.

After two nights we headed toward the town of Artana, in the wine-making region of Kahketi. We crossed through flowing streams, up muddy inclines, on glorified paths and along literal mountainsides. We drove on roads under construction, and roads that should have been under construction. Each time we got through one section, we’d breathe a collective sigh of relief, only to look around the next bend and begin holding our breath again.

Somewhere in between Kazbegi and Artana, as we entered a thick forest that was reminiscent of something from a science fiction novel, panic began to set in.

We hadn’t seen a person in a long while, and the road was nothing more than a snow-laden path under a canopy of dark, foreboding trees. Our cellphones had no service, and what really stirred our emotions was the acceptance that the margin for error was nil. We were, admittedly, in over our heads yet again, and thus I gripped the wheel with white knuckles. I tried to play the role of confident flight attendant, as Bri played the role of concerned passenger.

Turn after turn, the tires struggled for grip. The car was quiet, but not nearly as quiet as the forest that surrounded us. You start to concoct all sorts of future headlines in your mind as you think of things fatalistically: you sense you’ll be all right, but you also know you might be wrong. We started making promises to all sorts of gods under our breaths. 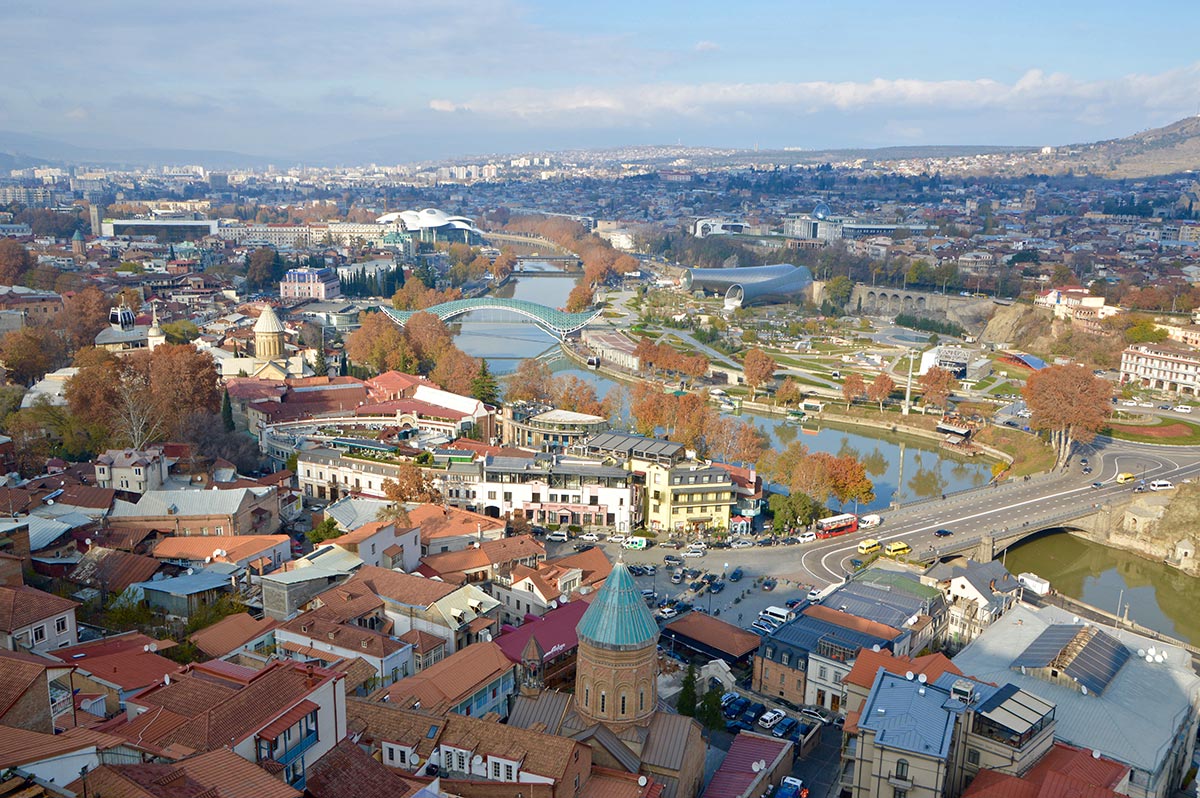 Overlooking the fairytale town of Tbilisi.

We listened to upbeat podcasts to distract us from the situation at hand, and both put on our best false smiles. Suddenly, as if a prayer answered, a car peaked its lights through the brush. A small family was driving toward us, and they stopped when they noticed just how out of place we were. I played the role of mime and tried to ascertain where the next town was; our new friend played the role of saviour in noting it was just around the bend. We cursed Google Maps, thanked our lucky stars, and put the car into motion.

The town wasn’t anything to make note of, and it’s possible that we were the first tourists to ever have graced the place with our presence, but you’ve never seen happier travellers in your life. Though the town was industrial and grim, all I saw were sunshine and rainbows.

Travel, I’ve come to understand, is about respecting the challenges that lay in your path, but also accepting your own limitations. I’m grateful for the stories I’ve created—but I have a lot more stories I want to create.

I stand firmly by the quote I’ve got tattooed across my ribcage, “Man cannot discover new oceans unless he has the courage to lose sight of the shore,” by Andre Gide. Yet I also respect a quote by Abe Lincoln: “Give me six hours to chop down a tree and I will spend the first four sharpening the axe.”

In travel, as in life, there are moments where its best to let things the tide move you, but sometimes you receive a timely lesson that living life on the edge is only fun when you don’t tragically topple over it. **

Chris is a Canadian writer whose love of travel blossomed at the age of 16 when he left for a writing course at Trinity College in Dublin. Today he's an internationally published travel writer and photographer who has travelled to 75+ countries, and has tried to capture some of that along the way.