From high-priced gondoliers to restaurants handing you exorbitant bills at the end of meals, one of Europe’s hottest destinations still thrives.

The floating city of Venice is sadly renowned almost as much for ripping-off tourists as it is for its canals and gondolas. From high-priced gondoliers to restaurants presenting unbelievably exorbitant bills, one of Europe’s hottest tourist destinations seems to thrive despite its dubious reputation.

The latest bad publicity to befall the Queen of the Adriatic was the bill presented to four Japanese students who had the temerity to actually want to eat in Venice. For their meal of steak, dried fish and a few glasses of water, they had the privilege of being billed no less than 1,100 euros (almost $1,700 CDN!).

So bad was this act of gourmet gouging that even the mayor of Venice blasted the restaurant near St. Mark’s Square, and called for an end to such highway banditry.

The Japanese visitors were so shocked by their bill that when they returned to Bologna where they are studying, they reported the incident to the local police. From there, the story went viral and their cause has been taken up by Venice civil rights organization Gruppo 25 aprile.

Unfortunately, this is only the latest such incident. Several months ago, a British family received a bill for 526 euros ($800 CDN) for a seafood lunch that included oysters priced at 5.50 euros ($8.40 CDN!) each, which they claim they didn’t even order and just assumed was part of their meal.

Sadly, Venice doesn’t have a monopoly on ripping off tourists—practically anyplace that attracts tourists also attracts rip-off artists, and few inveterate travellers have avoided every scam and over-charge going. What makes Venice different is that the local people and authorities are as tired of these complaints as the tourists themselves, and efforts are underway to clamp down on dishonest merchants.

Venice is one of my favourite places on earth! I’d heard all the negatives about the crowds, the smells and the exorbitant prices, but still wanted to see it for myself. The hotels were insanely expensive and the youth hostels cost as much as a decent hotel in another city, but eventually I found a beautiful B&B in a palazzo overlooking a quiet canal about a 20-minute labyrinthine walk from St. Mark’s Square. 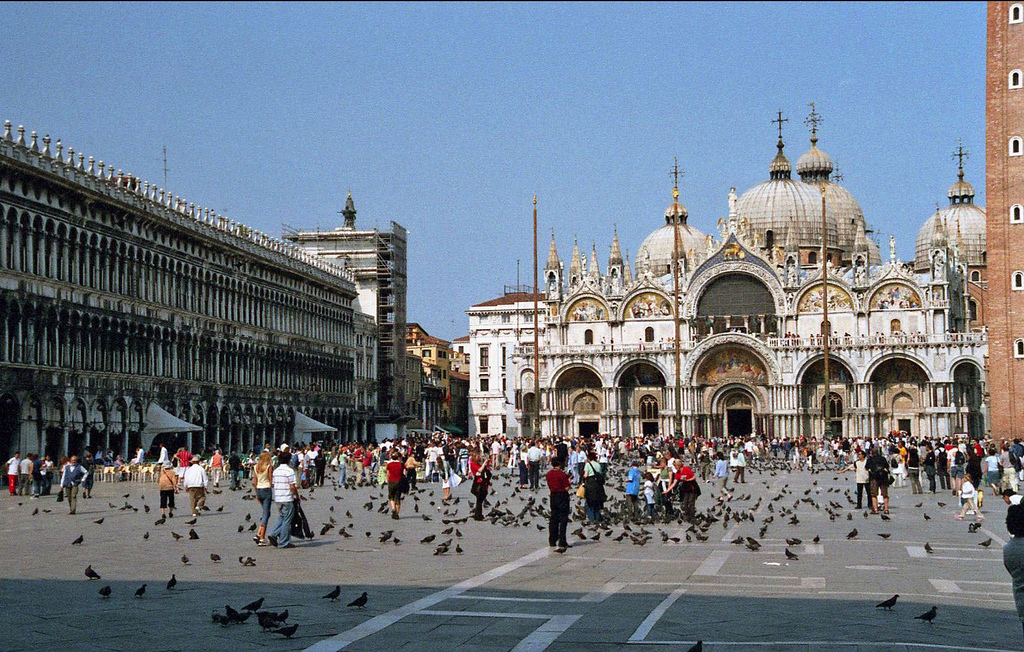 Stunning St. Mark’s Square, Venice, Italy: where the pigeons hang and a cup of coffee will set you back a house! Definitely worth it. (Credit: Simon Vaughan)

Waking to the sound of church bells and the whir of outboard motors as small boats navigated their way down the canals was just idyllic, not to mention the breakfast spread of cold cuts, cheeses, fruit, cornetti and fresh coffee. The owner of the B&B provided my wife and I with tips on where to eat—and where to avoid—and how much to pay a gondolier.

Over the coming days we seemingly covered every square of La Serenissima (Venice’s legendary nickname, which translates to “Most Serene Republic”) on foot or by vaporetto (water bus), and fell madly in love with the city and the occasionally-curmudgeonly Venetians.

Our evening meals were taken at small restaurants off quiet piazzas well away from the main tourist drags. Most of our fellow diners were local, and the staff were always very friendly and welcoming. The food was superb, the prices reasonable. Lunch was usually a panino, pizza al taglio (pizza by the slice) or something similarly quick and inexpensive. We’d grab it from a small kiosk or café frequented by locals, and we’d eat it propped up against a nearby wall.

The only negative lunch experience came when we were reprimanded for helping ourselves to an extra napkin!

We did decide we simply had to have a drink at one of those umbrella-table patios in St. Mark’s Square. We knew it would cost an arm and a leg, but figured it was worth it to sit there in the morning sunshine just one day and gaze across the square and out toward the water. My wife had a cappuccino, while I revelled in one of my favourite travel treats: those ice-cold tiny bottles of Coke in the condensation-lined heavy glass bottles. Our indulgence set us back 25 euros, but it was worth every European cent—even if it was the same price the dinner-for-two had cost us the evening before!

Finally, we took the ultimate financial plunge and went for our gondola ride. Was it expensive? Yes. But the gondolier’s price was pretty much exactly what our B&B host had said we should expect to pay, so at least we knew we weren’t being ripped-off.

Again, the experience was worth every single cent. So, is Venice a rip-off? Like a lot of places, the more touristy your hotel or eating place, the more likely you will be to be ripped-off. However, if you do some research and a bit of walking, you can eat like a Doge without handing over all your Ducats!

While the local residents and authorities do their best to shut down the dishonest establishments, perhaps the quickest way of putting them out of business is for we travellers to simply avoid them altogether. Check the Internet for restaurant reviews (paying particular attention to comments about cost), and venture as far away from the tourist drag for meals as possible.

You’ll not only have an amazing experience in one of the greatest cities on earth, amid some of the nicest and friendliest people who dare to walk it—you’ll save yourself a fortune too! **