Cycling the Spectacular French Pyrenees | No Life Like It

For a Tour de France racer, the Pyrenees are punishing. So for the traveller, soft pedalling is the way to go.

Story and Photos by Kate Doyle

I’m surrounded by the snowy peaks of the French Pyrenees, but I can’t even breathe in the crisp mountain air. Instead, I’m cycling up the Col du Tourmalet, and huffing and puffing with every pedal. Standing at a thigh-wrenching ride of 2,115 metres, it’s the highest road in the region and a Tour de France staple climb.

For her, the Tourmalet is just one leg of the Tour’s arduous stages. Now retired, Clignet began cycling at the age of 22 when she was diagnosed with epilepsy and lost her driver’s licence.

Placing second at the 1993 Tour Cycliste Féminin International de l’Ardèche (the unofficial women’s Tour de France), and winner of six world titles and two Olympic silver medals, Clignet makes the ascent seem effortless. If only I could muster half of it myself.

Stretching the Spanish border, the Pyrenean roads wind and weave into mountain clusters. It’s no surprise the region has hosted the Tour for more than a century. Last year it was the Cugnaux-Luz-Ardiden and Pau-Lourdes stages that were part of the approximate 3,400 kilometre race. 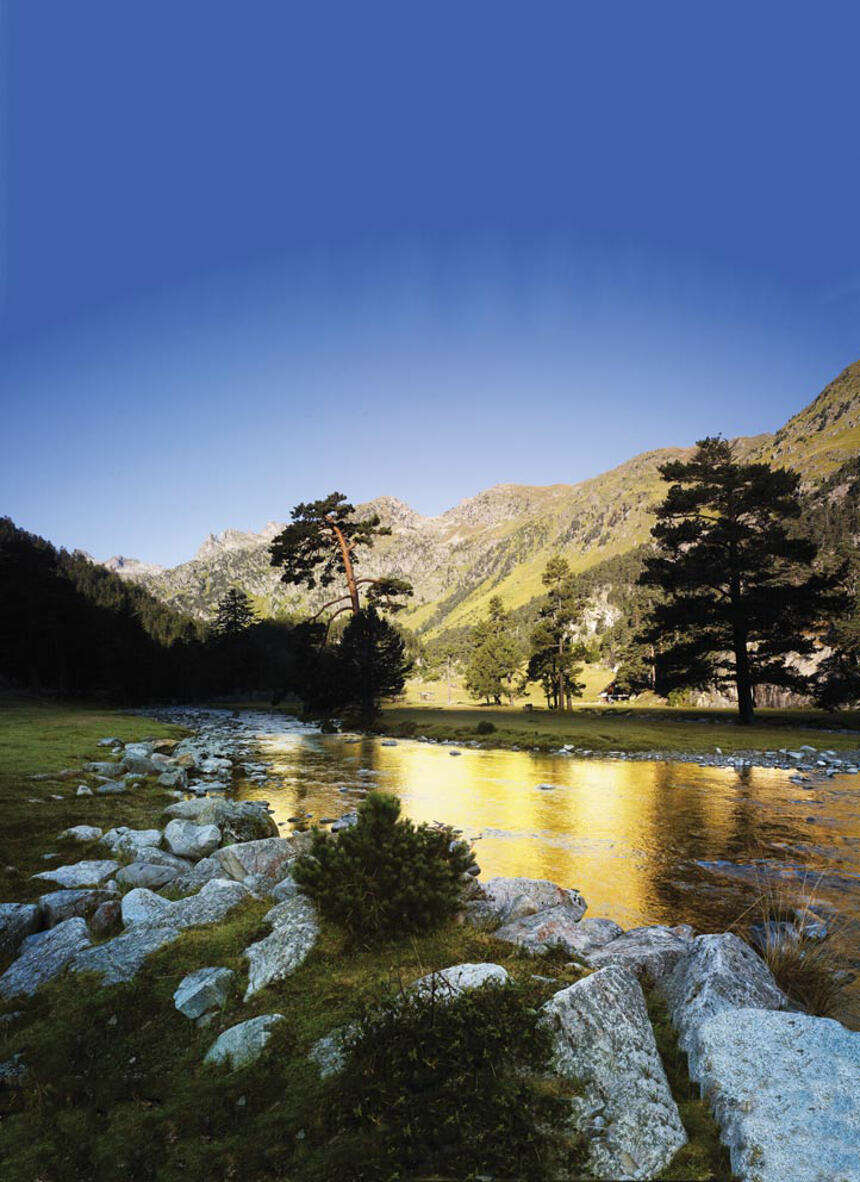 The majestic beauty of the French Pyrenees.

“It’s the mental stage,” says Clignet, describing the beginning of the Cugnaux route (where she herself lives), when the mountains come into view. “The first few climbs show the battle of who will be in the top five, as riders have to jostle into a good position.”

Another challenge to the riders’ risky passes is the famed vent d’autan—the region’s hot, dry wind that blows from the Mediterranean Sea and can gust up to 80 kilometres an hour. While the pros have to race by the scenery, as a traveller, you’ll want to take advantage of the natural and breathtaking sites.

The Pyrenees’ high season is July and August, so your best bet is to visit during fall or spring, and the Cirque du Gavarnie is a must-see. About 50 kilometres from Lourdes, it’s a UNESCO World Heritage site, and was a source of inspiration for some of France’s great artists. Famed writer Victor Hugo called the circling mountains “the colosseum of Europe.”

In the heart of the Pyrenees National Park, the three summits of Mont Perdu at 3,352 metres, Marboré Peak at 3,248 metres, and Taillon at 3,144 metres, frame a spectacular view, including one of the world’s tallest waterfalls, Le Grande Cascade de Gavarnie.

For a more panoramic view, there’s the Pic du Midi. About 40 minutes from Bagnères-de-Bigorre, a cable car takes you up the 2,877 metre summit. Once reserved for scientific research, there’s an observatory and astronomy-themed evenings for stargazing. (For best views, go in the morning when the mountain air is clear and crisp.) 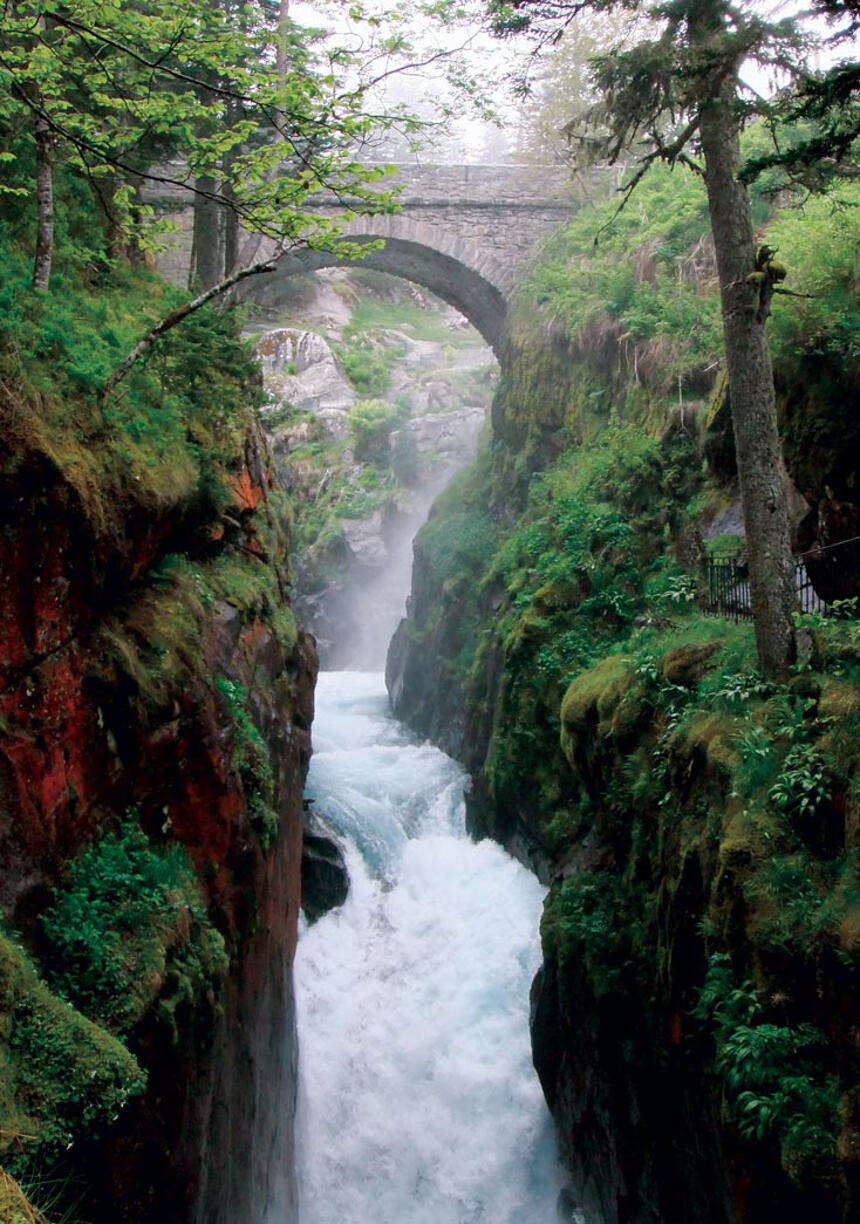 The stunning beauty of Cerisey waterfall.

For the more adventurous, consider opting for downhill skiing or mountain biking. If you’re in the town of Cauterets, explore the historic Pont d’Espagne (Bridge of Spain).

Straddling mossy cliffs, the Cerisey waterfall gushes through an old footbridge and though located a distance from the actual border, it once served as a mule route to France’s southeastern neighbour. If you can, continue hiking to Vignemale, one of the highest mountains in the French Pyrenees (at 3,298 metres), which towers over the turquoise waters of Lac de Gaube.

Though a car took me up the rest of the Tourmalet, I still felt invigorated—if not just from the breathtaking view.

Whether you’re up for the challenge of the climb or you’d rather a more scenic route, several options are available.

“For bikers who are just starting out, there’s a lot to do,” says Clignet. “The Pyrenees are vast. You can ride uphill, downhill or on the flats, but the ideal place would be the valleys.” She suggests riding a compact gearing bike with a 34/48 chain ring. “That gives you enough suppleness to pedal, and to always have a back-up if your legs are tired.”

If you are going to brave a major climb, it’s best to go early in the morning in summer; and, if it’s a long trip, you may want to travel to the location by car the day before and start your ride early the next day. 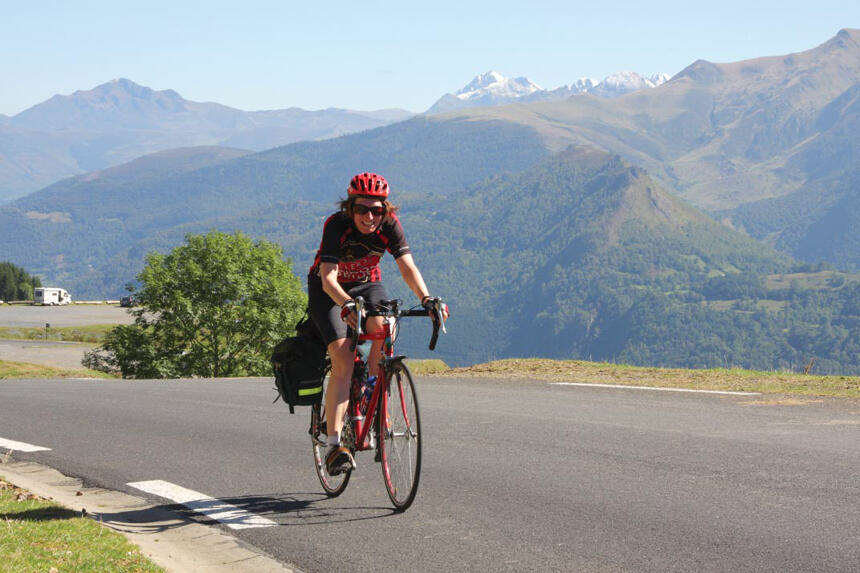 For a novice route, try the Voies Vertes des Graves (at 27 kilometres). The green path goes through the heart of the Pyrenees, with many sites along the way, including a medieval tower, nature reserve, mountain peaks, and the riverbanks of Gave de Pau.

For the more active cyclist, take the route through Aveyron, home to 10 mountain towns classified as France’s most beautiful villages. At a length of 700 kilometres, the route is divided into seven stages, with an average altitude of 1,451 metres.

No longer battling the climb, I take a deep breath and admire the view: lush green pastures, misty peaks, and clusters of charming stone cottages, their slate roofs glimmering in the sunlight—definitely worth the struggle.

Kate Doyle was a member of Team Outpost on our Adventure India report. Currently she's an editorial projects coordinator at Scholastic Canada, who manages up to 300 print and digital projects a year. She loves to write, to empower through knowledge, and to practise her flawless French!

Humpty Dumpty Sat on That Wall, Too

What it’s Like Winter Camping in Gatineau Park, Quebec